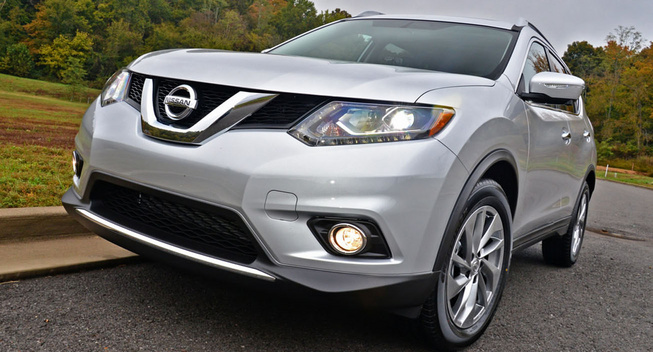 Sometimes, the name’s just all wrong. But it doesn’t necessarily mean the vehicle is. 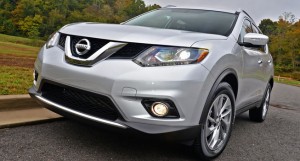 A rogue, that is.

Rogues are lovable but also raffish and untrustworthy; they tend to make promises they can’t or never intended to keep. They often do unexpected – and frequently obnoxious – things.

None of which this Nissan will ever do. 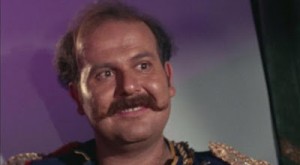 What it will do is pleasantly surprise you with its available third row – a rarity among compact-sized crossovers in the just over $20k class. Its plusher-than-most ride quality is another plus – though (again) far from roguish. Ditto its modest appetite for fuel: 33 on the highway for the FWD model. This is as good or better than two-row-only crossovers such as the just-updated Honda CR-V and Toyota RAV4.

Both of which also cost more, by the way.

So, the Rogue has many admirable qualities.

But don’t hold that against it. 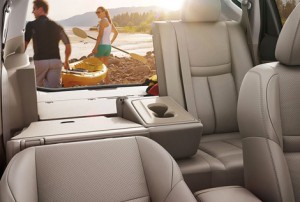 The Rogue is Nissan’s compact crossover, about the same overall size as others in this segment like the Toyota RAV4 and Honda CR-V, but differing from them in being available with third row seating and room for up to seven rather than just five.

Possible cross shops include the Honda CR-V (base price $23,320), the Toyota RAV4 (base price $23,680) and – if sportier is your primary criteria – the Mazda5 (base price $21,545). It’s one of the few compact crossovers that’s still available with a manual transmission – and its personality is definitely a little roguish.

But like the CR-V and RAV4,the Mazda’s also a two-row-only deal.

To enhance fuel efficiency, a driver-selectable Eco mode for the standard CVT automatic has been added to all trims.

Nissan is also holding the line on prices. The ’15 Rogue’s MSRPs across the range are the same as the 2014 Rogue’s – which ought to help its competitive position relative to rivals. 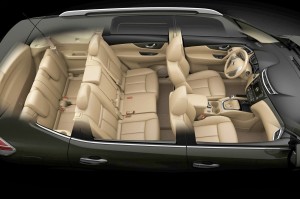 If you’re looking for a rogue, this isn’t it. (Go check out the Juke instead.)

Third row is extra-cost and only offered in the higher trims.

Seat heaters are typically Japanese – they warm rather than heat. 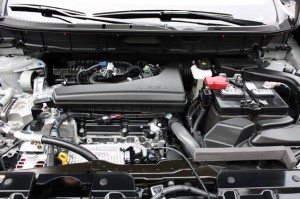 The emphasis here is economy – notwithstanding the vehicle’s name and Nissan’s reputation as one of the sportier brands.

Mash the accelerator to the floor and the Rogue can reach 60 MPH in about 9 seconds, depending on the configuration (FWD vs. AWD; the slightly lighter FWD version is the slightly quicker version).

This is absolutely adequate for everyday driving – and absolutely competitive with the performance delivered by its rivals. That it’s not especially roguish acceleration seems to be of no concern to buyers so far. The Rogue is currently Nissan’s second-best selling model. 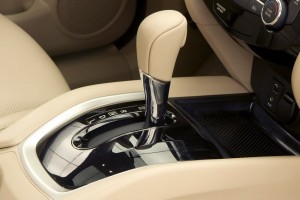 Perhaps because its gas mileage is excellent – especially when viewed in the context of room.

And none of the foregoing competitors are available with a third row.

The Rogue’s optional AWD system also has a bit more capability than several of its rivals – including the RAV4. In addition to a driver-selectable “lock” button that routes more engine power to the rear wheels, there is also Hill Descent Control and Hill Start Assist – two features that will come in handy on snow days.

You can also order run-flat tires, another unusual feature in this segment. It is included with the third row seating package (which eliminates the otherwise-standard spare tire, for the sake of cargo capacity).

The Active Trace Control – standard in all trims – is an enhanced stability control system that uses automatic/selective application of braking force at individual wheels to maintain the vehicle’s line through a curve. This is similar in principle to other stability control systems on the market, but the difference is the engagement is subtler. Warning lights don’t flash on the dash – and there’s very little sensation of brake force being applied.

The system works in concert with Active Ride Control (also standard in all trims) which mutes oscillations when driving over bumps/uneven surfaces. 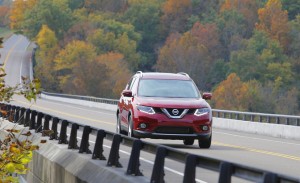 As mentioned above, acceleration is not Saturn V-ish (much less roguish). But the power-to-weight ratio is respectable (170 hp and 3,400 pounds is about the same power-to-weight ratio that my ’78 Z28 Camaro had) and Nissan’s superb CVT automatic (they arguably make the best in the business) does a fantastic job of making the Rogue feel confident and relaxed when accelerating in everyday driving. The revs climb – and then fall back – as in a car with a conventional automatic or manual transmission that proceeds forward through series of shifts. Only in the Nissan, there are no shifts as such (CVTs don’t have fixed shift points or gears to change) so the Rogue simply builds speed, very turbine-like.

Even in Sport mode – which causes the CVT to respond more aggressively – the absence of shift-shock permits WOT merges without worry about sloshing your coffee all over the place.

But the quality that sets the Rogue apart from its rivals more than anything else is its ultra-plush ride, which manages to not be ultra-marshmallowy at the same time. It’s not a corner-carver, but it’s not a wallower, either. 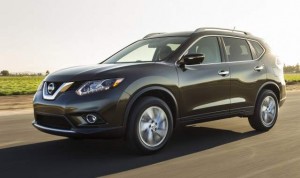 Credit goes to the Active Trace Control system, which gently and unobtrusively intervenes as necessary – sans the alarming flashing “TCS” light show and obvious pulsation of the brakes that typically erupt in a soft-suspensioned car (that’s you, Toyota RAV4) when driven somewhat roguishly.

Nissan’s approach is interesting – and unusual. The driver is less aware that the electronics are intervening, which is less disconcerting; it imparts higher confidence in the driver – and the vehicle. Comfort – and sure-footedness. It’s a happy combo.

The automatic engine braking feature, meanwhile, is helpful on those long downhill stretches. The CVT senses the descending grade and gears down (so to speak) keeping the vehicle from overspeeding without the driver needing to manually downshift (or ride the brakes).

And: You can turn the traction control off. 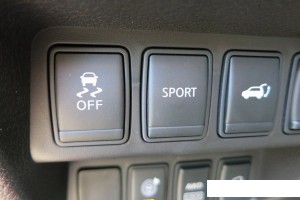 In the RAV4 I reviewed recently, the traction control can be turned all the way off only if you first completely stop the vehicle. If you push the button for off while the vehicle is moving, the car’s electronics leave it at least partially on.

Which isn’t helpful at all if, for instance, you’re working your way up a slow/ice-slicked road and are trying to maintain momentum. Sometimes, limiting wheelslip causes more problems than it solves.

No such issues in the Rogue.

The Rogue will also not try to parent you in another way. If you elect not to buckle up, no buzzers will erupt in outrage. A little red light will illuminate, nothing more.

And that is pretty roguish . . . these days. 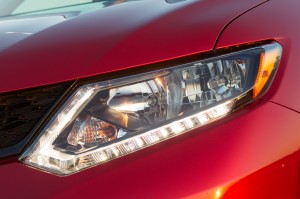 Cosmetically, the Rogue is conventionally crossover; the general shape is not radically different from the others in this class. But there are some thoughtful design touches – including standard LED headlights (the others in this class either don’t offer them or they cost extra) and rear doors that open wider (77 degrees) to make the most of the available opening. Sight lines are good, in particular, your rearward view. Nissan has managed to comply with the new anti-whiplash (tall headrest) mandate without blinding your view of what’s behind you.

Although the Rogue is an inch shorter overall than before (182.3 inches vs. 183.3 inches for the 2013 model) it rides on a slightly longer wheelbase (106.5 inches vs. 105.9 previously). This helped Nissan carve out the new model’s more spacious interior. 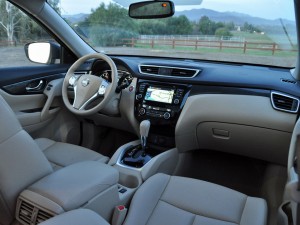 In addition to offering a third row, the Rogue’s second row is also roomier than before, boasting 37.9 inches of legroom vs. 35.3 inches previously. That’s a big improvement – and more important, it’s competitive with two-row-only crossovers like the RAV4 (37.2 inches in the second row) and the new Honda CR-V (38.3 inches). The Mazda CX-5 outdoes them all with a class-best 39.3 inches of second row legroom – but Mazda was only able to do this by crimping the much smaller CX’s cargo capacity: 34.1 cubic feet behind the second row and 64.8 overall. 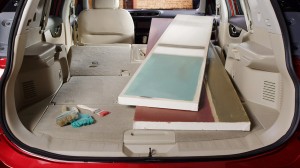 The Rogue’s second row also has 9 inches of travel, fore and aft.

And the Nissan’s available third row folds flat – while  the front passenger seat (and second row seats) folds forward. You can actually haul a stack of 2x4x8s in the Rogue… with the tailgate closed.

The Rogue’s cargo area boasts more than just volume. The clever two-tiered Divide-N-Hide storage system has a lower compartment hidden underneath the cargo floor (pull up the rearmost cover up to access) with user-configurable shelves that can be positioned in several ways, to accommodate cargo of various sizes. 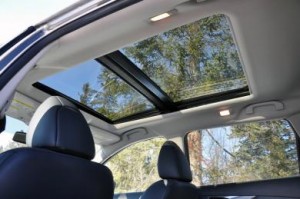 The one fly in the soup is it’s not available with the third row layout – and if you go that way, you’ll find that cargo space behind the last row drops from the two-row’s 39.3 cubes to just 9 cubes.

Also, the glovebox is huge – and the controls for everyday functions such as the air conditioning/temperature settings and fan speed are simple, immediately comprehensible rotary knobs rather than “multi-function” buttons.

No “mice” in this model. 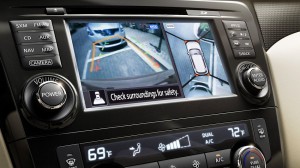 As in other current Nissans, you can order the Rogue with a 360 degree surround-view camera system – bundled in this case with moving object detection. Nissan also offers an oversize panorama glass sunroof as a stand-alone option (not “bundled” with other stuff you may not want or need). All trims – including the base S – come with a 5-inch flat screen in the center console (with upgraded functionality in the higher trims).

The top-of-the-line SL trim gets a larger seven inch LCD screen – bundled with GPS and a top-drawer nine-speaker Bose stereo. 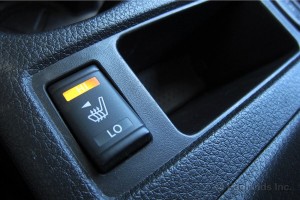 As in many – as in every – Japanese brand car I have ever test-driven (and that’s a lot of them) the seat heaters get warm and that’s it. They never get hot – as in German-brand cars. But – kudos to Nissan – the Rogue’s seat heaters at least stay warm. In several other Japanese-brand vehicles I’ve test-driven lately, the heaters cycle off almost as soon as they get warm. And even if you manually turn the heaters back on, nothing happens until the internal timer or whatever it is that governs the things decides it’s ok to let them warm up again.

Nissan says the seat heaters were designed specifically to maintain heat, to increase passenger comfort. The seats themselves are “zero gravity” – designed to relieve pressure and so fatigue during long trips. I can vouch for them being exceptionally comfortable on long-haul highway runs. 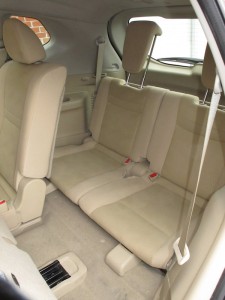 The optional third row is tight – and pretty much for the kids only. But the fact that it is available in this compact-sized crossover gives the Rogue a big edge over its same-size competition. To get a third row in anything else, you’ve got to go bigger – and pricier. The Kia Sorento, for instance. It’s several inches longer – and about $1,300 more to start. The Sorento also has a more roguish appetite: 20 city, 27 highway for the four-cylinder/FWD version (18/24 with the optional V-6 and AWD).

One other thing: You can still buy the 2013 Rogue – brand-new! It’s called the Rogue Select. Nissan is still building – and selling – the old Rogue and offering it at a discounted price ($20,150 to start). Yeah, it’s last year’s model. The year before last’s, actually. But it’s still brand-new, fully warranted – and costs thousands less than the competition before you even start haggling.

There’s very little not to like about this Rogue. Or the old Rogue, for that matter.

Well, except for the name – which may invite snickers. Again, not because the vehicle deserves them, but because the name is misapplied. Nissan has created a pleasant, useful, easy-to-live with crossover. It’s everything a rogue isn’t – and deserves a better – a more fitting – name.