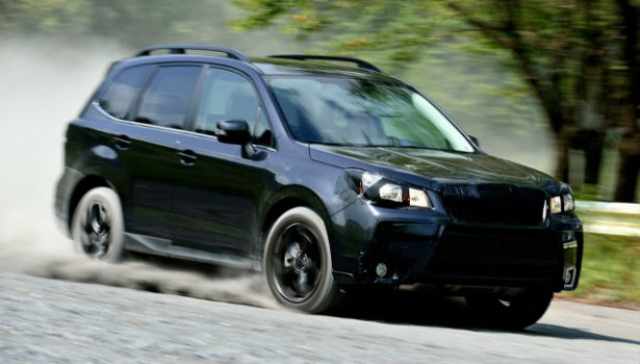 I don’t look at the Subaru Forester XT as (god help us) another crossover SUV. I look at it as what it is… 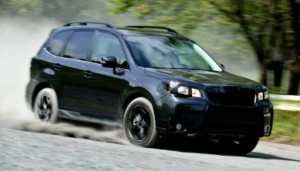 An M80 in a ladyfinger wrapper.

Did you know you can get one with more or less the same engine – turbo’d, intercooled boxer four – as in the WRX?

But without the rep, the insurance hit and the buzz-kill that comes with the justified paranoia of owning a car that every cop recognizes as a Known Offender? 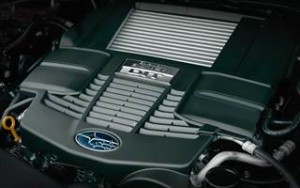 In the Forester, you’re just another crossover jockey. These things are slow, right?

But no one needs to know. 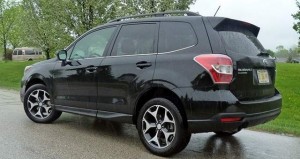 It differs from the others in several ways, including having got there first. Long before there were “crossovers” there were Subarus – and they came standard with all-wheel-drive (still do; it’s usually optional in the newbies) and were (and still are) the only crossovers that are powered by a boxer engine. This is an engine that lays flat instead of upright, the advantages being a lowering of the center of gravity (and enhancement to handling) and a naturally balanced engine that does not need heavy external balancers to keep from vibrating obnoxiously.

The regular Forester pretty much ends there. 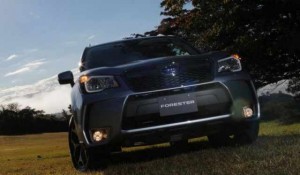 Subaru will also sell you (sotto voce) a WRX on the down low. This is the Forester XT – which also comes with AWD and a boxer engine, only it’s turbocharged and intercooled and makes 250 hp instead of 170 and gets you to 60 three seconds sooner (and quicker than competitor crossovers).

It moves, it handles – and it’s good in the snow.

It may not have a big wing – or gold anodized wheels – but it does have74.7 cubic feet of cargo capacity… vs. 12 cubic feet for the WRX sedan.

But then, you really do get what you paid for. 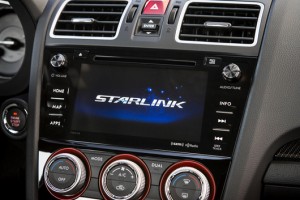 All trims get an updated version of Subaru’s Starlink system (roadside assistance, automatic collision notification/SOS emergency and vehicle health reports) as well as an updated LCD touchscreen. But the XT gets a nicer (and larger) seven-inch (vs. 6.2 inch) touchscreen. 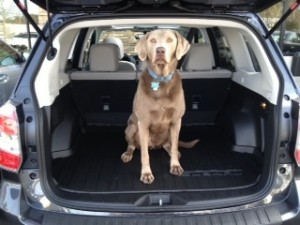 Six-speed manual that’s available in WRX isn’t in the XT.

The XT’s engine is the same basic 2.0 engine used in the WRX sedan.

It may in fact be exactly identical.

The only obvious  difference is the rated horsepower – 250 in the XT and 268 in the WRX. But flipping through the specs, it’s hard to find any mechanical reason for the XT’s lower rating. Same turbo (and same boost – 18 psi). Same intercooler; same (apparently) internals. 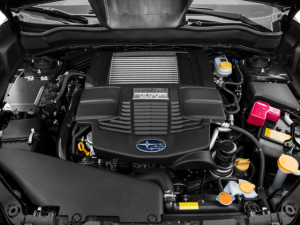 Such things have been done before. The classic example may be the 1970 Camaro Z28 and the 1970 Corvette. Each had the same LT-1 350 V8, but the Corvette’s LT-1 got a higher rating, even if the output was actually identical. Because, after all, it was in a Corvette.

Perhaps the same has happened here. WRX jockeys will feel better if they’re told their car has 18 more hp than the XT, which is, after all, not a WRX.

There are some important differences, though.

The biggest being you can’t get an XT with a manual transmission. The best you can do is Subaru’s new continuously variable (CVT) automatic with eight simulated speeds. You can toggle through these manually if you like, using the paddle shifters on the steering wheel. 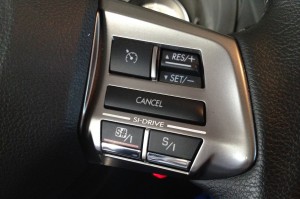 As in the WRX, there are multiple drive modes; these are are normal (I), sport (S) and sport sharp (S#), which dials up full manual mode for the CVT, more aggressive shift programming and (yep) sharper throttle response.

Other performance-minded enhancements include a 4.11 final drive ratio (vs. 3.70 for the regular Forester with the 2.5 engine and CVT) as well as direct injection (the Forester’s standard 2.5 engine still uses port fuel injection, which is less efficient and also makes less power).

So, how speedy is she?

The XT is also speedier than other crossovers.

That weight also gets felt in the curves (more on this below). 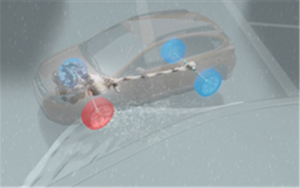 As mentioned already, the XT – like all Subarus – comes standard with all-wheel-drive. This is an important thing to bear in mind when shopping, especially when shopping other crossovers. Because it’s usually the case that AWD is optional (i.e., extra cost) and often, you also have to buy a more expensive trim (Equinox) or an optional engine (Ford Escape) to get it.

Subaru also offers more in the way of bad-weather capability than most conventional crossovers. Not just the standard AWD, either. Ground clearance is exceptional (8.7 inches) vs. the typical seven-ish for most of the rest and an available X-mode that combines Hill Descent Control with a special program for the traction/stability control system designed to keep you moving up slippery hills and prevent you from sliding down those same slippery hills. 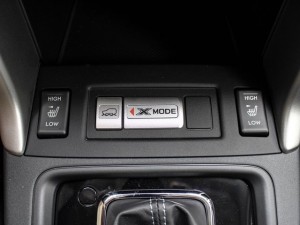 If you can keep your foot out of it, the XT is capable of giving you very good gas mileage, too: 23 city, 28 highway. I, however, averaged 22.3 MPG … because I could not keep my foot out of it.

Also, the turbo engine craves premium unleaded. You can feed it regular, but the computer will de-tune the performance (and the mileage) so you lose either way.

At the pump, that is. 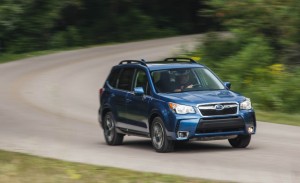 You can’t spin the tires.

By hooking them up.

This is the purpose of the XT’s all-wheel-drive system.

It makes use of every horsepower made by the 2.0 turbo engine, transmuting all 250 (268?) into forward motion rather than black marks on the asphalt. It is also specifically designed for lateral grip. High speed cornering. This is highly unusual, crossover-wise. The AWD systems in most crossovers are set up to keep the thing from sliding around in a straight line. Some of the higher-end models have systems (e.g., Acura’s Super Handling All Wheel Drive) also meant for the corners, too. But in its class – and relative to the price-comparable competition – the XT is something special. 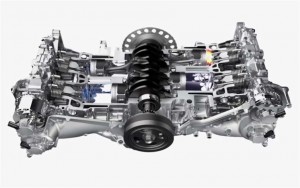 Which brings us back to the 2.0 engine it shares with the WRX. It is a short-stroke mill (86 mm bore vs. 90 mm for the regular Forester’s 2.5 liter engine) designed to rev quickly, which it does. This quick-to-spin personality is enhanced by the lower weight of the boxer engine’s naturally balanced reciprocating assembly.

There is a reason why Porsche also favors this design.

The engine also produces – and maintains – its peak torque outputof 258 ft.-lbs. (same as the WRX’s)  from 2,000 RPM up  through 4,800 rpm (vs. the standard Forester engine’s much lower 174 ft.-lbs. that’s made much higher on the dial, 4,100 RPM). What it means is immediate thrust whenever you want it. The thing pulls like a spurred in the haunches Clydesdale – and will continue to pull through triple digits and into WRX top speed territory (which shall remain theoretical for purposes of this public discussion). 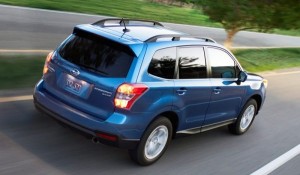 I’d prefer a manual myself but the CVT acquits itself well by not behaving at all like a CVT. It is programmed to mimic a conventional automatic, right down to the driver-selectable (if you want to) eight “speeds.” The chief clue that it’s a CVT is the impossibly quick (for a regular automatic) downshifts. You can go from “eighth” to “third” in the blink of an eye – skipping everything in between. It’s super cool, because there’s no time lost gearing down. You are there – immediately.

But, again, the manual six-speed would be more fun. But it might also blow the XT’s cover. 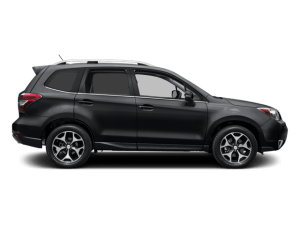 A WRX is slightly quicker… and whole lot less practical.

Especially since Subaru dropped the hatchback wagon version and currently only sells the WRX in sedan form.

Which means a really small trunk (12 cubic feet) vs. the XT’s 31.5 cubic feet. And that’s with the back seats up. Drop ’em and the XT’s got 74.7 cubic feet of space for stuff, almost six times the WRX’s available space – and more than pretty much every other crossover in this class.

The XT even has more cargo space than the former cargo capacity champ, Honda’s CR-V, which has 70.9 cubic feet. 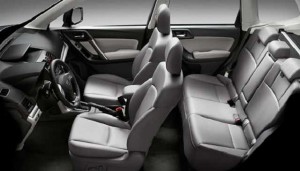 Front seat legroom is exceptional, too: 43 inches. The second row’s also roomy (38 inches). And it’s really roomier than the specs indicate because there’s so much fore and aft adjustment potential. If you’re not an NBA forward, you probably will not need to scoot the driver’s seat to full extension – which will give the person sitting behind you even more legroom.

The XT comes with its own special gauge cluster, including two LCD panels in the center stack. The upper (smaller) one features multiple gauges, including one for the turbo boost, another for the engine temperature and a third – unusually – for throttle position. It tells you (as if you didn’t know) how deeply your right foot is in it, which will probably be often. 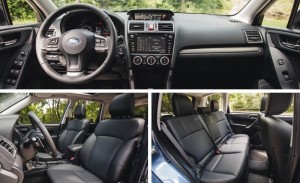 Below this is the new higher-resolution (and larger, in the XT) touchscreen for the infotainment, which also features smartphone-style finger pinch control. The system  includes Pandora, iHeartRadio, Stitcher and numerous additional apps.

The main gauges are analog – speedo and tach with a smaller info screen in between.

Subaru packages the XT as a luxury model as well as the stealth performance model. You’ve got your choice of loaded Premium or really loaded Touring, which comes with everything the Premium has (including the very worth-having Cold Weather Package with heated seats and windshield wiper nozzles, plus the panorama glass roof) and a really nice 440 watt  HarmanKardon premium audio rig.

Which, by the way, still has a single disc CD changer. In case you haven’t had time yet to transfer your stuff to your iPod or smartphone. 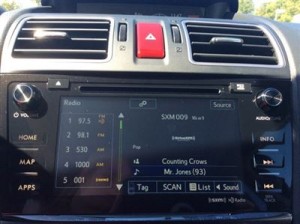 The new touchscreen is a bit… touchy.

Like all of them, it’s easy to inadvertently select the thing you didn’t want, or dial up too much (or too little) volume and so on because there is no positive, tactile, mechanical button or knob involved. With a flat screen, you can’t go by feel alone because there is nothing to feel. It’s easy to miss – and you have to look.

This is the disadvantage to all of them. Subaru has crutched this defect with secondary mechanical (and tactile) controls for some functions, such as the audio volume – which you can also adjust via steering wheel-mounted buttons.

Still, it can be aggravating to use at times.

So why are these touchy touchscreens so popular? In part because they are … popular. People like the smartphone-style appearance  and because the “nice” cars have them it is becoming expected (else your car is not “nice”). Also, the displays make it easy to give you more stuff to play with than would be possible via old-style buttons and knobs (because there is only so much room for those) while with an LCD display, it’s easy to scroll through multiple displays.

If you like the performance of the WRX but need something with more room – and a lower profile – you might want to take a look!