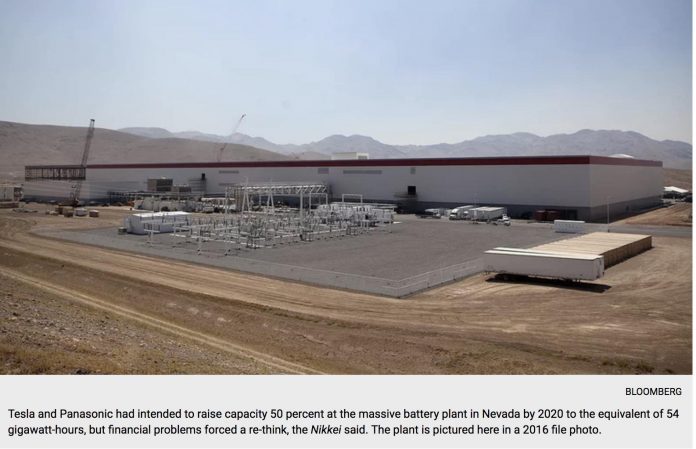 Tesla and Panasonic Corp. are tempering expansion plans for the massive battery factory they’ve plugged billions into the last few years, deepening concerns about demand for the carmaker’s electric vehicles.

Tesla shares fell 2.8 percent to close at $268.42 on Thursday, extending their drop this year to 20 percent. A record decline in deliveries during the first quarter stoked concerns about slackening demand for the Model 3, the company’s newest and least-expensive car. While CEO Elon Musk last week reiterated a forecast for 360,000 to 400,000 vehicle deliveries in 2019, investors remain “cautious” given its history of missing ambitious projections.

“The environment for Tesla is getting tougher and there are question marks on Tesla’s ability to deliver sustainable profits,” said Sven Diermeier, a Frankfurt-based analyst at Independent Research GmbH. “Other major manufacturers are readying their own electric lineups, and are able to cross-finance battery cars with the higher returns from combustion-engine cars.”

Tesla and Panasonic had intended to raise capacity at the so called “gigafactory” by about 50 percent by 2020, but financial problems forced a re-think, the Nikkei said, without citing its sources. Panasonic also intends to suspend planned investment in Tesla’s battery and electric vehicle plant in Shanghai, and instead provide technical support and a small number of batteries from the existing gigafactory, the newspaper reported.

Tesla’s financial strength has been a concern for investors. The company had to pay off a $920 million convertible bond in February, which ate into the about $3.7 billion of cash and equivalents it held at the end of last year.

Reader Question: Mazda vs. Toyota and Honda… and Maybe Soobie?

Reader Question: A Charge Out of the Volt?

Better Than a Diaper