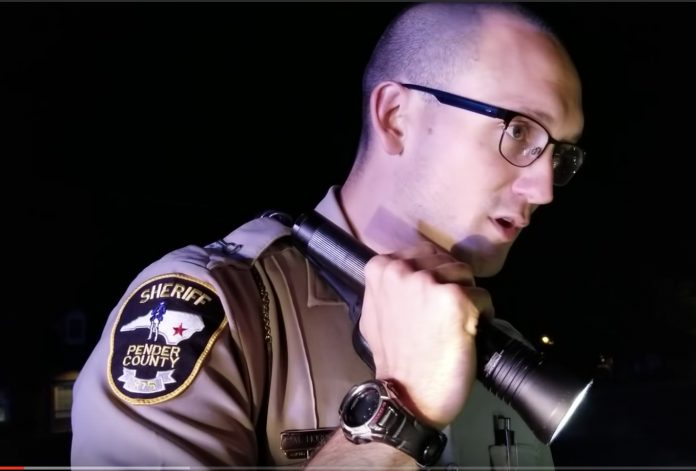 Obeying the speed limit (or any other law) is no defense against vindictive armed government workers, as the first video which follows below shows.

The AGW who stopped this car with the threat of murderous violence – implicit in every non-consensual interaction with an AGW – admits, openly, that the driver was not exceeding the posted speed limit – but asserts that his not exceeding it is itself “suspicious.” This assertion of “suspicion” gives him, the AGW, pretext to stop anyone he likes and subject them to an Authority Display.

“I seen (sic) you going 31 miles per hour in a 45,” the AGW illiterately exclaims. The driver points out that this is not illegal. This fact cuts no ice. “Suspicious vehicle,” exclaims the shaved-head agent of the state. But adduces no violation of any law.

The reasoning would startle Kafka.

In this instance, the AGW and his partner keep bright flashlights trained on the vehicle’s interior as they visually search it. Luckily for the car’s driver and its occupants, all their “papers” were in order and the AGWs had to sulk away without any booty (or bodies).

But not before subjecting the car and its occupants to an Authority Display, including a threatening baton-twirling display with a skull-cracking Mag light flashlight. Had the men not been obviously recording the incident, it might have turned out differently.

This “suspicion” business is popping up in the Authority Displays one can find all over YouTube and other online media, so it is certain that it is not an aberration but rather a new “tool” that AGWs across the country are being “trained” to use.

Not officially, of course.

The thinnest lip service must still be given to the law, which exists only as a fungible, nebulous thing subject to the random interpretation of those who enforce it.

But in practice, the law amounts to do whatever an AGW says it is. Questioning the AGW’s assertions is extremely dangerous because it constitutes “resisting” – and that gives the AW the green light to commence Submission Training, also known colloquially as a Hut! Hut! Hutting!

“Suspicion” is like a Swiss Army knife in that it can be used for almost anything. It is even better than a Swiss Army Knife because the knife only has the blade, the screwdriver, the magnifying glass and the fish scaler.

You are walking down the street at night. It’s legal.

“Suspicious!” Let’s have your papers.

You are parked the side of the road – legally parked – going over some papers, or waiting- none of these actions illegal.

But they are mighty “suspicious.”

Taking video in public. Looking askance at an AGW.

You know what that is.

The new magic words. When an AGW eructs them, the entire Bill of Rights vaporizes. A government worker with a gun forces you to submit to his harangue, at the very least. Often, he will force you to hand over your identification, which is technically illegal absent probable cause to suspect the person has committed or is about to commit a specific illegal activity.

“Suspicion” does not qualify as probable cause precisely because it is non-specific.

But that “ties the hands” of what is styled “law enforcement” (AGWs) who must be given every “tool” to “keep us safe.”

That, at any rate, is the argument peddled – mostly (and ironically) by “conservatives,” many of whom who suffer from raw tongues from all the badge licking they do. It’s ironic because “conservatives” will tell you they are concerned about what they style “Big Government,” which they claim they do not trust with too much power. Yet they practically worship armed government workers who exercise arbitrary, unlimited power.

It’s an interestingly cognitive dissonant aspect of their thinking.

The broader point is the lawlessness of “law enforcement,” which ought to be of concern to everyone – irrespective of one’s politics. Whatever the law ought to be can be debated. But once the law is codified, that ought to be the limit.

But AGWs are asserting no limits – de facto and (if the noxious doctrine isn’t firmly repudiated by the courts, soon) it will be de jure. Any of us, at any time and for any reason, will be subject to an Authority Display and Obedience Training at the whim of any armed government worker who asserts we are “suspicious.” Home furniture, decoration, and similar deals are always here.

In which case, there no longer is any law – except the arbitrary exercise of power by armed government workers.

If that isn’t the essence of tyranny, then the word has no meaning.

EPA Mandates How Much Gas You Must Buy