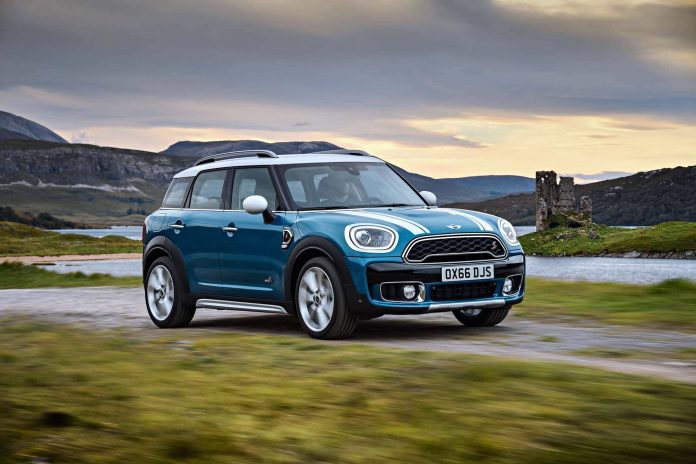 There’s an old Motorhead saying: Speed is just a question of money. How fast do you want to go?

That’s been updated for our time. How far do you want to go . . . on the batteries? And how much are you willing to spend to save on gas?

The Mini Countryman plug-in hybrid has answers to both of those questions. 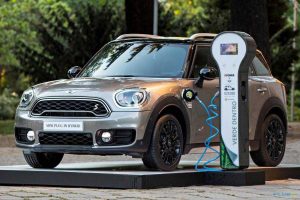 The Countryman is Mini’s least mini model. It’s a five-door hatchback that seats five adults – and their stuff.

But at just under 170 inches long, it’s still about a foot shorter overall than compact-sized sedans like the Toyota Corolla and Honda Civic.

It’s designed for people who like the Mini look – and vibe – but need more room.

Which  is actually a lot of room for such a small-on-the-outside wagon.

And for a hybrid.

It has 17.2 cubic feet of space for cargo behind its back seats and 47.4 cubic feet with them folded down – which is only fractionally less room for cargo than the non-hybrid version of the Countryman (which has 17.6 and 47.6 cubic feet, respectively).

It also has around three times the cargo space in the trunk of the typical (and foot-longer) compact-sized sedan. 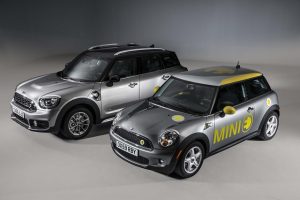 And they haven’t got the Mini’s spunkiness.

The plug-in hybrid has some other things, too – including the capability to go about 12 miles on battery power alone.

If your drive is within that radius of action – and you can plug in when you get where you’re headed (and have time to wait while the batteries regroup) you could save a bunch on gas by not burning it.

But fuel efficiency costs money, too. 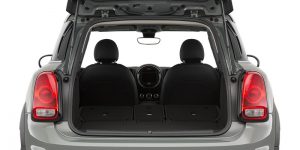 It’s hard to make the economic case for that.

So Mini makes a performance case on top of that.

The hybrid’s electric motor and battery boost the combined output of the package to 221 horsepower – which is almost 100 horsepower more than what comes standard in the non-hybrid Countryman.

This gives you the option to haul ass and save gas.

All-wheel-drive (and an automatic transmission) comes standard, too. 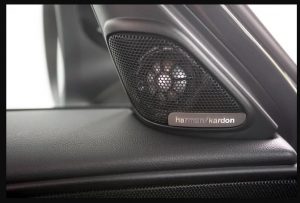 As per Mini tradition, you can also configure your particular Countryman with an almost infinite array of a la carte options, both factory ordered and available over the counter at the dealership.

EV capability – without the EV wait.

No loss of cargo capacity to get EV capability.

Economic case for this one ultimately depends on how short your drive is. 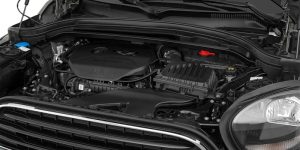 Mini has the right idea, arguably.

Even though the price of gas has gone up recently, it is still much too low for any plug-in hybrid to make sense on purely economic grounds. The price of gas would have to increase to at least $4 or even $5 per gallon – maybe more – before the money you saved in the form of lower fuel bills makes up for what you spent to buy the gas-saving plug-in hybrid tech.

Thus, Mini offers power as its own form of compensation. 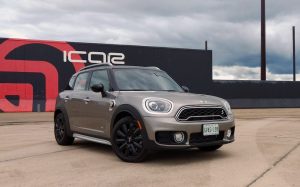 Almost as much power, it turns out, than the most powerful version of the Countryman – the John Cooper Works (JCW) version, which focuses exclusively on hauling ass and forget about saving on gas.

But the hybrid Countryman pairs the regular Countryman’s 1.5 liter IC engine (which makes 134 horsepower) with a 7.6 KilowattHour battery/motor for a combined output of 221 horsepower and 284 ft.-lbs. of torque. 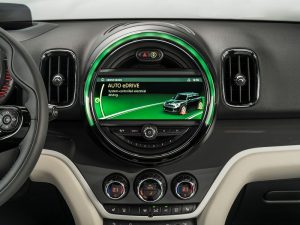 What you end up with is a vehicle that is capable of burning rubber without burning gas – for about 12 miles, at least. After that, the Countryman’s 1.5 liter IC engine kicks back on for primary propulsion, as in a conventional hybrid.

There’s an additional upside here as well – though it has (cue Dark Helmet voice) absolutely nothing to do with saving money.

If you just like the idea of owning an electric car – for whatever reason – but don’t like the idea of having to plan your life around plugging in – a car like this is just the thing. You can drive until the battery charge wilts – and then keep right on driving. Plugging in is not mandatory. You can do it when it’s convenient – a feature no full-time EV offers, even as optional equipment. 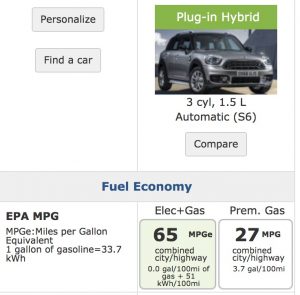 But there’s also a downside – and it also has absolutely nothing to do with money.

The hybrid Countryman has a very mini gas tank – just 9.5 gallons vs. 16.1 in the non-hybrid version.

This means your range on gas is not very far, either.

It is hard to divine exactly how far – or not – the Countryman can go on just (or mostly) IC power because the cheesy government uses a new and hazy standard to rate the mileage of plug-in hybrids. It is styled “MPGe” – or miles-per-gallon equivalent. It is supposed to be an amalgam of city/highway and putative electric operation.

For the Countryman hybrid, this number is 65 MPGe – which sounds really impressive – but your actual mileage may vary.

I ran my test Mini hybrid’s tank to “e” (no more MPGs) in about 180 miles of mixed-use driving.

The good news, though, is that while you’ll be stopping more often to refuel, you won’t have to wait for a recharge. Gassing up only takes a few minutes. 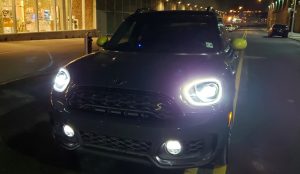 The appeal of EVs – on other than gas-not-burning grounds – is the immediately forceful thrust of electric motors. Acceleration that is instantaneous. Touch the pedal – and it goes.

And the silent running of electric motors.

You’ll enjoy both those things in the Countryman hybrid, just for not very long. Or rather, not for very far.

Most full-time EVs can go 100 or so miles before they need to be plugged in for a recharge. The part-time EV Countryman can go about 12 miles on a full charge.

This is the functional price you pay for the convenience of not having to plug in, as you would a longer-legged full-time EV. 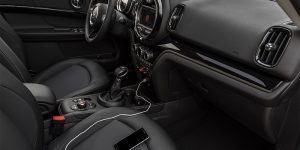 Which is also an economic price in that the only way to make this package works as a money-saving proposition is to restrict yourself to drives within the 12 mile or so EV-only range – in order to limit how much you spend on gas to the least extent feasible, so as to recoup over time what you spent to avoid buying gas.

For city dwellers, this is much more realistically doable than for suburbanites.

Ironically, it’s easier for suburbanites to plug in because it’s usual to have a garage in suburbia, where there are also usually outlets – whereas city people live in apartments and it’s not easy to run an extension cord from the outlet in your apartment three floors up to your car parked on the street below. 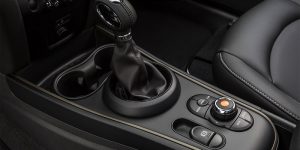 Also ironically, the Countryman and other plug-in hybrids are actually more suitable as long-range cars precisely because they have the IC side of their drivetrains to fall back on.

If you are caught in a winter storm, for example – and want to use the heat – there is no worry about the effect on the batteries – and the possibility that you might run out of motive power before you make it where you’re headed.

That’s an issue with full-time EVs, because everything that’s powered in a full-time EV – including the heater – is powered exclusively by the batteries. There’s nothing to fall back on when the batteries wilt. 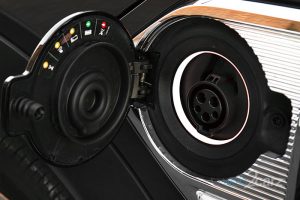 Plug-in hybrids are like having a dual-fuel generator for when the power goes out. If you run out of gas, switch over the propane; either way, the lights (and the heat) stay on.

It costs extra, of course – but you are getting something for your money. Whether the “extra” is worth it to you is entirely up to you.

Some will think so, others not.

You also don’t get something else, which may also be worth it to you.

The hybrid Countryman doesn’t come with a continuously variable (CVT) automatic, which some people like and others do not like. Instead, a conventional six-speed automatic.

It alters the effective drive ratio by continuously varying the relationship between a pair of adjustable pulleys and a drive belt. This is good for mileage – which is why CVTs are almost always used in hybrids. But CVTs tend to be noisier than conventional automatics with stepped gears (e.g., first through sixth) or rather, they magnify drivetrain noise – by letting the engine rev up during hard acceleration – and keeping it at high revs until the driver eases off the accelerator.

A conventional automatic will shift up through its gears, engine revs decreasing with each upshift. 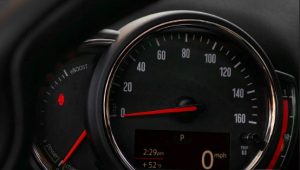 Lots of engineering sweat has been spent to get CVTs to behave like regular automatics – and some do a very good imitation of them. But many people still prefer a conventional automatic for all the reasons just laid out.

The Countryman is one of the very few new hybrids that has one.

It also has a small footprint – and a tight turning circle (37.4 feet) which makes it an ideal car for Italian Jobbing it to work in. 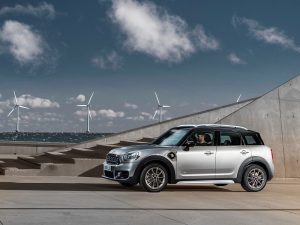 The Countryman is similar to the Clubman – which is also a wagon – and both have almost exactly the same cargo capacity specifications.

But there’s one big difference.

The Countryman’s got 37.6 inches vs. 34.3 in the the Clubman. It’s the difference between a family car and an in-a-pinch car. The Countryman is a car that comfortably carry five people, plus a bunch of stuff. The Clubman can comfortably carry two adults – up front, the driver and front seat passenger – and two or three more adults who can handle it. 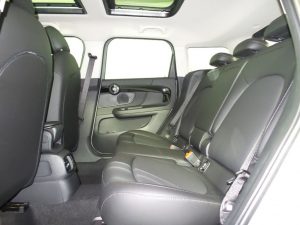 There’s another difference, too –  more rear shoulder room in the Countryman’s second row. It has 54 inches vs. 52.8 in the Clubman. Which also sits much lower – 56.7 inches off the pavement vs. 61.3 for the Countryman.

And there’s a final difference:

Mini doesn’t offer a plug-in hybrid version of the Clubman. 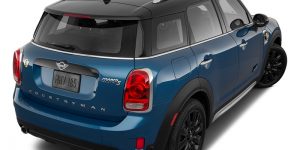 The hybrid’s gas tank is about half the size of the non-hybrid Countryman’s because the electric motor/battery pack had to go somewhere.

Now you know where it went.

Mini lets you option out the hybrid version of the Countryman as you like – as opposed to making you buy, say, the top-of-the-line Iconic trim.

The one thing you can’t get  in the hybrid Countryman is a manual transmission. The non-hybrid version comes standard with one.

Buying a plug-in hybrid when gas is relatively cheap doesn’t make a lot of economic sense – but that’s not the only reason to consider this plug-in hybrid.