Why buy a hybrid when gas is cheap?

To go faster, of course.

A bit more speed is among the benefits you’ll get if you buy the new plug-in hybrid version of the 2019 Crosstrek. It gets to 60 one full second sooner than the non-hybrid version of Subaru’s very popular littlest crossover.

It can also go about 17 miles in electric car mode – and as fast as 65 MPH – without burning any gas at all. 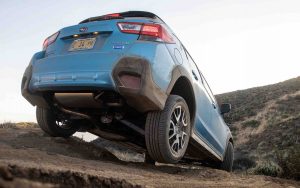 On the downside, speed does cost money.

But, you’re saving time now – as well as gas.

How much is that worth to you?

Also, the price bump is deceptive – in that the plug-in comes with a great deal more than just the plug-in hybrid drivetrain.

It is loaded with pretty much every amenity you can get in any Crosstrek – including turns-in-the-curves headlights (part of the otherwise optional EyeSight suite of safety assists), the also-otherwise-optional All Weather Package (which gets you heated seats and outside mirrors) leather trim with contrast-color cross stitching, keyless ignition and the option to pick options such as a premium 432 watt Harman Kardon audio rig and a heated steering wheel. 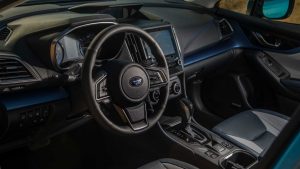 The Crosstrek is a compact-sized, five-door crossover SUV – based on the Impreza five-door hatchback wagon.

Its other draw -in addition to those above – is that it comes standard with AWD, which most of its rivals – including models like the Honda CR-V and Toyota RAV4 –  offer but charge extra for.

And which cost more even in front-wheel-drive form.

Enter the wild card: The plug-in hybrid version of the Crosstrek. 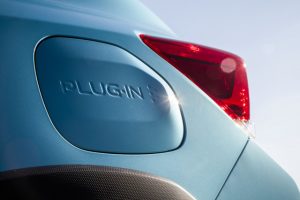 Mazda doesn’t even offer a hybrid version of the CX3 – and forget the plug. Also forget off-roading (or poor-roading) in the Mazda, which has several inches less ground clearance than the Soobie.

That’s not to slam the Mazda; it’s just a question of horses for courses. The CX-3 sits lower to the ground because it’s meant to be sporty handling on-road rather than handle crappy roads.

The plug-in hybrid Crosstrek can also do something none of the others can:  Go down – and back up – those crappy roads without burning any gas at all.

The plug-in version of the Crosstrek is a new addition to the lineup for 2019.

Quicker – instead of slower.

Goes where other hybrids better not.

All the other Crosstrek virtues remain. 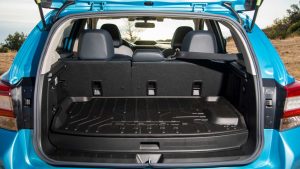 Some cargo space is lost – to make room for hybrid gear.

No spare tire (inflator kit instead).

Don’t be fooled by the Crosstrek plug-in’s lower advertised horsepower. 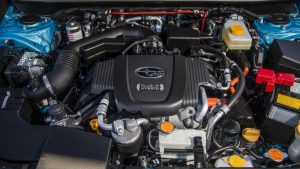 Subaru says the non-hybrid Crosstrek’s 2.0 liter boxer four (so-called because the engine lays flat, not upright, with one cylinder “boxing” its opposite across a common crankshaft) makes 152 hp, while the plug-in hybrid’s version of the 2.0 liter engine only makes 137 horsepower.

And yet, the hybrid is the quicker Crosstrek.

This seems incongruous until you factor in the plug-in hybrid’s additional power source – as well as the nature of that power source.

There are two electric motors – motor generators, actually – which along with a 8.8 kWh battery pack amp up the total power of the combined powertrain to 148 horsepower. This is, of course, still less power than the non-hybrid’s 152 horsepower. 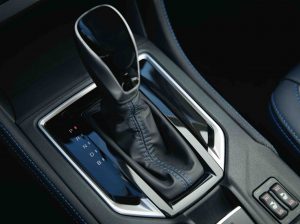 But power delivery is decisively in favor of the hybrid.

Because those electric motors make immediate torque – no revving to get there.

This is the chief virtue, perhaps of electric motors – and it accounts for the eyeball-flattening acceleration of EVs such as Teslas, which have big electric motors.

Anyhow, the jist is the plug-in is quicker  to 60 by at least one full second vs. the non-hybrid Crosstrek, with the additional virtue of being able to operate for 17 miles or so on just battery power, just like an electric car – without the range anxiety. 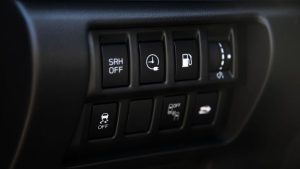 When the charge runs low, you can plug in – but you don’t have to plug in. You can keep right on going. At least, for as long as there’s gas in the tank. And when that runs dry, it’s a quick five minutes to fill it up – as opposed to at least 30-45 minutes for a “fast” charge.

This is the hybrid’s huge advantage over the EV – which makes you sweat how far you can go as well as how long you’l have to wait to get going again.

The Crosstrek can also go almost 500 miles when fully topped off on Volts and gas. No EV can touch that. 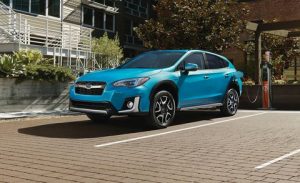 It also gets 90 MPGe – the inscrutable rating hybrids are assigned by the EPA.  It is a projection of the combined electric-gas mileage the Crosstrek is capable of delivering, assuming you make the most of the electric-only ability.

You might get that much – or less – depending on how far your drive is as well as how diligent you are about maintaining the battery pack’s charge. Which the Crosstrek will help you with, incidentally. The car has a charge scheduling/reminder feature.

It takes about five hours to recover full charge on standard 120V household current and about two on 240 Volts, if you have access to one. 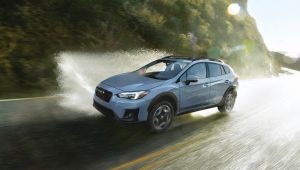 The Crosstrek plug-in feels a lot quicker than that – because of the immediacy of the torque delivered by those electric motors. The difference is especially noticeable when accelerating from a dead stop; if the Soobie didn’t have AWD, it would probably chirp the tires.

Mid-range power delivery is also superior. The hybrid has the feel of a turbocharged car – without the turbocharger. 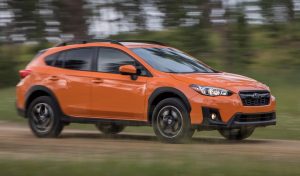 The plug-in Crosstrek comes only with the CVT automatic, which has driver adjustable S/I modes (for shaper or softer throttle response) and seven driver-controllable “gears” – which is a bit confusing because CVT automatics haven’t actually got any gears.

But the car manufacturers have found that many people still like the feel of conventional automatics – which do have a fixed number of gears (e.g., 1-7) and so the Soobie’s CVT has been set up to mimic them.

With one notable – and commendable – exception.

There is no shift shock – the forward-back snap that happens in cars with conventional automatics (and manuals) as the transmission shifts from one gear to the next. In the Soobie, all you feel is an engine RPM change – without the coffee-spilling forward-back snap.

The other commendable thing about the Crosstrek hybrid is that it hasn’t lost a step vs. the non-hybrid . . . when it comes to where it can go (including places most Crosstrek competitors can’t). 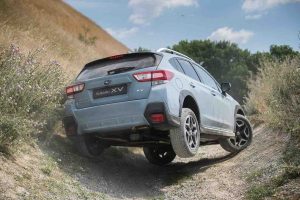 You get the same 8.7 inches of ground clearance – which is more clearance than many 4WD SUVs (a standard-issue Chevy Tahoe has just 7.9 inches) and at least as important as AWD as far as not getting stuck when it snows – and the plows haven’t.

You’ll also get the same superior AWD system – which routes power side to side as well as front to back. There is a reason for the high esteem Soobies are held in by folks who live where conditions are rough – and the roads are poor.

Other crossovers ave their virtues. The Mazda CX-3, for instance, is a better corner-carver. And the Toyota RAV4 hybrid – packing more than 200 hp –  is faster. 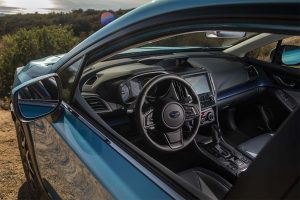 But the Crosstrek is the most intrepid of the bunch. It is the go-to ride if you don’t want to get stuck.

The plug-in version of the Crosstrek looks like the standard Crosstrek – with the exception of the second fuel door (driver’s side) for electricity – and the crackling metallic electric blue paint job (Lagoon Pearl) and matching interior trim.

You can get a less electric blue paint job, if you prefer.

The plug-in also gets a different gauge cluster, with a charge/power gauge to the left of the speedometer in place of the usual tachometer. There are also some hybrid-specific apps (to help you plan/keep track charge cycles) and buttons on the console – and to the left of the steering wheel – including a battery save button, which when depressed does just that – saves the Volts for later.

As you’d probably expect, it has more cargo room behind its second row than the stubbier Mazda – but you might be surprised by how much more. 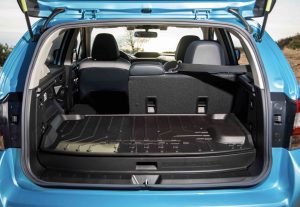 Perhaps even more surprising, the smaller overall Subaru has almost as much cargo space as the noticeably larger RAV (37.6 and 69.8 cubic feet, respectively) and CR-V (39.2 and 75.8 cubic feet).

The Soobie also has a roomier back seat (36.7 inches of legroom) vs. the Mazda (35 inches) and nearly as much as the noticeably larger overall Toyota (37.8 inches). 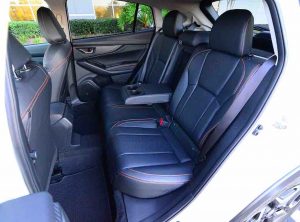 The CR-V creams them all when it comes to back seat legroom, though.

It has a stupendous 40.4 inches back there.

It also offers almost as much ground clearance – but (like its AWD system) it is optional; you pay extra to get what comes standard in the Crosstrek.

The standard-issue CR-V comes with 7.8 inches of ground clearance – and FWD. And it still costs more than the AWD-equipped Crosstrek with 8.7 inches of clearance – standard

Finally, the Crosstrek is the only one in the segment that offers plug-in hybrid capability. It may not make much economic sense at the moment – but you never know what gas will cost two or three years from now.

Meanwhile, you get to go faster in this moment. 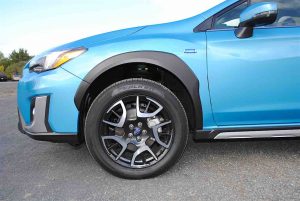 Given the low cost of gas, Subaru might give some thought to offering a less-loaded version of the plug-in Crosstrek.

The heated leather seats are very nice – as are the many other creature comforts that come standard with the plug-in equipment – but they add to the price tag, which detracts from the economic case for this car.

One thing Subaru doesn’t include which might also bear a rethink is a spare tire. Instead – and like many new cars – the Crosstrek hybrid has an inflator kit. Probably because the space for a spare under the floor in the cargo area is taken up by the hybrid gear. 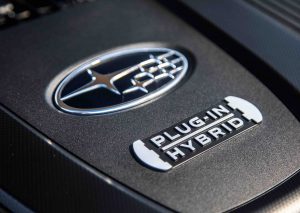 Inflator kits are ok – ad even to be preferred – in some cases.

For Subaru people, this is an issue. Because Subaru people tend to drive places where sidewall tears happen. And without a spare… you are stuck.

The good news, of course, is that this is easily remedied – by purchasing a spare tire and tossing it in the back. The bad news is, that the tire (plus the jack and lug wrench you will need to buy those, too) will take up cargo room.

One definite plus – even if it adds to the car’s cost – is the turns-with-you-in-the-curves headlights; unfortunately – or not, depending on your point of view – they are bundled with Subaru’s EyeSight suite of driver “assists,” including Lane Change Assist, Reverse Automatic Braking and a Pedestrian Alert system.

The headlights turning with the car illuminate curves better – and faster. An inarguable boon for every driver. 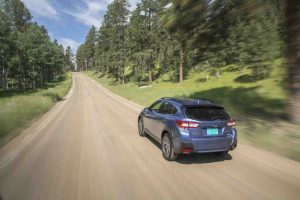 The other stuff is designed to prod – and bail out – the inattentive driver.

If you aren’t one, the benefit is debatable. The extra cost isn’t.

The Crosstrek is already one of Subaru’s best-selling models. It probably won’t hurt anything to make it quicker – and use less gas.