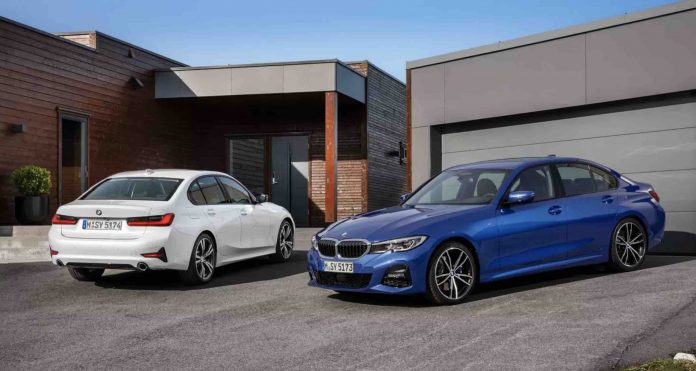 Is a Three with a four enough?

It’s actually more. And in more than one way.

The first way is much more power from the rebooted Three’s now-standard 255 horsepower turbo’d four – which used to come standard with 180 horsepower.

Speed is always a question of money. You’ll be asked to pay about $5k more to get into a new Three with more power than old Three came standard with.

Aber, this time speed also comes at something of a discount.

The new Three’s standard four delivers the same performance as the previous Three with its optional six – which cost more than the new Three – and uses noticeably less gas along the way.

And when the new six becomes available again later this year, it will match the performance of the old six in the previous M3 – the ultra-performance version of the Three – for about $12k less than what the 2018 M3 stickered for.

The new Three is also still available in either sedan or wagon bodystyles – the latter becoming as rare as even two of the 15 checkout lines at Wal Mart being manned and open. 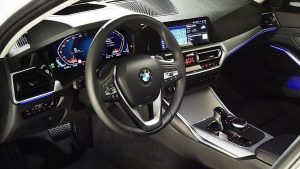 But before you grow hoarse from cheering, there is a little rain on this parade. For reasons which will be elaborated below, the new Three is henceforth automatic-only.

And the formerly available 43 MPG-capable diesel is kaput.

The Three is BMW’s best-known and best-selling  luxury-sport sedan  . . .  and wagon. 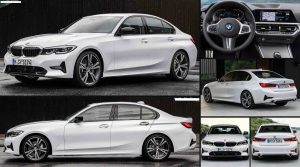 It can be credited with creating the market for the type of car now emulated by so many others – the four-door sports car that’s also a luxury car.

All 2019 Threes will initially be powered by the same 255 horsepower 2.0 liter turbocharged four – paired with an eight-speed automatic transmission. The previously available six-speed manual no longer is. 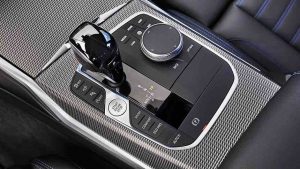 In a few months, BMW will once again offer the 3.0 liter in-line six which used to be optional in the Three.

A manual is unobtainable.

43 MPG diesel engine is no more. 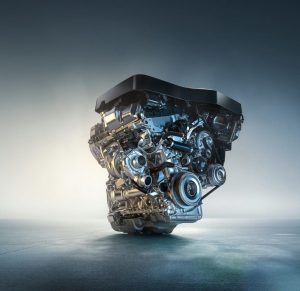 Some of you may recall when the car industry downsized vehicles to comply with the first round of government fuel economy fatwas back in the late ’70s and early-mid-1980s.

Today, it’s engines that are being downsized.

Both things being critical to the survival of cars like the Three – which aren’t inexpensive cars.

BMW – like everyone else building cars – is under heavier pressure than ever to wring more MPGs (and less carbon dioxide, a whole ‘nuther rant) out of the engines they put in their cars. If they don’t find a way to “comply” they get socked with fines – and these they must pass on to their buyers, who naturally don’t like paying more for less engine.

So BMW – and almost everyone else – pressurizes the smaller engines they’re effectively forced by Uncle to install in cars like the Three. 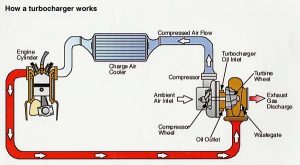 Add a turbo – to breath some life into the little engine. Literally.

Give it what amounts to mouth-to-mouth resuscitation. Force air into its “lungs” – into its cylinders. The more air you can stuff in there, the more horsepower you get out of there.

But you can dial back the force-feeding (i.e., the boost) when the power isn’t needed and that’s how you reduce fuel consumption without losing power when you do need it.

The government is placated – and buyers aren’t disappointed.

The new Three’s standard 2.0 liter turbo’d four whelps out 255 horsepower and 295 ft.-lbs. of torque – enough to accelerate the Three to 60 in 5.3 seconds, matching the 0-60 run of the previous generation Three with the optional 3 liter six while delivering 26 MPG city and 36 MPG on the highway (RWD version) which is noticeably better mileage than the ’18 340i’s 21 city, 32 highway. 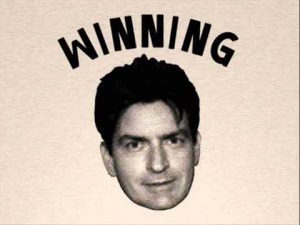 And not just Three vs. Three, either.

Which isn’t much more horsepower than in some $25k cars.

A stouter, 248 hp version of the Audi’s 2.0 liter four is available – but optionally.

Another cross-shop – the Benz E-Class – also comes standard with a turbo’d 2.0 liter four. It makes 241 hp – not quite up to the bar for standard horsepower set by the Three. 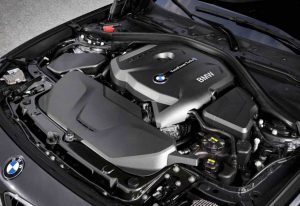 The M340i which is coming in a few months should take care of that concern.

One thing the government took care of was the forced-retirement of the formerly available 2.0 liter turbodiesel engine that you could buy in the 2018 Three.

It achieved a spectacular 31 MPG in city driving – and and even more spectacular 43 on the highway.

You’d think a government so very concerned about fuel efficiency – as it claims to be – would encourage rather than stifle high-mileage diesel engines. 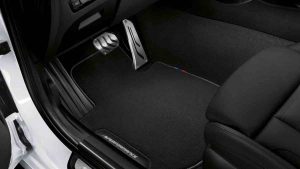 Another thing the government stifled is the Three’s clutch pedal – which it hasn’t got anymore.

Manuals are potentially more efficient than automatics because it’s a direct/physical interface between the engine making the power and the transmission delivering it to the road, so almost all of the power actually gets to the road – as opposed to being lost in transmission (as happens to some extent with automatics, which transmit the power of the engine hydraulically).

. . . if the person operating the clutch operates it properly.

Automatics can be programmed to operate efficiently all the time and regardless of the person behind the wheel. In particular, they can be programmed to score the best-possible MPG numbers on the government’s fuel economy tests, which determine compliance with the fatwas.

Which matters at least as much as whatever the people buying new cars want.

And that’s the main reason why manuals are going the way of ashtrays in new cars – even high-spirited performance cars like the Three. 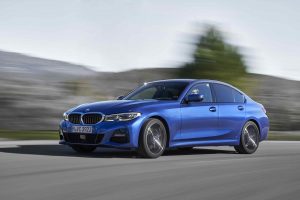 The main thing that’s missing isn’t so much the cylinders – and certainly not the power –  as it is the intangibles.

The sound, for one.

The four hardly makes any – either exhaust or turbo whistle/wastegate pop, which arguably ought to be corrected. Quiet is a desirable attribute in a luxury car. But the Three has always been a luxury-sport car.

The car that invented this category of car.

And the inline six defined the Three, manifested magnificently in the sounds that mechanical marvel produced.

All is too quiet on the Western Front now. 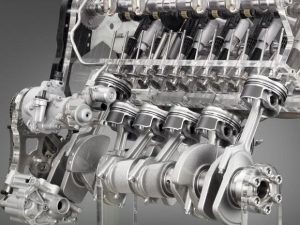 Functionally, it is hard to summon criticism. The new four objectively outperforms last year’s six and you pay less for this improved performance – and also for the gas.

But there’s not much difference in feel – or sound – vs. the other turbo 2.0 fours in this class.

We have lost something important – and I bet you can tell by now where to point the finger.

On the upside, the six is coming – and these new turbo’d fours approximate the torque delivery of diesels – both the total amount produced and the low engine speed at which it is produced. This translates into the immediate surge of thrust without apparent effort you get with a diesel – without the loss of wind you typically get with a diesel at higher engine speeds. 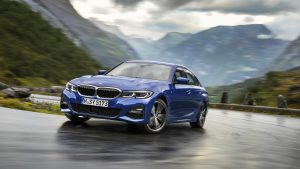 Just without the high mileage you used to get with a diesel.

Another thing Three buyers will have to do without is a clutch.

Functionally, it is hard to complain about the now-mandatory eight-speed automatic. Its algorithmic/real-time-adjusting shift programming tailors itself to every conceivable driving style and situation. From F1-style snappy in Sport to unnoticeable transitions in Comfort (two of the several driver-adjustable settings). And in a world of stop-and-go driving, it is admittedly a plus not to need to clutch and shift along with the endless ebb and flow.

But there are times when you miss being able to bring the revs up, feather the clutch and light up the tires. 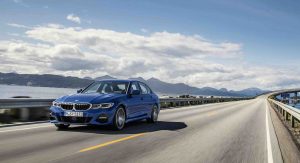 And now you can’t.

Not in the Three – and not in its automatic-only rivals, either.

But the Three makes up for a lot with other intangibles: The feel of its steering and the mind-meld telemetry you get between whatever you input and exactly what the car does in response.

Which it does immediately, in fine, ultra-precise increments that are entirely under your control. You can literally adjust your line by an inch to the left or right. The four-door Three makes some two-door sports cars look sloppy. 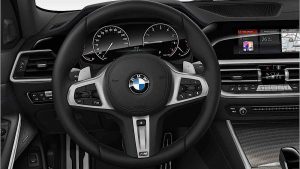 It certainly cuts the proverbial rug with the best of them.

And without beating you up – which most two-door sporty cars will.

Your cheeks and back and also you coffee (well, your shirt) pay the price for the absence of lean in the form of lots of bounce. The Three operates like a mag-lev train except it’s still in contact with the earth while performing its high-speed ballet. You can sip your coffee while cutting the rug and not arrive at work in need of a fresh shirt.

You can also head out for hours of nonstop motoring and not arrive in need of a massage to work all the bruises out.

What was once said about James Bond also applies to the Three:

Nobody does it better. 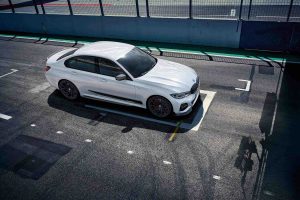 One way to make a car more appealing to more people is to straddle classes.

Not too big – but not too small.

At 185.7 inches long overall, the Three sedan isn’t quite mid-sized . . . but it’s also a notch above compact-sized.

This is the right size for buyers who want mid-sized interior space without the mid-sized exterior footprint.

Both of which the Three delivers. 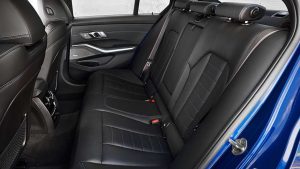 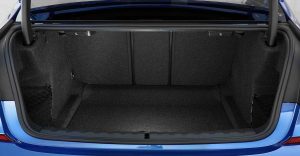 The Three has expansive, frameless door glass – and when you lower the glass, you can lean your elbow on the open door top without risking a rotator cuff injury. This is a very hard to find feature in any new car – mainly because it’s easier to pass federal side-impact crash tests by building taller doors (and framing the door glass).

BMW passes the same tests – without costing your view. It also looks good to view.

Which is no small part of what you’re paying for.

BMW has simplified the trim structure by eliminating it. 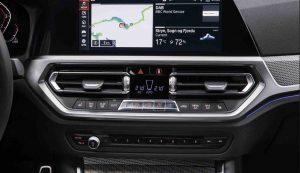 Whether you go for the sedan or the wagon  – or rear drive or AWD – you get the same package of standard stuff, including a sunroof, 10 speaker audio system and an iPad-style 8.8 inch LCD touchscreen to the right of the main gauge cluster.

You can upgrade the touchscreen to a larger (10.25 inch) display, get a Heads-Up Display,  a fully digital main gauge cluster, swap out the standard audio rig for a 16 speaker Harman Kardon surround-sound rig, add BMW’s gesture control system – which lets you call up/adjust secondary functions such as the stereo’s volume by twirling your finger or waving your hand – and a self-parking system, among the highlights. 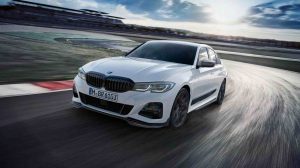 Also on the menu is a Track package that gets you close to M3 handling and braking capabilities without the M3’s forbidding price tag.

It bundles a locking rear differential with a Brembo high-performance brakes and firmer suspension tuning. The M Sport package replaces the standard 18 inch wheels and tires with more aggressive 19-inch wheels shod with “summer” tires and BMW “M” trim inside and out.

Is there a hair in the soup? 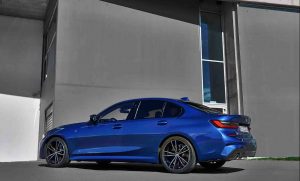 I found just one.

For a car of the BMW’s caliber – and MSRP – such things really ought to be included.

It costs a bit more to get into the new Three. But once you do, you’ll be glad you did!