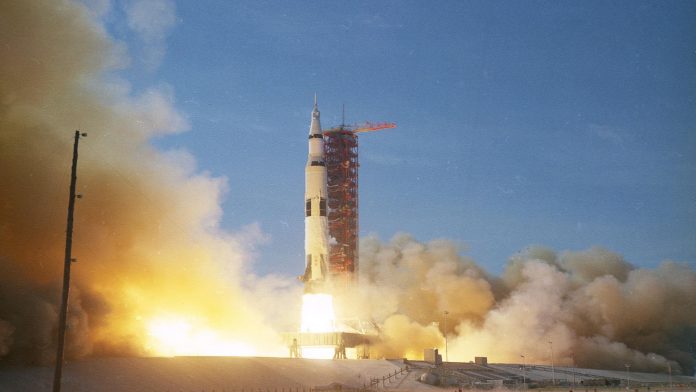 Fifty years ago, the mightiest machine ever devised by man lifted three men off this Earth; five Rocketdyne F1 engines delivering almost 8 million pounds of thrust to propel the astronauts of Apollo 11 – Neil Armstrong, Edwin Aldrin and Michael Collins – to the Moon.

Nothing like this has been achieved since December, 1972 – when the last Saturn V rocket of the Apollo program lifted off the pad.

It was not supposed to have been the last of the Apollo missions. Several more had been scheduled. They were cancelled .

Because Whitey on the Moon.

You may not be familiar with this loathsome ditty. It was written – and “performed” – by Gil Scott-Heron, a late ’60s version of AOC/Kamela Harris/Ilhan Omar, et al. That is to say, by one of the Perpetually Aggrieved. They are as aggrieved today – 50 years after Apollo stopped sending whitey to the Moon – as they were when whitey was still going to the Moon.

Heron was mad at Apollo because money spent on the Moon missions wasn’t going to his sister Nell, who “done got bit by a rat.”

Ayn Rand wrote about all of this in what was, in my opinion, among her finest essays: Apollo and Dionysus (here). She described two different mindsets. One looked up – and admired achievement, what it took to achieve something like the Moon shot.

The other mindset resented it – and worked to tear it down.

Whitey on the Moon.

It is a tragedy beyond the power of words to articulate that he is no longer on the Moon. That no one has been on the Moon – in half a century.

That is half a century of wasted time – on top of all the money wasted on what comes to down to Nell’s rat bite (and unpaid rent) which became more important than putting whitey or anyone else on the Moon.

Or even in low Earth orbit.

Have you noticed that – excepting electronic baubles – that by every meaningful metric we are regressing?

Slower aircraft – instead of supersonic ones. The Concorde was flying Mach 2 in 1972. It is in museums, today.

Not only isn’t whitey – or anyone else – on the Moon. He never got to Mars. He was headed there, or would have been . . . had Apollo not been cancelled.

There were things mightier than the Saturn V in the works. Among them, Orion – a nuclear-powered spacecraft that would have put men on Mars in the time it took to get them to the Moon that summer of ’69.

Because of looking down rather than up. Because we were made to feel guilty for looking up.

Can you conceive what might have been, had whitey continued going to the Moon?

Watching those now-ancient films of the Saturn Vs lifting off, seeing the men of Apollo as old men, dying off . . . all of it about yesterday, a tomorrow that never came.

I’m Tired of Wearing a Helmet