I made it home – without a flatbed!

And without having to plug the eGolf in – and wait – before I could get home.

But the most interesting thing I discovered about VW’s first electric car wasn’t how far it can go, or how long it takes to recharge before you can get going again.

Drive an electric car and you will quickly discover it is not like driving a gas-engined car. Not just the immediate torque-pull of the direct drive electric motor under the hood – and not just the Stealth Mode silence of the thing.

There is another thing. A good – and bad – thing.

My round trip test loop was just under 70 miles – about 34 of them “down the mountain” to do a little work on my laptop at the coffee dive I frequent and then – remaining charge willing – back up the same mountain the same 34 miles, which I figured should be well within the eGolf’s remaining radius of action. 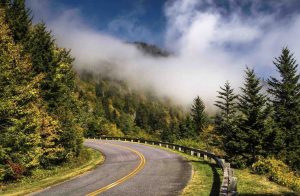 When I got back home, the range indicator said I had 58 miles left.

This meant I had used up just a bit more than half (82 miles) of the eGolf’s indicated “full charge” range of 140 miles to travel 68 miles – so the range indicated when I began my trip was optimistic by about 10 percent.

That’s not unusual for any car. The EPA advertised mileage on every car has an asterisk/fine print attached: Your mileage may vary.

But what’s interesting is where the eGolf lost almost all of the 82 miles of range consumed during my 68 mile trip.

On the way downtown – literally down into town – the eGolf’s batteries not only didn’t grow weaker – they grew stronger. I enjoyed a free lunch at the Entropy Cafe.

The car rolled downhill – I used the Blue Ridge Parkway, a gorgeous drive – without expending any energy, while taking advantage of the inertia (via regenerative braking) to reverse entropy electricity back into its battery pack. 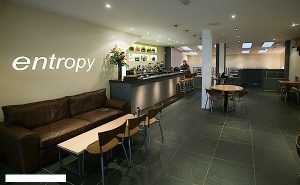 The eGolf’s range began to increase as we rolled.

By the time I was at the bottom of the mountain – after almost 15 miles of continuous downhill coasting from about 3,200 feet elevation to about 1,200 feet – the eGolf’s range display had notched up to 147 miles.

More than the supposed maximum full-charge range touted by VW.

No gas-engined car can match that feat – even with its engine turned off. And the AC won’t run with the engine off in most non-electric cars, being mechanically driven by the engine. You will also lose power steering and brakes – for the same reasons (usually; some IC cars now have electric power steering – but even so, with the ignition off, the power steering usually is, too).

Not the case here.  I kept the AC cranking (and cold) as we rolled – the car silent as Omerta when that still meant something to the mob. 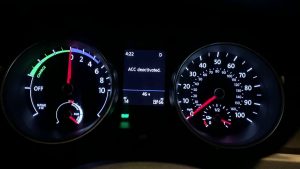 But the eGolf’s free lunch ended once I couldn’t mooch gravity.

By the time I rolled into the coffee shop parking lot – about another 10 miles of driving but no longer downhill and so requiring energy to keep the car rolling – the VW’s estimated range remaining was down to 117.

In fact, better than good in that it only took a net 23 miles off the fully-charged 140 miles of range indicated at the start of my trip  to make the approximately 34 mile drive from my place down to the coffee shop half-way/turnaround point.

On the other hand, it also works out to about 23 percent of the eGolf’s range – in gas engined terms, a quarter of a “tank” to go 34 miles. 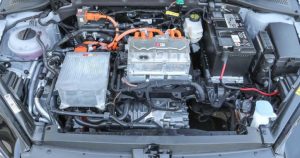 The eGolf seems “thirstier” than it actually is because you start out out, effectively, with less than half a “tank” relative to what’s typical for most IC cars, including the non-electric Golf – which can go 300-400 miles on a tankful.

But I still had three quarters of a “tank” (117 miles of range) left at the mid-way point of my drive.

Or so I thought.

Going back up the mountain, the VW’s range remaining began to fall as dramatically as it had been rising on the way down.

All the gains made coming down were lost going up. 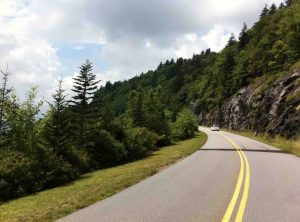 The “needle” went from just a bit less than three-quarters “full” at the coffee shop to just over a quarter left (58 miles of range remaining) by the time I made it home.

If it used gas, the eGolf could rightly be called a hog.

A bigger “tank” – battery pack – would fix this perceptual and functional problem. 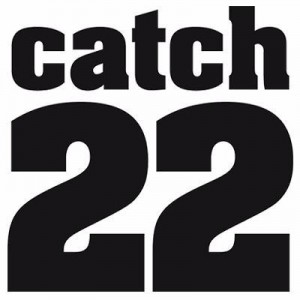 But you do get more than 150 miles of range now.

It’s an economic – and functional Catch 22.

For an electric car to be as all-around practical as an IC car, it needs to be able to go at least a couple of hundred miles on a charge – no matter how or where you drive.

Because of the time it takes to recharge.

It’s true some people will put up with waiting 30-45 minutes at a “fast” charger – or arrange their drive (and day) so as to recharge when convenient. Some people will also put up with the useless back seats of a high-performance sports car.

But most people just want to get going – and are used to being able to do that without an exorbitant wait or having to plan their day around it.

And that means fewer people can afford it.

The eGolf as it is costs $10k more than the standard (non-electric) Golf. How much more would it cost to give it a battery strong enough to go a solid 200 miles, whether uphill or downhill, before needing to plug in?

How much are people willing – and able – to pay for that?

It’s a question no one seems to want to ask, much less answer.

The eGolf is an interesting car. A neat car. It’s even a fun to drive car, god help me for saying so.

But it only has enough range to be realistically practical as a short-hop city/commuter car.

Which means the eGolf – like all currently available cars – is still a specialty car, just like a high-performance sports car or jacked-up 4×4. It has some real strengths – and some real weaknesses.

It’s not for everyone – and probably never will be, unless the cost comes way down or the range goes way up.