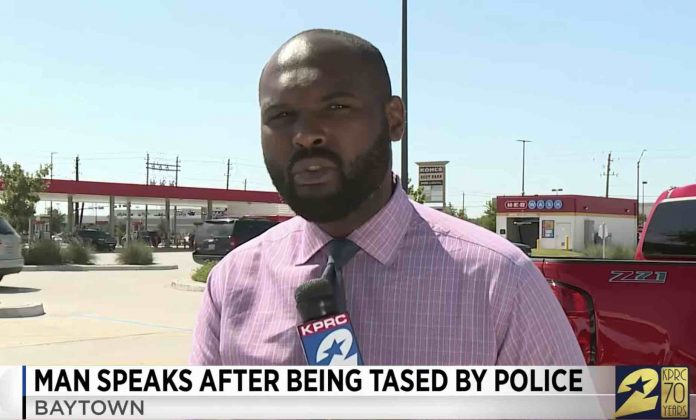 We are told that being “cooperative” with armed government workers is the best way to avoid being Hut! Hut! Hutted! by them. Here’s more evidence to the contrary.

A Baytown, Texas man was doing absolutely nothing illegal when he was accosted by a pair of armed government workers in a gas station parking lot. The AGWs made vague assertions of nothingness about the man’s actions. The man – baffled, but certain of his innocence of illegal activity – freely consents to a pat down and then freely gives the AGWs consent to rummage around in his car. After a few minutes the man – becoming annoyed – asks: “When am I free to go”?

The AGW says: “Whenever” – and almost immediately attacks the man, jerking his arms behind his back and threatening to “drop” him. The man is then put into a chokehold and Tasered; he was subsequently charged with . . . “resisting” his tormentors.

These charges have been dropped – and no other charges were filed. The man had prescription antibiotics in his car.

But no illegal anything.

His actions were those of an innocent man. But he was treated as presumptively guilty – by vicious armed men acting under color of law. It appears there was nothing he could have done to avoid being Hut! Hut! Hutted! by these thugs with badges.

He submitted – and obeyed.

It did not matter.

The Hut! Hut! Hutting! was a foreordained fact.

Given that AGWs will Hut! Hut! Hut! regardless of the “cooperation” of their prey, it is arguably sound policy to not cooperate – in terms of making their despicable job any easier than it already is (AGWs having effectively unlimited power to do whatever they want to do to us). The upside to not being “cooperative” – in terms of not giving them permission to search your person or your vehicle – being that after you’ve been Hut! Hut Hutted! it is possible a court might throw out whatever “evidence” the AGWs acquired by the non-consensual search they performed.

But the Hut! Hut! Hutting! itself is largely unavoidable the moment AGWs have decided that you are going to be their prey today.