Classic muscle cars were defined by their brawny V8s – it was the whole point of the thing. But it’s not necessary to buy the V8 to get brawny performance out of a modern muscle car.

If you buy a new Mustang – which is available with a 332 horsepower turbocharged four cylinder engine.

This four cylinder makes more power and performs better than classic-era Mustang V8 engines –  including the 1970 Boss 302 Mustang’s V8. At the time, it was one of the highest-performance V8s you could buy. 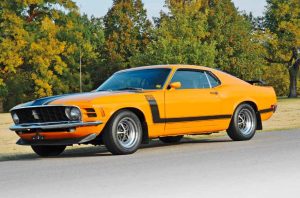 But the times have changed.

Mustang is the Coke of cars – everyone knows what it is, even if they aren’t car people.

Ford has been building them continuously and successfully since 1964 – making it the only muscle car to have survived not only the muscle car era of the ’60s but also the Disco era of the ’70s, the Reagan era of the ’80s and the Ricer era of the ’90s and still be alive and kicking today.

Its primary rivals – the Dodge Challenger and Chevy Camaro – both got cancelled and had to be resurrected. Neither was able to maintain the intergenerational following the Mustang has sustained since its inception. 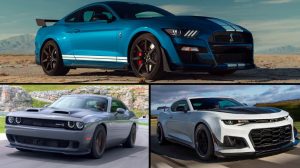 Prices start at $26,670 for a base coupe with the 2.3 liter turbocharged four cylinder engine and a six-speed manual transmission.

It comes with an even more powerful version of the GT’s V8.

There’s also an ultra-performance GT500 Mustang – which will be reviewed separately. 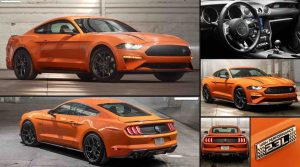 A High Performance Package for Mustangs without the V8 is now available.

It’s basically a GT – for a lot less. 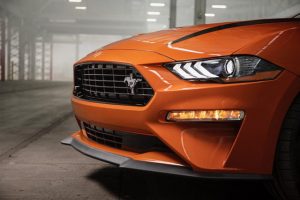 V8 is still available – for even more performance.

Center console storage cubby is tiny and hard to access because it’s set back too far in relation to the driver.

The Mustang’s standard 2.3 liter turbocharged four cylinder engine makes an impressive 310 horsepower. Impressive – because it’s more power than a ’70 Boss 302’s 5.0 liter V8 made (290 hp) even when you “spot” the old Boss the unrealistic SAE gross horsepower measuring method that was in use when it was new. 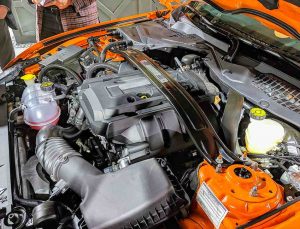 If the ’70 Boss 302’s output were measured using today’s SAE net method – an off-the-line production engine (not a specially tuned ringer engine) installed in the car with all accessories attached and a full production exhaust system – as opposed to the ringer engine on a stand, with open headers and no accessories to sap its power – the ’70 302’s rated output would probably be around 250, net.

But even when compared with a modern V8 performance engine rated using the more realistic SAE net standard, the 2.3 liter four’s output is stupendous. A ’95 Cobra R’s 5.8 liter 351 V8 which was almost three times the size only made 300 hp, net.

And the ’95 Cobra R was a race car with a fuel cell – and without power anything – that Ford didn’t sell to the general public. 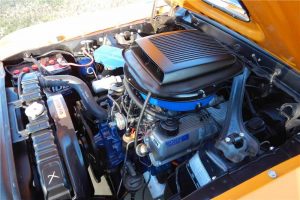 It didn’t have AC, a radio – or even back seats. Your had to have an SCCA road racing license and know someone inside Ford to get your mitts on one.

And it was slower than a base 2020 Mustang with climate control AC, a stereo, power everything and back seats – that anyone can buy.

Yes, we live in good times – despite all the bad things. 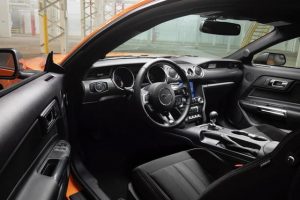 Which explains why the four cylinder Mustang is quicker than the not-cheaper V6 Camaro.

And much quicker than the also not cheaper V6 Challenger – which only has 305 horsepower (and just 268 ft.-lbs. of torque) to leverage much more weight (almost 4,000 lbs.) than either the Camaro or Mustang’s mills have to deal with.

It’s also the only one of the three that comes only with an automatic.

It is, however, the only one of the three that’s available with all-wheel-drive – though an automatic-and-AWD-only muscle car is as strange a beast as a flightless bird. 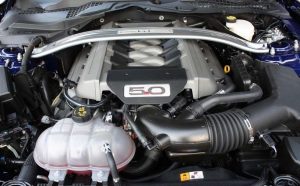 As with the turbo four, the V8 can be paired with a ten-speed automatic in lieu of the standard six-speed manual transmission.

Even without the performance package, the standard, as-it-comes turbo four Mustang gets to 60 in the high fours – a time any classic-era V8 muscle car (and the ‘90s-era Mustang Cobra R) would have been envious of. 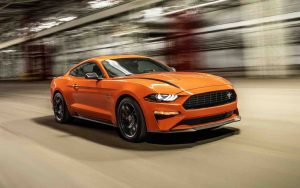 With the upgrades, the four cylinder Mustang can get to 60 in the mid– fours.

That is almost as quick, seat-of-the-pants-wise, as the V8-powered GT.

But the 2.3 liter Mustang does quick more affordably.

What you’re getting here, by the way, is basically the old Focus RS in a much more appealing rear-drive layout. Quicker, too – because the rear-drive layout is better for hooking up all that power. More appealing because – well, look at it. The Focus wasn’t an ugly car but it was fundamentally an economy car. 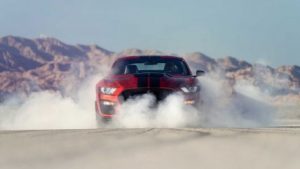 The Mustang is a Mustang.

Also, burnouts are much more fun.

The V8 GT is almost too much. It is ridiculously powerful. If you could teleport one back to 1970, it would humiliate every Ferrari – and make every muscle car seem pathetic. Today, it makes almost any six-figure exotic look like a a waste of money.

As recently as the ’90s, exotic money got you exotic performance. Something no else had who didn’t have the coin. That ’95 Cobra R – I was lucky enough to get one to play with for a week and remember it like yesterday – was exotic . . . in relation to what was generally available. Today, that R is merely collectible – a cool relic of a slower time.

Considering the new GT, I considered it in relation to the BMW 850i I test drove recently. Both similarly laid out (two doors, four seats and about the same overall size) with mighty V8s under their hoods and staggering performance capabilities. But the GT costs about a  third what the BMW does. You could buy two of them – add superchargers to them to create your own home-brew GT500  – and still have enough money left over to cover gas and insurance bills for the next ten years. 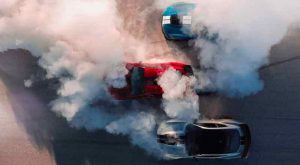 It’s true the 850i is slightly quicker. And it handles a bit better – in theory. But in reality, the truth is that either car has capabilities higher than the abilities of any driver who isn’t a race car driver – or at the level of one. The difference in capabilities is also so splitting-hairs fractional that the only way to tell the difference is by instruments. Could you tell the difference, seat-of-the-pants, between 0-60 in 3.8 seconds vs. 3.6?

If you said yes, I say bullshit.

The BMW is a magnificent car and a stunning performer. But so is the Mustang. It even offers an electro-magnetic automatically self-adjusting suspension system (MagnaRide – available with either the four or the eight) that lets this car handle washed-out (and washboarded) gravel roads better than most SUVs and ride as comfortably as that six-figure BMW.

The main thing you’re getting, then, when you buy the BMW or some other six-figure exotic is exclusivity.

Not that there’s anything wrong with – as Seinfeld used to say.

One of the Mustang’s appeals is its recognizability. Everyone knows what it is – and most people like it. It transcends ages – and the sexes. It’s as beloved by people who like sporty cars as it is by people who like ferocious cars. 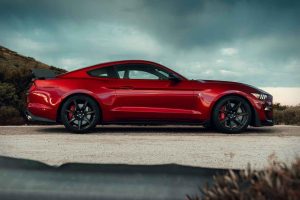 It succeeds by alienating almost no one.

This is important – if you want to stay in business. The Camaro – for all its merits as a performance car – is an alienating car. It appeals to young guys and older guys who want to feel like young guys again and to almost no one else. Most women – of all ages – hate it.

Which makes it harder for men to buy it.  Which means it’s got a limited buyer base. Which means it will probably get cancelled . . .  again. 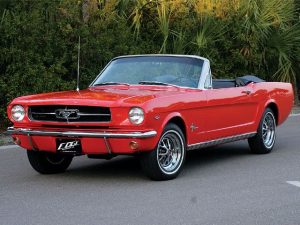 The Chevy is also a much less practical car than the Mustang – which has a people-feasible back seat with 29 inches of legroom and a trunk with almost as much room – 13.5 cubic feet – as a mid-sized sedan. The Camaro his becoming an almost-Corvette, without the cachet. It has vestigial back seats that are functionally useless for passenger carrying (24 inches of legroom and practically no headroom) and a purse-sized (9.1 cubic foot) trunk that’s got less room for carrying cargo than some motorcycles have.

The Challenger is more practical than either the Mustang or the Camaro – because it’s a much larger car. It has 33.1 inches of backseat legroom and a 16.2 cubic foot trunk – more trunk than many full-size sedans. 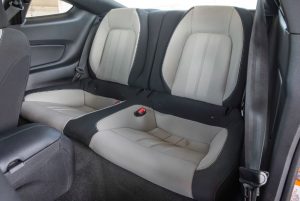 But the Challenger is almost a foot longer than the Mustang (197.9 inches vs. 188.5) and several hundred pounds heavier. It is a wonderful – but hulking and brutish – car that (like Camaro) is polarizing; it mainly appeals to men who don’t need to kowtow to the women in their lives.

Inside the Mustang, you’ll find a melding of retro-themed styling elements such as ’60s style fonts for the speedometer and the iconic galloping pony logo, which is also projected holographically underneath the open doors at night – along with modern tech, including selectable driving modes, LED mood lighting and Ford’s PassConnect suite of apps (keyless/remote start, 4G WiFi and smartphone access to various functions).

You can replace the standard gauge cluster with  a configurable LCD digital gauge cluster that changes with the drive modes. In Track mode, the speedo – which you don’t need to worry about it you’re on the track – is replaced by a huge tachometer spread along the entirety of the display’s outer perimeter – so you can see at a glance where you are in the powerband.

An active exhaust system can be specified  as well. What this means is basically a wastegate in the piping that bypasses the muffler when . . . activated. This reduces backpressure and amps up the sound.

You can also get – and I recommend – the available Bang & Olufsen 12-speaker surround sound audio system.

It may no make as sweet a sound as the ’95  R’s 351 V8 did (I can still hear the the reverb off the tiled walls of the Baltimore Harbo Tunnel at 130 MPH at 2:20 in the morning, on my way to New York to visit a girl I used to know) but it’s close – and you can listen to other sweet-sounds, too.

There are two other things to love about the Mustang that have nothing to do with its power or its looks.

It doesn’t have ASS – Automated Stop/Start. Not yet. The current Mustang dates back to the pre-ASS era of about five years ago, so it’s one of the very few 2020 models you an buy without it. 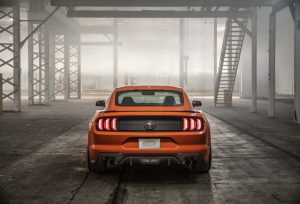 And it comes standard with a pull-up lever emergency brake – not a push-button parking brake.

One more thing. In addition to costing less to buy – and feed – than the V8 GT, the 2.3 liter Mustang should also cost less to cover – a big consideration for the younger buyers who are the Mustang’s target audience.

If you haven’t driven a four lately, maybe you should!