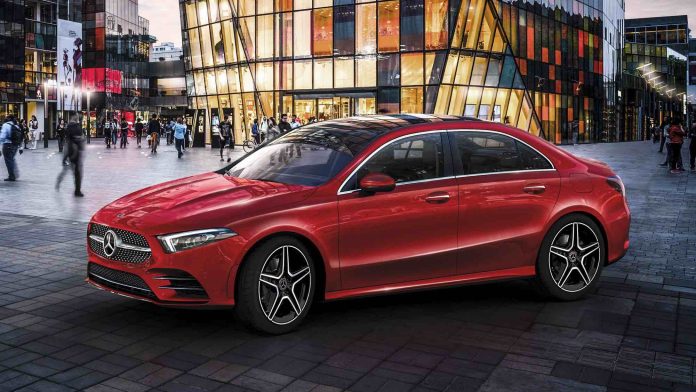 There’s a leveling going on. A good one, for once.

Entry-level new cars are expected to come standard with features that used to be available only in luxury cars – AC, power pretty much everything; a pretty good stereo, etc. And entry-level luxury cars like the new Mercedes A-Class come standard with – or offer – features that as recently as two years ago were only available in top-of-the-line Mercedes models like the E and S-Class sedans.

The equipoise and placidity of someone who’s got it made. 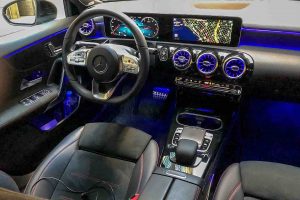 These features – and more features – have trickled down to entry-level models like the new A-Class, which also offers features you couldn’t get at all even in a six-figure S-Class just two or three years ago, like an augmented reality driving directions system that projects street names and other details on a livestream video feed in the driver’s line-of-sight.

You do get less car  . . . physically.
The A is smaller on the outside than the E or the S.

But size is about the only point of difference.

The A is Mercedes new entry-level subcompact sedan. 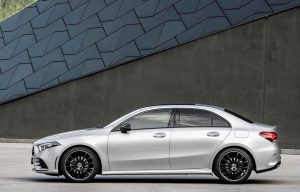 It occupies more or less the same spot in Mercedes’ lineup as the CLA “coupe” – which is actually a sedan and priced similarly that’s about the same overall size as the A – but with a much lower roofline (hence “coupe”) and much less head and legroom.
Especially in the back.

The more upright A may not be quite as dramatic-looking as the CLA – but it’s just the ticket is for people who need a practical small luxury sedan.

That, by the way, is loaded Camry territory. 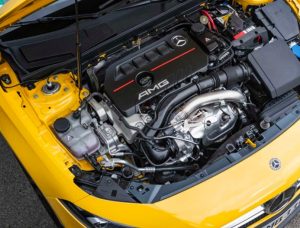 The A-Class is Mercedes’ latest class.

Mercedes will also be offering a high-performance AMG version of the A-Class as 2020 rolls along – probably by next summer. The A35 AMG will have at least 302 horsepower (the standard A has 188) and be capable of doing the 0-60 run in 4.6 seconds.

Which – for the record – is quicker than S-Class AMGs used to be not all that long ago.

FWD is better in the snow than RWD (and makes buying AWD less necessary, if you live where it snows a lot). 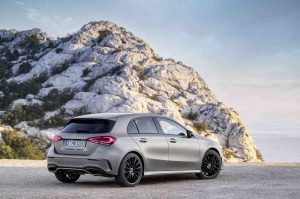 Looks like we’re not getting the hatchback version that’s available in Europe.

Gets E-Class pricey when optioned out.

Both the FWD and AWD versions of the A come standard with a 2.0 liter four cylinder engine, turbo-boosted to 188 horsepower and 221 ft.-lbs. of torque. 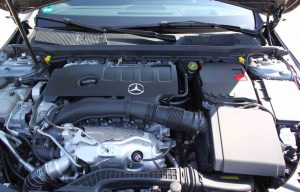 Whether you stick with the FWD version or choose the 4-Matic AWD version, the A gets to 60 in about 7 seconds, according to Mercedes.

Gas mileage isn’t usually a major selling point for a luxury car, but the A can tout almost-economy car MPGs: 24 city and 35 on the highway for the FWD version and nearly the same for the AWD version (24 city, 34 highway).

The fact that the A is a FWD-based car is a selling point – for people who want better traction in snow than you get with a rear-drive car  . . . unless you buy it with AWD. 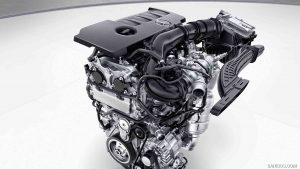 The A goes both ways.

Which lets you skip the other way – with less risk of getting stuck.

A FWD car with good snow tires can be more tenacious in poor weather than an AWD car with sport tires – which negate the snow-advantages of AWD – in part because of the tires, of course.

But also because of the weight.

Of the engine, over the powered wheels. The weight pushes down on the wheels, helping the tires to bite, which  is what helps to keep you from getting stuck. It is also better – from a snow-day point of view – to pull rather than push. 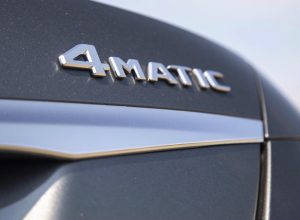 There is cost to consider, too. Not having to buy AWD -in order to avoid getting stuck when it snows – is another perk of the FWD layout. You can buy the AWD for even more grip. But the FWD version doesn’t lack it.

The main downsides of FWD used to be torque steer – the tendency of the front wheels (and so, the steering wheel) to jerk to the left or right under hard acceleration, as the tires fought to put the power down and steer the car.

That’s been all-but-eliminated from modern FWD cars via the traction/stability control system. 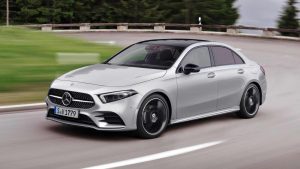 Small cars aren’t supposed to feel big, but the A manages to not feel small while delivering the  solid – and quiet – ride people who buy luxury cars expect.

It is a front-wheel drive car, so it understeers a little when driven hard – but most people who buy luxury cars don’t, so that’s less an issue than quiet (and smooth) which the A gets . . . As for.

Viewing the road ahead from just behind the widescreen instrument panel (and viewing the holographic info display projected into the driver’s line-of-sight) it is very easy to imagine being the pilot of an E or even an S, especially at night – when the cabin is bathed in the soothing ethereal glow of the best ambient interior lighting system in the business. It is the same system that you’ll find in the E and the S and other much more costly MB models and no one else’s system comes close.

Even the air vents glow.

Turn on the massaging seats; turn up the 12 speaker Burmester surround-sound audio system 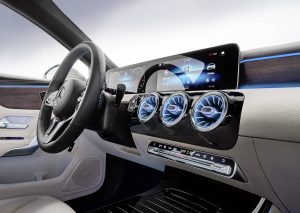 The biggest difference between the A and the E or the S – and also price-comparable non-luxury sedans – is performance.

As measured by the stopwatch, at least.

Zero to 60 in 7 seconds isn’t slow by any means – and the Benz feels stronger than the numbers suggest because the little four’s peak torque is available at just 1,250 RPM – but the car is about two seconds slower than a V6-powered Camry or turbocharged Accord.

They, of course, do not (yet) offer massaging seats – but the differences there are getting hair-splitting. And when cars like the Camry, Accord, et al do offer things like massaging seats, it will apply pressure on luxury brands like Mercedes to amp up the performance to put some distance between what they sell and what is sold by brands like Toyota and Honda. 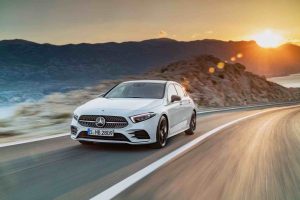 The pending addition of the A35 AMG will also put some air between the A and Camrys and Accords, et al.

The A is only abbreviated from the windshield forward  – and the decklid backward. In between the axle centerlines, the car is actually about the same size as an E. (Check out the size of the doors relative to the rest.)

And feels it, once you’re inside. 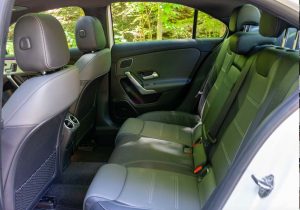 What may impress you more, though, is how much roomier the A is vs. the size-equivalent CLA.

Actually, the size-slightly-larger CLA, which is 182.3 inches long bumper to bumper vs. 179.1 for the A. But the CLA only has 27.1 inches of backseat legroom – a difference of almost a foot! The A also has a couple of inches more headroom in both its first and second rows – 40.3 inches and 37.2 inches, respectively – vs. 38.2 and 35.4 inches in the swoop-roofed CLA

The one area where the A seems small is its trunk – which the specs say holds just 8.2 inches (vs. 13.1 for the CLA). But the stat is misleading. The A’s trunk may not have as much depth or width but its length belies the stated volume of space available. 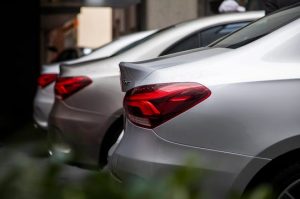 Pop the trunk; see for yourself.

Though the AMG A35 isn’t available just yet, you can get some of the AMG hardware, including upgraded brakes with drilled rotors and contrast-color powder-coated calipers, a lowered suspension and 18-inch performance wheel/tire package, AMG-tuned steering and AMG exterior/interior trim, including a sport steering wheel with paddle shifters and aluminum pedals. 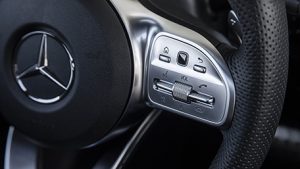 The center console-mounted trackpad is ergonomically designed to conform to the shape of your hand but it can be difficult to use it accurately while the car is moving. It’s easier to actually touch the main LCD display to access/operate the app you want.

Brilliantly simple and ergonomic is the steering wheel-mounted thumbwheel for the audio system/volume. 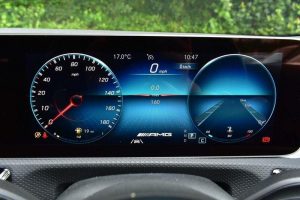 Mercedes offers the full load of high-end ssssssssaaaaaaaaaaafety electronics in this one – including a very pre-emptive elaboration of Lane Keep Assist Benz calls Evasive Steering Assist (which can and does abruptly brake the car and steer the car when a tire so much as touches as painted line on the road) plus Emergency Stop Assist and a really cloying one styled Active Speed Limit Assist.

Yes, it does what it sounds like it does.

The good news is if you prefer not to be “assisted,” this is all optional. Just skip the bundled Driver Assistance Package. 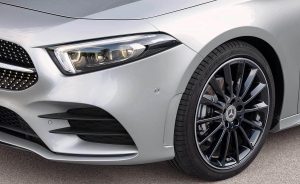 Us the funds saved to buy the much more appealing massaging seats or the very suave augmented reality driving directions, which is actually of much more assistance than all the ssssssssssssssaaaaaaaafety electronics detailed above. Street signs are often small – or not even there – making it hard to read them before you pass the street. The Benz system pipes this info into the car (via GPS mapping)  before you pass where you wanted turn.

ASS – Automated Stop/Start – is (sadly) unavoidable. This system – which kills the engine whenever the car isn’t actually moving – has become a de facto standard “feature” in all new cars as the car companies struggle to eke out fractional MPG gains and reductions in carbon dioxide “emissions.” 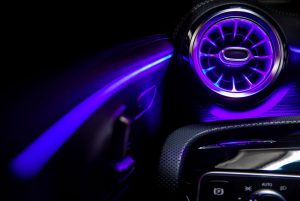 ASS is more than just a PITAS, too. It will almost certainly result in faster battery death caused by multiplication of discharge/charge cycling from all that stopping and starting, which wears out a battery. Instead of getting four or five years out of one, you’ll get three or four – the cost of battery replacement (about $100) probably more than negating the trivial fuel savings over the same time period.

No “concern” is ever expressed, either, by “environmentalists” about the increase in throwing-away of batteries (full of nasty acid and unpleasant lead) caused by ASS. 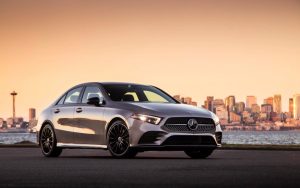 ASS also turns off engine-powered accessories like the AC. So you shvitz while you wait for the light to turn green.

At least ASS can be turned off.

The only thing missing here is a couple of feet – and the six figure price.