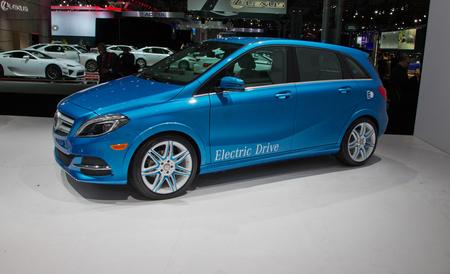 And so they’ll try to sell another electric Turducken.

Mercedes-Benz USA spokesman Rob Moran confirmed the vehicle’s demise, telling the trade publication Automotive News that production would be phased out in the third quarter.

Mercedes will halt B-class Electric Drive assembly in Rastatt, Germany, as it converts the plant to production of next-generation compact vehicles in 2018, Moran said. Mercedes will continue to produce gasoline- and diesel-powered versions of the B-class hatchback, but those are not sold in the U.S.

Mercedes has sold just 3,651 of the B-class Electric Drive since it went on sale in December 2013. Sales were initially limited to the small number of states that follow zero-emission vehicle mandates. It was later offered to dealers in non-ZEV states but never widely carried in the U.S. dealership network.

“Due to our strategic focus on [connectivity, autonomous driving, sharing and electric drive systems] for the mobility of the future, we are planning the step-by-step electrification of our portfolio,” Moran wrote in an email. “Moreover, we are evaluating the production of our new generation of electric vehicles at all of our locations of Mercedes Benz Cars.”

Parent company Daimler AG has said it is investing more than $11 billion to bring more than 10 new electric cars to market by 2022. Many will be launched under the EQ subbrand announced last year. Company executives have said EVs could account for up to 25 percent of global sales by 2025.