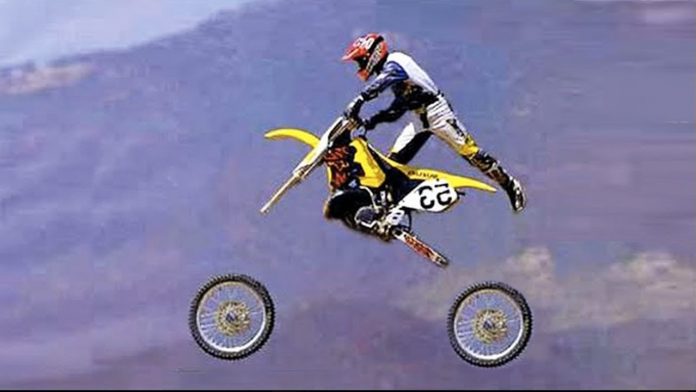 A good friend of mine called me a couple of weeks ago, worried about her ’92 Toyota truck. The transmission was acting up. She couldn’t shift it into – or out of – gear. But only after she’d been driving it for awhile.

This gave me a good feeling about what was probably wrong with her truck’s transmission – because my gut (and experience) told me there probably wasn’t anything wrong with the transmission.

I suspected there was something wrong with what was in the transmission. Or rather, what wasn’t in it.

No enough of it, any rate. 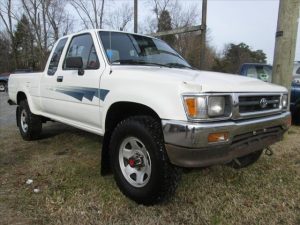 The fact that the transmission only acted up after she’d driven it for awhile suggested the hard-shifting was the result of increased friction, caused by increased heat . . . caused by not enough gear lube to keep things meshing smoothly. And sure enough – and luckily enough – when I removed the upper fill plug nothing dribbled out.

It’s supposed to dribble a little – if there’s enough lube in the box. You should at least be able to feel some on your finger if you stick it in the hole. I did – and mine came out dry.

I could have just topped it off. But that would have left whatever much-abused (overheated) lube was still in the transmission still in the transmission. It would be like not changing the oil filter when you change the engine oil – only worse because most manual transmissions do not have filters at all. So if you leave old, burned-up lube in the box, it – and all the fine metal shavings – will blend with the fresh lube and circulate freely, probably shortening the transmission’s life. 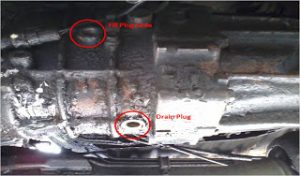 Besides, I was curious to see what the remaining fluid looked like. So I removed the drain plug – and found out.

A couple of pints out of the eight that should have been in there poured out like Dickenesian gruel – only I didn’t say, “Please sir – may I have some more?” The stuff was dark brown verging on black – probably because it had been cooked. I let it drain until nothing remained, saving the ugly pool of goo to show the truck’s owner.

Then I added eight pints of fresh – and honey-colored – lube to the transmission, which I swear made purring sounds as I did so. This job, if you’ve not done it, looks tough but is mostly just messy. It’s easier if you use a hand pump to transfer the lube from the bottle it comes in to the transmission. Or you can use AMSOIL – which comes in a clever squeeze bag which eliminates the need for the hand pump. But if you haven’t got a pump – and don’t use AMSOIL – you can use a section of flexible rubber fuel hose to feed the lube into the fill hole from the plastic bottle most other brands of gear lube come in. Cut a length of line to suit, put one end on the bottle’s nipple, the other in the hold . . . and squeeze! 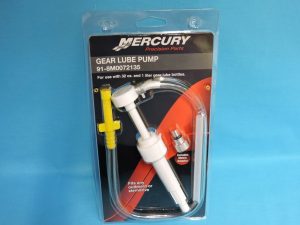 Be sure to fill until the transmission dribbles. Make sure you’re not getting a false positive. Wipe the area outside the fill hole clean to make sure. If a little lube is seeping from the hole, you’ve filled it. Now install the plug, being careful not to overtighten it. Most transmission cases are made of aluminum – and if you want a problem that’s not easily fixed, you don’t want to crack the case. A little more than hand tight is usually just about right.

I lowered the truck and started her up. But I didn’t drive – not just yet.

I let it idle in neutral for a couple of minutes (clutch out) to give the fresh lube a chance to circulate and deliver some much-needed lubrication to those parched synchros and gears. Then, muttering a prayer to the Motor Gods, I put her in first, let out the clutch and took her for a drive. 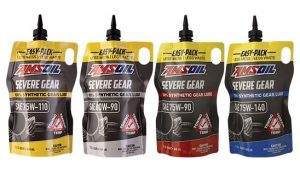 No trouble shifting into second, third, fourth or fifth. After half an hour – to make sure – I smiled, knowing my friend would not need a new transmission. That this “repair” – which was really just maintenance – only cost her about $60 for the lube and a home-cooked dinner for me.

But it could have cost her that – if she hadn’t called me (or someone) to check. Small – and easily remedied – things of this nature can become big and expensive things when not remedied in good time. If she’d run that transmission 60 percent empty for much longer, $60 bucks and a home-cooked dinner would not have fixed it.