What follows is just a taste of the serial eructations of a Clover whose persistence is truly indefatigable. This Clover –  variously styling itself “LH” and then “Alex” – was greatly triggered by an article I wrote about a month ago about the very different reaction of armed government workers to people thumbing their noses – and giving the finger – to their Authority vs. the reaction to AGWs goading people and beating the crap out of them.

The Clover – not very intellectually discerning – saw my article as a defense of hooliganism (the kids thumbing their noses – and giving the finger – to Authority took video of themselves doing burnouts on the highway, mocking the AGWs) rather than an indictment of AGW priorities.

I tried explaining this at least a half dozen times to this Clover- but I might as well have been trying to teach the proverbial pig to sing.

Anyhow, I just got the following and thought I’d share… so you’ll know what I mean when I say . . .  and they ask me why I drink! 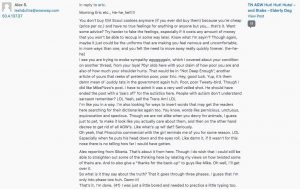