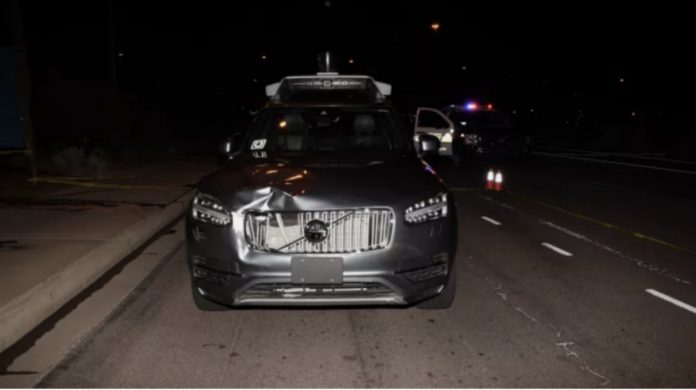 Now we know who’ll be held criminally accountable when a “self driving” car kills someone.

It will be the person who wasn’t driving it.

Herzberg was walking her bicycle across the road when the driverless car ran her over, killing her.

Vasquez was reportedly watching a reality TeeVee show when the car struck Herzberg.

Neither Uber nor Volvo have been charged – but Vasquez has just been indicted on a charge of negligent homicide, a serious felony that entails the possibility of time in prison upon conviction as well as the likelihood of financial ruin from the civil suit which will follow – and which will be predicated upon a successful conviction.

The prosecutor in Maricopa County says “Distracted driving is an issue of great importance in our community” and that “When a driver gets behind the wheel of a car, they have a responsibility to control and operate that vehicle safely and in a law-abiding manner.” 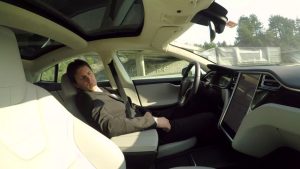 Because it raises the vital question: Vasquez wasn’t driving the car. The car was driving itself, as it was designed to do by Volvo and meant to do, by Uber. What is the point of a self-driving car if it requires a driver?

Isn’t it all about relieving the driver of the “responsibility to control and operate the vehicle”?

To – ultimately – eliminate the driver altogether?

That is what Uber (among others) wants, at any rate – drivers costing money and not always being reliable. Which as it turns out neither are self-driving cars. Not just Uber cars and not just Volvos, either.

But the difference is that self-driving cars aren’t held responsible for recklessly driving themselves; nor the people who programmed and pushed them and put people like poor Vasquez in the bizarre position of being held responsible for what the car does. For what it was designed to do.

Or doesn’t – such as notice a person walking across the road and apply the brakes instead of the gas.

If the driver is expected – is legally obliged – to drive the driverless car then the whole thing is bizarre, Kafkaesque. It is like No meaning Yes except it really means No even when she says it means Yes.

And then charging the poor guy with rape.

Which is essentially what has happened to Vasquez, who happens to be female – but the point stands. She was given a car that drives itself, then held responsible for letting it.

This isn’t an accident.

Yet NHTSA has not decreed that self-driving cars must be locked down – taken off the road in the interests of public safety. Just as it has not issued a decree that new cars may not be built with built-in LCD touchscreens which encourage people to take their eyes off the road while driving to use.

Just as it has forbidden people with known-to-be-defective (and very lethal) air bags to even temporarily disable them.

The point being that NHTSA isn’t a “safety” apparat. It is an apparat of the burgeoning technocracy apparat, which intends to control literally every aspect of our lives, including our mobility.

Thus, certain technologies are given a hall pass.

Those technologies which further the aims of the technocrats.

So-called “self-driving” technology being the main one as regards mobility because it holds the promise of total control of mobility. The end goal is indeed a car without a driver. A car that drives where (and how) it is programmed to drive – and not programmed by you.  A car that won’t drive at all if the technocrats so decide – based on your not being a Good Citizen, as defined by them. One can envision such a car equipped with Advanced Face Diaper Assistance technology, for instance. If you have not Diapered your Face (or had your shots) the car will not move. It may not even open the door.

Or it may lock the doors – with you inside. To await the Diaper (or shot) police.

In the meanwhile, Vasquez faces as much as six years in prison for what amounts to turning the radio on. If the Volvo that killed Herzberg didn’t have self-driving technology then Vasquez would have had to drive it and in that case, would have been responsible for driving it.

But to hold her responsible for using the car’s technology – the thing it was designed to do – is of a piece with charging a man with rape for having sex with a woman who invited him into her bedroom, took off her clothes, said come hither . . .  and then screamed stop! in the middle of the act.