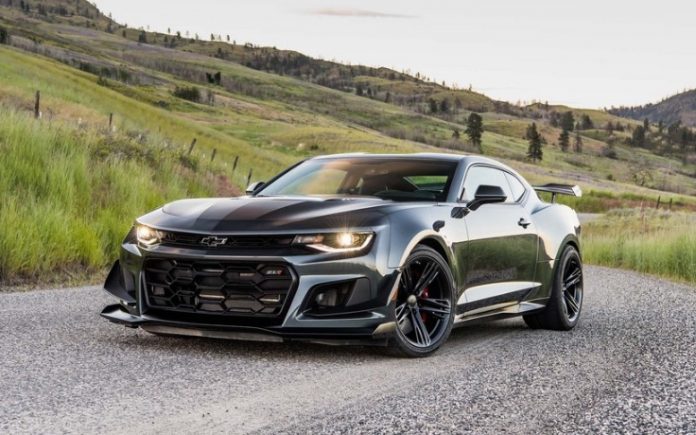 There’s no Z28 Camaro anymore – but it’s hardly necessary, if you want to go fast. The standard Camaro – with a four cylinder engine – outperforms the V8 Z28s of the ‘60s and ‘70s.

And if that’s not enough, there’s always the V6.

Chevy’s almost-Corvette, with two more seats – and a much lower price tag.

The base 1LS trim stickers for $25,000 and comes standard with a 275 horsepower 2.0 liter turbocharged four cylinder engine, paired with a six-speed manual transmission. An eight-speed automatic is available optionally. 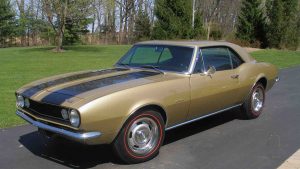 Moving up to the 1LT trim – which stickers for $25,500 – gives you the option to upgrade to a 335 horsepower V6, also paired with a standard six-speed manual transmission.

And if that’s not enough, there’s the SS – which stickers for $37,500 to start. It comes standard with a 6.2 liter V8 (shared with the Corvette) that makes 450 horsepower, once again paired with a six-speed manual transmission.

But for some, even that is not enough.

Convertible versions of all are available as well.

An upgraded version of AppleCarPlay/Android Auto is now available.

Four cylinder Camaro is quicker than most classic-era V8 muscle cars – and twice as economical.

V8 Camaro is a killer, period.

All Camaros have poor outward visibility due to chopped roofline.

Back seats have five inches less headroom than up front due to the chopped roofline.

All Camaros have less room for cargo than the Corvette – which only has two seats. 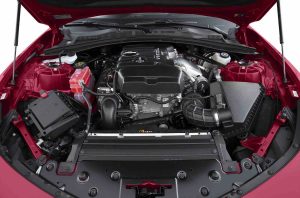 More horsepower, actually – because back in ’67, horsepower was advertised differently. More optimistically. Using what was then known as the “gross” method – which meant measured with the engine on a stand, not saddled with accessories and a production exhaust system with mufflers. Using the “gross” standard, the new Camaro’s four would have rated well over 300 horsepower back in ’67.

And no matter how you measure it, the four gets much better gas mileage: 22 city, 31 highway with the six-speed manual and slightly better with the optional eight-speed automatic. In ’67, the Z28 came only with a four-speed manual – and it was a lucky day if you managed 16 MPG . . . on the highway. 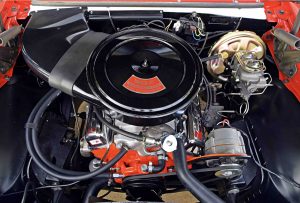 With the optional 3.6 liter V6, a Camaro is even quicker. Zero to 60 in about 5 seconds flat, which beats every V8 powered Z28 made from 1967 all the way through 2002. There is almost no penalty to pay – at the pump – for choosing this engine, which is almost as economical to operate (19 city, 29 highway) as the four.

Then there’s the 450 horsepower V8-powered SS. It is not almost as economical to operate as the four – but it’s not terrible, either. In fact, 16 city, 24 highway is pretty good for a 6.2 liter V8 that can get you to 60 in just under 4 seconds. 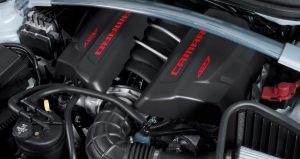 Finally, there is the 650 horsepower supercharged version of the same engine. This one makes more than twice the power of the original 1967 Z28’s “high performance” 5.0 liter V8 and gets to 60 more than twice as quickly – and still gets better gas mileage than a ’67 Z28 did.

As bad as some things are right now, in some ways we have never had it this good.

But for different reasons. 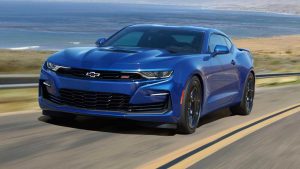 The Camaro – whether you pick the four or the six or the eight – is a powerful and easygoing car; the ’67’s engine was high-strung and erratic, because it wasn’t really meant for the street. It was meant for SCCA road racing – where the engine is always revving and you’re constantly shifting. The new Camaro’s engines can be raced – but are as at-home on the street (and in traffic) as what you’d find under the hood of a Corolla or Civic. 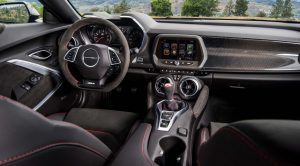 Also fun is that you can still get the Camaro with a manual – with any engine – which is also becoming a rare thing, even in performance cars. Many exotics are now automatic-only, in part because so many people under 40 can’t drive stick and also because objectives now trump intangibles. A given car with an automatic is generally quicker – and more predictably quick – than the same car with a manual. Electronics – launch control – and perfectly timed (by the computer) automatic shifts deliver better ETs than a human-shifted manual and make it easier to be quick, every time.

Objectively, the automatic is superior. It never misses a shift. It always shifts at exactly the right moment in a zero-to-60 drag race.

The manual is more intangibly enjoyable. Especially with the 3.6 V6 engine, which can be and likes to be spun to its 7,000 RPM limit. It’s arguably the sportiest of the three choices, especially if you like to shift for yourself. 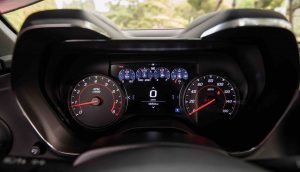 Historically, fours – especially in heavy cars – did not work well with automatics. They lacked gumption in the lower RPM ranges and so struggled until you got them revving, which of course is hard to do with an automatic transmission when you’re starting out from a dead stop. But the Camaro’s 2.0 engine (like many of its type) is a down-low engine, in the good sense of that term – because of the turbo bolted to it. Which spins – and boosts – so the engine doesn’t need to.

Peak torque – 295 ft.-lbs., which is more torque than the V6’s 284 ft.-lbs. – is available at 3,000 RPM rather than 5,300 RPM (for the V6) and this makes it ideally suited for use with the automatic, which works better with engines that produce abundant low-RPM torque. They have a torque converter that amplifies the low-end grunt – and that’s why torquey engines and automatics work well together. 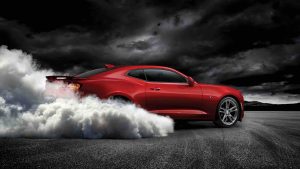 Same goes for the V8, which makes even more torque. The SS can lay rubber at will – even when the Camaro is already rolling. It is great fun to begin a burnout at 25 MPH. Just take it easy at first – until you get used to just how much torque is on tap. The SS Camaro’s 455 ft.-lbs. of torque makes it as easy to get sideways as thinking about it – which is also big fun, assuming you’re ready for it.

You can also leap over Priuses in a single bound, almost.

But, there is a hair in the soup and it is the current Camaro’s horrendous outward visibility, especially to the rear and sides – because of its very low roofline and abbreviated side/rear glass. You sit low, almost as if in a tank – think of the Brad Pitt movie, Fury. Make sure before you pull out into traffic. 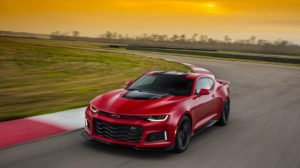 The car is also very wide  – 74.7 inches vs. 72.3 for the ’67 – and while that doesn’t sound like much on paper, on the road – especially narrow country roads – it feels like a lot of Camaro to keep in between the painted lines. The obnoxious Lane Keep Assist will rattle you constantly because it is almost impossible to not tread on one or the other painted lines in a car this wide.

But this is a Camaro you can drive to work every day – which is something classic Camaros like the ’67-69 Z28 were not. This includes even the ZL1, which has more power under its hood than two ’67 Z28s had under theirs – and performs like an all-out race car while managing to be almost as economical to drive as a V6-powered family sedan.

If only GM made more cars like this one. 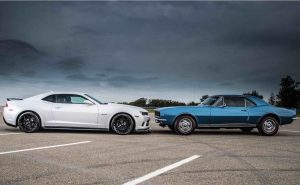 The new Camaro is also a long car. It is 188.3 inches bumper to bumper – about four inches longer overall than that first 1967 Camaro, which was 184.6 inches end to end.

But it isn’t a roomy car.

Especially in the back. Muscle cars are notorious for having tight back seats – and the Camaro’s got those, with only 29.9 inches of legroom. But it’s the abbreviated headroom that makes the back seats for gym bags only. The car’s roofline chops the available head space down from a viable 38.5 inches for the driver and front seat passenger to a hopeless 33.5 inches for the people tucked in (literally) the back. 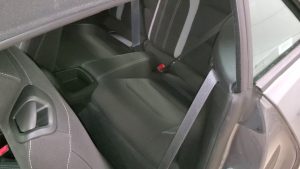 In Camaro’s defense, the also swooped-roof’d Ford Mustang is almost equally passenger-impaired, with just 34.8 inches of headroom in its backseats. The Mustang does, however, have a decent-sized (13.5 cubic foot) trunk while the Chevy has a practically vestigial 9.1 cubic foot trunk.

A Corvette has 12.6 cubic feet of cargo space and in that respect is more practical than the four-seat (sort of) Camaro. 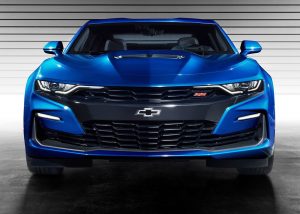 Camaro sells well in spite of its ridiculous back seats and horrendous outward visibility issues – which says something about the strength of its intangibles. Some people hate this car- but that accounts for why so many love it. The thing is not meant to please everyone and so greatly pleases some – and that is how you keep the fire burning.

Performance upgrades are available with every Camaro, even the base LS with the 2.0 liter four. There is a stand-alone high-performance Brembo brake package on the options list and if you get the V6 LT you can get a Track Package that bundles the Brembo brakes with heavy-duty cooling/suspension and exterior body kit for enhanced high-speed aerodynamics.

Also – as it was and long has been – there is huge aftermarket support for Camaro. Engine parts, suspension parts, custom interior and body parts. It is possible to make your Camaro unique in a way that is much harder to do with other cars, which haven’t got scores of aftermarket companies making parts for them.

1967 is a long way back – but is also available at your local Chevy dealer, brand-new and fully warranted.