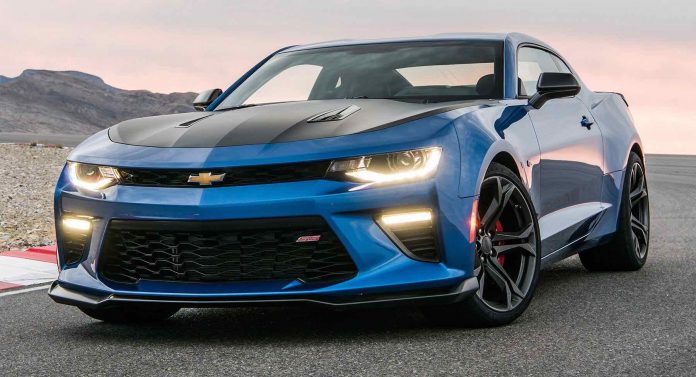 The Chevy Camaro has always been a more practical Corvette.

Similar performance when ordered with its available V8  – which is the same basic V8 you get in the Corvette, detuned slightly (on paper, at least) for appearances-sake  – but for a lot less money and with at least two things you can’t get in a Corvette:

An extra pair of seats.

There may not be much legroom in those back seats anymore, but they’re still there. They make it at least possible to take more than one passenger along for the ride without strapping him to the roof..

You can also get something surprising in the Camaro: Not-bad gas mileage. 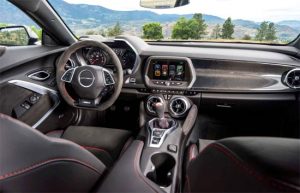 Although it is a rear-drive muscle car, it’s available with a fuel-efficient turbocharged four cylinder engine that can get 30 MPG on the highway. That’s only about 5 MPG less than most current front-wheel-drive economy cars get on the highway.

And front-wheel-drive economy cars do not get to 60 in 5.4 seconds.

The turbo-four Camaro can.

And with its optional V6 and V8 engines, it can get there even sooner.

The Camaro and its two rivals – the Ford Mustang and Dodge Challenger – are living legends connecting the present to the past, a time when Americans couldn’t get enough horsepower – and were still able to afford it.

There are plenty of high-powered rear-drive performance cars available today – but not many of them are available for the $25,000 Chevy asks for the base-trim LS Camaro, which comes with that potent turbocharged four cylinder engine mentioned above, a six-speed manual transmission and better performance (along with much better gas mileage) than almost all of the V8 muscle cars of the late ‘60s and early ‘70s delivered.

To get there any quicker, you’ll have to give up the extra seats – and get a Corvette! 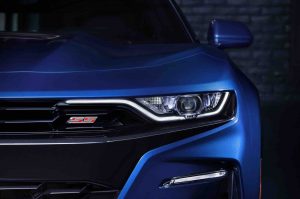 All 2019 Camaro trims get updated front and rear styling, too.

There is also a credible rumor that Chevy will bring back the Z28 – possibly packing a 700 hp version of the Corvette’s V8 – sometime during 2019.

It’s got back seats. 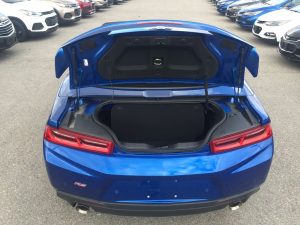 Those back seats have not much legroom (about 24 inches) and much less legroom than the backseats in the Mustang and Challenger.

Corvette has almost twice the trunk room (15 cubic feet vs. 9 in the Camaro).

Low-cut roofline and raked rear glass can make it hard to see what’s outside from the inside.

Unlike its two muscle car rivals – which only offer two engines – Camaro is available with three. 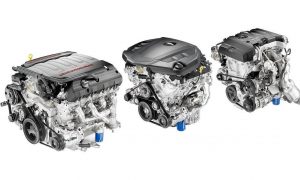 The Ford Mustang offers a similar engine as standard equipment: a turbocharged 2.3 liter four that makes 310 hp and which is slightly more economical (21 city, 31 highway) and delivers slightly better performance (zero to 60 in 5.1 seconds).

The Dodge Challenger is the only one of the Big Three that still comes standard with a V6 (3.6 liters, 305 hp) but it’s much slower (zero to 60 in about 6.1 seconds) because it is much heavier (by about 600 pounds) and it is automatic-only when ordered with this engine.

Both Camaro and Mustang  come standard with six-speed manual transmissions with their turbo’d four cylinder engines. 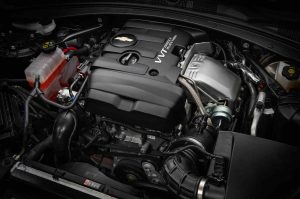 The Dodge is, however, uniquely available with all-wheel-drive (V6 versions only, for now). But an automatic-only/AWD (and so no burnouts) muscle car is kind of like a cheeseburger without the cheese.

Two more numbers to consider: 16 city, 27 highway. The 1970 Z28 was a magnificent beast but it couldn’t touch 27 MPG on the highway unless it was being towed and had its engine off. No overdrive gearing in those days. It was a four-speed manual or a three-speed automatic. 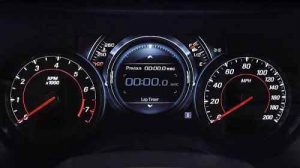 The 2018 Camaro has two more gears in its standard manual transmission and five more in its optional eight speed automatic (with the turbo four and the V6).

Neither the Mustang or the Challenger have middle engines; to get more power/performance than their standard engines offer, you have to buy the top-of-the line GT Mustang or the R/T Challenger, both of which come with V8s  . . . and a much  higher sticker price than the Camaro V6. 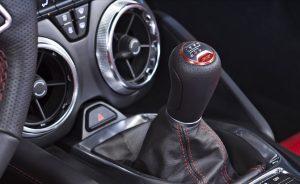 It’s nice that Chevy offers a more reasonably priced but still high-performing version of the Camaro. You can also put the $7-8K you saved toward the Track Package that’s available with both the turbo four and the V6 Camaro. It outfits the car with almost all the enhancements you’d get in the V8 SS Camaro, but for under $30,000. 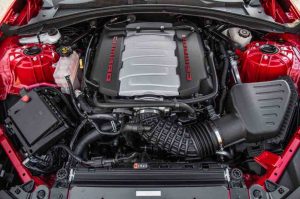 Speaking of the SS.

It comes standard with a 455 hp 6.2 liter V8 and your pick of either the the six-speed manual or (uniquely) a ten-speed automatic. Either way, this version of Camaro can bullet to 60 MPH in 3.9 seconds. A pleasant surprise is that despite almost twice the displacement vs. the V6, a 100 hp upgrade and a massive performance upgrade, the thing is still capable of 16 city, 24 highway – only slightly thirstier than the V6.

Assuming, of course, you can resist making full use of those 455 horses. 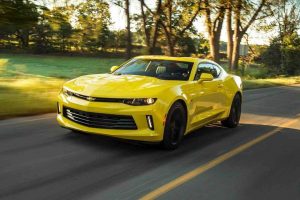 Whether you buy the four, the six or the V8, you’ll get where you’re going in a hurry.

Your dilemma will be whether to get where you’re headed even more quickly by going with the V6 or at light-speed with the top-of-the-line V8.

The turbo four is arguably the most interesting Camaro powerplant.

It’s affordable and its mileage is exceptional, but without any real sacrifice in performance vs. the more expensive V6. The difference in 0-60 capability is so tight that a turbo Camaro driver with faster reflexes – who drops the hammer first and bangs off quicker shifts – will be able to outrun a lesser driver behind the wheel of the V6 Camaro. 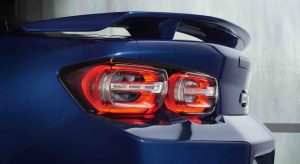 The turbo four also feels stronger at part-throttle in the low and mid ranges  . . . because it is. There’s more torque (295 ft.-lbs. vs. 284 ft.-lbs. for the V6) and the four’s torque peak arrives at 3,000 RPM vs. 5,300 RPM for the V6. There’s less need to spin the four – and it works really well with the optional automatic – something one usually has to be concerned about with four cylinder engines in heavy cars.

But not in this car.

The V6 has its merits, too – especially since the Mustang doesn’t offer one anymore and the Challenger V6 doesn’t offer a manual transmission to go with it. The latter is kind of like the low-performance versions of the GTO Pontiac offered in the ’60s; all hat and no cattle, as they say in Texas. 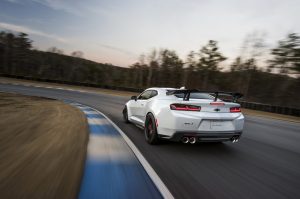 The result is a kind of Mexican standoff, acceleration-wise. 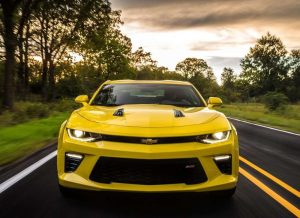 The Ford is capable of edging out the Chevy – but only just barely and assuming both drivers are equally competent. The real difference is in terms of feel. Camaro is arguably more faithful to the brutal performance ethic that defined the original muscle cars of the ’60s and ’70s. The Mustang’s high-revving overhead cam engine is a more refined engine – not that there’s anything wrong with that.

The SS can light the tires up all the way through third gear – without calling up everything it’s got. Burnouts are not as accessible in the Mustang. It’s a finesse machine, as far as muscle cars go.

This includes its much better ergonomics and visibility. 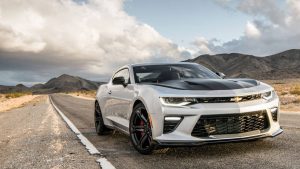 Camaro sometimes feels like it occupies every inch of pavement in between the double yellow to your left and the white shoulder line to your right. And the visibility is not just bad.

The car is much tougher to live with as an everyday driver than the Mustang – or the Challenger, which is a much larger and more easygoing car than either the Camaro or the Mustang. 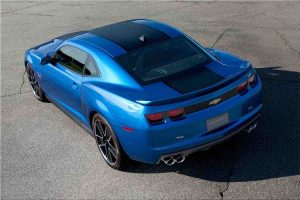 The current Camaro is the closest yet to being a hunkier four-seater Corvette. The back seats  are almost nonexistent – even for a muscle car. GM does not even publish a legroom number, but it is around 24 inches.

How brutal is that?

The Mustang has 29 inches; the Challenger 33.1 inches. That’s a five inch difference in legroom for the Ford vs. the Chevy – and almost a foot’s difference vs. the Dodge.

The car’s trunk is also very small for such a relatively big car. Just 9.1 cubic feet (7.3 cubic feet for the convertible). That is beyond brutal. 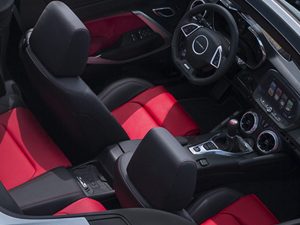 My motorcycle has more cargo capacity – no joke.

Camaro needs those back seats – to make up for the lack of trunk. You can at least put whatever you need to carry there. But – whoops! – now you can’t carry passengers back there.

While there is plenty of legroom up front (43.9 inches) headroom is marginal for drivers more than six feet tall and even shorter drivers may find the Camaro’s cabin claustrophobic. You sit really low in the thing and feel surrounded by by the high doors and the heavy-looking dashboard. 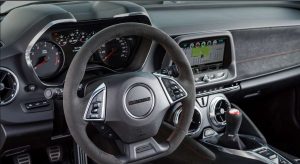 These ergonomic defects – which also result in terrible outward visibility  – really put the arm on the Camaro’s practical Corvette appeal.

Chevy ought to decide to either go whole hog and make the Camaro a two-seater or give it a less ridiculous back seat – and a viable trunk. More headroom needs to be carved out somehow – and the visibility problem needs to be dealt with.

There is a reason why the Camaro’s not selling nearly as well as the Mustang or the Challenger (more about that here). This is a car that has limited appeal beyond young singles – mostly young single males – who don’t have to care about usable back seats and a viable trunk. 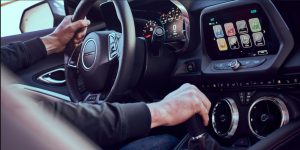 Until they aren’t single anymore.

Then it’s Mustang – or Challenger – time.

As mentioned above, you can upgrade both the turbo four and the V6 Camaros with a very comprehensive track package, which includes pretty much everything you’d get if you bought the V8 SS (including 20-inch wheels with “summer” ultra-performance) tires, launch control, and driver-selectable Competition/Track modes with shift lights and a plethora of performance readouts/data such as lap and 0-60 times, lateral G forces and other such things.

Ford and Dodge offer similar things – but most of them are only offered with the V8 versions of those cars, which means spending close to $40k to get those things.

Camaro’s a bargain in another way.

Because sales are down – due to the ergonomic issues, probably – Chevy has cut the car’s asking price significantly. But it’s more than just $1,000 off the MSRP vs. last year. Slow sales equals a better haggling position. 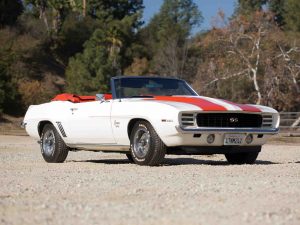 It’s a good bet you could buy a new Camaro turbo or V6 Camaro – with the track equipment – for around $26-27k or so, maybe less.

Which would  buying a new Camaro even bitchin’ – even if the back seats are ridiculous and the trunk next to useless.

Camaro has its flaws – but value, performance and economy aren’t among them.