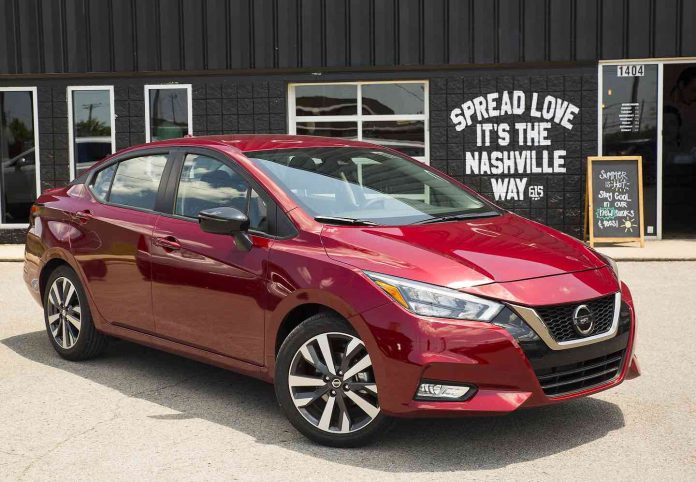 The Versa’s got a larger trunk, more room for the driver and front seat passenger and a bigger – much stronger – engine under its hood than the “compact” Civic had.

In addition to that, it’s still a car – a thing that’s becoming hard to find as crossovers take over. These crossovers are also bigger-priced than cars like the Versa, which you can buy for under $15k without even haggling over it.

Which may be the most interesting thing of all! 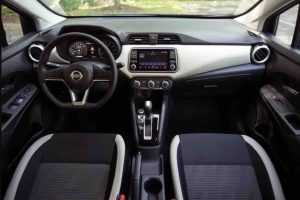 The Versa is Nissan’s most affordable – and technically subcompact – sedan.

It is also just about the most affordable new car you can buy.

The base SV trim stickers for $14,930 and comes standard with a five-speed manual transmission; you can swap that out for a CVT automatic – which bumps the price up to $16,600. 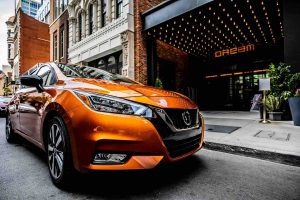 The only change for 2021 is a $100 increase in the base price of the S trim – but Nissan hasn’t increased the price of either the mid-trim SV or the top-of-the-line SR for the new model year.

A new car that doesn’t come standard with a six-year mortgage.

Standard manual transmission puts some fun into the mix – and helps keeps the price low.

Sub-$15k base price isn’t deceptive advertising; necessary features such as AC are not extra-cost. Nice features such as power windows, locks, push-button ignition, a 7-inch LCD touchsceen and a four-speaker stereo with three USB ports are all included.

Manual transmission is only available in base S trim.

Nicer features such as heated seats and adaptive cruise control are only available with top-of-the-line SR trim – and cost extra. 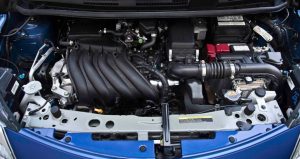 It produces 122 horsepower vs. 76 horsepower for the Mirage and manages to almost match the Mirage’s class-best 35 city, 41 highway gas mileage without making you wait 12.8 seconds to get to 60.

The Nissan gets there in 9.7 seconds, a speedy-in-comparison time, especially in view of the Versa’s ability to travel 32 miles on a gallon of gas in city driving and 40 on the highway – with the optional CVT. That’s a margin-of-error’s difference in mileage vs. the Mirage’s MPGs and in real-world driving, the Versa’s mileage may be better because it doesn’t have to work as hard to keep up with the traffic. 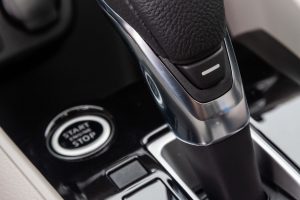 It’s a tighter race vs. the Hyundai Accent, which is equally engined (1.6 liters) and almost-equally powered (120 horsepower) and gets to 60 about as quickly while also managing 33 city, 41 highway with its optional CVT automatic.

But it does cost about $400 more to buy – which you could use to buy about 180 gallons of gas for the Versa.

All the combatants in this class are available with manual transmissions, too – which is one of the reasons they’re priced so low. Manuals are simpler and so cheaper to make and to sell than modern automatics, which have elaborate electronic controls. Manuals are still purely mechanical devices and one of the very few things you can find in a new car that aren’t much different from what you’d have found in cars 30 years.

The downside is they cost a few MPGs, because they can’t be programmed to shift exactly optimally for maximum MPGs, as modern automatics are programmed to do. Thus, the manual-equipped version of the Versa rates 27 city, 35 highway – a dip of 5 MPG vs. the same car with the CVT automatic. 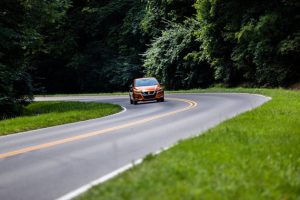 However, you save $1,670 up front – the difference in price between the manual-equipped Versa S and the same car with the CVT automatic  – and it will take a long time to earn that back by saving 5 MPGs.

Besides which, you might do better than the advertised mileage, if you know how to shift a manual for maximum economy.

Another argument in favor of the manual is that they rarely need to be replaced over the life of the car; it’s much more common for automatics to croak before the car does – and it can cost several thousand dollars to replace a burned-out CVT tranny (which sounds like something you’d find in the alley behind a gay bar, but never mind that). 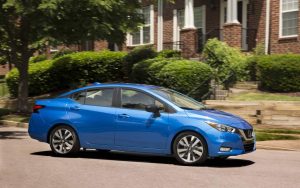 It’s a little strange driving a car when almost everyone else is driving a crossover, or an SUV or a truck. But there are advantages to being lower to the ground – including inherently greater stability when cornering and also at high speed – as well as higher fuel efficiency at highway speeds, due to lower aerodynamic drag.

It’s interesting to compare the Versa’s mileage with the much lower mileage delivered by small crossovers like the Honda HR-V, which peaks at 28 city, 34 highway.

It takes more energy to push a taller shape through the wind.

In fact, there’s not a comparably-sized crossover that goes nearly as far on a gallon as the Versa – and its sedan rivals – can go. Which is interesting given the obsession with gas mileage, as well as lowering the amount of carbon dioxide “emitted” by cars. The more gas burned, the more C02 produced – yet crossovers are replacing more fuel-efficient, lower-C02-emissions cars. 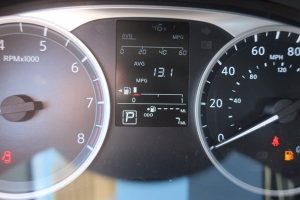 There is also the Manual Factor – which is absent from crossovers, SUVs and even most current trucks – which are mostly automatic-only. The Manual Factor gives you more to do; it involves you in the drive. And there is fun to be had wringing all the performance – and mileage – you can out of what you’ve got. Hold it in second or third; keep the revs up to keep the power up – then make your move.

if you prefer a more languid experience, go with the CVT. But do more than drive it around the block before you buy. At low speed and under light load, the CVT is very quiet and very smooth. It is a good transmission when you’re not in a hurry – and don’t need to be in one.

But if you are, it is slow – and it lets you know. 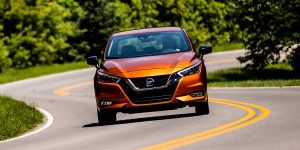 The engine revs furiously but there’s little corresponding movement. There is much corresponding noise. This is the nature of the CVT – when paired with a modestly-powerful engine tasked with getting going in a hurry. The CVT is programmed to let the engine spin to the spot in its powerband where whatever power it makes is made – which in the case of the Versa’s 1.6 liter engine is 6,300 RPM.

Which is the RPM that will be held as long as you ask the car to get going in a hurry.

With the manual, you’d shift up to the next-highest gear – and the RPMs (and noise) would decrease. 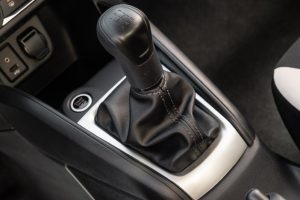 The ride is what you’d expect from a larger car, which the Versa is – by historic definitions.

The longer the wheelbase, the less bouncy the ride – and that’s the case here. The Versa is nearly as comfortable as current mid-sized sedans insofar as how it handles dips and potholes. It hasn’t got quite as much lateral grip if you like taking corners with 35 MPH advisories at 55 or faster – but that’s chiefly due to its 15-inch wheels and skinny (for a modern car) tires.

The SV, which gets 16-inch wheels, has a higher grip threshold before the tires begin to squeal and if you get the SR – which gets 17 inch wheels – tire squeal is even harder to provoke though this model’s ride is noticeably firmer due to its shorter-sidewall tires. 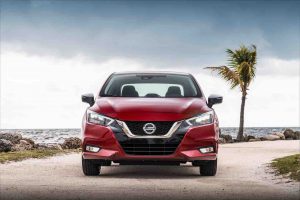 A subcompact? Only if you go by exterior dimensions – relative to today’s definitions.

The Versa is smaller overall than an Altima – which at 192.2 inches long is almost a mid-sized car by current standards and more than a foot longer overall than the Versa. 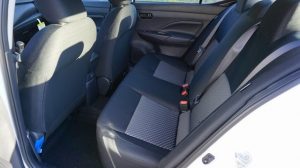 The Versa’s main worry is the Mirage, which is even more “subcompact” – but roomier than mid-sized cars like the Altima. The thing boasts an incredible-for-its size (it is only 169.5 inches long) 37.3 inches of backseat legroom, though the driver and front seat passenger only get 41.7 inches and the trunk is subcompact-sized (12.4 cubic feet).

The Accent splits the difference, with 33.5 inches of rearseat legroom, 42.1 inches up front and a 13.7 cubic foot trunk. 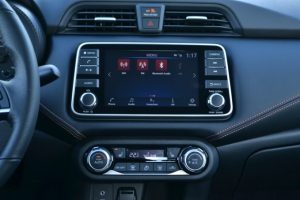 Specs aside, the Versa isn’t depressing to look at – or be in. It is small – but not pathetic. We’ve come light-years since the days of cars like the Chevette, Excel and Aspire – to name some of the low water marks. None of which could have dreamed of the standard 7 inch LCD touchscreen and full gauge package the Versa comes standard with.

All trims come standard with ball-type air vents, which let you fine-tune the direction of the breeze much more so than is possible with box-type vents that can’t pitch and roll.

Also standard is a pull-up emergency brake lever rather than an electronic parking brake button. The former is preferable if you prefer simpler – and like having more control over your car. The pull-ip lever is controlled by whatever pressure you apply; the parking brake is On – or Off – and that’s it.

It was nice of Nissan to include three USB ports as standard, enabling you – and your passengers – to charge multiple devices at once. Many vehicles a lot pricier than the Versa charge extra for more than one or two USB ports. 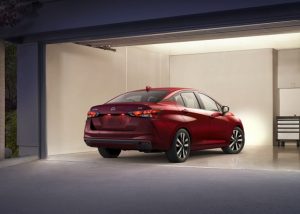 Unfortunately, you cannot get the very desirable heated seats in other than the most-expensive SR trim and then they are optional – a $400 option. They are included in the Hyundai Accent-equivalent Limited trim.

Still, it’s pretty amazing to find heated seats – even as an option – in a subcompact “economy” car.

Small isn’t what it used to be – and not just in terms of size. 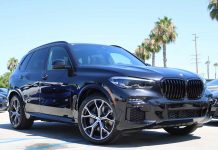 The Spectrum Meets in the Middle