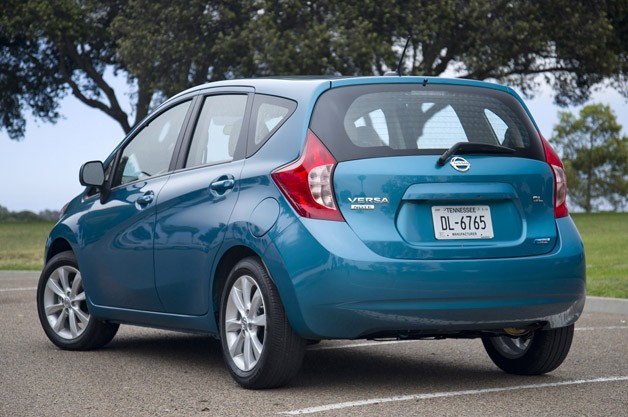 In ’07 Nissan introduced the Versa hatchback, which stood out among economy cars – literally – because it was taller-roofed and had a much roomier (almost mid-sized car’s) back seat and an open, airy feel because of its low-cut beltline and expansive glass area. Initially, it was also sportier than others in its segment. Standard equipment included a powerful 1.8 liter, 122 hp engine and a six-speed manual gearbox. 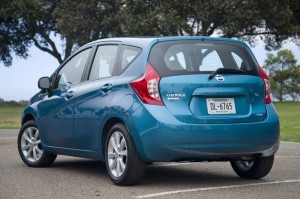 Or, you could go Blue Lite Special.

For a couple of years, Nissan offered the hatchback Versa in 1.6 form – same body, same back seat and same open-feeling cabin – just smaller engined and lower-priced.

Then, the 1.6 hatchback got dropped. If you wanted a Versa hatchback, you now had to buy the more expensive version with the larger 1.8 liter engine. A sedan version – without the additional head and legroom or the expansive glass area – but with the 1.6 liter engine and the lower price tag – was added to the lineup. 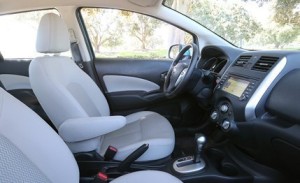 It became the “economy” version of the Versa.

Now both versions of the Versa are economy versions. Both come standard with the 1.6 liter engine. The 1.8 liter engine is gone – and so is the six-speed manual transmission.

A five-speed (or a CVT) takes its place. 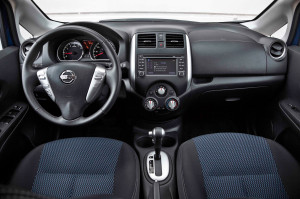 Few new cars cost less (the Versa sedan being one of the very few) and none match the Versa Note’s interior spaciousness – and outward visibility –  for the  price.

That’s not to say it’s perfect – we’ll get into that in a moment – but it is to say the Versa Note’s a strong contender for your A to B transportation dollar. 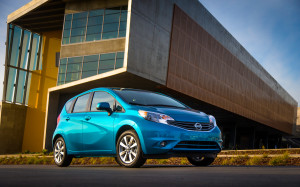 The truth is Nissan has two entry-level cars. Even though the sedan and Note are related, they are very different in looks, layout – and price. The tall-roofed Note – though shorter overall – is roomier on the inside than the conventionally laid-out Versa sedan. It (the Note) also comes with a somewhat higher level of standard equipment, such as a nicer (four-speaker) audio system (vs. the sedan’s two-speaker system), tilt wheel and power outside mirrors. You can also order the Note with features – such as heated seats – that are not available at all in the sedan. 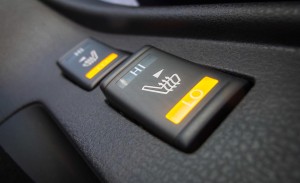 Note cross-shops include the Honda Fit – which will be significantly updated for the 2015 model year – and also the Kia Rio (base price$13,900) hatchback and Ford Fiesta hatchback (base price $14,600).

The updated 2014 Note hatchback is smaller on the outside than the previous hatchback version of the Versa, but retains the overall stubby/tall-roofed (and roomy inside) layout of the original. It actually has more room inside for passengers than the first-generation Versa hatchback – despite being about six inches shorter overall.

The sedan version of the Versa carries over unchanged. 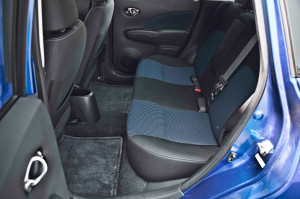 Roomier than others in this class; especially in the back seat.

Easy on the wallet – if you’re careful about adding options.

Easy on gas, too.

A bit more space for people than before. 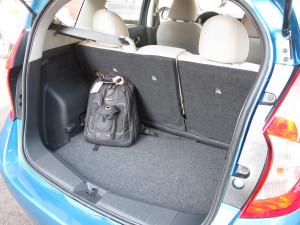 Would be more fun if it had a six-speed instead of just a five speed (or CVT).

Less space for cargo than before.

The Note’s standard – and only available – engine is a 1.6 liter, 109 hp four teamed up with either a five-speed manual transmission or (optionally) a CVT automatic.

Nissan is emphasizing economy rather than performance – and the Note does deliver. Especially if you order it with the CVT automatic. If you do, your Note will carry an EPA rating of 31 MPG in city driving and 40 on the highway – 35 MPG overall. 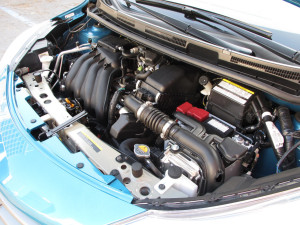 This is exceptional – especially when put into some context.

Nissan charges just under $14k for the as-it-sits Note. Choose one equipped with the optional CVT automatic (which also adds “active” grille shutters to improve aerodynamic efficiency at highway speeds) and you’re up to $15,240.

What else is available in this class that costs just over $15k and carries a 40 MPG highway rating? 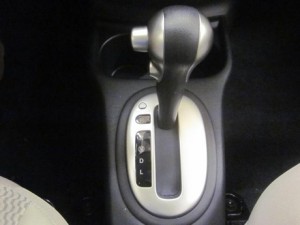 You tell me which is the more economical.

Nissan seems to understand that buyers looking to maximize their MPGs are probably not interested in a car with a lot of peripherals – and a higher cost of acquisition. It kind of defeats the purpose. 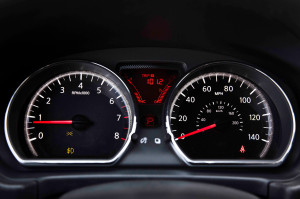 The Note’s performance is pretty good, too – again, in context. None of the cars in this class are made to fulfill a need for speed. But none are inadequately powerful for everyday driving, either.

What’s really interesting about cars like the Note – and the Ecoboosted Fiesta – is that they are quietly approaching hybrid MPGs, but without all the hybrid folderol.

Or the price tag. 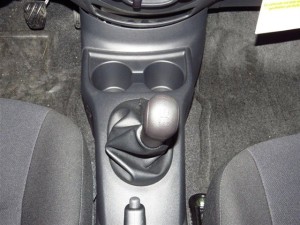 To give you some sense of this:

The least expensive new hybrid is the Toyota Prius C – which has a base price of $19,080 and carries an EPA rating of 53 city, 46 highway. Yes, the city number is impressive, but don’t focus on that unless all (or most) of your driving actually is city driving. In mixed-use, city-highway driving, the C’s mileage is in the mid-high 40s. That’s still very good – but is it good enough to justify the (roughly) $4,000 price difference between it and a car like the Note? 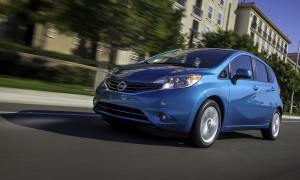 The new Note’s smaller 1.6 liter engine may not have a barnful of oats, but because the Note is both smaller and lighter than the first generation Versa hatchback (2,412 lbs. for the ’14 vs. 2,693 lbs. for the ’12) the current car accelerates about as strongly as the original with the larger (and stronger) 1.8 liter, 122 hp engine – while also achieving better EPA numbers.

However, once up to speed, the noice settles down to normal new car levels. And the Note has surprisingly long legs. At 80 – which is about as fast as one may legally drive in any state and faster than one may legally drive in most states – the tach reads about 2,800 RPM. It’ll go considerably faster than 80, too – but that’s not particularly relevant for a car such as this.

What is relevant is that it’s got enough speed to get the job done – and then some.

The ride, on the other hand, can sometimes be on the bouncy side. This is probably due in part to fairly spongey suspension settings but likely is made worse by the short wheelbase (102.4 inches) and tallish profile. I’ve driven the Versa sedan and it feels a bit more planted – a bit less bouncy – even though it shares the same wheelbase and probably has more or less the same basic suspension as the Note hatchback. 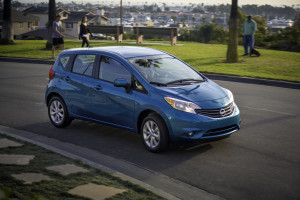 On the other hand, the car’s superb all-around visibility gives the car a very real everyday advantage over other cars with high beltlines, sloping roofs, thick B and C pillars and Pop Tart-sized sloping fastback rear glass: You can actually see what’s going on around you.

And what’s coming at you.

Roll up to a “T” intersection in the Note and you can readily see traffic to your left and right. No having to creep forward – into traffic – to clear the B pillar – in order to be able to see what’s coming. It’s also nice to have that open, almost greenhouse feel. The car seems more cheerful because you’re not hunkered down in a rolling bathtub. The only improvement I’d suggest is that the currently fixed-in-place front quarter windows be made operational – like the vent-wing windows cars commonly had back in the ’60s and even into the ’70s. This was a low-cost way to keep a car’s interior cool and pleasant on a hot day without having to run the AC – and waste fuel.

it’s an idea that ought to be resurrected. 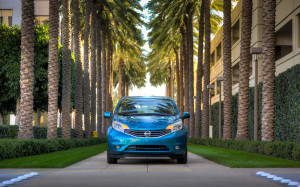 But the Note’s cargo capacity has been buzz cut. 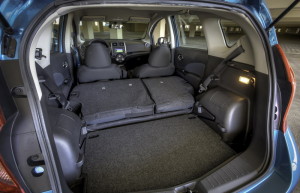 Total capacity (with the second row of seats  folded flat) is way down: 38.3 cubes for the ’14 vs. 50.4 for the first-gen. Take six inches off the car and this is the result. But, Nissan jiggered the available floor space such that with the second row seats up, the ’14 has 21.4 cubes of space for cargo behind them . . . vs. 17.8 for the previous hatchback Versa. This was done, keep in mind, without sacrificing second row legroom – which is close to half an inch greater in the new car.

The Note may be smaller than it was, but it’s still bigger than the others where it matters most.

The Kia Rio, for instance, has an impossibly cramped back seat: 31.3 inches of legroom. The Fiesta’s slightly worse: 31.2 inches. Seven inches difference (Note’s backseat legroom space vs. these two) is the difference between adult-viable and for-the-kids-only. 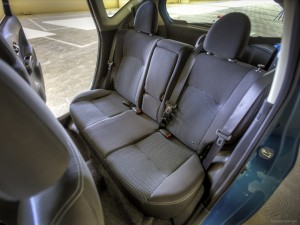 Both the Rio and the Fiesta also have – or rather, don’t have – the noggin clearance in the back seats that the Note does.

The Note remains one of the very few small – and low-priced – hatchbacks that’s not too small to be other than a commuter car, a single person’s car or a second car. It could absolutely serve as a family’s primary – or only – car. (We’ll have to wait and see what Honda has in store. The 2015 Fit – not out at the time of this review – could be very competitive on both price and space. It’s due to be unveiled this summer or fall. There is no 2014 Fit, fyi.) 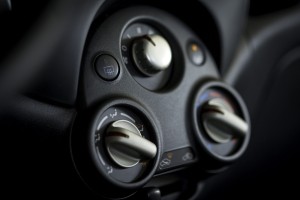 In a sense, the Note is an automotive Tale of Two Cities. It can be a cheapie (though it’s not currently sold in the “stripper” version Nissan previously offered, the one without AC, no radio at all and no power anything) or it can be loaded with leather trim and power everything – including pushbutton start, heated seats, ambient interior lighting, a GPS system with 5.8 inch LCD touchscreen and streaming audio. Also offered is Nissan’s pretty cool 360 degree perimeter camera system – which shows you (from a bird’s eye perspective) everything that’s around the car – not merely what’s behind it.

The base S trim comes with the essentials (AC, a stereo system) for A to B service, with the only downside to it being that it comes only with the five-speed manual transmission (which means you only get a 36 MPG-on-the-highway EPA rating). If you want 40 MPG (and the CVT) it’s necessary to move up to the S Plus trim (or higher). 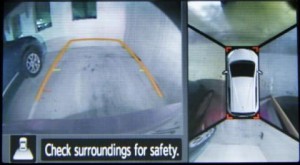 A clever feature – standard on SV trims – is an automatic horn honk when you’ve filled the tires to the correct air pressure. This really ought to be standard on all trims, though. A cargo divider system that lets you hide away items such as laptops and cameras is also available – but costs a couple bucks extra.

I am a big fan of the simple, functional rotary knob controls for temperature control and fan speed. Touch-sensitive pads (all the rage now), scrolling menus and mouse inputs only make it more complicated to adjust the heater/AC and fan speed. It’s not an improvement. Just a gimmick used to justify the ever-higher-price-tags of cars so afflicted.

The note is one of the few you can still buy new that’s not so afflicted.

Speaking of which: There’s – still – no obnoxious “belt minder” buzzer in the Note (and all current Nissan vehicles). Just a light on the dash. 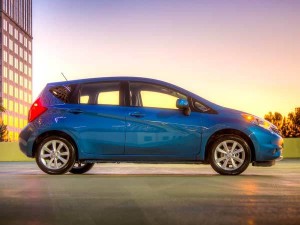 Though smaller now than it was before, the Note is still more car (and gas mileage) for the money than its rivals.

And that’s ultimately what the Note is all about.