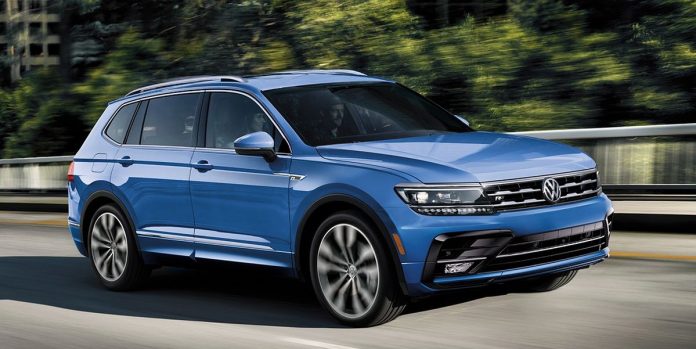 Getting three rows of seats without getting something big – or pricey – isn’t easy.

Because there aren’t many.

In fact, there’s just one now – the 2021 VW Tiguan. The other two compact-sized crossovers previously available with three rows of seats – and without a big price – no longer are. Dodge dropped the Journey – and Mitsubishi isn’t currently selling the seven-passenger Outlander (the five-passenger Sport is still available).

The only other small crossover that seats seven is the Kia Sorento. But its starting price is much larger – $29,300 vs. $25,245 to start for the Tiggy. 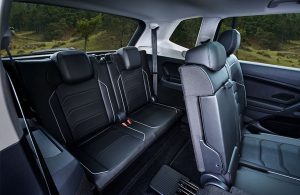 Which pretty much leaves this three-row VW in a class by itself.

The Tiguan is one of just two compact-sized, three-row crossover SUVs remaining on the market now that Dodge has dropped the Journey and the regular Mitsubishi Outlander is off the market . . . momentarily.

But in the meanwhile, the only other option – without going larger – is the much more pricey Kia Sorento.

Tiggy prices start at $25,245 for the base S trim Tiggy with front-wheel-drive; adding the optional 4Motion all-wheel-drive brings the MSRP up to $26,545. 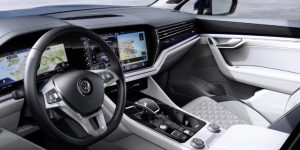 Major upgrades for the new model year are an 8 inch, glass-surfaced LCD touchscreen and the addition of adaptive cruise control in SE and higher trims.

Seats seven in a five-seater size – for thousands less than the next-closest in size and seats.

Standard 2.0 liter turbocharged engine is less powerful than it used to be. 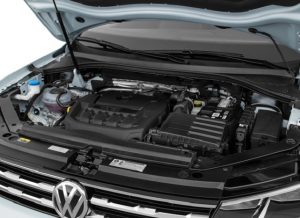 So it’s not surprising that the VW is quicker by about 1 second to 60, getting there in just over eight vs. just over 9 for the Sorento.

You can speed things up in the Kia if you buy its optional engine – a higher-powered version of the 2.5 liter engine that makes 281 horsepower. The Tiggy doesn’t offer an engine upgrade, at least not in the United States. 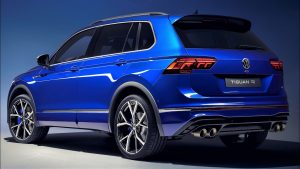 And maybe the Kraken will come. 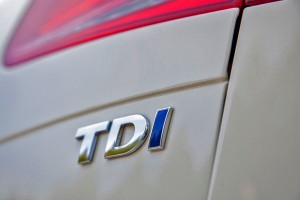 The chief functional deficit that comes standard with both of these small crossovers is the lack of ability to pull much – even relative to cars.

Most people would probably rather have the 16 horsepower back – but the government wants the higher mileage, even if it’s only trivially so. And car companies – not just VW – must please the government even if it costs their customers.

Even sadder, the Tiggy used to be available with a diesel engine capable of delivering 34 MPG in city driving and 46 on the highway. But “concern” over trivially higher (as in fractionally, angels-dancing-on-the-head-of-a-pin higher) emissions of oxides of nitrogen and the attendant grotesquely exaggerated/hysterical media coverage of VW’s “cheating” on federal emissions certification tests put the kibosh on an engine that delivered about 20 MPG higher mileage on the highway and 10 MPG higher mileage in city driving.

So much for “concern” about mileage.

PS: The diesel-powered Tiggy was available with a manual transmission, too.

And it could tow twice as much as the current gas-engined/automatic-only Tiggy. 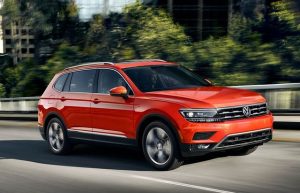 The Tiggy was one of the first modestly priced small crossovers to come standard with a punchy turbocharged engine –  when it came out as a new model back in ’07.

Which was a long time ago.

Fast forward to now and most crossovers come standard with a punchy turbocharged engine. Except – luckily enough for the Tiggy – its only remaining direct rival, the Kia Sorento.

The Tiggy isn’t much more powerful than the Sorento – but it feels more powerful, because of its turbocharged engine, which makes its maximum power (its torque) sooner – at lower engine RPM – and so with less apparent effort. Leaving a parking lot to comfortably blend in with traffic going 45 doesn’t require flooring the VW’s gas pedal. 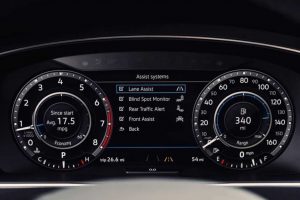 A manual would make it a lot more fun – and diesel would make it much more economical – but the government has seen to it that neither of those previously availables are available today.

This has rendered the Tiggy – which was once a standout in this class – nondescript.

Which is offset vs. its primary rival by the fact that the Sorento is also nondescript – and much more expensive. This is a good thing for VW because if the Sorento cost about the same, it’d be harder to choose between the two, the two being so much the same – excepting the Tiggy’s stronger-feel on the lower end and its more relaxed power delivery across the powerband.

But it’s sad to see the Tiggy reduced from what it was – which at one time was the most powerful (in 200 hp guise) and most economical (in TDI form) and most entertaining (with its formerly-available manual transmission) small crossover you could buy, irrespective of what it cost.

It’s not bad by any means now; it’s just not as good as it was.

But it’s still better than the Sorento – and that may be enough, for now.

The Tiggy is the smallest of the small/three-row bunch. Just 185.1 inches long – which is only about 8 inches longer than a small sedan like the Honda Civic, which does not seat seven. It is as easy to park as a small car like the Civic – but with the ability to carry another two people or carry five and 65.7 cubic feet of stuff in its cargo area.

But the Tiggy only seats seven if you buy the SE and up – and AWD, which all costs extra. 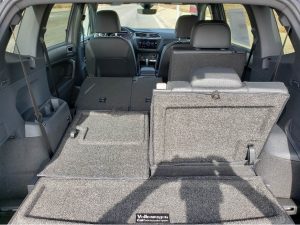 The Sorento – which is a little bigger – 189 inches end to end – doesn’t charge extra for the extra seats, which come standard in all trims.

But it does cost more, regardless.

It also does not offer the VW’s almost-Audi “digital cockpit” instrument panel with driver-configurable views and the almost-Audi vibe that comes standard in the Tiggy – because it’s made by the same company that makes Audis.

With a couple of exceptions.

One being that the base S trim Tiggy comes with just one USB port and a smaller-than-Sorento 6.5 inch LCD display for the apps and stereo. The Sorento comes standard with multiple USB ports and an 8 inch screen – which is available in the Tiggy but only in the SE and higher trims. In both of these small crossovers, you have to move up one trim from the base (S and LX, respectively) to get heated seats.

A small area of difference between the two is the Tiggy’s lower ride height (7.9 inches of clearance) vs. the Sorento (up to 8.2 inches) which comports with the VW’s more on-road sporty than off-road-ready demeanor. Kia also offers driver-adjustable Snow mode for the AWD system in the SX Prestige Line, with increased angles of approach and departure – making it more suitable for unpaved adventures.

Also, if you don’t need the third row, the second row version has 73.5 cubic feet of total cargo space; the second row also travels 7 inches fore and aft and if pushed back all the way, the backseaters enjoy more legroom than the driver and front seat passenger. 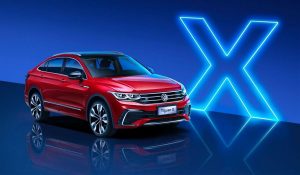 One upside to the fallout over the diesel “cheating” fiasco is that VW has upped its standard comprehensive warranty coverage to five years/60,000 miles – up from three years/36,000 miles previously. But it’s a small consolation prize for the loss of the TDI option.

Some consolation – if you can wait about six months – will come when the ’22 Tiggy arrives. The dope is that the now-optional 10-inch digital cockpit and the larger 8-inch glass-surfaced secondary touchscreen that come standard in the current SE and higher trims will be made standard in all ’22 Tiggy trims – along with an exterior refresh.

It will be interesting to see whether VW decides to bring the slope-roofed version of the Tiggy – the Tiggy X, recently revealed in China – to North America.

It will also be interesting to see whether VW keeps the cost of the ’22 Tiggy in line with the cost of the ’21 – especially once we know what features the also-on-deck-for-an-update 2022 Sorento will get – and how much it will cost. 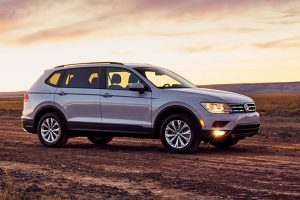 The third card in the deck is the next-generation Mitsubishi Outlander, also slated for a summer/fall ’22 introduction. Mitsu has long been the value proposition in the segment and it’s likely the new Outlander will continue that tradition.

That will bring the number of compact-sized/three-row crossovers back up to three – and make the competition hotter for the Tiggy.

This little VW has the seats – without the size. Or the cost.