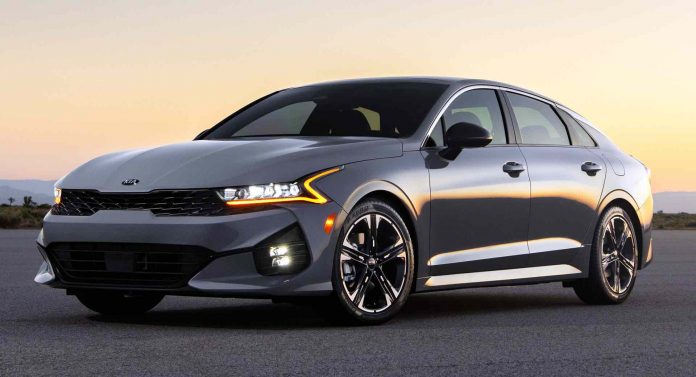 Other car companies – notably, Ford and GM – have all-but-given up on cars, cancelling most of them in favor of a lineup of almost-all SUVs and crossovers. Even the Toyota Camry and Honda Accord -for decades hot-sellers – aren’t selling as well as they used to.

That took some guts.

Its success – or not – will be an interesting way to test whether the reason GM and Ford dropped their sedans (and why the Camry and Accord aren’t doing well) has to do with lack of interest in these sedans.

Or lack of interest in sedans – generally.

Though it sounds like the name of the latest Russian submarine – possibly the star of the sequel to The Hunt for Red October – the K5 is Kia’s newest and largest sedan. It replaces the Optima – and in more than just name.

It is a larger, roomier and closer-to-being-a-luxury car that’s also available with a much more powerful engine.

But for not much more money. 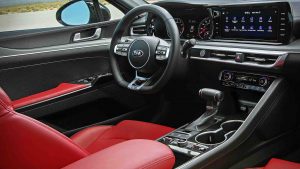 Which you can get for less in a new K5. 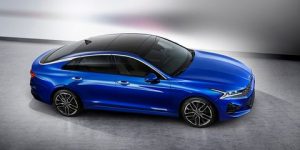 That might just pique some interest in this sedan.

The K5 is a brand-new model for Kia.

Though trunk is large for a sedan (16 cubic feet) it’s still a small space compared with what a same-sized crossover can carry in its cargo space.

Like the outgoing Optima, the K5 is available with either of two four cylinder engines.

Unlike the outgoing Optima, the K5’s standard engine is smaller – 1.6 liters vs. 2.4 liters – but turbocharged to make up for it.

The result of that is an uptick in fuel efficiency from 25 city, 35 highway previously to 27 city, 37 highway in the K5.

This dips – slightly – to 26 city, 34 highway with the optionally available all-wheel-drive system, which wasn’t offered in the Optima and is only available in a few other cars in this class, such as the Toyota Camry.

Other cross-shops like the Honda Accord are still front-drive-only. 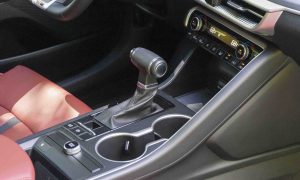 The Optima’s optional 1.6 liter engine was the same size as the K5’s standard engine, but it did have a turbo to make up for it – and made 245 horsepower. But the K5 GT’s 2.5 liter engine is larger- and more than makes up for it, pumping out 290 horsepower – making it one of the strongest engines available in this class. Only the Toyota Camry’s optional 3.5 liter V6 (301 horsepower) is stronger.

But not by much.

It is however, much more expensive.

Toyota only offers the V6 as an option in XLE and higher trims, with the least expensive version of the V6-powered Camry stickering for $34,995 – which is $4,505 more than Kia charges for the K5 GT with almost as much horsepower. 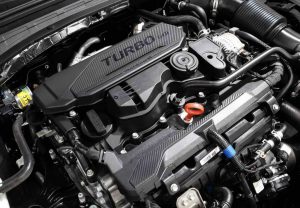 That might also generate some interest in this sedan.

It’s laudable that Toyota still offers a V6 at all; many – including Honda – have dropped the V6 option they used to offer. But when you have to pay almost $35k to get that V6, it becomes harder to get it. Also harder to justify getting it when you can get a turbo’d four that’s almost as powerful for almost $5k less, as here.

But you can’t get it with AWD – which is somewhat unusual in that it is usually the case that when AWD is offered, it’s offered with (or included with) the most powerful engine – because the more power under the hood, the easier it is for the tires to slip when only two wheels have grip.

On the other hand, it is sometimes more fun when the tires slip  . . . when you want them to. 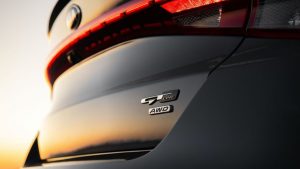 The 2.5 liter engine is also paired with a different transmission, a quicker-shifting eight-speed dual clutch automatic. Kia says 0-60 in 5.8 seconds – another improvement vs. last year’s Optima SX, which needed about 6.5 seconds to make the same run.

It’s still not as quick as the class-quickest Camry V6, however. That one nips at the heels of Camaros and Mustangs with its 5 second 0-60 capability.

But it walks away from the quickest version of the Honda Accord, which is about as quick (with its optional 2.0 liter, 252 horsepower turbocharged engine) as last year’s Optima SX. 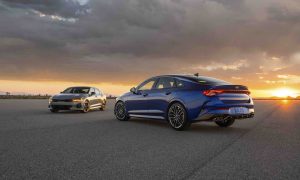 The K5 is a bigger – longer and wider – car than its Optima predecessor. And feels it.

The feeling is good.

An increase in the car’s width by an inch, wheelbase by almost two inches and overall length by more than two inches helps this Kia feel a lot like something with a more expensive badge on its skin. This is the secret the luxury-sport brands are trying to keep a lid on. If you went just by by the numbers and compared the K5 GT’s stats – and price – to say a BMW 5 Series – you might begin to wonder about the almost $25,000 difference in base price between the two.

For pushing $55k, BMW will sell you a sedan with a 248 horsepower 2.0 liter four, without a dual-clutch automatic. It is, of course, rear-drive while the Kia is front-wheel-drive.

But is it worth the almost $25k additional? 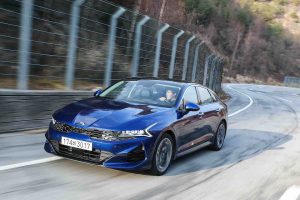 Drive the two back to back and find out.

Luxury-sport sedans like the BMW 5 and others of its pedigree  – and price – used to be obviously superior to cars in the K5’s (and Camry’s and Accord’s) class. But over the past 20 years, cars in the mid-priced/family sedan class have almost caught up to cars in the much-more-expensive classes in almost every way except what they cost and that they’re not rear-wheel-drive. Which is also not that much of a difference anymore because of electronic traction assists that have all-but-eliminated the front-drive torque steer issue as well as the proliferation of AWD as a feature in cars in the mid-priced class, which negates the RWD/FWD distinction.

The high-priced cars have also lost the thing that used to give them distinction: Their V6 and larger engines, which used to be standard equipment in cars with $50k-plus MSRPs. Now, most of them come standard with fours that are smaller- and make less power – than the fours that you can buy in cars like the K5 GT. 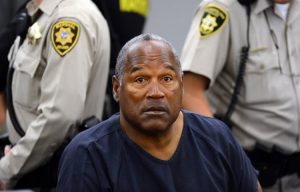 As OJ used to say, look out!

It’s not all about the engine, either.

Just as what are still styled “entry level” cars in 2021 are as quiet and refined and better put-together than the luxury cars of the ‘90s, so also mid-priced cars like the K5 have become almost indistinguishable from cars that cost nearly twice as much, insofar as how plush and comfortable and just nice they feel.

The closing of the gap is evident everywhere – and not just in terms of panel fitment. The K5 offers a 10.25 inch, split-function LCD touchscreen – inconceivable in a $30k car 20 years ago. LED headlights. A full-length panorama sunroof. Multi-stage heated and cooled seats.

That is a lot of car – for about half as much as some other cars.

Crossovers may have cargo room in their favor. So do container ships. If you’d rather something that looks less like a container ship, have a look at this thing.

It does not look like everything else – given practically everything else is a crossover or an SUV and it’s becoming hard to tell them apart without having a look at the badge.

This one has more style in its zig-zag parking lights than most of them have all over. No angry Samurai or catfish face, either. 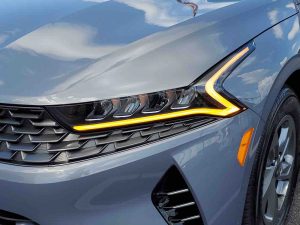 And it does have room – for the driver and front seat passenger. An astounding 46.1 inches of legroom, which for reference is nearly half a foot (5 inches) more than the legroom up front in a six-figure BMW 7 series sedan.

Also up front is an array of technology that you used to have to pay six figures to get, including the available 10.3 inch touchscreen (an eight-inch screen is standard) as well as a T-shaped gear selector that feels good in your hand.

Maybe it can’t carry a refrigerator home from Lowes.

But how does it make you feel? 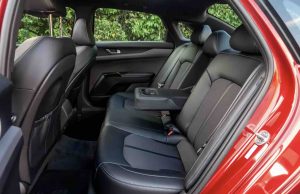 The K5’s back seats aren’t nearly as spacious as the fronts – by almost a foot – but, that’s largely on paper. Because unless you slide the front seats all the way back to their maxim extension – and 46.1 inches of legroom – you’ll have more than-the-advertised 35.2 inches of backseat legroom.

If you want the looks of the top-of-the-line GT but don’t feel the need for the GT’s 290 horsepower engine, you can get everything but in the GT-Line, which also includes extra USB ports for the back seat occupants in addition to the GT’s flat-bottomed/leather-wrapped steering wheel and upgraded 18 inch wheels with Pirelli P Zero high-performance tires.

Also available – a 12 speaker Bose Centerpoint audio system and “natural language” voice recognition control that responds to verbal commands such as “turn on the AC” and “heat the steering wheel.” 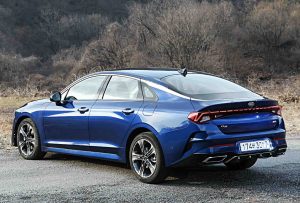 There’s even a “Sound of Nature” function that permeates the cabin with your choice of six “calming themes.”

Kia says its goal was to give this new sedan everything – as opposed to giving up on sedans.

If this sedan doesn’t sell, we’ll know it’s probably time to give up on sedans.