John asks: Was the very last issue of High Performance Pontiac magazine October 2014? Or were there a November & December 2014 issues to close out the 2014 year? I recently retired and now have time to compile and organize all my HPP magazines going back to when it was Thunder Am! My HPP collection stops at the October 2014 issue. I appreciate you taking the time to respond.

My reply: As a Pontiac enthusiast/owner, I was sad to  see HPP fade away – in October of 2014. But I was not surprised. The magazine – which I wrote a few articles for, incidentally – had two things going against it.

The first being the passage of time. 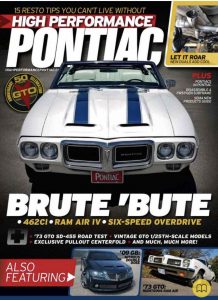 It was a magazine about cars made by a division of GM that stopped making cars altogether in 2009 and, arguably, had stopped making Pontiacs a long time before that.  The last real Trans-Am, for instance, was made in 1981 – after which the Firebird (and Trans-Am) became re-skinned Camaros, mechanically identical and powered by Chevy engines. I don’t dislike the third (and fourth) generation Firebirds; they’re by no means bad cars. But without anything more “Pontiac” about them then the badge and some styling differences, what’s the point?

The last real Pontiacs were the Fiero – powered by the Pontiac-made Iron Duke four – and the Grand Prix, which was still available with the Pontiac-built 301 – but they only lingered for a few years longer and by the ’90s, Pontiac wasn’t building Pontiacs; it was reselling Chevys.

Thus, little to write about that wasn’t old – and little fresh blood reinvigorating the old – guys like you and I who grew up admiring real Pontiacs like GTOs and Catalina 2-plus-2s and even Fieros. It’s mostly the youth that bought magazines – before the Internet killed magazine. And the youth – Millennials and younger – mostly don’t even know there was such as thing as a “Pontiac.”

And they’re not buying print magazines, regardless.

Which is a shame, but it is reality.

However, there’s perhaps some good news for us original gangster types. Apparently, there is an effort afoot to launch a new Pontiac-focused publication called Poncho Perfection; you may be interested in this article about developments. I’m not sure whether it’s gotten any traction, but it is a sign of hope.

I think Pontiac enthusiasm will not die out. It just will not be a mainstream interest – in the same way that interest in steam locomotives isn’t. But there will still be get-togethers and other expressions of interest for those of us who remember – and those of us who appreciate – the styling and innovation and uniqueness that Pontiac once stood for.