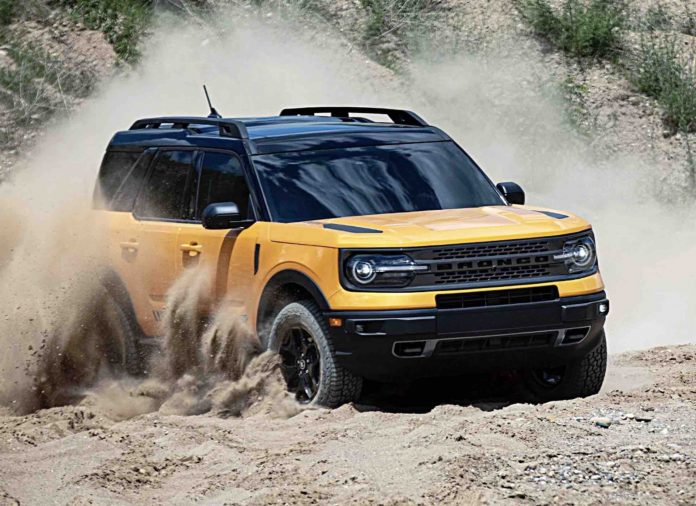 The resurrected Ford Bronco gets all the press. But there’s another Bronco that may warrant your attention, if you’d like something a bit less aggressive – and significantly less expensive.

The Bronco Sport is not a “sporty” version of Ford’s resurrected 4×4 icon. It is a modified version of the Ford Escape, styled to emulate the look of the new Bronco and with more off-road capability than the Escape, Ford’s popular compact crossover SUV. 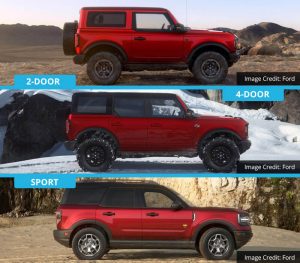 Unlike the Escape, the Bronco Sport comes standard with a full-time all-wheel-drive system (Ford styles this “4WD” but it does not have the two-speed transfer case that traditionally defined “4WD” – and which the hunkier Bronco does have) vs. the Escape’s standard front-wheel-drive (a light-duty AWD system is optional in the Escape).

There’s even a roof-mounted tent system and available rear floodlights.

Also like the Escape it’s based upon, Bronco Sport comes only with four doors (and a hard top) while the Bronco is available in both two and four door versions, with a removable top and a swing-out tailgate rather than a swing-up liftgate.

Prices start at $26,660 for the base trim, which comes with the Escape’s 1.8 liter, three cylinder engine, an eight speed automatic transmission and the “4WD” all-wheel-drive system. A gear reduction feature is standard and works like a two-speed transfer case and 4WD low range gearing, without the two-speed transfer case.

A Badlands trim gets the Escape’s optional 2.0 liter four cylinder engine, an electronic  “locking” feature for the rear differential that ups the off-roading leverage, a digital main gauge cluster and a household-type three-prong 115v power outlet. 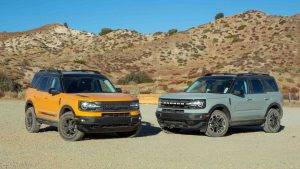 For cross-shopping comparison purposes, the base trim two-door Bronco stickers for $28,500 and tops out at $56,195 for the Badlands First Edition of that model.

But it does come with a two-speed transfer case, a 330 horsepower 2.7 liter V6 engine and you can get it with 35-inch M/S tires.

Both versions of the Bronco are new-for-2021 models – built to compete less with the profusion of light-duty crossover SUVs that already crowd the market but rather the handful of more capable four-by-four models sold by brands like Jeep and even Land Rover. 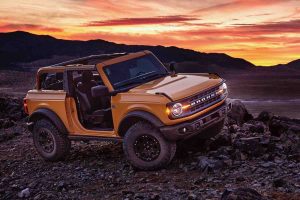 A more capable Escape – for less than the cost of a Bronco.

No option to go two-door or four-door (or topless). 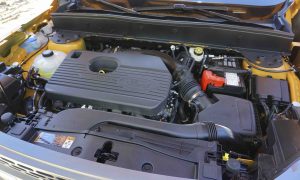 The big difference between the Bronco Sport and the Escape is the rest of the drivetrain.

Escapes come standard with front-wheel-drive; a light-duty all-wheel-drive system is available as an option. This system can route power rearward, when the front wheels lose traction  but like most such systems, is heavily biased toward the front wheels, which usually receive almost all of the engine’s power.

The Bronco Sport comes standard with a much-more-capable all-wheel-drive system that features an 18:1 gear reduction ratio that provides crawl leverage similar to a four-wheel-drive system’s two-speed transfer case and Low range gearing, but without the transfer case – which saves weight as well as expense. It’s not as heavy-duty or as mechanically aggressive as a 4WD system with a two-speed transfer case – as is standard in the Bronco, which offers a 94.8:1 crawl ratio  – but it is much more capable than the light-duty AWD system found in the Escape and other crossover SUVs not meant to venture seriously off-road. 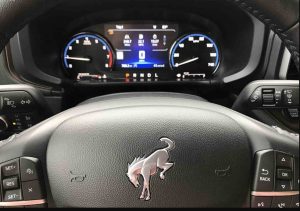 Jeep offers something similar to the Bronco Sport’s set-up in models like the Cherokee – a vehicle Ford hopes to snatch some sales from. But the Ford’s system one-ups the Jeep’s, which also has a gear-reduction feature (using its transmission) but does not have the ability to route nearly 100 percent of the power sent to the rear wheels to either rear wheel. This combines with an electronic axle locking feature, to endow this Escape-based SUV with what ford styles GOAT capability.

As in, go over any terrain.

All trims come standard with multiple driver-selectable modes – including Mud/Ruts and Rock Crawl if you get the Badlands/First Edition. 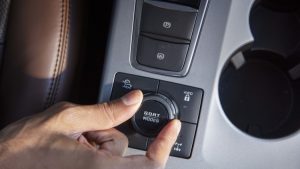 Ground clearance varies  depending on which trim you get. The base, Big Bend and Outer Banks versions have 7.8 inches of clearance; if you get the more aggressive Badlands or First Edition, this kicks up to 8.8 inches.

This is less than the 11.6 inches available in the Bronco – which targets Jeeps like the Wrangler Rubicon – but it’s much more than is generally available in light-duty crossovers, even those with a well-earned reputation for being great snow-day/bad road vehicles like the Subaru Outback – which is not available with the additional capability provided by the Ford’s gear-reduction feature or the underbody skid plates that protect the softer parts – such as floorpans – from being dented by rocks and such. 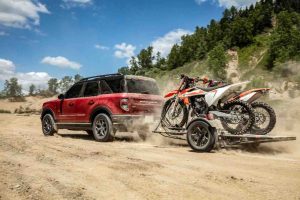 Another area of difference between the Bronco Sport and the Bronco is towing capacity. In this category, the Bronco Sport’s lighter-duty/car-based underpinnings reveal themselves in a comparatively modest 2,000 pound standard tow rating, maxing out at just 2,200 pounds for the Badlands and First Editions with the larger engine. The more ruggedly constructed Bronco can pull about 1,000 pounds more.

Still, it’s enough to pull a small trailer and a pair of dirt bikes.

Being able to drive a little farther off road, go a little deeper into the mud – or get to home from work when it’s really snowing and the plows can’t keep up – without having to drive a jacked-up, twitchy-handling  4×4 that burns through tires almost as quickly as it burns gas is the mission of the Bronco Sport. 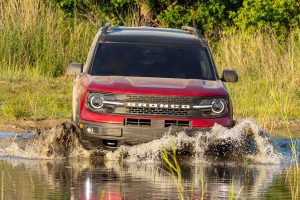 The Bronco – with its Spicer front and rear differentials, 17-inch beadlock’d 35-inch-off-road knobbies and decoupling front swaybar –  will go anywhere it’s possible for a four-wheeled vehicle to go. But that kind of capability comes at the cost of things like on-road handling, wind and tire noise and (inevitably) more rapid wearing of the more aggressive M/S-rated knobbies you need to go anywhere . There is also the cost of fuel, which goes up with wind resistance (which increases with ground clearance) as well as weight (from the transfer case and solid rear axle the Bronco’s got).

This is not a critique of the Bronco. Just a reality check. A Browning Automatic Rifle (BAR) is just the ticket for clearing a field of enemy troops but it’s hard to carry it in a hip holster. The Bronco is the right tool for people who spend their weekends rock crawling and who probably have something else for going to work on Monday. 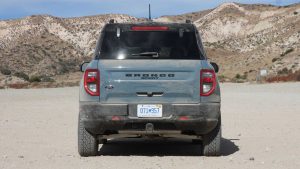 If you’ve driven an Escape, then you already know what it is like to drive one. Just a little higher up and a lot more capable, should the need arise. It is like a Sig .45 in your hip holster. Most of the time, you won’t need it – and when you don’t need it, it doesn’t make an issue of itself.

But it’s great to have it when you do need it.

Unlike the Bronco, the Bronco Sport has an independent suspension front and rear, which is lighter duty but much better at absorbing potholes without transmitting the shock to the passenger cabin. Wind and tire noise at highway speeds are not noticeably different than the wind and tire noise you hear inside an Escape at highway speeds – and that means not much of either. 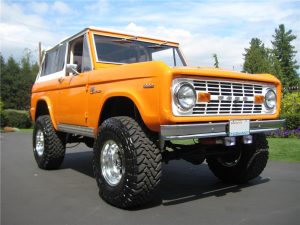 While the Bronco may be able to crawl rocks, it does not carve corners – which is asking the unreasonable. Corvettes aren’t much use in the snow, either. The Bronco Sport doesn’t make you slow to a crawl when a corner looms. It does not feel top heavy or tipsy if you enter one at speed.

And it gets about the same gas mileage as the Escape, which rates 23 city, 31 highway with its optional 2.0 liter turbocharged four cylinder engine and AWD. In contrast, the Bronco – with its standard 2.3 liter turbocharged four cylinder engine – sucks it down at the rate of 20 city, 21 highway. Not the yuge drop in highway mileage; see that business about wind resistance/drag and weight.

With its optional turbocharged 2.7 liter V6, the Bronco emulates the appetite of the classic and V8-powered Broncos of antiquity, posting a Great Thundberg-triggering 17 city, 19 highway. 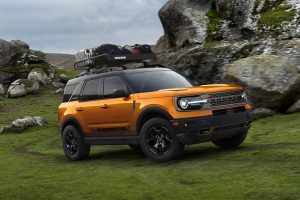 Don’t forget what it costs to replace those 35-inch Goodyear Territory knobbies once every two years (or sooner) either.

The Bronco Sport’s body comes just one way, as opposed to the two ways the Bronco’s comes. Technically, four ways – since in addition to being available in both two and four-door configurations, the Bronco also comes with hard and soft tops.

With the Sport you get four doors, standard. And a hardtop, only. But Ford has gone to great lengths to impart visual separation between the Bronco Sport and its Escape antecedent. The visuals are so different, in fact, it is difficult to tell by looking that the two are so closely related. 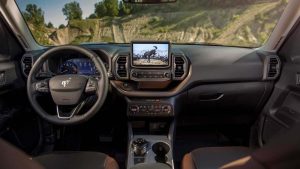 It is squared-off where its brother from the same mother is rounded-off, with a much more upright windshield, taller-looking side glass and an Expedition-looking side profile. These angularities extend to the interior, which is vaguely similar to the Escape’s but brickier-bulkier-looking, down the vertical-stack (vs. horizontal and slimmer-line) air vents and the thicker/wider center console. Even the knobs to control/adjust the AC system are bigger – and so easier to grip when gloved. They are also silicone sealed, to protect against water intrusion. Badlands and First Edition trims come with rubber/hose-off flooring. All trims get an underseat storage area that’s watertight. 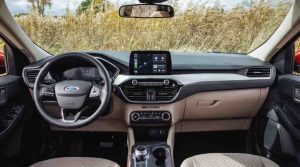 A larger, also-more-squared-off 8-inch LCD touchscreen tops the center stack – with a bucking Bronco image that displays when it’s booted up. 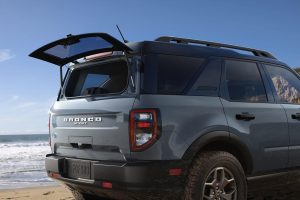 Both have more cargo space in these two categories than the two-door Bronco – which only has 22.3 cubic feet of space behind its third row and 52.3 cubic feet with them folded. However, the four door version has a total of 82.3 cubic feet of cargo capacity.

The Bronco also has a fold-out tailgate, while the Bronco Sport has the more common fold-up liftgate. But it differs from the Escape’s in being two-piece. There is an upper glass section that can be opened independently of the liftgate, itself.

Like the Bronco, the Sport is very customizable – very much unlike the Escape. Ford offers 100 different ways to make the Sport your Sport, including via Yakima bike racks for the roof and a tent that sits on the roof – with a ladder to access it. Also available: a slide-out work table, five-way-configurable Cargo Management System and a 400 watt inverter, along with liftgate-mounted floodlamps to light up your campground. 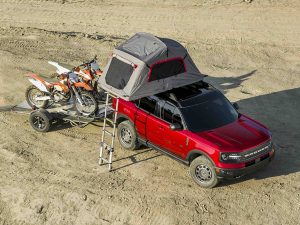 Unfortunately, if you are not a fan of being “assisted” when you’re driving, the Sport also comes standard with the whole enchilada of electronica, including (deep breath) Pre-Collision Assist with Automatic Emergency Braking, Pedestrian Detection, Forward Collision Warning and Dynamic Brake Support, Blind Spot Information System with Cross Traffic Alert and Lane Keeping System.

If that’s not enough “assistance,” you can add Co-Pilot360+ which bundles Lane Centering, Evasive Steering Assist and Speed Sign Recognition.

it’s a shame that drivers who don’t feel the need of such “assistance” can’t just say No, thanks to all of it.

The Bronco Sport should give the Jeep Compass and Subaru Outback a run for the money – and for less money (with fewer compromises) than the more single-minded regular Bronco.