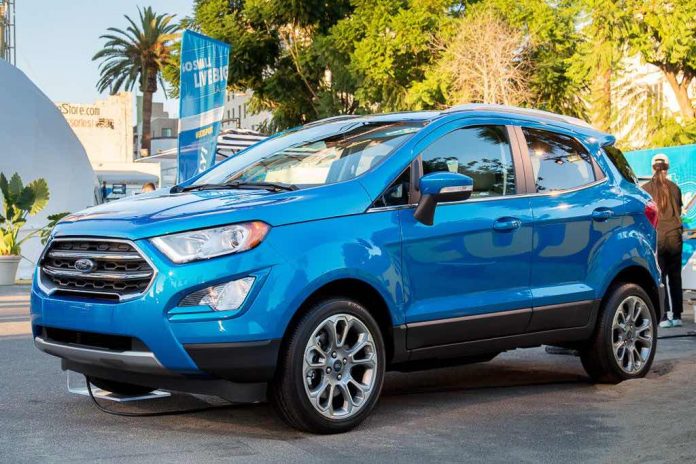 Really small SUVs aren’t a new idea. You may remember old school examples like the Geo (later Chevy) Tracker of the ’90s, as a for-instance.

But the idea’s making a comeback.

And it’s not a bad idea  . . . if you’re looking for SUV capabilities (and capacities) in something with a footprint that’s about the same size as a subcompact sedan’s. 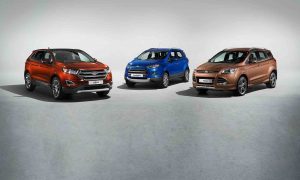 The Eco Sport is Ford’s newest – and smallest – crossover SUV.

It’s about a foot-and-a-half shorter overall than the Escape, formerly Ford’s smallest SUV – so it can fit into tight curbside parking spots the Escape, larger SUVs – and most cars – have to pass up.

But it isn’t tight inside.

There’s several inches more backseat legroom in this mini-me SUV than in most same-length subcompact sedans – and about three times the cargo capacity. 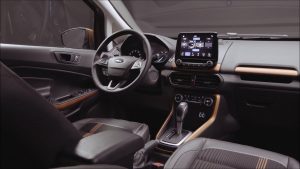 It also has more ground clearance  – almost eight inches – than other mini-me SUVs and it’s the only mini-me SUV with a swing-out (rather than swing up) rear door.

Base price is $19,995 for the front-wheel-drive S trim equipped with a turbocharged three cylinder engine paired with a six-speed automatic. A larger 2.0 liter four cylinder engine (no turbo) is available optionally – and with or without all-wheel-drive.

A top-of-the line Titanium trim equipped with the 2.0 liter engine and AWD stickers for $27,330. 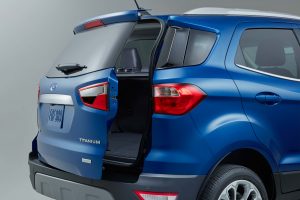 The Eco Sport has been available in Europe for several years but it’s a new model for the U.S. market.

Ford brought it over to counter the growing ranks of similar models from Honda (HR-V), Mazda (CX-3), Chevy (Trax) and – most recently – the just-launched Toyota C-HR.

About 7 inches shorter overall than Honda HR-V and Mazda CX-3 – so it fits in even tighter spots.

The extra almost two inches of ground clearance gives it a snow-day edge over lower-to-the-ground competitors. 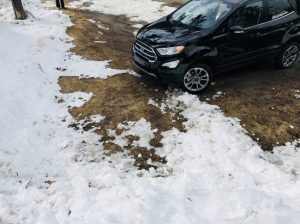 Heavier than others in this class, which hurts both Eco and Sport.

The sticker says 27 city, 29 highway – as opposed to 29 city, 34 highway for the larger-engined (2.0 liters) Mazda CX-3 with FWD and 27 city, 31 highway for the similarly better-endowed 1.8 liter-equipped Honda HR-V with all-wheel-drive. 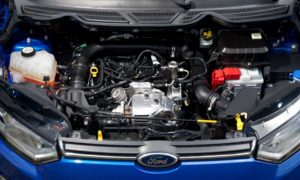 The Honda weighs about the same – 3,094 lbs. – but it has almost twice the engine, in terms of physical displacement.

The Ford can increase its functional displacement on demand – via the turbo that’s bolted to its exhaust manifold. It boosts the output of the little three to almost four – 123 hp (the Honda’s larger 1.8 liter engine makes 141 hp; the Mazda’s 2.0 liter engine makes 146).

But there’s the rub.

Off the boost, the 1 liter engine doesn’t make enough power to haul the 3,000-plus pound FWD Eco Sport. So it’s on boost pretty much whenever the Eco Sport is moving  . . . in order to get it moving. But that eats gas – which defeats the purpose of having the smaller engine. 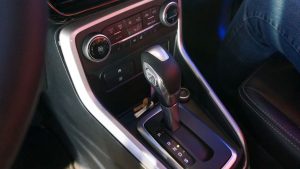 The 1.0-equipped Eco Sport is more economical in stop-and-go city driving than the Eco Sport equipped with the optional 2.0 liter four cylinder engine. Both rate the same 29 MPG on the highway – but the smaller-engined version’s city mileage (27 MG) is four MPG better than the bigger-engined version’s (23 MPG).

But, you can’t get the 1.0 liter engine with AWD – because adding roughly 200 pounds to the Eco Sport’s curb weight would have that little engine working hard (on boost) pretty much all the time.

Chevy splits the difference with a 1.4 liter four cylinder engine that’s not too small – with a turbocharger to make it just a little bigger when needed. It makes 138 hp – enough to handle the optional AWD system and still manage 25 city, 33 highway for the FWD version. 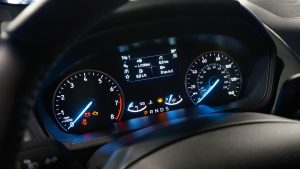 If you want an AWD Eco Sport, you’ll be upgrading to the optional 2.0 liter four cylinder engine. It has the gumption – 166 hp – to handle the additional couple hundred pounds the AWD system adds.

Or, skip the AWD and get to 60 a little sooner.

And the bigger engine makes its power without a turbo – which is arguably long-haul/post-warranty preferable. Turbocharged engines can be built tough, to handle the boost – but no matter how well-built, they have more parts (the turbo, of course – plus the peripherals and plumbing) and that means the potential, at least, for more things to go wrong eventually. 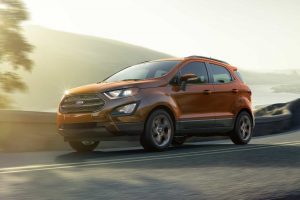 Those odds going up as the miles go by.

The Ford also uses a pretty conventional six-speed automatic – with both engines. It’s not “the latest thing” – but that, too, is arguably a good thing. If you are planning on keeping this thing for a long time. 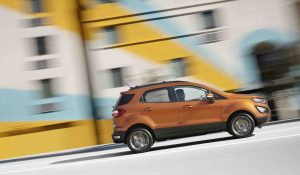 The Eco Sport isn’t the quickest in this class  – it takes about 10 seconds to mosey to 60 MPH, even with its strongest-in-class (on paper) 2.0 liter engine – vs. 8-9 seconds in lighter rivals like the HR-V and CX-3.

But it is the most adverse weather capable – chiefly because of its higher ground clearance.

In heavy snow, that matters at least as much as whether you’ve got AWD – because once  your car rides up on top of the snow, you’re stuck.

This mini-me SUV also has a very tight turning circle – 17.5 feet – which is about two feet tighter than an Escape’s. That makes it easy to U turn on narrow streets in a single fluid motion – no having to stop, reverse and reposition.

But the real surprise is how stable it feels given how short and tall it is.

What killed off the the original crop of mini-me SUVs like the Geo Tracker was their top-heavy handling and tendency to end up on their tops after being unsettled by an abrupt jerk of the steering wheel – as when trying to avoid an animal or kid that unexpectedly appeared in the road.

No such issues here. 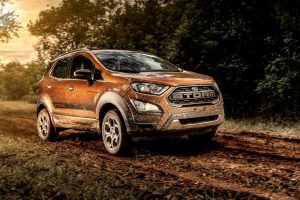 Despite its very short 99.2 inch wheelbase – only slightly longer than a ’95 Chevy Tracker’s 97.6 inch wheelbase. And despite being almost exactly the same height – 65 inches for the Eco Sport vs. 65.7 for the ’90s-era mini-me SUV. Part of the reason for the difference is the Eco Sport’ strut-type four-wheel-independent suspension vs. the old-school mini-me’s less-forgiving coil spring set-up.

And, of course, stability control wasn’t on the roster back in ’95. It’s standard equipment now.

The only issue the Eco Sport does have is a jouncy-bouncy ride, the almost-inevitable result of that 99.2 inch wheelbase plus all that weight.

What goes up must come down.

To get a sense of how short that is, a subcompact sedan like the 2018 Hyundai Accent is almost a foot longer overall (172.6 inches). 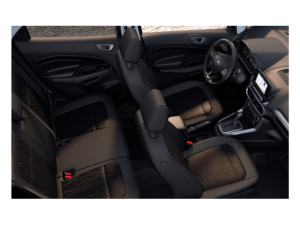 That’s more cargo space than the Chevy Trax (18.7 cubic feet behind its back seats and 48.4 inches with the second row folded) and 5 inches more backseat legroom than the Toyota C-HR (31.7 inches – that’s tight!)

The Honda HR-V has the most interior and cargo space of them all – including 39.3 inches of second row legroom – comparable to the legroom in some full-sized cars -and 23.2 cubic feet of cargo space behind the second row.

With the second row down, the HR-V’s cargo capacity increases to a class-best 58.8 cubic feet.

The Mazda CX3, on the other end of the scale, has the least cargo space of them all – just 12.4 cubic feet with the second row up. That’s less cargo space than a Hyundai Accent subcompact sedan (13.7 cubic feet). 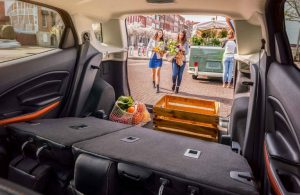 There’s one thing the Ford’s got that none of the others do – a swing-out cargo door. If you’re tall, your won’t bump your head against the door. And if you’re not tall, reaching the door handle (to open and close the door) is easier than it is with a traditional swing-up liftgate.

On the downside, the swing-out door can be harder to open if you’re jammed into a tight parking spot.

The up-swinging liftgate makes use of vertical space.

Regardless, having a big door makes the available space more accessible. You can stuff long/stuff into one of these things – and then close the door. You can’t stuff nearly as much stuff in a car’s trunk – and even if you get it part of the way in there, it’s going to be hanging in the breeze. 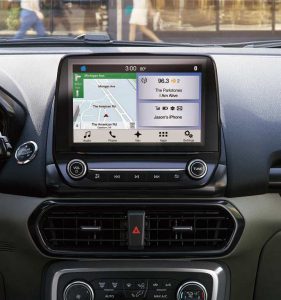 Another nice touch is the cargo area’s configurable shelving – and the hidden storage area underneath the shelving.

You can get this mini-me SUV with almost everything imaginable – including an outstanding 10-speaker Bang & Olufsen ultra-premium audio system. All trims get an LCD touchscreen – ranging in size from 4.2 inches in the base S trim to 6.5 inches in the mid-trim SE – with an 8 inch unit available optionally.

You can also get an external keypad entry system – a uniquely Ford (and Lincoln) feature you won’t find anywhere else. It’s a nice fail-safe in the event you lock yourself out or just can’t find your keys. 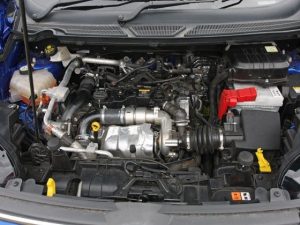 A windshield wiper de-icer and ambient interior lighting are also available. All trims come standard with two USB ports (located ahead of the shifter) and – on SE and higher trims – a 110V household style power point.

The one thing you can’t get is the turbodiesel engine Ford offers in European-spec version of this vehicle.

That’s too bad, because the euro-spec diesel is capable of averaging 10 MPG better than either of the U.S.-spec Eco Sport’s gas engines.

That would be a lot more Eco. 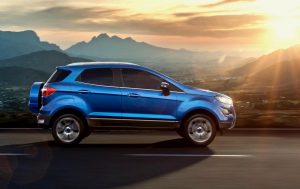 But Ford – like other automakers – is reluctant to bring a diesel engine to the U.S. in the wake of the VW diesel debacle.

Hopefully, when the smoke clears, that will change.

PS: EPautos magnets are free to those who send in $20 or more. Also, my latest eBook is also available for your favorite price – free! Click here.