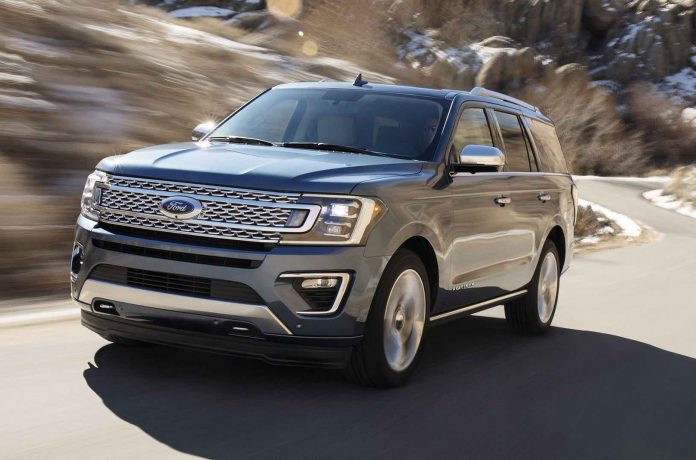 The Ford Expedition is bigger – and roomier – than a Chevy Tahoe. But it’s not as yuge as a Suburban.

It’s also unusual in another way. In two other ways. 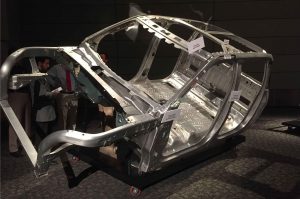 First, it’s wrapped in aluminum. All the other SUVs it wrassles with – the Tahoe/Suburban, Toyota Sequoia and Nissan Armada – are made of steel.

This has its pros – and its cons.

Likewise what’s under the Ford’s hood.

But it is more powerful than all of the V8s which come standard in the others.

This in spite of being only 3.5 liters in size.

The Expedition is a full (and fuller) size, three-row SUV.

The regular wheelbase version is slightly smaller overall than a Chevy Tahoe – but bigger (roomier) on the inside. 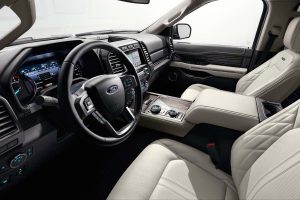 The long-wheelbase Expedition Max is even roomier – but not quite as big as a Chevy Suburban on the outside.

Either way, it has three rows and seats 7-8 people, depending on the configuration.

Unlike all the large SUVs it tangles with, the Ford does not even offer V8 power … just a lot of power.

Which is why the Expedition has a class-best 9,300 lb. max tow rating.

A top-of-the-line long-wheelbase Platinum trim with 4WD stickers for $78,865.

A new ten-speed automatic transmission is standard equipment – replacing the six-speed automatic used last year – and all trims get a revised instrument panel. In-vehicle 4G Wi-Fi that can support as many as ten different devices and stream movies is available.

So are massaging seats. 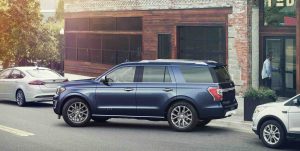 Not as parking spot unfriendly (even the Max long-wheelbase version) as the super-sized Suburban.

Aluminum body cuts weight but will cost you more (vs. steel) if dented. 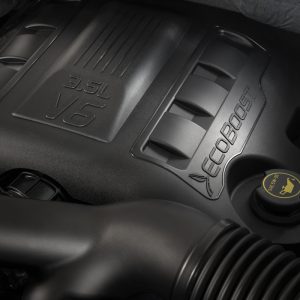 There really isn’t any replacement for displacement.

The 3.5 liter V6 that is the Expedition’s standard powerplant may appear at first glance to be less than a V8 – and it is – if you’re counting cylinders.

But the capacity of those cylinders can be increased at will via the downward movement of your right foot. This action results in boost pressure from the pair of turbochargers bolted to the V6. These compress and shove more air into the cylinders than would otherwise fill them during the intake stroke.

This effectively increases the displacement of the engine – displacement being a measure of cylinder capacity.

V8s – all else being equal – make more power than V6s because they flow more air.

Turbocharging can equalize that. 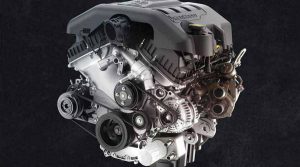 Torque is another way of measuring displacement – bigger engines almost always make more of it than smaller engines. The Ford makes more because it is bigger – when it’s on boost – than the V8s in rival SUVs. 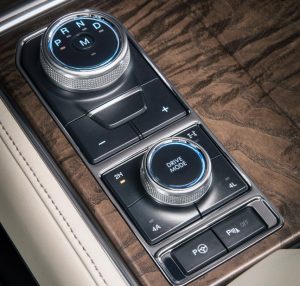 The Chevy (unlike the Nissan and the Toyota) does offer an upgrade – the optional 6.2 liter V8. It makes 420 hp and 460 ft.-lbs. of torque – a bit more hp than the Platinum trim Ford, but still not as much torque.

Which explains another number – the Expedition’s class-best max tow rating of 9,300 lbs.

It is what gets thousands of pounds rolling. The bigger – and heavier – a thing is, the more torque you want on hand.

Because the Chevy has less torque, its max tow rating is lower: 8,400 lbs.

It also has less leverage.

The Tahoe’s 5.3 liter V8 is paired with a six-sped automatic while the Ford’s V6 is teamed up with a new ten-speed automatic. This transmission is – interestingly – the product of a joint Ford/GM engineering effort and can also be found in the Tahoe – but only if you buy the optional 6.2 V8. 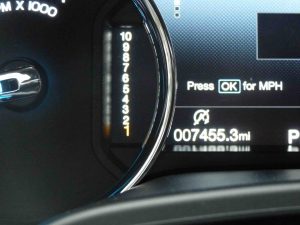 The idea behind the ten speed is to tighten up gear spacing so the engine doesn’t have to work as hard to accelerate and will therefore use consume less gas. The top several gears are also overdrive gears, which serve the same fuel-saving purpose once you’re rolling.

But keep in mind those other numbers – horsepower and torque.

The Ford V6’s mileage may be only fractionally better than the Chevy V8’s – but it makes much more horsepower and a lot more torque. 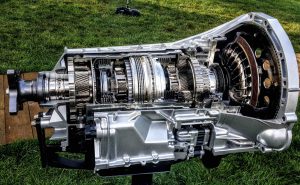 In effect, a free lunch.

Except for one thing. Well, two things.

Those turbos – and related peripherals – aren’t free. There’s a reason why the Ford costs more than its V8-powered competition. The V8s are simpler, have fewer parts – and no turbos.

And they are less stressed.

Cylinder pressure is lower in an engine that isn’t force-fed. That means less pressure on the reciprocating assembly (rods, crankshaft) and the bearings in between. Turbocharged engines can be built to handle the extra pressure – witness the long-lived turbo-diesel engines used in heavy trucks as a for-instance. They routinely go 300,000 miles in between overhauls. But is this gas turbo V6 built to handle it over the long haul?

Ford says yes, but we won’t know for sure until lots of them have been on the road for a long time. 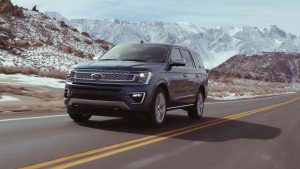 The power – and torque – produced by this V6 could easily fool you into assuming there is a V8 under the Expedition’s hood. It accelerates like a bull – and pulls like a Clydesdale. The only V8 in this class that will run with it is the Chevy with its optional 6.2 V8, which says good things about this standard equipment 3.5 liter V6.

All that’s missing is the sound. 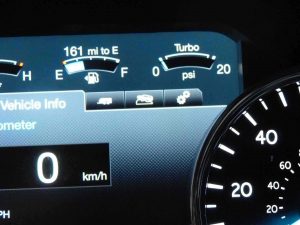 Instead, a boost gauge in the dash keeps you posted about the pounds per square inch of air (up to 20 psi) being stuffed into the six’s cylinders. There’s no whistle or wastegate pop  – which is a shame, or at least ought to be optional. But Ford engineers were probably working on the assumption that prospective buyers wanted what they were used to in a vehicle of this type.

Also, the plain fact is the Expedition – like its rivals – has become a high-dollar ride. The new buyers – who are ipso facto well-off buyers – like quiet power.

So, it is very quiet. 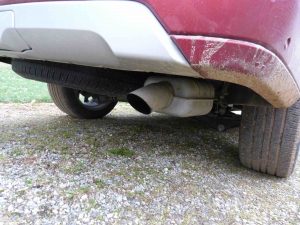 Even during balls-to-the-wall passing runs, the big Ford makes little noise. At idle, it’s imperceptibly running. The V6 has no lope – and just one (big) exhaust outlet, tucked discreetly underneath the rear bumper. This thing doesn’t make a public display of its goods.

It just delivers them. 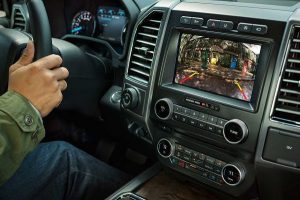 This isn’t a gimmick; the drivetrain’s personality noticeably changes to reflect the setting selected. In Sport, for instance, the ten speed automatic will hold the lower and mid-range gears longer- to keep the RPMs at the proper pitch for snappy response. The computer green lights maximum boost. In Eco, the transmission seeks out the upper gears sooner, to lower engine revs as soon as possible, in order to cut fuel consumption. Boost is dialed back; the engine becomes noticeably more mild-mannered.

The 4WD system is the real-deal, too.

It has a two-speed transfer case and 4WD Low range gearing – features which light-duty crossovers lack. (And also some used-to-be-real SUVs such as the Cadillac Escalade I reviewed last week. It’s an upmarket Tahoe, basically – but without the off-road capabilities of the Tahoe.) 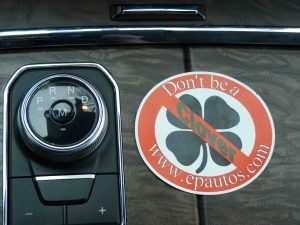 You can definitely go off-road – and snow is nothing to sweat.

If you upsize to the Suburban, you’re looking at at a Moby Dickian 224.4 inches.

The Ford splits the difference.

Room – without too much size.

Digging deeper into the room/size issue . . .

The smaller-on-the-outside Tahoe is . . . smaller on the inside. Mostly. 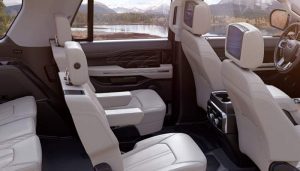 It does have driver and front seat passenger legroom ample enough for an NBA forward (45.3 inches) but the second row is more cramped (39 inches) and there’s less cargo space behind the third row (15.3 cubic feet) and with the second and third rows folded (94.7 cubic feet).

If you buy the Moby Dickian Suburban, the cargo capacity expands to 39.3 cubic feet behind the third row and to 121.7 cubic feet with the second and third row folded. But good luck finding a parking spot.

You also get more engine to go with the extra size. 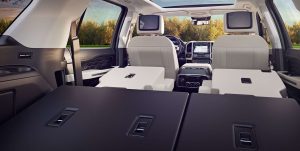 And, it weighs less than the ‘Burban.

Which brings up the body. 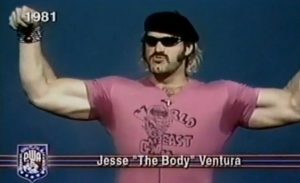 The Expedition’s aluminum skin. Ford shaved several hundred pounds off the scale by stamping most of the burly SUV’s exterior panels out of aluminum rather than much-heavier steel.

This – plus those turbos – is how Ford maintained (increased) the performance/capability of the Expedition while maintaining acceptable-to-the-government fuel economy. The downside is that if you dent those aluminum panels, they’ll cost more to fix.

This may be reflected in the cost to insure the Ford. 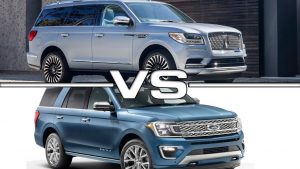 Parodying Rudolf Hess: The Expedition is a Navigator just as the Navigator is an Expedition. Just as the Tahoe is an Escalade (and vice versa).

Nominally, the Expedition is merely a Ford – while the Navigator is a Lincoln. But that doesn’t mean you can’t get things like massaging seats, sliding second row seats, deploying running boards, a 12 speaker Bang & Olufsen premium audio rig, dual rear DVD monitors and a 4G in-vehicle WiFi hot spot that can support 10 separate devices in the mere Ford.

And such amenities aren’t offered in the Tahoe. 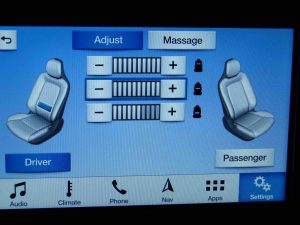 Well, not massaging seats, anyhow. And they are worth it.

Traffic is miserable; the news is depressing. Probably you are divorced – or soon will be. Massaging seats can be even better than a 26-year-old girlfriend.

They costs less, too.

The Expedition’s turbo V6 – and aluminum body – are almost certainly the leading edge of The Future for big SUVs. How else will the car industry be able to continue producing big SUVs that don’t offend government fuel economy and “carbon emissions” standards while also maintaining the power/capabilities buyers expect?

One wonders, though, how much longer this game can go on.

At some point – probably not too far off – vehicles like this will become unaffordable, even with seven year financing.