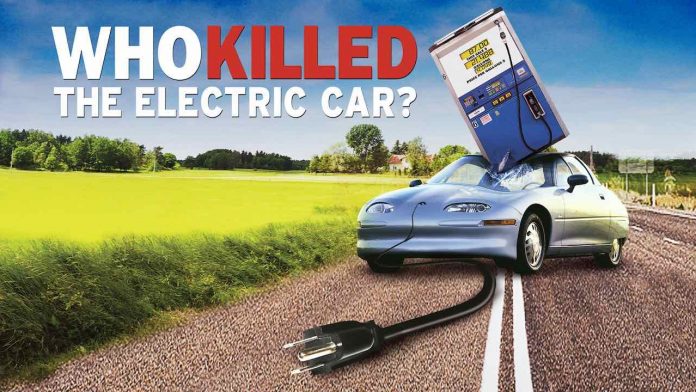 Michael Moore did a documentary about Who Killed the Electric Car? – but it was about the wrong car.

It wasn’t the EV1 – also known as the Impact – that was killed by its creator, General Motors. It died naturally, from the same genetic defects – so to speak – that afflict all electric cars to this day. It cost too much money – and it cost too much time. Few people will willingly spend more to get less – and that is what you got with the EV1. It is what you get with all currently available electric cars, which don’t go as far as any other car and take much longer to get going again. They are mobility reducers, which is disincentive enough for most people.

But when you expect them to pay extra for the “privilege” . . .

It was hardly necessary to “kill” that.

Most people simply didn’t want it – or want to pay for it. 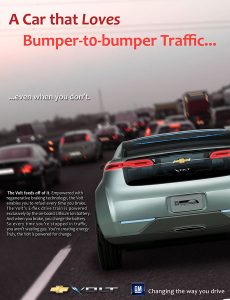 Moore should do a video about the Volt.

This was the electric car that GM did kill – via perhaps the most inept marketing campaign ever, which portrayed it as a hybrid rather than the practical electric car it was.

It was a unique ride. A true electric car, propelled by its motors that were powered by its battery pack, with a small gas engine onboard to serve as a carry-it-with-you generator, to keep the electricity flowing, rather than constantly draining.

The genius of this being the elimination of the necessity to stop for a recharge, as the car recharged itself – or could. With the ability to be plugged in when convenient. The last iteration (2019) could go about 50 miles on a charge, without any need for onboard recharging. That was sufficient to encompass most people’s daily commute, or very close to sufficient.

Yet the car could also travel hundreds of miles, too – its range extended by the onboard generator IC engine.

This is similar to the plug-in hybrids that are currently available but also very different. In all other cases, the hybrid’s gas engine serves a primary propulsive purpose – i.e., it functions as a gas (or diesel) engine does in any non-hybrid car. It propels the car, as well as generates electricity to recharge the batteries, which power the electric motors that help to propel the car. 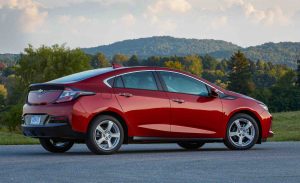 This is a very important difference – if you are “concerned” about “greenhouse gas emissions” – because it means the hybrid’s gas engine is usually running about half the time – more, if you want rapid acceleration because in a hybrid, the gas engine’s power is used to regularly supplement the available power of the motors, which would otherwise not provide sufficient power to propel the car on their own.

Now, hybrids are a good deal – a much better deal – than electric cars, if you are “concerned” about “the environment.” Their battery packs are smaller, so there’s less environmental damage done extracting and processing the necessary materials, such as lithium, graphite and cobalt. The battery packs last longer, because they are used less often and not as hard. One of the huge technical issues – yet to be overcome – with electric cars is that of the effect of regular deep discharge followed by “fast” charging cycles, which rapidly age a battery and are also an intrinsic fire hazard. 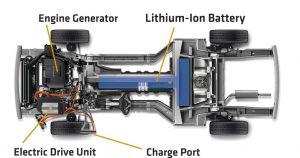 Both are non-issues with hybrids because they do not need to “fast” charge – because you never have to wait for a charge. And because the battery pack is never fully discharged. The onboard governing electronics prevent that from happening by automatically restarting the gas engine to feed electricity back into the battery pack as needed, so that it never becomes fully discharged.

But the Volt was even better than hybrids – in all respects.

Because it could travel 50 miles on electricity, entirely – about 20 miles farther than any currently available plug-in hybrid – and because its gas engine was a generator that only came on when the battery pack’s charge ran low (it was uniquely not connected to the drive wheels and did not directly propel the car, as in all other hybrids) it burned almost no gas during most drives – thereby emitting almost none. 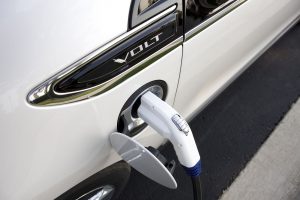 Owners will attest to the need to use fuel stabilizer because a full tank in a Volt will sometimes last for months.

This is so because the car’s 50 mile all-electric range is sufficient to encompass most people’s daily drive – or most of it. Even if  the car’s all-electric range is exceeded by say another 30-40 miles, that amounts to the burning of perhaps 1 gallon of gas – to travel a total of 75-80 miles. It takes a long time to consume the 9 gallons of gas the Volt carried in its tank at that rate.

If half the cars on the road were Volts or cars like the Volt, “greenhouse gas emissions” would plummet – and not just because of the fact that cars like the Volt hardly emit any gasses. Millions of people could afford to drive a car like the Volt, which cost about what a plug-in Prius costs (just under $34,000 in 2019).

And which did not cost them the wait.

Or a Bolt – the most affordable electric car GM currently sells ($36,500) and which GM just had to recall all of because of fire risk associated with “fast” charging – the same issue plaguing Teslas. The same issue that plagues all electric cars that have to “fast” charge to try to overcome or at least partially palliate their primary functional gimps – their short range and extended recharge times.

Those are the other costs of electric cars – which account for the need to force them onto the market and force people to accept paying more for less (as well as placing them in danger of a hideous death via spontaneous combustion).

The Volt came with no such costs. It wasn’t dangerous – to its owner or “the environment.” It was affordable and it was practical. It did not require a completely new, hugely impractical and titanically expensive network of “fast” chargers to make it viable – and which will require god-knows-how-much in the way of “environmental” costs associated with erecting this new infrastructure – and to summon the necessary generating capacity to make it work.

Which it still won’t – unless you don’t mind having to stop every 150-200 miles or less to wait for 30-45 minutes or more. And remember to avoid parking it in the garage – so as to avoid burning down your house.

If the “environmentalists” were truly motivated by “concern” over “greenhouse gas emissions” from vehicles, a car like the Volt would have been cheered – and more such encouraged. 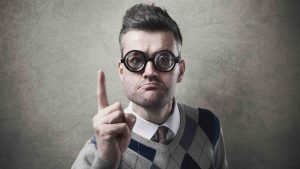 Instead, the Volt was misrepresented – and even castigated, on account of the fact of its still having a gas engine, no matter how little gas it burned or emitted. This castigation being  religious and political rather than rational. If what is wanted is a car that is  environmentally friendly without reducing mobility or decreasing affordability.

GM deserves heaps of blame for not properly explaining – or defending – the Volt. But its tarring-and-feathering by the “environmental community” speaks volumes about what this bunch is truly “concerned” about.