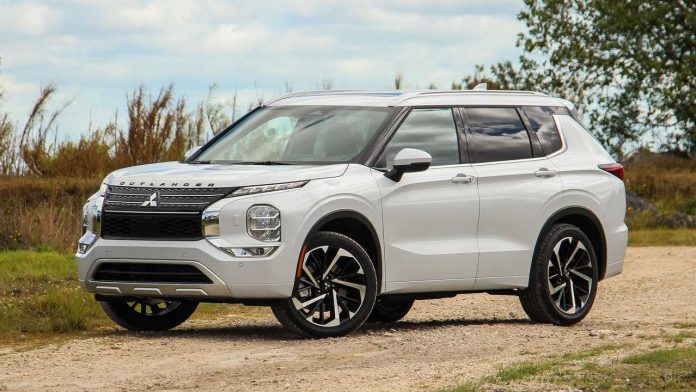 The Nissan Rogue is one of the best-selling compact crossovers on the market. It’s also sold – for less – by Mitsubishi.

The Outlander – which shares a platform and mechanicals with the Rogue – seats seven in three rows vs. five in two.

It also has a smaller price tag – and a bigger warranty.

The Outlander is Mitsubishi’s take on the Nissan Rogue, which serves as the starting point for this compact crossover. It is one of very few crossovers its size that offers seating for seven – and the only one you can get at this price.

For cross-shopping purposes, the Kia Sorento – which is about the same size and also offers a third row – stickers for $29,490 to start, with FWD. With the optional AWD system, the Kia lists for $31,790.

A Nissan Rogue – which does not offer third row seating – stickers for $26,050 to start. 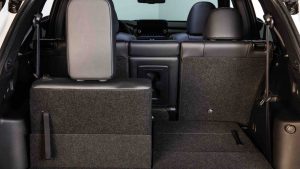 The 2022 Outlander is all new. It is based on the new-last-year (this calendar year) Nissan Rogue but has its own look as well as a different ensemble of standard and optional equipment.

The least expensive three-row crossover on the market.

A better deal – with a much better warranty – than the same thing (mechanically) sold under the Nissan label.

Tows more than its Nissan-badged sibling.

Third row is a tight squeeze for people – and squeezes out cargo room, which the Outlander has less of with its seats in place than the Rogue’s got.

Like the Rogue, there’s only one engine – and one transmission – regardless of trim. 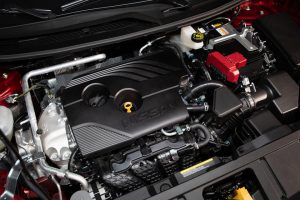 Regardless of trim, every Outlander comes standard with the same 2.5 liter, 181 horsepower four cylinder engine, paired up with the same continuously variably (CVT) automatic transmission.

It’s a larger engine the typical turbocharged 2.0 liter (or smaller) engines that are becoming common in medium-small crossovers – which need a turbo to make up for being smaller. This engine has high (12.0:1) compression, instead – which basically does the same thing (increases cylinder pressure, to make more power) but without the extra parts – and extra expense.

This could save you money down the road, since you will never have to worry about replacing the turbo (or intercooler) this crossover doesn’t come with.

It is also the same Nissan-built engine used in the Nissan-bodied Rogue – but for some reason the Mitsu-bodied version is rated as delivering only 24 MPG in city driving and 31 on the highway vs. the Rogue’s 27 city, 35 highway.

Actually, there is a reason – though it has nothing to do with the engine (or the transmission). 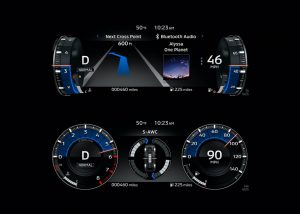 The Mitsu-bodied iteration of this crossover is 222 pounds heavier than the Nissan-bodied version (3,593 lbs. vs. 3,371 lbs.) probably because of the extra row as well as the extra couple inches of length. Also,  the Mitsu’s more stylistically interesting bodywork is blockier and so probably slightly less aerodynamic.

There is a compensatory factor – although it applies to both iterations of this crossover: The non-turbo’d engine under both of their hoods doesn’t need premium fuel to deliver its rated horsepower – as is the case with some of the tiny turbo’d engines out there. That saves you about 30 cents per gallon at each fill-up, which is kind of like getting an extra 2-3 MPG out of each gallon of gas.

There’s another interesting difference between these mechanically identical crossovers: The Mitsu-bodied version is rated to tow up to 2,000 lbs. while the same thing wearing Nissan panels carries a much lower 1,350 lb. maximum tow rating. Whether the Nissan can handle up to 2,000 lbs. isn’t the point – unless you don’t care about the coverage.

If you tow more than what the company that made your vehicle (and issued the warranty) says it can tow – and something breaks – you’ll be paying to fix it, not them. 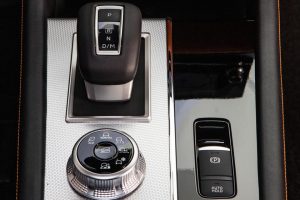 It may only be a marketing difference – if something doesn’t break.

And if it does, any Nissan store can fix it – or get parts. Some worry about buying a Mitsu because Mitsubishi has a much smaller presence than Nissan – which has stores in every town.

That’s not an issue here – because the Outlander is a Nissan, mechanically-speaking. Same parts – same service.

You do have one choice – in both cases – as regards the drivetrain: It’s offered with either front-wheel-drive (standard in most trims) or all-wheel-drive, which is optional in all trims except the top-of-the-line SEL Launch Edition, which comes with it standard. 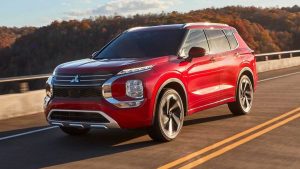 The Outlander feels bigger than it is – as Mitsubishi intended.

Though the underthings are largely the same, there are some important differences to which this can be attributed. Both the Mitsu-bodied and the Nissan-bodied versions ride on the same 106.5 inch wheelbase but the Outlander is wider than the Rogue by more than two inches (74.7 inches vs. 72.4 inches) and this sense of broad-shoulder’d-ness is accentuated by the Mitsu’s flat – and wide – hood vs. the Rogue’s more round-shoulder’d stamping.

The downside is that it’s sometimes hard to see over that flight-deck slab of a hood, particularly when negotiating a tight turn on an incline on a narrow gravel road. But – as is true with any vehicle – you develop a sense of where things are (and end) as you get used to driving the thing.

Once that is done, you may enjoy the beefy feel of this thing.

Power delivery gives a deceptive sense of the power that’s available – a thing both good and bad. What I mean by this is that the 2.5 liter engine hasn’t got a lot of power to spare but it feels much stronger than it is – at first – due to very deep (5.694) final gearing. If it weren’t for the CVT automatic’s ability to cut the effective gearing by half or more once you’re rolling, this thing would probably have a top speed around 80 MPH, like a muscle car rear-geared for the eighth mile – without an overdrive gear in its transmission.

Because it has all that leverage down low, it practically lunges forward from a dead stop. You could be persuaded it has a 3.5 liter V6 under the hood.

But once it gets going – and the leverage advantage isn’t there – the modest amount of power on tap becomes apparent. It’s enough – just not plenty. It takes about 8.2 seconds to get to 60.

This is isn’t slow; it’s only about half a second behind what’s typical in the class. 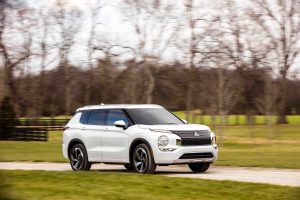 But there are times when you may wish there was more power available, as when wanting to get around a Prion-addled driver doing 42 in a 55 but with oncoming traffic in the passing lane closing the gap quickly.

Excepting that, it cuts the mustard. The fact is that if you’re on the  ball, you can almost always pass when you need to. Your timing decreases the amount of time needed – no matter what’s you’re driving.

Mitsubishi-Nissan does a really good job programming the CVT automatic to not behave (or sound) like one. It mimics shifts, even though it doesn’t (CVTs vary ranges) and – unlike some CVTs – this one will “shift” to a lower range as you accelerate rather than hold itself (and the engine) in a higher range, until you back off the accelerator.

The handling is good enough that this Mitsu-altered Nissan’s ability to cut apexes is limited by its tires, which squeal and slip long before the body rolls.

And like most crossovers – which have four wheel independent suspensions that can articulate each individual wheel with off-road irregularities – the Outlander doesn’t force you to crawl up washboard gravel roads to avoid knocking your fillings loose from the reverb. 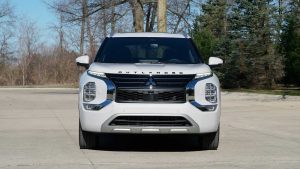 It’s the looks – as much as the warranty (and extra seats) that sell this thing – vs. the other thing.

If you didn’t know, it’d be hard to tell.

That goes for the inside as well as the outside. Especially if you choose the optionally available Tech package, which transforms this Mitsubishi into what looks a lot like the latest Land Rover. You sit before a digital instrument panel with a pair of offset scrolling wheels that display engine RPM and road speed. Engine turned facings, diamond-stitched/pleated leather-looking door panel inserts

Even the shifter looks familiar. 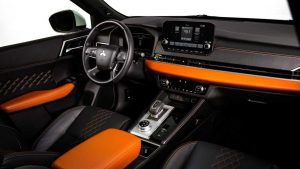 But the main difference – or rather, sell – is the Outlander’s extra row. It’s a shame it’s not a rear-facing row, which would give it the legroom that’s lacking as well as make access easy rather than difficult. This is a problem with almost all third rows, excepting those in super-sized crossovers (and SUVs) and – of course – minivans, which have those huge-opening dual sliding doors.

A rear-facing third row would also be a fun place to sit – especially for the kids these seats are generally meant for. Watching the world recede as the vehicle rolls is a lot more entertaining (and a lot more real) than watching another video on the DVD player. 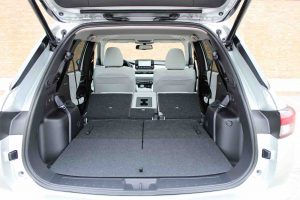 But the government – via its endless regulations – has made offering a rear-facing third row a non-starter, regardless of that orientation’s superior functionality. Speaking of which . . .

However, if you fold the Mitsu’s second and third row, you end up with a little more total cargo room – 79.7 cubic feet vs. 74.1 in the Nissan.

All trims – including the base $25,795 ES – come standard with 18 inch wheels, LED headlights, dual zone climate control and a six speaker audio system. The more expensive Rogue comes standard with 17 inch wheels, manual AC and a four speaker stereo. If you want the amenities that come standard with the Mitsu in the Nissan, you have to step up to the SV trim – which costs even more ($27,470) than the as-it-comes Outlander.

You can also get 20 inch wheels with the base trim ES – without having to step up to the more pricey SE and SEL trims, first.

Sometimes the same thing is better when it’s wrapped differently.