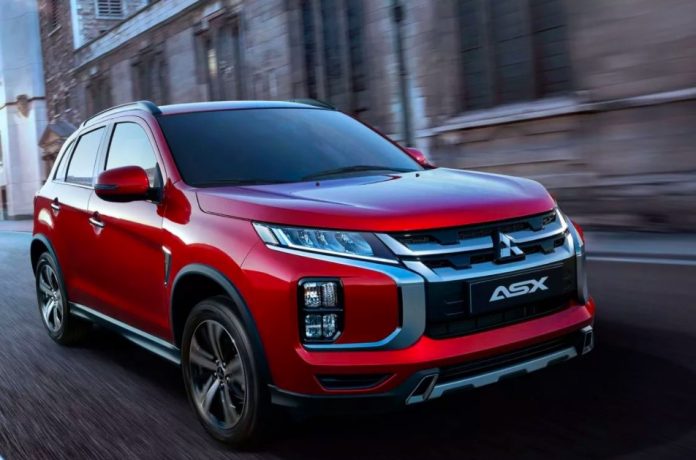 There are so many small crossovers on the market it’s hard to figure out which one to pick. Maybe eenie meenie miney moe?

Unless, of course, you want something different.

How about a V6, for instance? So you can pull more than a small car can? 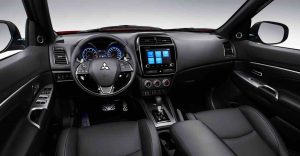 And a third row, too?

There’s one small crossover that offers all those things – for less than ay other.  It’s made by the smallest Japanese car company doing business in the U.S. – which is why almost no one knows about it.

The Outlander is a compact-sized crossover SUV that’s about the same size as better-known small crossovers like the Honda CR-V and Mazda CX3, et al. But unlike them, it is available with a third row and offers an optional V6.

The CR-V, CX3 ad pretty much all of the others come only with fours – and room for only five. They also tow no more than 1,500 lbs – which isn’t much more than a man cal pull with a rope and some determination.

In addition, the Mitsu’s optional V6 is paired with a six-speed geared automatic. Not a CVT (gearless) automatic. 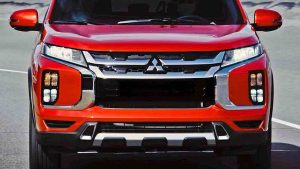 This will be of interest to potential buyers who don’t like CVT automatics for one reason or another (more on the why they don’t like them below).

And who are interested in towing 3,500 lbs. – which takes at least several men pulling on that rope.

Prices start at $24,895 for the base ES trim with a 2.4 liter engine and front-wheel-drive. This model does come with a CVT, by the way.

The V6-powered Outlander GT – which comes standard with AWD and without a CVT – lists for $33,745.

All but the base ES trim now come standard with an 8-inch touchscreen and additional USB ports for the back seat occupants. Mitsu has some hot-zig deals going, too – Because Corona.

If you have a job – or money – now is a very good time to shop for a car. This one or otherwise.

Not everyone wants a turbo’d four – or a CVT transmission.

If you need a third row – and don’t want something bigger – or much more pricey.

Third row up eats up cargo space behind it – if it’s in use.

CVT transmission is standard in all but V6-equipped GTs. 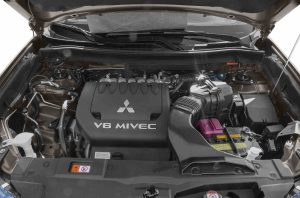 The Honda’s engine needs the turbo.

Without it, the CR-V would be SL-ow.

It doesn’t make quite as much power as the smaller turbo’d four that’s standard in the CR-V (166 hp vs. 190) but it is under less  pressure. Less boost, to be precise. A turbo force-stuffs the engine’s cylinders  nwith more air than they would otherwise inhale – in order to make up for the lack of size. Which would otherwise result in less power. But the additional cylinder pressure could mean shorter engine life over the long haul – and does mean more parts, right now – which means the possibility of eventually needing to repair or replace them. 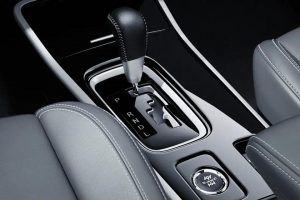 No such worries with the Outlander because the extra parts aren’t there.

You also have the option to buy a V6, something that’s very hard to find in a small crossover in 2020 – even in luxury-brand models that cost much more than this one does. Others in this price range come only with fours, some without even the enhancement of a turbo.

The GT’s 3.0 liter V6 makes 224 horsepower – which also makes the Outlander GT one of the strongest small crossovers you can buy. It is one of the few in its class that’s capable of pulling a 3,500 lb. trailer.

It’s also one of the few that comes with a six-speed (geared) automatic rather than a CVT automatic with no gears at all. 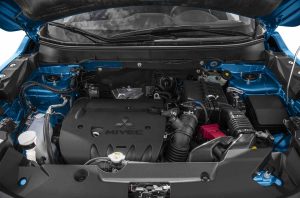 The Mazda CX3 does offer a conventional six-speed automatic rather than a CVT. But you can only get it with a 2.0 liter (148 hp four) and that’s all you can get.

There’s not much towing – and very little going.

With the four cylinder engine, the Outlander’s posts 25 city, 30 highway – slightly lower than the slightly stronger CR-V’s 27 city, 32 highway but well within the margin of error. It’s be interesting to see whether the boosted four in the Honda actually delivers its touted mileage in real-world driving – where the boost is probably on more than it is when the car is being driven as if it had an egg under the accelerator to achieve the highest-possible score on government fuel economy tests.

This is an issue with all turbo’d cars. Don’t buy the window sticker numbers before you drive the car.

The V6 Outlander’s city mileage (20) is noticeably lower than the four cylinder version’s but once on the open road, it pulls down 27 MPG – also within the margin of error vs. the four cylinder’s 30 MPG and may prove to be better in real-world driving because the V6 won’t need to work as hard – or stay on boost  – to maintain 75 or 80 MPH.

Not in a ne’er do well way but literally. There are no speeds, just ranges – continuously variable. This is a more efficient way to do business because the transmission is always in the the right range for any given driving condition while a transmission with gears must shift up – or down to get into the right gear for a given driving condition. And each gear is almost never exactly the right gear for a given condition.

That usually means using a bit more fuel vs. the same vehicle with a CVT – and always means you can feel the shifts from gear to gear. 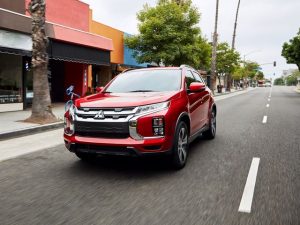 On the downside – with CVTs – there are no shifts. Instead, a turbine-like forward progression. Which on the upside is very smooth.

But on the downside, it also sometimes means a lot of revs as the transmission slips into the right range – and stays there. With a conventional/geared automatic, the RPMs decrease with each upshift. With a CVT, the RPMs increase – and sometimes stay increased until you ease off the gas.

Some people dislike that feel – and the sound which goes with it.

Also, CVTs – though much improved since they first appeared about 20 years ago – still seem to have more post-warranty problems than geared automatics.

The Outlander gives you the option to go either way.

And if you go with the optional V6, you’ll go a lot faster a lot easier than other small crossovers with fours.

It’s just a shame that Mitsu doesn’t offer a six-speed manual in this thing – either with the base four or the optional V6.

That would be really different – as well as all kinds of fun!

Still, the Outlander is different enough in a segment defined by a stultifying homogeneity of look and feel and equipment, too. It is almost an outlier – a tonic badly needed to resuscitate interest in a segment full of appliances with the emotional appeal of washing machines. 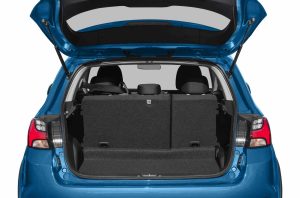 The Outlander is different in another way – which has its upsides as well as its downsides.

On the upside, it offers seven passenger capacity – unavailable in most small crossovers.  On the downside, the extra row of seats greatly reduces cargo capacity behind the third row when it’s in use – to just 10.3 cubic feet. This is less cargo room than some two-door sports cars have.

And much less room than two-row/size-equivalent competitors like the CR-V have (39.2 cubic feet) behind their second rows, when they’re in use.

But if you don’t need to carry more than five at the moment, you can stow the third row and increase the available space by a factor of five to 63.3 cubic feet, which is only about 10 cubic feet less than the CR-V’s maximum of 75.8 cubic feet – and several times more room than any sports car has. 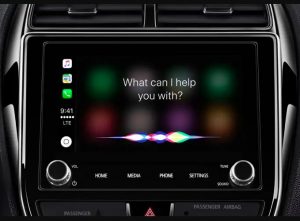 All trims but the base ES come standard with a larger-than-usual 8-inch LCD touchscreen and you can get that in the base ES as part of a package that also gets you heated seats and AppleCarPlay and Android Auto, along with a Sirius/XM trail subscription.

Every trim has 8.5 inches of clearance, too – enough to get away without the optional AWD system and still get where you’re going in light snow – clearance being at least as important as all four wheels turning.

This crossover is one of the few that lets you disconnect the AWD (if you ordered it).

Most of the others with AWD are always in AWD, which means  some power is always being kicked to the rear as well as the front wheels, which is like sprinkling salt on a steak you’re not going to eat.

Also unusual is the Mitsu’s lock feature. Some AWD-equipped vehicles offer this. But the the Mitsu’s lets you lock the power split 60-40 rear to front rather than the typical 50-50, front-rear. The effect is a feel more like a rear-drive vehicle even though the Outlander is a front-drive-based vehicle. 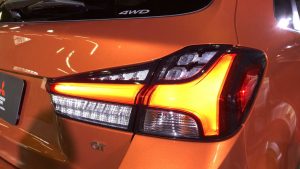 Mitsubishi – a much smaller (and much less advertised) brand than Honda or Toyota or Mazda – probably isn’t the first blip on most people’s radar. But for exactly that reason, the Outlander ought to be on your list – and not only because it offers that V6 and the extra seats.

You are likely to get a better deal – Corona notwithstanding – because Mitsubishi dealers need your business. And there’s the additional comfort of a five year/60,000 mile whole car warranty, better than the usual three years/36,000 miles.

It’s true the Outlander is apt to depreciate faster – but that will only matter if you don’t keep it till the wheels fall off. And if you paid substantially less for it to begin with, it won’t matter at all.

When you’re different you have to be a little daring.

This thing isn’t going to make you jump out of bed. But it’s less likely to make you fall asleep than some of the others.