Given that the Mitsubishi EclipseCross is priced higher than its better-equipped rivals – models like the Subaru Crosstrek and Honda HR-V – and given that it’s a bit less roomy – is there any sound reason to consider buying one?

There’s a big one, actually.

The big one is the fact that it’s a Mitsubishi – which can benefit your pocketbook. 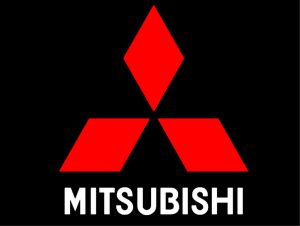 Subaru and Honda – and the other big names – negotiate from a position of familiarity and strength. They have buyers lined up out the door – and if your offer isn’t high enough, the dealer knows he can wait for the next buyer to make a better offer.

Mitsubishi, on the other hand, is fighting hard for market share; fighting to get noticed by prospective buyers – many of whom aren’t even aware the ElcipseCross exists.

Or that Mitsubishi does.

That means your local Mitsu dealer is much more likely to be willing to  . . . deal.

Oh – and that other thing?

The EclipseCross is a subcompact, five-door crossover SUV that’s similar in layout and size to others in this class like the Subaru Crosstrek and Honda HR-V.

It’s available in front-drive and all-wheel-drive versions, like most of the others – and unlike some of the others, it comes standard with a punchy turbocharged engine.

This is something that neither the Subaru Crosstrek nor the Honda HR-V even offer – no matter how much you offer.

That’s the other thing! 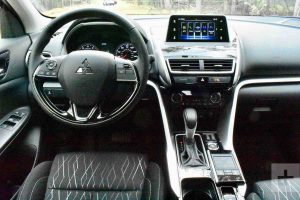 A top-of-the-line EclipseCross SEL with AWD stickers for $28,595. 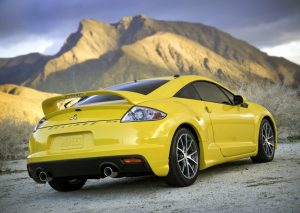 The EclipseCross is a new vehicle from Mitsubishi that resurrects an old name – the Eclipse part. That was the name of Mitsubishi’s two-door sports car, which Mitsubishi doesn’t make anymore. The hope is that bringing back the name will convey sporty memories.

The Cross part is meant to convey the obvious – or desirable – when people shop crossover SUVs.

Thus, a sporty crossover – and one with a name instead of another number. 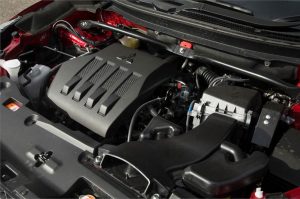 But it makes 152 horsepower – the same as the Subaru’s larger 2.0 liter engine and more than the Honda’s also smaller 1.8 liter engine (141 hp) as well as much more torque – the twisting force that is what gets a vehicle moving.

While none of the vehicles in this class are hot rods, the EclipseCross is slightly hotter than its main rivals, getting to 60 in 9 seconds flat vs. closer to 10 for the Subaru and in between 9 and ten for the lighter but less powerful Honda.

All versions come standard with a continuously variable (CVT) automatic transmission that has eight simulated gears. 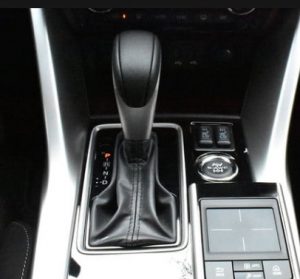 CVTs, by definition, have ratios rather than gears. The difference is that the CVT transmission transitions from ratio to ratio – continuously varying that ratio – without  shifting. A geared transmission “steps” (up or down) from gear to gear; the ratios chosen by the engineers are fixed.

But the CVT can be held at a given ratio, to simulate a fixed gear (e.g., first, second and so on) but without the gear-changing (and shift shock) one experiences with a fixed-geared transmission. 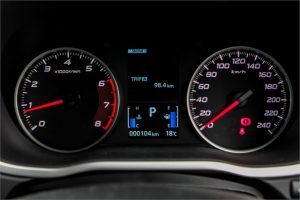 Some reviewers give the EclipseCross demerit points for lesser fuel economy than its rivals (which are also CVT-equipped). The Mitsu manages 26 city, 29 highway for the FWD version and 25 city, 28 with AWD – a bit less than the others but well within the margin of error for the class. The Crosstrek (AWD) rates 27 city, 33 highway; the FWD HR-V posts 27 city, 31 highway.

Not a big whoop’s difference.

The little turbo’d engine is a regular fuel engine, too. Unfortunately, it’s a direct-injected engine, so there’s the potential for carbon fouling as the miles rack up. The Crosstrek’s engine has the same vulnerability – but the Honda HR-V’s engine isn’t (yet) direct injected. 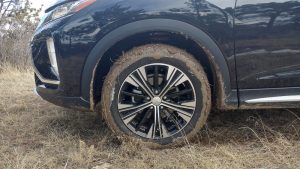 The Mitsu’s optional AWD (styled Super All Wheel Control) can modulate power delivery to individual wheels, not just front-to-back. This is a handling advantage as well as a traction advantage, because the system can use the individualized power flow to stabilize the vehicle’s line while cornering, correcting for under-and-oversteer without using the ABS to pump the brakes (a clunkier way of accomplishing the same thing).

And unlike Subaru, Mitsu gives you the option to skip AWD entirely – if you don’t feel the need for the extra grip in the corners (and bite in the snow) and prefer a simpler drivetrain with fewer parts to potentially replace.

The EclipseCross feels much stronger than its rivals in stop-and-go driving especially, where it has the advantage of that turbo-boosted torque. The non-turbo’d Crosstrek and HR-V need to be revved before they move. Neither has much guts below 4,000 RPM.

They’re ok once rolling, but getting rolling is the challenge.

The Mitsu also benefits from a really steep final drive ratio – 6.386 – which gives the leverage of an eighth -mile bracket racer, but without the screamin’ Mimi RPM at the end of the eighth mile (or at 80 MPH) because of a commensurately deep .404 overdrive ratio, courtesy of the CVT. 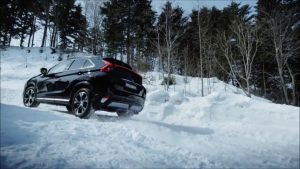 To put this in some perspective, a V8 muscle car will typically have a 3.23-3.90 final drive ratio and an overdrive ratio in top gear around .67 or so. If the Mitsu had the power of a V8 muscle car, it’d be a 10 second quarter-miler with a 200 MPH top end!

The CrossTrek also feels exceptionally planted on the highway – for a crossover – because it’s heavier – and lower to the ground.

Mitsubishi gave it eight inches of ground clearance – not quite as much as the Crosstrek’s class-leading 8.7 inches – but enough clearance to be good in the snow without getting too much air under the thing, the enemy of stable handling at highway speeds.

The Eclipse also has longer highway legs than some of its rivals – even if it gets slightly less miles-per-gallon – because it has a nice big gas tank (16.2 gallons). 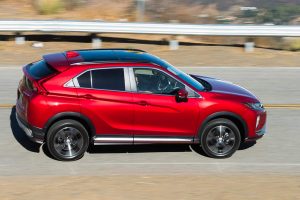 FWD versions have something over the FWD versions (and some AWD versions) of rival crossovers, too: A standard yaw control system that uses selective application of the ABS to maintain stability during high-speed cornering. It lets you keep the power on while in the curve without unsettling, computer-ordered dialing back of the the throttle – which some other systems automatically do when a vehicle begins to squeal tires in the curves.

If you like that kind of action, the Mitsu allows more of it . . . echos of the EVO.

Crossovers are bought mostly for their utility, not their individuality. Here you get a bit more of the former – in exchange for a bit less of the latter. 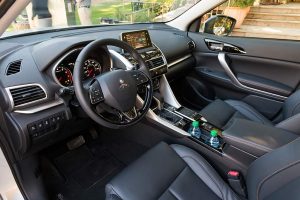 Dramatic upward arcing “swoosh” lines are stamped on each side that meet to form the ends of a flying wing single-piece rear brake/parking light panel that will make it easy to find your Mitsu in a parking lot full of other-brand (but look-alike) crossovers.

There’s a lower arc-line stamped into the rocker panel along the door bottoms that tapers in parallel, then swooshes upward as it hockey-sticks toward the rear, then flows over the rear wheelwell, creating a haunchy squat – like a cat getting ready to leap on its prey.

It’s maybe a bit fustian – but at least it’s not same-same.

There’s a bit less room for legs and cargo, though. 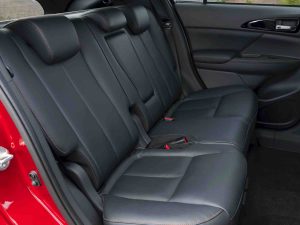 For a vehicle that’s only 173.4 inches long (for a sense of the smallness of this footprint, a Honda Civic sedan is 182.3 inches long) the Mitsu is very roomy. Especially for cargo. The almost-a-foot-longer Civic sedan has only 15.1 cubic feet of trunk space. 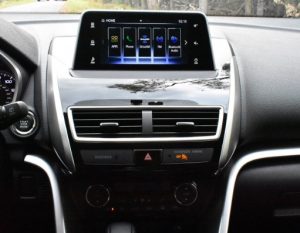 Mitsu cribbed some interior styling touches from others – including the BMW-looking iPad-style seven-inch LCD touch screen to the right of the dashboard – and the Lexus-like mouse trackpad on the center console.

Also Lexus-like are such options as rear seat heaters, a Heads-Up-Display and an excellent, 710 watt Rockford Fosgate premium audio rig with huge bass boomers mounted in the cargo area.

But you can’t get many of these items unless you buy the higher LE and SEL trims, which can push the price to almost $30k. That’s a lot of money for what is still fundamentally a subcompact and entry-level crossover. 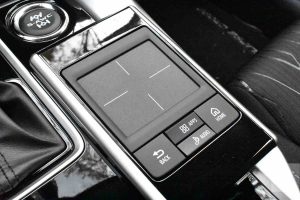 Mitsu does allow you to buy some options a la carte, including the panorama  sunroof and heated rear seats.

One possibly creepy thing that comes standard in all trims is Firmware Over The Air (FOTA) “updates” sent from the Hive Mind via the MitsubishiConnect system. The good news is it’s subscription-based and you can decline to “subscribe.”

Mitsu – like VW – is a brand trying to recover customers. Both brands hit upon the idea of offering much-better warranty coverage than competitors as an inducement. Blue chip brands like Honda and Subaru can still get away with offering three-year/36,000 mile basic coverage on their cars. 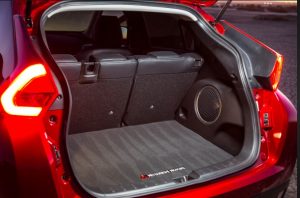 This can be seen as the equivalent of spending a couple grand extra for an extended warranty on a Crosstrek or HR-V.

And there’s the Haggle Factor to consider. The chances of rolling out of a Mitsu store in a new EclipseCross for much less than sticker are much higher than accomplishing the same in a new Crosstrek or HR-V.

The downside is that Mitsu stores are fewer – and it may be harder to find one near you. But that is mostly a one-time pain in that you can get the thing serviced almost anywhere, once you’ve bought the thing.

There is one other downside: Depreciation.

Because Mitsu is struggling to rebuild, Mitsu’s vehicles lose value faster than the blue chips. That has no bearing on the soundness of Mitsubishi vehicles, per se – but it does mean your EclipseCross will probably be worth less as a used EclipseCross than the equivalent blue chips. 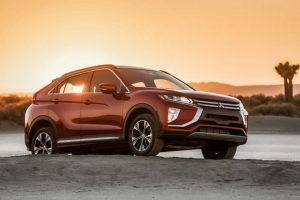 That will matter if you trade-in. But it’s irrelevant if you plan to drive it until the wheels fall off.

If you can pick one up for say $24k loaded up, it’s still a deal – depreciated or not.

The EVO was exciting; the Eclipse was fun. This one’s more practical – and it just might sell.