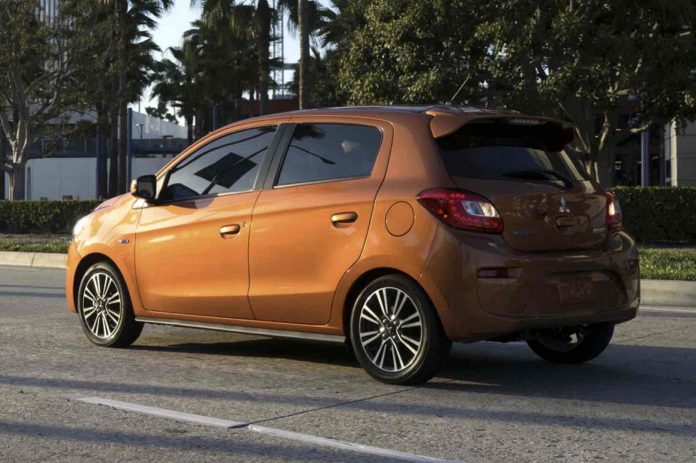 Saving money on gas is great – but how about saving money on the car? If it costs you less, then you have more in your pocket to spend on gas.

And on other things.

A simpler car – one without turbos, ASS or direct injection – is also less likely to hit you with high-dollar repair costs down the road. And if it has a better warranty than other cars, you won’t have to pay any dollars for repairs until you’re farther down the road. 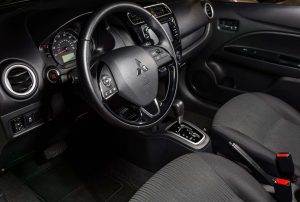 Now add some features most buyers consider essential – and which used to define a luxury car – such as power windows and locks, cruise control and USB ports – and don’t charge extra for them.

That’s the case made by Mitsubishi for the Mirage – which is one of the least expensive and best-equipped new cars available for less than $14k to start  – as well as one of the best-warranted and most fuel-efficient. 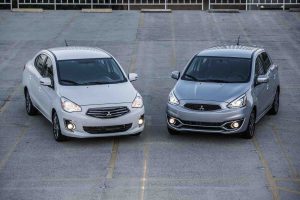 The Mirage is a subcompact sedan/hatchback emphasizing value and high mileage – without making you pay extra for either – or for amenities such as AC, power windows, locks and cruise control.

It is also the only car with a sticker price less than $14k that gets 40-plus MPG on the highway without a hybrid drivetrain or a turbocharged engine or other fuel-saving but cost-adding technology.

It isn’t even slow – though you may have read that it is.

So what’s is the catch? 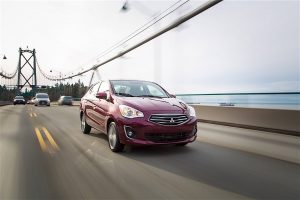 It’s a Mitsubishi. Not that there’s anything wrong with that. The problem is the perception that there is – which acts like a cement block tied around a cat’s neck – as far as depreciation rates are concerned.

But that is only a concern if you don’t plan to keep the car very long. If you plan on driving it for at least eight years, depreciation is a near-irrelevance regardless of brand.

The other thing – perhaps more relevant – is that Mitsubishi stores are harder to find and there may not be one within convenient orbit of you. But that’s only an unavoidable hassle when it comes to buying one.

Once bought, you can have it serviced anywhere. 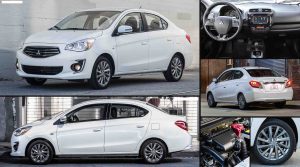 The Mirage’s main low-cost rival is the not-as-well-equipped Nissan Versa (base price $12,360). It’s even more basic and costs less to start, but does not come standard with power windows, locks or cruise control. 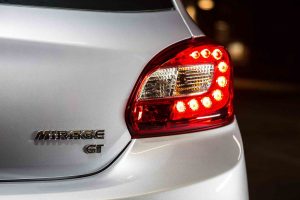 Doesn’t cost much more than a motorcycle – but seats five (and out of the weather).

Noisier getting up to speed – and at speed.

Mitsubishi dealers aren’t as easy to find as Honda/Toyota/Hyundai stores. 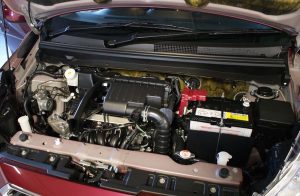 The Mirage is one of the very few new cars you can buy that has fewer than four cylinders under its hood – just 1.2 liters, or about the same size as many motorcycle engines.

It is also the only new car with less than 100 horsepower under its hood.

But unlike the other cars available with three cylinder engines – such as the BMW Mini Cooper – the Mirage’s engine is not muscled up by a turbocharger to compensate for its very small displacement. 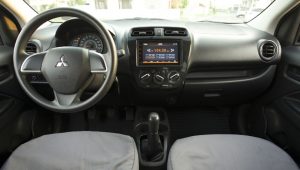 Without a turbo, the tiny (but heavy) Mini would have trouble moving at all.

The Mirage doesn’t move very quickly – zero to 60 takes about 10.6 seconds – but that’s on par with others in this class, like the Versa –  and sightly quicker than the Toyota Prius hybrid.

It’s true the Prius averages 50-something MPG, but it also stickers for $10k more to start than the Mirage – and that buys a lot of gas.

And the Mirage is easy on gas, too.

It’s capable of 41 on the highway and 35 in city driving with the standard six-speed manual transmission, according to the EPA. I averaged just over 34 MPG during a week-long test drive. 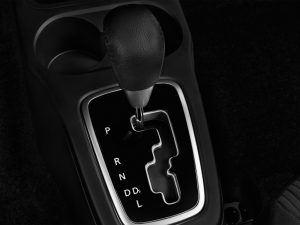 Other than hybrids, few cars do better at the pump than the Mirage – and those that do only do so by a couple of MPGs, which isn’t of much monetary benefit because of their higher buy-in cost.

This includes the Nissan Versa sedan – which does cost less to start but more once you buy the options it needs to be features-competitive with the Mitsu, it costs more.

The Nissan’s mileage is also lower – 31 city, 39 for the base version with manual transmission. With the optional CVT automatic, the numbers rise to 31 city, 39 highway – but that’s still less than the Mirage rates.

So there you go. 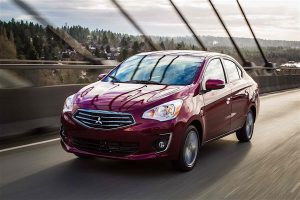 The Mirage isn’t slow relative to other currently available subcompact economy cars – but it is noisier than average.

This isn’t so much a horsepower issue as it is a sound-deadening issue. In order to keep the Mirage as light as it is – so that it can get away with having less than 100 horsepower (and no turbocharger), there’s less carpet underlay and firewall/door panel padding to muffle road and engine noise.

So you hear the engine – and the road – more. 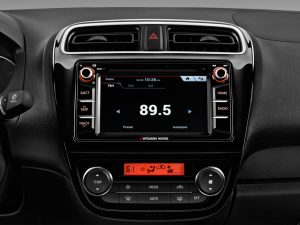 The upside is adequate power for most driving scenarios – and excellent mileage no matter how you drive it – from a very simple (for a modern car) engine that will never hit you with a $3,000 bill for a new turbocharger or intercooler – because it hasn’t got either thing.

The other catch with turbo’d engines is that if you use the boost, real-world mileage is sometimes much less than advertised. Spend less on a car great but spending less on gas is easier when you are near them. The reason being that the boost temporarily inflates the displacement of the engine, which makes more power – but more power does not come free.

A tiny, turbo’d engine can tout impressive city/highway numbers, but they’re based on not using the turbo. In the real world, the mileage can be . . . disappointing. 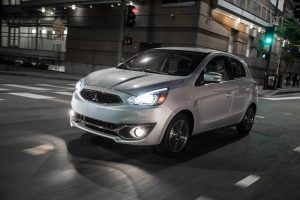 With the Mitsu, the touted mileage syncs with the real-world mileage because it really doesn’t matter how hard you put your foot down. There’s just 1.2 liters on the other end – not 1.2 that can be inflate to 2.5 via boost pressure, for as long as you keep your foot down.

As is true of almost most small-engined small cars, the Mirage is most fun with its standard manual transmission, but the optional continuously variable (CVT) automatic is the best choice for maximum MPGs.

Either way, though, you’ll get there – and in good time.

Those who fault the Mirage’s  ability to accelerate make unfair comparisons with speedier – but more expensive cars and forget that a 10-something-second timeslip to 60 is competitive with the timeslips of other economy cars – the Versa, for instance – and very speedy in historical terms. A VW Beetle – the classic model, with the engine in back – needed almost 30 seconds to get to 60.

And didn’t go much faster than that. 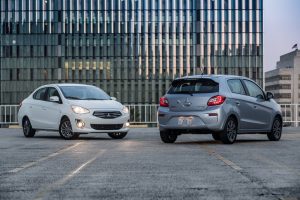 One of this car’s draws is that it’s available in both sedan and hatchback versions – your pick, no extra charge. Which also gives the option to go with a conventional sedan’s trunk (12.3 cubic feet of space) or a liftgate and cargo area behind the back seats – and 47 cubic feet of space.

It’s also got a lot of room – for people – in both its rows. Legroom up front is 41.4 inches and in back, 37 inches – which is comparable to cars two sizes larger on the outside. 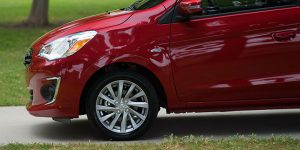 Some reviewers make fun of this car’s proportionately small wheels (15s are standard) but these are sensible shoes for an economy car. They cost less to put on the car, for openers. And they cost you less down the road – in the form of lower rolling resistance (which manifests as higher gas mileage) and cheaper tire replacement costs.

There also isn’t an eBrake – an electronically activated parking brake. Instead, an “old fashioned” brake lever you pull up to engage. It’s simple – and effective. And if it ever brakes, it will be cheaper to fix than the more elaborate eBrake. 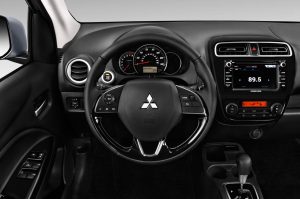 This is a car, in sum, like they used to make ’em. It doesn’t attempt to justify a $20,000 price tag with $500 worth (cost to install; triple cost to you) of gewgaw gadgets to electrify or automate simple things that don’t require automation.

And yet, it has all the amenities which once defined a luxury car – AC, power windows and locks, cruise control, a good sound system and (hat tip to modernity) a good-sized LCD screen with the apps and Bluetooth’d stuff people expect.

The main worry here no longer is. 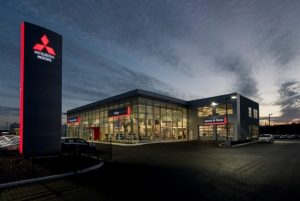 Mitsubishi – the company – has pulled itself back from the abyss. It had been in real trouble, chiefly because of losses incurred by its “zero down, zero payments for a year” financing offer – which got lots of people into Mitsubishi vehicles, but not paying for them.

That debacle is over with – and the company is well on the way to recovery now. So don’t worry about the company going belly up and being left with an orphaned car.

The other worry is finding a Mitsubishi store near you. 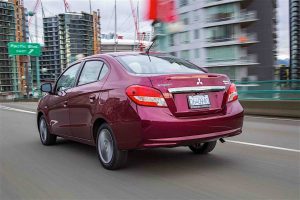 Buying a Mirage may not be as easy as buying a Versa – or a Corolla or Civic or Accent. You might have to travel farther than down the street – or across town – to find a Mitsu store vs.  a Nissan, Toyota, Honda or Hyundai store.

But it might be worth the trip – since you’ll only need to do it once.

After you buy the car, you can have it serviced anywhere.

If you want to reduce your ownership costs as well as your fueling costs, it’s hard to do better than the Mirage.

Without having to rough it.