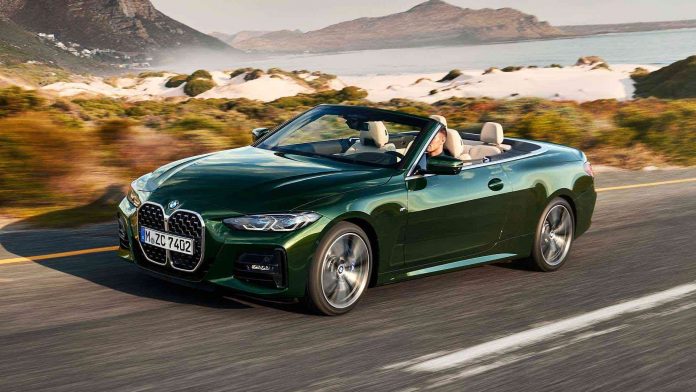 Retractable hardtops have their virtues – the chief one being that when the top isn’t retracted, you have a solid roof over your head. Also over what’s in your car. It is harder to slice open a hardtop than a top made of cloth.

But, retractable hardtops are heavy. And they take up even more space than a soft-top – in the trunk – when they’re retracted .

Because you can’t just fold them up.

That may explain why BMW decided to go back to a soft-top for the 4-Series convertible. 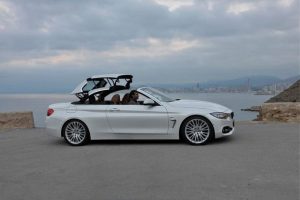 There used to be coupe/convertible versions of  BMW’s 3 Series sedan – and there still are.

The Fours (which seat four) share their underlying chassis with the Three but have two fewer doors and – in the case of the convertible Four – one less roof.

Prices begin at $45,800 for the base trim 430i coupe; the new soft-top convertible version of the same thing stickers for $53,300. Both are rear-drive and come with a 2.0 liter, turbocharged four cylinder engine that makes 255 horsepower. It’s paired with an eight speed automatic.

There is no manual transmission option.

There is also another option.

BMW offers a much more powerful (and not much more thirsty) turbocharged in-line six in the Four. It adds 127 horsepower, subtracts more than a second from the car’s already speedy 0-60 capability without adding significantly to what you’ll spend on gas.

It does this by cycling the powerful six off when you don’t need its power – as when decelerating or not moving – using a high-torque flywheel-mounted starter/generator 48 volt electrical system which also boosts the total output of the drivetrain to 382 horsepower. 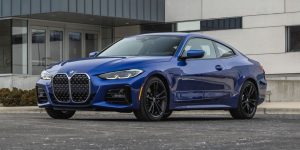 In addition to the new kind of roof, both of the Fours’ available engines are stronger than they were previously. A new five-door version of the Four called the Gran Coupe is on deck (for later in 2022) that has a hatchback and on account of that, about four times as much space in its trunk than the coupe/convertible.

New soft-top is 40 percent lighter than the old retractable hardtop (and you can “retract” it while the car is moving, at speeds up to 31 MPH).

More headroom (and trunk capacity) in the soft-top than the old retractable hardtop.

No mileage penalty for choosing the much more powerful in-line six.

Soft-top is more vulnerable to tears and may be harder to keep it looking good, over the years.

$10k-plus price bump to go from the four to the six. 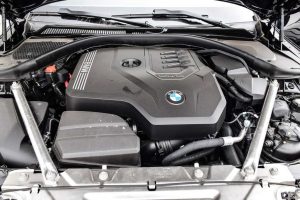 Like so many new cars – no matter their doors or their roofs – the 4 Series comes standard with a  . . . 2.0 liter turbocharged four cylinder engine. This engine size is becoming almost universal – irrespective of make/model – chiefly on account of it being big enough (when turbocharged) to produce big enough horsepower while being small enough to produce not-too-much in the way of verboten “emissions,” which lately has come to include carbon dioxide, the gas that doesn’t cause or worsen air pollution but which is believed by some to be responsible for “climate change.”

The government believes this enough to make it very difficult to put engines larger than 2.0 liters in new cars and that’s why you see so many 2.0 liter engines in so many cars, including this new BMW. 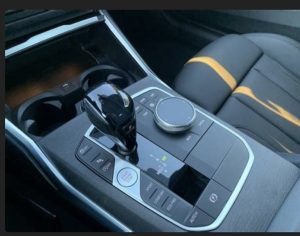 It makes 255 horsepower – a significant bump up from the previous 248 – and 294 ft.-lbs. of torque at only 1,550 engine RPM. This latter figure is in real-world driving terms the most important figure and it is a benefit – to us, the people who buy these cars – because the superabundance of torque made almost as soon as you turn the key (or in this case, push the button) makes this relatively small engine feel like a much larger engine.

Before turbocharging small engines became common, it was generally necessary to buy a big engine (or a diesel engine) to get a superabundance of low-RPM torque – and the cost of that (in addition to the cost of the bigger engine, itself) was almost always a much thirstier engine – since that big engine was constantly inhaling a lot of air and fuel, even when not being revved much.

Here, you have an engine that makes the torque of a much larger engine with the appetite of a smaller engine – 23 city, 33 highway for the rear-drive M430i. Provided, of course, you don’t increase how much air it’s breathing (and how much fuel it’s demanding) by waking up the turbo, which transforms the appetite of the little engine into that of a bigger engine. 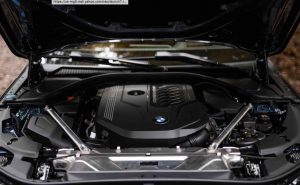 Equipped with this engine, the Four coupe gets to 60 in about 5.3 seconds; the convertible – which is still heavier despite having a top that’s 40 percent lighter than the previous retractable hardtop – gets there in about 5.9 seconds.

Adding the optional xDrive AWD system knocks a tenth or two off the times of both.

If you want more than a 2.0 liter four, you can opt for the 3.0 six, which is an inline six rather than a V6. The in-line layout has a number of objective advantages over the “v” configuration, chief among them not needing a heavy balancer on the crankshaft to counteract vibrations as the inline configuration is naturally more balanced. Having a lighter reciprocating assembly means the inline six revs more freely and faster. Many enthusiasts also prefer its sound, though that is a subjective consideration.

The chief detraction of the in-line layout is that the engine is longer – but that’s not an issue in a rear-drive car like this BMW, which has a long nose and plenty of room under its hood. 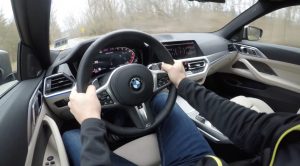 Normally, an engine this size – and this strong – would use a lot more gas. But it uses about the same quantity of gas (23 city, 31 highway) as the 2.0 liter four, in spite of its size.

Because it’s often not using any.

This engine is automatically cycled off when its power isn’t needed, as when you lift your foot off the gas during deceleration and also when the car is stationary. This is similar to the stop-start system used in almost all new cars but very different in that you won’t notice the stop-starting unless you closely watch the tachometer and notice the the engine RPMs dropping off. 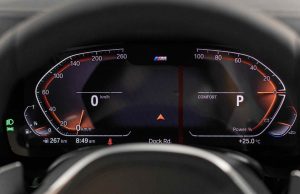 You won’t notice it by feel – as you would in a car equipped with the more primitive stop-start “technology” that simply shuts off the engine when the car isn’t moving and then uses the starter – powered by the 12 volt starter battery – to noticeably crank it back to life.

The BMW’s six has a starter/generator bolted to its flywheel that is immensely stronger than a standard starter that’s geared to the flywheel. It is also powered by 48 rather than 12 volts. This allows instantaneous – and imperceptible -restrarts. The flywheel generator also gins up electricity whereas the more primitive stop-start systems just drain the (already over-taxed 12 volt) battery.

The downside is the cost, which limits how many will be able to afford more engine – even if it doesn’t cost them more at the pump. 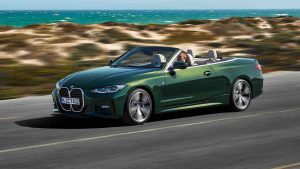 There’s little to fault – objectively – as regards the Four’s standard four. How can you fairly fault a four that gets a nearly two-ton (3,918 pounds, empty) car to 60 in just over five seconds? That’s also capable of getting close to 35 MPG on the highway, assuming you keep a light right foot?

But then there’s that six.

It’s not so much the additional power – though that’s a perk, for sure. It’s the sound – and the smoothness. The revvy-ness, too. 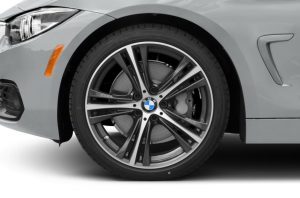 No matter how good a four is by the numbers, it will never sound as good as a six. An inline six, like this.

It is not something that’s fully conveyable in words. It requires ears. Both engines will spin to nearly 7,000 RPM and both produce their peak horsepower number at the same 5,000-6,500 RPM.

But the six sounds better getting there. Feels it, too. It is a crying shame there’s no shifter in between the driver and passenger seats – rather than a gear selector – so you could feel the absence of driveline vibration.

And work that six, yourself.

BMW retorts that the eight speed automatic shifts more accurately, more quickly – and by the numbers, this is inarguable because it’s true. But sometimes, numbers don’t convey nuance. How do you quantify the best steak you ever ate? Of course, it’s hard to make that same steak again. But that is part of the charm of the thing. 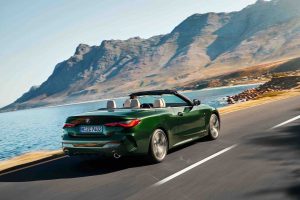 Regardless, the six remains – so thank god (thank BMW) for figuring out a way to make it so. The flywheel-mounted generator/starter system is so good you might not be aware it’s there – unless you read about it.

But that is the price we pay for being allowed sixes in an environment increasingly hostile toward anything larger than a 2.0 four.

Even in a car such as this. 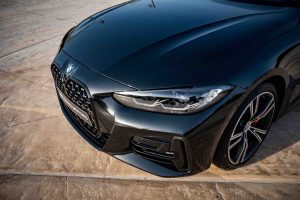 Some people prefer the hard-top looks of a retractable top, when the top isn’t retracted. Others like the look of a soft-top, when it’s up.

Headroom is also increased, which makes this sporty car more viable for the tall.

You can also drop this top without having to stop. So long as you’re not going faster than 31 MPH. Just push the button and motor on. 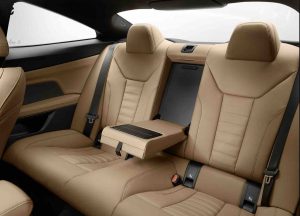 There is also another likely benefit – over time. Retractable hardtops are ingenious but complex. If you’ve ever watched the choreographed ballet of one lowering itself into the trunk, you’ll already know all about it. But lots of moving pieces equals more potential for something to stop working. And start costing.

Convertibles are much simpler; their tolerances don’t have to be as exacting because cloth can’t be made as exacting as metal. There is wiggle room.

Convertible tops usually prove to be more reliable as the years go by because there’s less to go wrong. The big downside, of course, is that they are easier to get into. Without using a key. 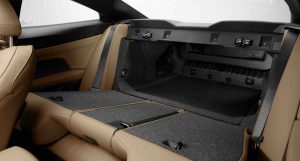 But you won’t get cold.

Convertible Fours feature a heat duct built into the headrest (it can be controlled independently of the main cabin heating controls) that warms your neck and shoulders; three-stage seat heaters warm your backside. This is a convertible  that can be driven top-down in weather that would otherwise force you to keep the top up.

It is also one of the few convertibles you can still get, period. 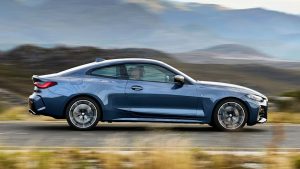 Fours with the six get both launch control and a new Sprint setting that opens up the exhaust, drops the eight speed transmission into the next-lowest gear and sharpens up throttle response. It’s just the ticket for those moments when you need a little extra giddyap.

Not everyone is a fan of the new Four’s double kidney grille. It’s a love or hate deal, like sushi. Same goes for the angular tachometer/speedo in the instrument cluster. It’s not as naturally fluid as traditional circular gauges. 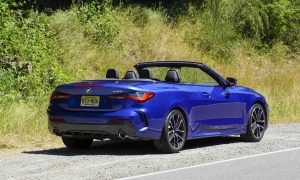 Most will like that BMW still includes a 12V power point – a thing many new cars no longer come with (or which they hide in awkward to reach places). In the Four, it’s right there – ahead of the gear selector, where it’s easy to plug in devices that don’t use USB hook-ups, such as radar detectors.