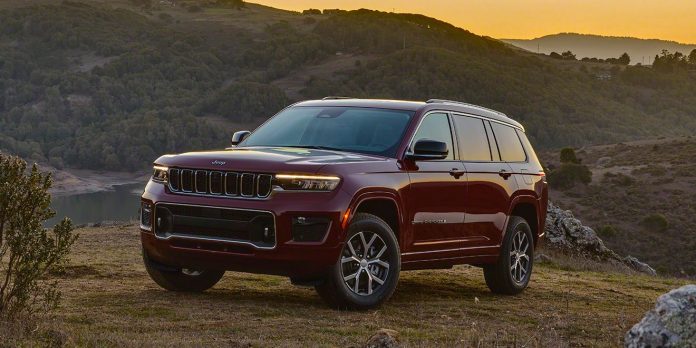 A few weeks back I wrote about the new Ford Explorer – one of the few mid-sized, three-row SUVs available in a segment dominated by car-based crossover SUVs.

The Explorer is rear-drive and offers 4WD – as opposed to the usual crossover FWD/AWD layout.

This week’s review is about one of the few remaining mid-sized, two-row SUVs in the same class that is available with something the Ford doesn’t offer:

Unlike the Ford Explorer – which became a crossover for awhile – the Jeep Grand Cherokee has always been an SUV.

It is now the only SUV in this class that’s still available with a V8 engine.

So equipped, it has much more towing capacity (7,200 lbs.) than other SUVs in the class like the Ford Explorer and the Toyota 4Runner – and far more off-road capability than the crossovers in this class that look like SUVs.

Prices start  at $37,390 for the base rear-wheel-drive Laredo trim; opting for four-wheel-drive raises the sticker price to $39,300.

There are six other trims available, including the Trailhawk – which comes with 4WD standard, plus a locking rear differential and adjustable ride height for extra ground clearance, an electrically decoupling front sway bar to allow for greater wheel articulation, revised bodywork for increased angles of approach and departure – the works riding on a set of Goodyear all-terrain tires. 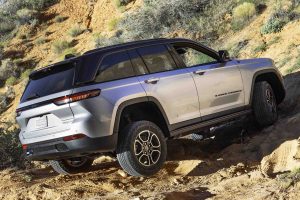 A top-of-the-line Summit Reserve, which comes with massaging seats, wood and quilted leather trim and an additional LCD touchscreen built into the front passenger’s side of the dashboard – for independent watching of streaming TV shows and such – lists for $63,3675.

In addition to that, there’s also a 4xe plug-in hybrid option on deck for later this year. This version of the GC will be able to travel about 25 miles on battery power alone. It will also be the most powerful version of the Grand Cherokee available.

Jeep hadn’t posted official prices for the 4xe when this review was written in mid- January, 2022 but they’re expected to be in the neighborhood of $50,000.

The ’22 GC gets a major redo after more than a decade in its prior form largely unchanged. Most of the obvious changes revolve around tech – and luxury – including the above-mentioned 10.2 inch front seat passenger-side LCD screen and Amazon Fire TV, an available fully-digital/configurable main gauge cluster for the driver, 19 speaker McIntosh audio system and those multi-mode massaging seats. 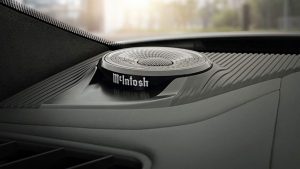 The previous GC’s standard V6 and optional V8 engines carry over – which is near-miraculous news, given the pressure being applied to downsize engines and pair (or replace them) with electric motors.

There’s also a subtly reworked exterior look and a bit more room for cargo inside.

Interestingly, if these changes do not appeal to you, Jeep is still selling last year’s GC as a new 2022 model year vehicle, alongside the revamped 2022 model. The old (but still available, new) GC is now called the Grand Cherokee WK. It’s for the buyer who wants something new that’s also something old – and a bit less expensive ($35,865 to start). 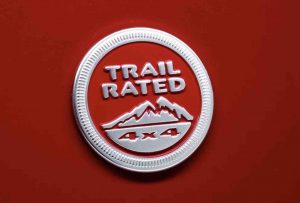 Not just 4WD. Multiple 4WD systems, each varying in capability.

Opulence – and capability – without compromising either.

V8’s availability is limited to the Trailhawk, Overland and Limited trims. 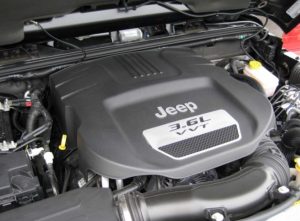 The GC’s standard 3.6 liter V6 engine is larger than many rivals’ optional engines – including the Explorer’s top-of-the-line 3.0 liter V6.

Other versions of the Explorer come standard with an even smaller 2.3 liter four cylinder engine, also turbocharged. It makes 300 horsepower – dead heat with the Jeep’s standard V6.

Without needing a turbocharger.

Rear-wheel-drive and an eight speed automatic are standard. 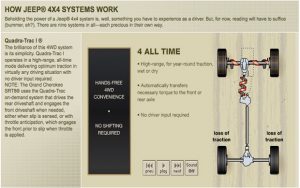 Uniquely among its rivals, the GC is available with several 4WD systems, Quadra-Trac I, Quadra-Trac II and Quadra-Drive II. The lighter-duty Quadra-Trac works like AWD, routing power front to back as needed – but unlike most AWD systems is rear-drive-biased and features auto-decoupling (all of the engine’s power is sent to the rear wheels if no slip is detected). The Quadra-Drive II system boasts a 47.4:1 crawl ratio in 4WD Low.

The Explorer also offers 4WD – but just one type and without available Low range gearing.

The Toyota 4Runner – the other real-deal SUV in the class – does offer Low range gearing but nothing more under the hood than a 270 horsepower V6 (for $37,305 to start). The 4Runner is a superb off-roader and has a gold-plated reputation for being as reliable as a farmer’s anvil – but it’s also among the slowest and gas-hungriest SUVs you can still buy new, maxing out at 19 MPG . . . on the highway.

To put this in some context, the GC’s available 5.7 liter V8 makes 357 horsepower and still manages to rate 22 MPG on the highway – with 4WD (standard with the big engine). It’s also much quicker, getting to 60 in about 6.8 seconds, vs. 7.7 seconds for the smaller-engined 4Runner. 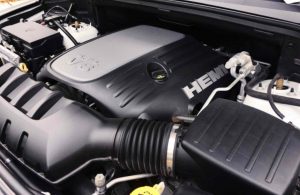 Ford’s Explorer is the hot-shoe of the bunch, though – notwithstanding its standard 2.3 liter engine is a tiny for a vehicle this size. And because it has such a little engine, it uses the least fuel – by far – of these three SUVs, managing 27 on the highway. Equipped with the 400 horsepower (and 415 ft.-lbs. of torque) turbocharged 3.0 liter V6, the Explorer can get to 60 MPH in the low five second range – the quickest time in the class – while still returning 26 MPG on the highway.

But, the Ford is less capable off-road and in severe weather on road, such as the deep snow that’s piling up outside my window as I type this review up – because it isn’t available with the deep crawl ratio/leverage advantage of a two-speed transfer case.

It also cannot pull nearly as much.

The GC – equipped with the V8 – has a max tow rating of 7,200 lbs. To be able to pull more, you’d need to go up a size to something full-sized, Like a Chevy Tahoe or Ford Expedition. 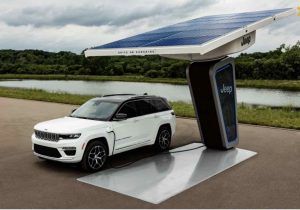 In a couple of months, GC buyers will also have that 4xe plug-in hybrid option to consider. It pairs a turbocharged 2.0 liter engine with a 400 volt battery pack and two electric motors. All together, the combo is expected to produce 375 horsepower and 470 ft.-lbs. of torque – making it the new GC’s most powerful and fuel efficient drivetrain option now that the Trackhawk is gone.

When it snows – really snows, as it did during the week I was test driving the GC – you come to appreciate having an SUV with 4WD and Low range gearing in the driveway, as opposed to a FWD/AWD crossover. Eight inches of unplowed drift didn’t faze the GC anymore than a vertical cinderblock wall presents an impediment to the upward travel of a skink. 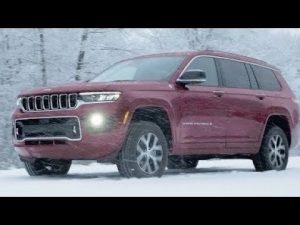 The GC’s snow-fording capabilities can be further augmented by specifying the available  Quadra-Lift air suspension, which lifts the rig on command, via a toggle switch on the center console – increasing the available underbody clearance to 11.3 inches.

If you get stuck, it’s probably not the Jeep’s fault.

Aside from its real-deal capabilities – rare in a segment dominated by crossovers that look like SUVs – the thing that sets this Jeep apart is its last-of-the-Mohicans V6 and V8 powertrains. The standard V6 may not have turbo-boosted low-end torque, as the Ford Explorer’s stronger-feeling 2.3 liter turbo’d four does. But it also hasn’t got the turbo. Or the ten speed automatic.

Which would you rather have ten or twelve years from now? 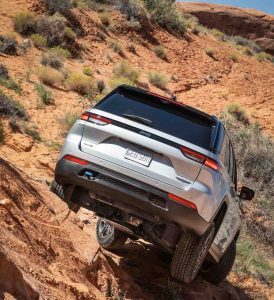 And how about that V8?

It’s the last call, probably. Jeep’s parent company, Stellantis, has already indicated this engine will soon be walking the Green Mile, with an EPA bureaucrat saying dead man walking behind it.

This is terribly sad.

However much horsepower multi-turbo’d V6s whelp up – however much torque electric motors deliver – there is no replacement for the reassuring rumble of eight coffee-can-sized pistons syncopating in their cylinders, the rage-against-the-dying-of-the-light that comes online somewhere past 6,000 RPM, wide open.

Does it suck a lot of gas? The proper question is – does it suck? And the answer is affirmatively opposite. You pay more for gas – on purpose – as the price of the pleasure.  Besides which – again – no turbo. Which means less pressure on critical internals. Which probably means fewer problems, ten or twelve years from now.

Maybe sooner than that. 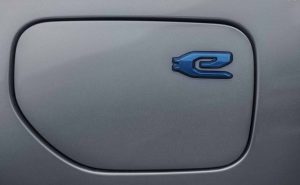 The pending plug-in hybrid drivetrain is an interesting counterpoint. Now that the supercharged 707 horsepower V8 (from the Hellcat Charger/Challenger) is no longer available, it will assume Top Dog status as the GC’s most powerful drivetrain option.

It won’t have the most range, however.

Jeep says the 4xe will be able to travel about 440 highway miles (25 on battery power), which isn’t as far as the 506 highway miles the V8 powered GC can travel (on 23 gallons of fuel). 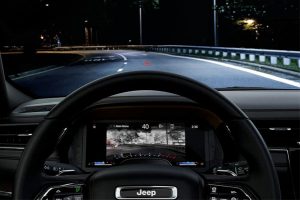 However, the V8 GC has to burn gas to travel any miles, at all. Theoretically, the 4xe could burn next to no gas, at all – if your trip there is 25 miles or less and even if it’s not, you’ll only be burning gas after you’ve burned through your 25 miles of range on battery power.

And the plug-in hybrid doesn’t have to stop when it exhausts its 25 mile range on battery power alone.

With a plug-in, you have a cord.

But (unlike an EV) you’re not tethered to it. 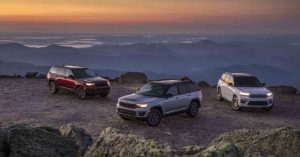 The new GC is slightly longer (193.5 inches) than its predecessor (189.8 inches) and slightly more roomy. Jeep says a bag of golf clubs can be fit inside the rear cargo area sideways now. But these differences are hard to tell if you don’t look closely.

The obvious differences are right in front of you.

Especially if you’re the front seat passenger, who faces his own independently operating LCD touchscreen – something only one other SUV (the GC’s big brother, the Grand Wagoneer)offers at the moment. It is part of the available Entertainment Group, which also includes individual touch screens for the backseat occupants. These can be used to Fire-stream movies from any of the services you have at home, such as Hulu, Prime and YouTube. 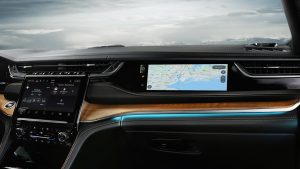 Trackhawk models get additional closed-circuit camera feeds for the wheels – so you can see where they are in relation to obstacles off-roading, without having to get out to have a look.

Infra-red night vision is available, too.

Plus those massaging seats – including a “rock crawl” mode, right up your spine.

Jeep went all-in on the luxuries, putting a Grand Canyon of distance between the Grand Cherokee and the very capable but very spartan in comparison 4Runner and the not-as-capable Ford Explorer. 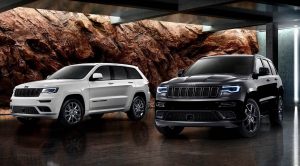 But not this nice.

And nice as it is, it’s not the hot ticket for eight inches of unplowed drift.

If you need three rows of seats, Jeep has you covered. The GC is also available in “L” (long wheelbase) form – with the extra room for an extra row. And if you don’t want all the latest stuff, thanks very much, you can still get last year’s GC, brand-new.

And if you need something a little bigger – with three rows standard and the same V6 and V8 engine choices (plus the choice of one more – even bigger – V8) there’s the Jeep’s shared platform cousin, the Dodge Durango.