Speed, it is said, is a question of money. How fast do you want to go?

Well, how about looks?

Audi’s A7 is a much more dramatic looking car than the A6 sedan it’s related to. It has “coupe-like” styling, including a more rakish windshield and lower roofline.

It’s also about $15k-to-start more expensive than the A6.

How good do you want to look? 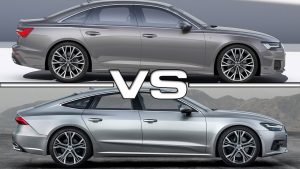 The A7 is a mid-sized luxury-sport sedan (styled Sportback by Audi) related to the Audi A6 sedan. Both are about the same overall size – but the A7 has a sleeker profile – at the cost of a little front and rear headroom. This is offset by its significantly increased cargo capacity – which it has because it hasn’t got a trunk, like the A6 sedan. Instead, it has a hatchback rear opening, which increases the available cargo-carrying space from 13.7 cubic feet (in the A6) to 21.6 cubic feet.

This makes it a more practical – as well as more dramatic-looking – car.

It’s also a more expensive one. 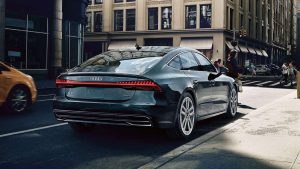 But it doesn’t come standard with the V6 (a smaller, less powerful turbocharged four cylinder engine is what you get as it comes) or the head-turning quotient of its stylish A7 relation.

It also comes standard with the turbocharged V6 and AWD but you can swap out the V6 for a plug-in hybrid drivetrain that ups the power – and gives you about 26 miles of range on battery power alone.

The big update for this model year is a larger – and now standard – digital instrument cluster for the base trim and an available 21 inch wheel/tire package. Rear side-impact airbags are also standard equipment in all A7 trims.

Practicality to go with the looks.

Sleek roofline cuts down on headroom a bit.

You can get the same V6 for much less in the A6. 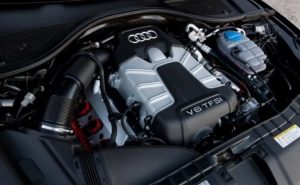 Unlike its A6 sibling – which comes standard with a four – the A7 comes standard with a V6. The 3.0 liter engine is turbocharged and paired with a belt-driven generator-starter system that quietly and quickly cycles the engine off when it’s not needed, to save gas (and reduce the output of carbon dioxide gasses, which all car companies are under regulatory pressure to reduce).

Output is 335 horsepower and 369 ft.-lbs. of torque – enough to get the A7 to 60 in 4.9 seconds. A seven-speed dual clutch automatic transmission and all-wheel-drive are standard. Gas mileage with this combination is 21 city, 30 highway – with a highway range on a full tank of 579 miles.

If you’d like to be able to drive about 26 miles without burning any gas, Audi offers the A7 with a plug-in drivetrain that combines a version of the 2.0 liter turbocharged four that’s standard in the A6 with a  battery pack/electric drive that’s strong enough to propel the car on its own for about that far, assuming a full charge.

In addition to that, you also get a bump in total output to 362 horsepower – but in spite of that gain in power, the considerably heavier plug-in is slower. It takes about 5.7 seconds to get to 60. This model also comes standard with the seven-speed automatic and Quattro AWD.

An interesting thing about the hybrid is its reduced highway range – not because it’s thirstier, but because it has a smaller 13.7 gallon capacity gas tank vs. the 19.3 gallons for the non-hybrid. Even though the hybrid averages about 3 MPG better than the non-hybrid – 27 vs. 24 MPG – the sacrifice of six gallons of tank capacity results in the hybrid’s gas-burning range being only about 370 miles – on the highway, where the gas engine is generally going to be running most of time – in order to keep the A7 moving. 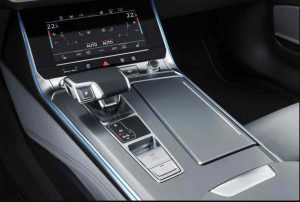 The extra six gallons the non-hybrid carries gives it an extra 144 miles of range vs. the hybrid.

This can be compensated for – if a lot of your driving is within the hybrid’s 26 mile radius of action on a full charge. In part because the cost of the plug-in hybrid isn’t all that much – a $1,550 option. On the downside, this option is only available with the Premium Plus and top-of-the-line Prestige trims, both of which are several thousand dollars more costly than the base Premium trim – which comes only with the V6 drivetrain.

The V6 A7 has the auctoritas – as the Romans once styled it – that’s absent in the four cylinder iteration of its A6 sibling. What’s meant by that is not merely the prestige that comes with having an engine that’s bigger than the engines that come in common cars – in economy cars – but also the power and performance that you have a right to expect when you just spent nearly $70k for your new car. 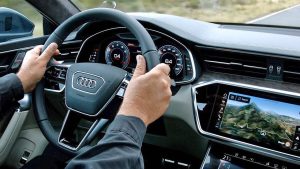 Something else you don’t get – with the A7 – is something you’ll be glad you didn’t.

The A7’s V6 does shut itself off regularly – and not just at red lights, as is becoming usual with most combustion-engined new cars as a way to lower what are styled “greenhouse gas emissions” – meaning, carbon dioxide. Without veering off the road into a rant about that, let’s leave it at the fact that everyone selling combustion-engined cars is scrambling to find ways to lower those “emissions.” The obvious and simplest way being to shut off the engine as often as possible.

A not-running engine doesn’t “emit” anything.

The problem is the driver can feel and hear the engine shutting off – and being turned back on – when the off-and-on’ing – is done by the crude means of automatic stop-start (ASS) “technology.” Which is nothing more elaborate than shutting off the engine at every red light and then using the starter motor to start it up again.

As Inspector Clouseau once said – not anymore. 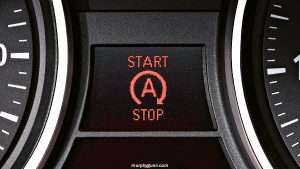 ASS uses the same starter and battery that starts the car at start-up to start it again. And over and over, again. You hear and feel every stop-start cycle.

This Audi’s engine also shuts off and turns back on – but without the abrupt and obvious sounds and sensations. Instead of a small 12 volt starter motor not designed for such duty, the re-starts are handled by a belt-driven starter powered by a 48 volt electrical system, which spins the engine back to life almost instantaneously. This happens throughout the course of your drive, without interrupting the peace and quiet of your drive. 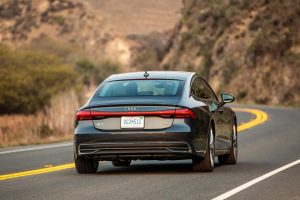 The A7’s handling is tenaciously neutral – a function of its standard all-wheel-drive. Rivals like the Mercedes-Benz CLS come standard with rear-drive (AWD is optional) but the differences are much less pronounced than they once were – unless you’re really pushing it. The main accessible difference is the total absence of wheel-slip in the A7. If you disable the traction control in the RWD version of the Benz and stand on the gas while holding the brakes you can get the rear tires to spin.

You can’t do that in the AWD-only A7. 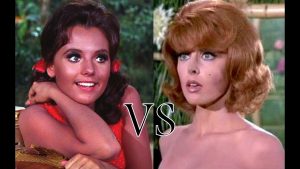 The look is what counts. Or rather, it’s what you pay extra for – vs. the A6. As you would to date Ginger vs. Mary Ann.

Both cars are about the same size – that being mid-sized. The A7 is slightly longer than the A6 (195.9 inches vs. 194.4) but the A7 is visually and actually much lower. The raked windshield tapers to a roofline that is 56 inches off the pavement vs 57.4 inches for the more formally-styled A6. 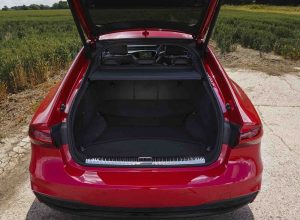 But it’s a small price to pay for the sake of style.

And it can also be made up for (up front) by lowering the seat to compensate. It can be a little tighter in the back of the A7, if you’re very tall – because you can’t lower the rear seats.

The really big difference –  beyond the looks – is what you can carry in the A7 vs. the A6. This being a function of the A7’s not being a sedan – with a trunk. Instead, there’s a hatchback, which opens up 21.6 cubic feet of cargo-carrying capacity vs. the 13.7 cubic feet inside the A6’s trunk.

The A7’s usable space is also greater because of the larger opening – which opens up the entire passenger compartment. The A7 is not exactly the ideal vehicle for carrying home a bundle of 2x4s from Lowes – but it’s doable. Just reverse the floor mats to the rubber side and drape the carpeted side over the leather-covered center console and other surfaces that might otherwise get marred by the 2x4s. 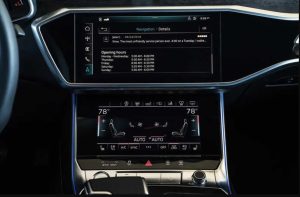 All trims now come standard with the fully LCD 12.3 inch primary gauge cluster that was previously found in the higher trims. There is also a 10.3 inch secondary LCD screen for the stereo/apps/vehicle systems – and a third touchscreen below it for the climate controls.

There are almost no physical controls in this car, aside from the gear selector lever. And of course, it doesn’t physically control anything, either. When you select a range, a signal is sent to the computer to engage it.

More than anything else, this is what defines a modern luxury car – because ordinary cars have become pretty luxurious. When every new car – including the humblest economy car – comes standard with AC (often, climate control AC) and power everything, what do you do to establish some separation between such cars and cars that cost three times as much? 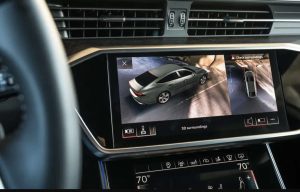 You add electronics – and technology.

The downside – if you’re selling luxury cars – is that electronics and technology get cheaper to install with each passing year. Within a few years, probably all cars – even the humblest economy cars – will also have LCD main gauge clusters, 3D cameras, ambient lighting and all the rest of it.

Heck, some of them already do.

Some interesting options include an available wireless charging pad with a signal booster (most in-car chargers just charge) and – for the top-of-the-line Prestige trim – driver and front seat passenger massaging chairs. All trims also come standard with Audi’s Connect system, which lets you monitor and even control certain car functions (such as the door locks) remotely, using an app on your smartphone. 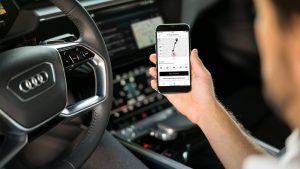 One odd omission – for a car with a base price of nearly $70k – is the absence of a standard heating steering wheel.

Can you put a price on good looks?