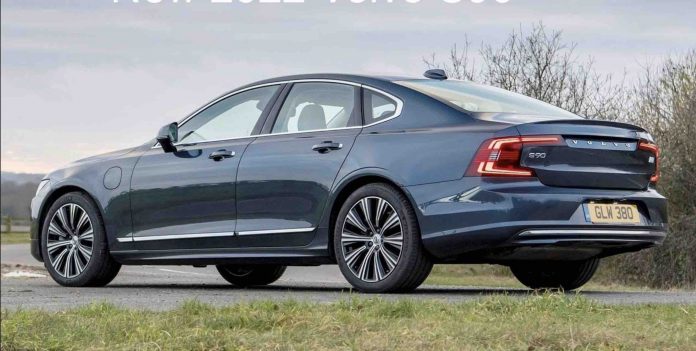 Most top-of-the-line luxury sedans are two things: Big – and pricey. Except for one big luxury sedan that’s not but which is often overlooked.

The S90 is Volvo’s largest, most luxurious sedan. It costs about the same as other luxury car makers’ smaller, mid-sized sedans.

Prices start at $51,850 for the Momentum trim, which is equipped with a 316 horsepower 2.0 liter four cylinder engine that’s turbocharged, supercharged  . . . and mild-hybridized. It’s also paired with standard all-wheel-drive, which is generally optional in rival sedans. 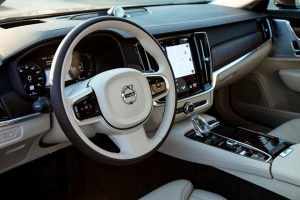 Plus several inches more backseat room than you get in the smaller, mid-sized Mercedes E-Class and BMW 5-Series sedans – which cost about the same.

The S90 also offers a 400 horsepower plug-in hybrid option that can travel about 21 miles on battery power before the gas engine kicks on to keep you going. It stickers for $60,050 with the Inscription  package, which includes the option to get massaging driver and front passenger seats, a 13 speaker Bowers & Wilkins ultra-premium audio system, automated self-parking and an adjustable air suspension.

The standard 2.0 liter engine is now paired with a 48 volt mild-hybrid system that (like other such systems found in rival sedans like the Benz E-Class sedan) cycles the gas engine off and on to increase gas mileage and lower the emissions of gasses (carbon dioxide, the inert gas that’s been made into a B movie villain bent on “changing” the “climate”). 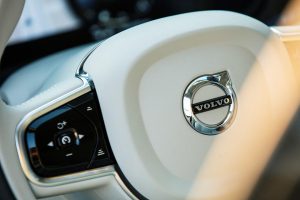 More size, room – and power – than the same money buys in something smaller, elsewhere.

Almost the same size – and comparable power (Inscription trim) as what you’d get in something larger, like a Benz S-Class, for about $40k less money.

Exceptionally comfortable seats, even without the optional massage.

Trunk isn’t big (13.5 cubic feet, about what you’d get in most compact-sized sedans).

Four cylinder engine is small, irrespective of the power it makes.

You could get a loaded Toyota Avalon – about the same size and with a stronger V6 – for about $10k less. 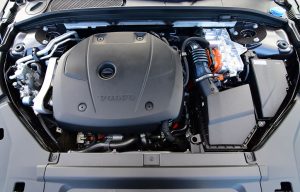 All S90s come standard with a 2.0 liter four cylinder engine, an engine type that is becoming a kind of Universal Engine, in all kinds of cars – not just luxury cars. The reason for this is that the size is just the right size to comport with the various government regs in force while also summoning enough power – when supplemented by turbo boost – to comport with the expectations of buyers.

The Volvo’s 2.0 engine differs from all the others in one way, however.

In addition to being turbocharged it is also supercharged. The reason for that being to eliminate – not just reduce – the lag you get with just a turbo. And the reason for that is turbos don’t produce boost pressure until exhaust pressure increases and that takes a moment, leading to the lag. You push down on the gas and then exhaust gasses are made – and boost produced. 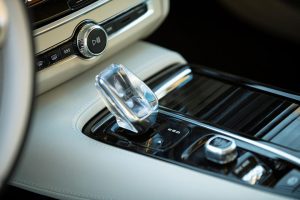 A supercharger does not rely on exhaust gas pressure to build boost. These devices are mechanically (or even electrically) powered and so build boost immediately. So why not use just a supercharger? Because superchargers – paradoxically – take a lot of power to power, whereas a turbo scavenges the free power of the engine’s spent exhaust gasses.

Volvo’s solution – to both problems – is to combine both things. The supercharger imparts immediate boost, eliminating the lag while the turbo maintains boost without the cost (of power) that relying on just a supercharger otherwise would. 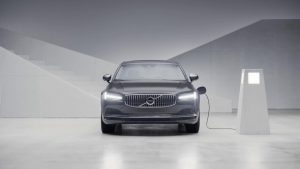 This being very competitive with the performance of smaller, mid-sized luxury sedans like the Mercedes E-Class, which also comes standard with a 2.0 liter four cylinder engine – but just 255 horsepower (for $56,750). You can get a stronger, 3.0 liter six/mild hybrid iteration and 362 horsepower in the Benz E . . . for $62,000.

Plus the ability to travel for about 21 miles on battery power, which the mild-hybrid E-Benz can’t do. 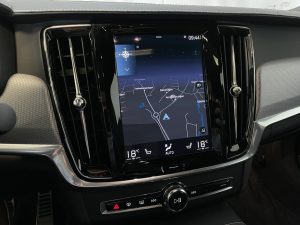 Equipped with the plug-in hybrid drivetrain, the Volvo stacks up pretty impressively against the full-sized Mercedes S-Class, which comes with the same basic 3.0 six/mild-hybrid drivetrain that’s optional in the mid-sized Benz E, tuned up to 429 horsepower. But it’s not quicker than the Volvo – due to being heavier.

The same price-performance scheme elaborates when you compare the Volvo with the mid-and-full-size versions of BMW’s sedans, the 5 and 7 Series. Also the Audi A6 and A8.

The S90 is the bargain of the bunch, offering more standard power in a roomier car for less than its rivals charge for smaller, less powerful cars. 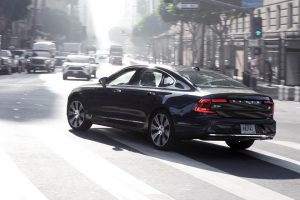 Performance is excellent with either of the S90’s available drivetrains, but it’s smoother with the standard (mild hybrid) drivetrain.

The turbo-supercharger set-up gives immediate – and smooth – power, without any hesitation or abruptness. The plug-in hybrid set-up is also usually smooth but under sudden, WOT throttle input, there’s sometimes a moment of apparent confusion as the electronics decide which parts of the hybrid drivetrain to engage – and how much. This being due to the 400-horse plug-in version being more reliant on the power delivered by its battery/motor side to propel the car forward.

The mild-hybrid iteration relies almost entirely on its turbo-supercharged gas engine for propulsion, relying on the 48 volt/mild-hybrid part of the drivetrain chiefly for seamless re-starts when engine power is needed after a period of coasting. This system is almost unnoticeable, which is its great virtue and the chief reason for it as otherwise, there would be noticeable – recurrent – stop/start cycling (as in less cars without the 48 volt mild-hybrid system but with the obnoxious “stop/start technology,” as it’s usually advertised).

Both versions are more luxurious (i.e., comfortable) rather than sporty – as is true of other sedans on either end of the size spectrum in this class. It was once-upon-a-time the case that some of cars in this class – like the BMW 5 sedan – were four door sports cars. Some even had manual transmissions.

None of them do, anymore.

Most do have or offer some type of “active” (i.e., adjustable) suspension and various driver-selectable driving modes that alter the shift points/feel of the automatic transmission and make the throttle more sensitive to driver inputs. All of them come with pretty aggressive “sport” tires with thin sidewalls, too. But they’ve returned their big cruiser origins, even if they do have sport buckets and strike a sporty pose. 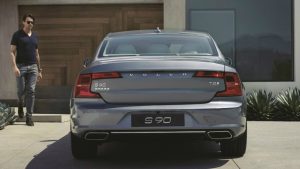 The Volvo differs in being noticeably less sporty than its primary rivals – and that’s a pleasant thing. It has sport buckets, too – but they’re the kind you’ll wish you could take out of the car and place in your TV room. They are a great place to relax – and that is fundamentally what this car is all about. Its speed is an adjunct of that – as it is uncomfortable to drive a car that lacks the power to just whisk you away from whatever you don’t want to be near anymore.

It’s not going to hang with a Caterham Super 7 in the curves – but you’ll glad it’s not a Super 7 when traffic sucks and all you want to do is  . . . relax until you get home. 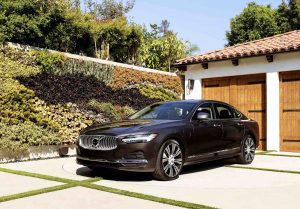 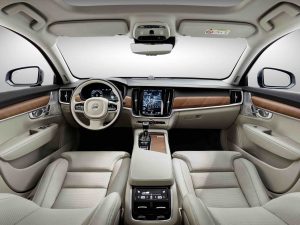 On the other end of the spectrum, a Mercedes S-Class sedan is 208.2 inches long overall and offers 44 inches of legroom for backseat passengers – as it should, for $109,800. The BMW 7 sedan is similarly sizable (207.4 inches) and spacious (44.4 inches of rearseat legroom) but it’s also a pricey proposition at nearly $90k to start (equipped with AWD, optional in this model; standard in the S90).

Also standard in the Volvo is the au currant digital/configurable dashboard layout that the others in this spectrum also come come standard with, plus a 9 inch secondary LCD touchscreen, leather seats and a panorama sunroof. Things like four-zone climate control, power side shades, rear seat heaters and an excellent 13 speaker Bowers & Wilkins ultra-premium audio rig are available – along with those massaging driver and front passenger seats mentioned earlier. 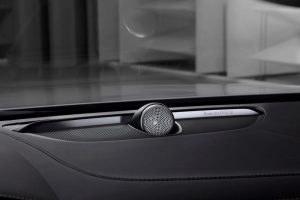 Two things are lacking here, one of them subjective..

The objective deficit is this big car’s small trunk. Just 13.5 cubic feet, which is about the same size trunk as you’d get if you were to buy a typical compact-sized sedan. It’s usually big enough. But it might be not enough if you – and three passengers – go for a road trip and need a place to put all their stuff. 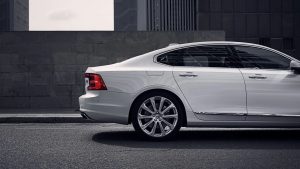 Subjectively, the Volvo isn’t as recognizable as a status car. Which for some people will be the opposite of a deficit. Volvo has become kind of like what Buick was, once – a luxurious car – like a Cadillac – without flaunting it.

If you prefer a lower profile luxury sedan – and like paying less for more – you might want to have a look at this Volvo.