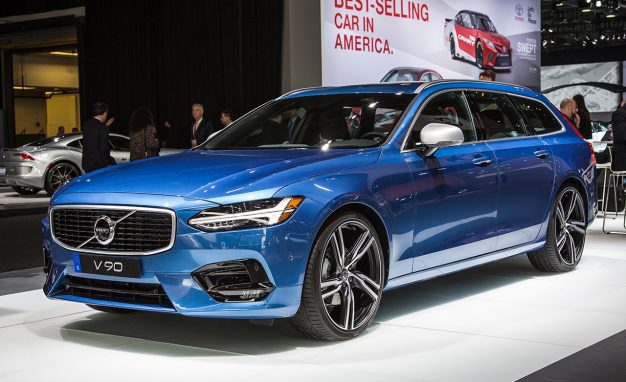 Volvo and wagons used to be synonymous.

They may soon be again.

Introduced at the Detroit auto show last week, the 2018 Volvo V90 wagon harkens back to Volvo’s roots as a car company that specialized in … wagons.

“Volvo is wagons,” said Lex Kerssemakers, CEO of Volvo Car USA. “And theoretically, wagons should start to increase in popularity if you look at the demographics.”

The sporty design is meant to compete with the Mercedes-Benz E-class wagon and other high-end wagons, such as those made by Audi. The V90 will be equipped with Volvo’s semiautonomous Pilot Assist technology and Apple CarPlay.

But it will be fighting an uphill battle as it enters a U.S. industry dominated by SUVs and crossovers, said Dave Sullivan, an analyst at AutoPacific.

“It doesn’t matter what flavor they offer it in, wagons are a really tough sale,” Sullivan said.

Though a market exists for wagons, it is “smaller than a sliver,” he said. Such customers are typically luxury buyers who are looking for greater size and performance without opting for a “mom-mobile” SUV or crossover.

“We think the wagon is high-potential in the U.S., but it will not kick off immediately,”Kerssemakers said.

In September, Kent Falck, director of the V90, told the trade publication Automotive News that he expects 40,000 annual global sales. Global sales of the V60 wagon and the V60 Cross Country for 2016 were 42,236 and 18,401. He added that the automaker is anticipating demand for the V90 and recently introduced S90 sedan to put some strain on supply.

“It is a very positive problem to have,” Falck said.

Volvo has experienced steady growth in the U.S. since it was acquired by Chinese company Geely in 2010. Sullivan said there won’t be much risk to the automaker if the V90 fails to gain traction in the U.S. given the success of the XC90 SUV and the steady rate of product introductions.

“This is a great time to be at Volvo,” he said.

The U.S. introduction of the V90 also marks an expansion of Volvo’s custom-order model, which launched in Europe and began with lower-volume models. The V90 will not be available straight from dealer inventory, but must be ordered online or through a retailer for pickup at dealerships.

Kerssemakers stressed that Volvo is not moving toward a direct-sale model, but hopes to relieve inventory backup with the new program.

Sullivan said the custom-order model will benefit retailers and isn’t likely to put off the automaker’s luxury customers.