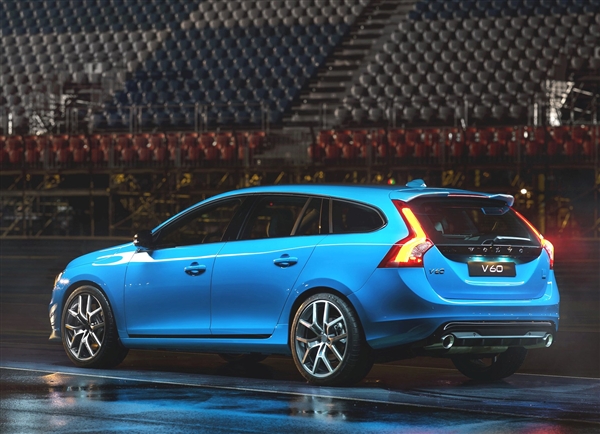 For the past several years, Volvo has been trying hard to sell American buyers other-than-wagons  . . . models like the snarky C30 hatchback, the C70 convertible and the S80 lux sedan . . . without much success. 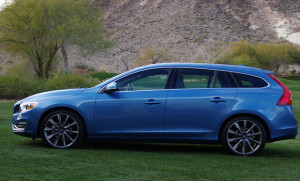 Meanwhile, other prestige badge Euro brands like Mercedes and Audi have been trying hard to sell Americans on wagons . . . without much success.

Wagons are popular in Europe . . . not so much over here.

And now Volvo’s returning to wagons. Because – cue Dr. Evil voice – it’s what they (Volvo) do.

But though the 2015 V60 is a wagon, it is probably the most un-Volvo wagon the Swedish automaker has ever offered as a mass-market model. 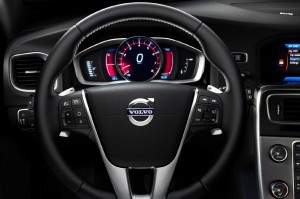 Whether that will sell in the land of We Don’t Like Wagons Much is the question at hand.

It’s also very much a sporty wagon – and not a crossover wagon like the current XC70. There’s no body-cladding and no pretensions to off-road capability. It sits low – and has a low, swept-back roofline made to look all the more radical via downward tapering side glass. That makes it much less hausefrau-esque than traditional Volvo wagons, but it also means the V60 has a bit less head, leg and cargo-room than you might expect in a mid-sized wagon. Still, it’s got a lot more interior real estate than a mid-sized sedan – without the dowdiness of a traditional kid-carter/mom-mobile.

And unlike most of its competitors, it’s also got the power/performance to run with mid-sized sport sedans. That’s a pretty cool concept. 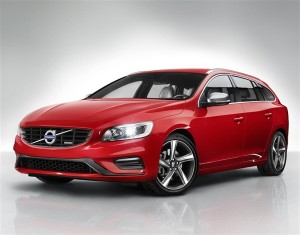 This version of the V60 is front-wheel-drive-only.

A T5 powered by a larger 2.5 liter in-line five-cylinder engine paired with a six-speed automatic lists for $36,800. This version comes only with AWD.

There is also a high-performance T6 R-Design variant. It gets a turbocharged in-line six and 325 hp. It’s also AWD-only. 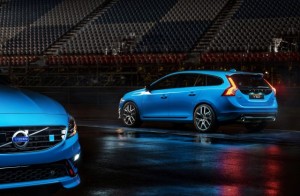 The Acura costs less – $31,985 to start – and it’s slightly larger outside and in. But it only comes with a non-turbo (and non-powerful) four cylinder engine – and only in FWD form. The BMW wagon, on the other hand, comes standard with xDrive AWD and offers diesel power. But it costs much more to start($41,450) than the V60 and it doesn’t offer a high-performance engine option.

There is also the Mercedes E-Class wagon – one of the very few prestige brand wagons still sold in the United States. It comes standard with AWD – and a big V-6, with a V-8 available. However, the Benz is a much bigger car  – almost full-size – and its base price of $58,600 ($23,300 higher than the T5’s base price) puts it another orbit altogether.

It’s already available in Europe – a market where sporty wagons are as popular as sporty sedans are here. 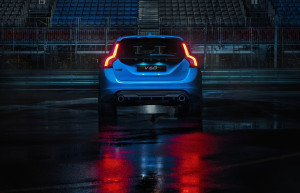 A pretty solid deal compared with the pricey BMW 3 wagon. 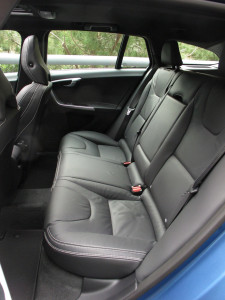 Excellent 2.0 engine/eight-speed automatic only available in base trim – and only with FWD.

Would be a lot more fun with a manual transmission – but Volvo doesn’t offer one.

AWD and T6 versions are porcine at the pump: mid-low 20s, average vs. mid-high 30s, average, for diesel-powered BMW.

Tight back seat (less legroom than either BMW 3 wagon or TSX wagon).

Previous Volvos came with in-line fives – and sixes. Some still do – including the V60. But these larger engines are optional now.

Reason? They’re thirstier. Too thirsty, probably, for modern political – and economic – conditions. More on that in a minute. 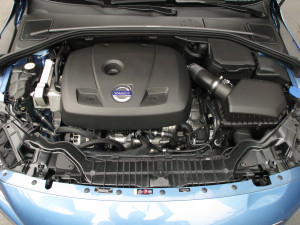 But because the Volvo is lighter  – and FWD – it out-performs and out-MPGs the BMW.

BMW does offer a diesel, if mileage-uber-alles is your primary desire. So equipped, the 3 wagon rates 31 city, 43 highway – tops in the segment. But, the diesel doesn’t come cheap to buy: $42,950 – $7,650 more than the price of the turbo 2.0 equipped V60 – which is also substantially quicker than the frugal but less athletic BMW oil burner. Keep in mind, too, that diesel fuel costs about 50 cents more per gallon than regular unleaded – negating much of the diesel’s over-the-road mileage merits. 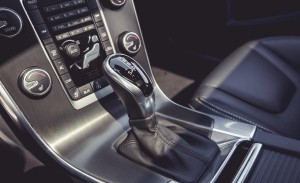 Now you know why Volvo made this engine the V60’s optional engine.

I expect it will soon be a retired engine.

Part of the reason for the in-line five’s  not-so-great EPA numbers is the not-so-au-currant six-speed automatic that it’s paired with. Though the V60 is new, the 2.5/six-speed combo is a carryover; basically, it’s the same combo used in 2013 (and 2012 and 2011) Volvos. And it shows. It’s not a bad drivetrain. It’s just not better than the new Drive-E four engine – which, remember, is the less expensive-to-buy engine.

And the better-performing engine.

One wonders – well, I wonder – why Volvo didn’t just retire the five, offer AWD with the turbo 2.0 – and be done with it. 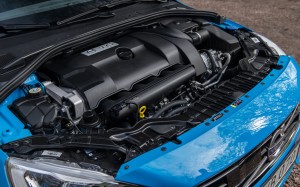 AWD is standard, too.

This combo is pretty unique in this class. If you want a wagon with muscle car hustle, your choices are pretty few – especially under $45k.

The V60 R-Line could be just the ticket.

And if you’re really looking to get a ticket, there is one more option: The Polestar version of the V60.

Polestar is to Volvo what M is to BMW. Hot-rodded versions of the bread-and-butter stuff. In this case, the V60 is tuned up to 345 hp and jumps to 60 in just 4.7 seconds, with a top speed of 155 MPH. The downside is just 120 of them will be shipped here. 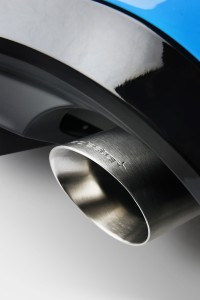 That’ll make ’em very rare, hard to find – and expensive if you do manage to find one.  Still it’s cool that Volvo is making such animals. They just need to get the word out – because unlike BMW’s M cars or the AMG bruisers purveyed by Mercedes-Benz, almost no one outside of the car biz has ever heard of Polestar.

And that’s a shame.

The V60 with the new turbo four is much quicker and – the Big Deal – much more economical than any previous Volvo wagon. It pulls strongly – without pulling dollars out of your wallet every time you do.

But is that what American wagon buyers want? I don’t mean the economy part.

In Europe, there is no disconnect between “wagon” and “sporty.” In America, there is. There are sporty sedans. And there are wagons – which tend to be regarded as more utilitarian. Which of course, they are. You can carry stuff in addition to the people. But because Americans – for whatever reason – view wagons as utilitarian, the companies that sell them (if they sell them at all) tend to offer more pedestrian powerplants and softer suspensions in their wagons. Even when peppier powerplants and more sporting suspension packages are offered in the sedan versions of the same basic vehicle. The BMW 3 sedan vs. the BMW 3 wagon is a good example. The 3 sedan can be equipped with a high-powered twin turbo six; the wagon only gets the middling powerful turbo four. Or the economy-minded turbo diesel. 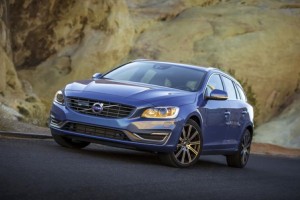 Because this is what people – American people – seem to want in a wagon.

And that could be a problem for Volvo.

The V60 T5 2.0 is speedy – and it’s got game in the corners, too – due to fairly stiff suspension settings and those handsome low-profile tires. The T6, even more so – because it’s set up to be even speedier. Enthusiasts will dig it – but are there enough of them out there?

The V60 looks great – and runs hard – but I think it would sell great if it offered the excellent 2.0 engine/eight-speed transmission with AWD (and close to 40 MPG on the highway) rather than zero to 60 in six seconds, but FWD-only.

It’s not another box on wheels – and there’s no body cladding.

Volvo worked hard to sex up the silhouette of its latest wagon – and succeeded. The lines are fine. However – and of a piece with the drivetrain Catch-22s discussed above – there are some functional downsides to the aesthetic upsides.

That slick-sloping roofline? It results in less headroom inside. The BMW 3 wagon has 40.4 inches up front and 38.4 in the second row. The swoopier V60? 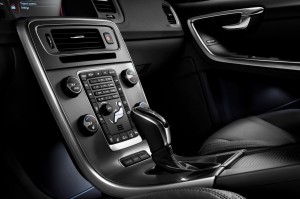 Legroom is another issue. Just 33.5 inches in the second row. That’s tight. It’s actually less legroom than in several current-year compact-sized economy sedans – and the V60 is a mid-sized wagon.

Beauty has its price.

Is it one American buyers will be willing to pay? 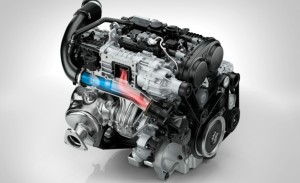 The Drive-E thing is not a gimmick or an advertising con. The little 2.0 engine makes big power in the V60 – and Volvo offers even more power in the S60, which can be ordered with a turbo-supercharged version of the 2.0 engine. There is a supercharger for immediate/low-end boost, with the turbo kicking in around 3,500 RPM and taking it from there. No lag or flat spots in the power curve – and 302 hp (and 295 ft.-lbs. of torque). Unfortunately, the turbo-supercharged version of the 2.0 engine is not offered – yet – in the V60 wagon.

Here’s to hoping it will be.

The Drive-E system includes an Eco mode that lets the engine freewheel during coasting – eliminating the drag of engine braking, just as if you’d put the transmission gear selector in neutral (or pushed in the clutch, in a manual-equipped car). There is also a regenerative braking feature – borrowed from hybrids. And automatic engine stop/start. The engine cuts off when the vehicle is stationary, as when waiting at a red light. When the light goes green and the driver takes his foot off the brake, the engine re-starts and off you go. 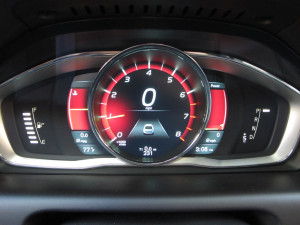 These are among the tweaks used to get the T5 close to the 40 MPG mark on the highway.

The entire dash is LCD – with a chronometer-themed speedometer ringed by a tachometer and bar graph displays on either flank, one for power vs. economy (basically, a high-tech engine vacuum gauge) the other to show you fuel level. It is slick-looking and easy to read. Sometimes, the two do not go together. In this case, they do.

Off to your right is a “floating” (and ultra-thin) center stack, with a storage cubby located behind it. The look is cool but the cubby is a bit awkward to access. Most of the major controls are grouped together on the stack, keypad style. Up above this is an LCD display – through which you can operate the optional Sensus touch screen telematics.

Being a Volvo, the V60 is a tour-de-force of safety features – including a Pedestrian/Cyclist Detection system that will automatically stop the car (assuming you don’t) if a spandexer or iPhone-addled walker weaves into your path. It works at speeds up to 31 MPH.

Heaters for the rear seats – as well as a heated steering wheel – are among the notable luxury options. 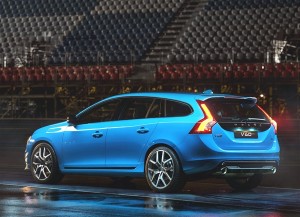 Volvo’s rolled the dice on this one. Ballsy. They might clean up – or get cleaned out. I hope it’s the former. Sportwagons are cool. Like a really good-looking girl who has a brain to go with it.

If only more American buyers could see it.