Volvo translates from the Swedish (roughly) as I roll. Not rock and roll. The company is known for building conservative, sensible shoes cars – not saucy cars. 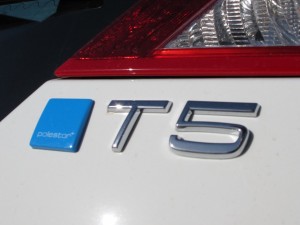 So what to make of the C30 Polestar?

It’s a factory made (well, dealer-tuned) higher-performance version of Volvo’s sporty C30 hatchback – packing 250 hp vs. the regular C30’s 227. It’s not a rabid wolverine like an M-tuned BMW or an AMG Mercedes. But it also doesn’t cost $60k, as those cars do. And therein lies the charm. This Volvo has the upmarket cachet of a premium brand – giving it a leg up, status-wise, over similar-performing hot hatches like the MazdaSpeed3 – and enough performance to outclass the only ballpark-priced competitor it has that’s comparably euro-lux: VW’s GTI and Golf R.

Polestar equipped C30s have had their computers reprogrammed to increase the amount of turbo boost fed to the five-cylinder engine, along with more aggressive throttle response.

The Polestar enhancements, along with Bluetooth streaming and new-design LED headlights, constitute the major changes for the 2012 model year. 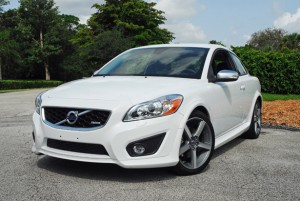 The C30 is a deal. It’s the only premium-brand sport coupe you can buy for under $25k – and a top-of-the-line R Design with the Polestar upgrades can be had for under $30k – about $4k less than a VW Golf R.

Polestar = sleeper. No one expects a Volvo to be quick. Have fun messing with BMWs and Audis.

Your back will love the seats.

Clutch take-up can be a bit abrupt.

Pop-up nav system – you’re better off with an aftermarket Garmin.

Back seats area is spacious but awkward to access. 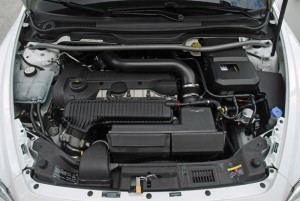 All C30s are powered by a 2.5 liter, in-line five cylinder engine. But Polestar-modded versions up the ante to 250 hp from the standard car’s 227. This is enough extra juice to get the C30 to 60 in about six seconds – much quicker than the only other car that’s roughly similar in terms of price, general layout and Euro-lux brand cachet – the VW GTI.

It’d be reasonable to expect the Polestar-modded C30 to drink more gas than the regular C30, but it doesn’t. The more potent Polestar-tuned engine returns the same 21 city/29 highway as the run-of-the-mill C30. A Lexus CT200 hatch will beat this by more than 10 MPG – but the hybrid hatch Lexus also needs more than 10 seconds to lug itself to 60 MPH. 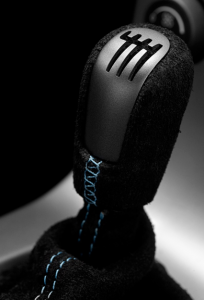 Another nice surprise, C30-wise, is the standard six-speed manual transmission – a rare thing for a Volvo.

You can also order a six-speed automatic if you prefer – but the fact that a clutch is available at all is pretty cool.

Swedes are quiet, orderly people, generally – but that Viking berserker DNA is still there. The C30 is very Swedish in this respect. It does not look particularly aggressive; it does not even have a boost gauge to monitor the doings of the turbocharger under its hood – let alone a gnarly vacuum cleaner hood scoop like an overtly obstreperous MazdaSpeed3. Nor does the turbo boost come on like a sudden thunderstorm, ripping tread off the front tires as they try to maintain their grip on the pavement – as in the 263 hp Speed3.

Yet, it’s quicker than the Speed3 and walks away from the also-peakier GTI and Golf R.

But another element is how the power is produced. No, make that when. The C30’s five-cylinder turbo engine makes peak torque at just  1,500 RPM. In contrast, the Speed3’s similarly powerful turbocharged four-cylinder engine doesn’t produce its peak torque until 3,000 RPM. The Golf R’s torque peak is lower – 2,400 RPM- but still way up there relative to the Volvo’s.

What this means on the street is more immediate acceleration – with much less drama. It is not necessary to rev the engine much to get a reaction – very much unlike the Speed3 (and the VW, though to a lesser extent). You can stay in fifth and still pull an efficient pass at 50-60 MPH. No need to grab fourth in order to up the revs – and get some action from the boiler room. And coming off the line – even coming off the line WOT – there’s no herky-jerky torque steer caused by sudden power spikes. The car just… goes. 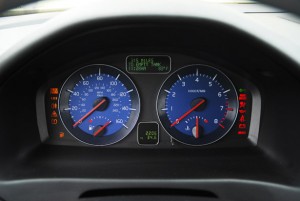 This is both a pro and con, though – depending on your outlook.

The Speed3 is a firecracker – even if it’s not the speediest thing going – because it feels speedy. The blitzkreig surge of high-pressure boost  hits you in the face – or rather, in the small of the back – as the car literally lunges forward, tires squealing – and jerking, left-right, as they try to cope with the sudden onrush of turbo-boosted hp.

The C30 is much calmer in its application of acceleration. It does not feel – or even sound – like a turbo engine. It feels – and sounds – like a naturally aspirated, larger-displacement engine. You’d swear there’s a V-6 around three liters under the hood – not a tiny five of just 2.5 liters, huffing force-fed atmosphere and fuel. This was in fact Volvo’s specific objective – the seamless feel of a powerful V-6, when the power of a big V-6 is wanted – with the fuel economy of a four when the power of a big V-6  is not needed.  It is thus a very composed and comfortable engine to partner up with. If you want sturm und drang, this one’s not for you, though. In fact, the only thing remotely touchy about the C30 Polestar is the clutch take-up, which is minimal and so the engagement’s sometimes a little abrupt – or at least, was minimal and sometimes abrupt in my press test car. That might be the result of  previous hard-driving by the gaggle of auto journalists who got the car before me.

You’re going to have to try that for yourself and see.

The handling is a little soft for a “tuner” car – much softer than the Speed3 and Golf R, which have near zero give but as a result simply do not lean when you put them through a corner at Ludicrous Speed. But, again, this is a matter of one’s perspective. The C30’s ride is lux-plush. Even the tested R-Design model with the Polestar stuff. It has firmer (by about 30 percent) suspension settings than the regular T5 and also rides on more aggressive 18 inch (vs. 17 inch in the T5) wheels. However, these eighteens are nowhere near as severe – as single-minded – as the now-current 19 and 20 inch wheel and tire packages that are to be found as elements of many high-performance “sport” packages. They – and the C30’s overall road manners – are aggressive enough to be fun. But not so aggressive that you get sick of the car after 30 minutes.

Especially if you’re over 30. 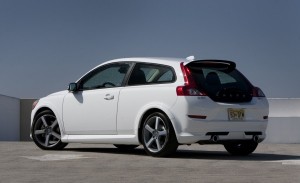 Four years out of the gate and the C30 still looks very current on the outside. Though technically a hatchback, the C30 is more kin to what they call in Europe a shooting brake – meaning, a fastback-ish sportwagon.

In the typical hatch, there’s not much happening behind the doors. The rear quarters are usually stubby, with most of the car forward of the B pillars. In the C, there’s still plenty of car left after the doors – this portion of the car forming a tunnel-shape that’s best seen from above. It tapers back for a good bit, ending at the notched-down rear gate/glass. Stylistically, it is a very interesting look that’s all the more interesting because of the subtlety of the look. You need to view the car from different angles to appreciate the different drummer-ness of the forms. Volvo did not just reach into the grab bag of performance car cliches and fit pontoon fenders, wings and air foils to the thing.

And you will probably like the excellent all-around visibility. This is another unusual in a performance-minded car. Just last week I had a Mini Cooper Coupe and the thing was borderline dangerous due to the Stevie Wonder blindspots to either side created by the tag team of a chopped roof and keyhole-sized rear quarter glass. You took your life in your hands every time you pulled into a busy intersection. Though I am as far from being a Safety Nazi as President Obama is from being a Libertarian, being able to see where you’re going – and what’s going on around you – is a good thing. And the C30 is very good at that. 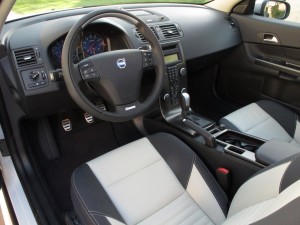 Inside, it’s Volvo typical: Tasteful – and restrained. Nothing flashy. Just classy. Detail touches include a floating center stack that’s no thicker than an iPhone – and behind which there’s a handy (and out of sight) storage cubby. R-Design C30s get cobalt-blue gauge faces, brushed metal trim and handsome leather-stitched seats, which by the way are outstandingly supportive and comfortable at the same time. Everyone else may have caught up to Volvo on the safety front – but when it comes to seats, few if any can touch The Swede.

Final point: The C30 is much more practical than a car like the Speed3 or the VW Golf. It has usable back seats, for one – although it can be a bit gymnastic to get into (and out of) the back seats. This is a functional compromise of the two-door, two-plus-two layout. But Volvo makes the best of a not-ideal situation by adding a button on top of the front seats to electra-slide them forward. This is much easier on backseat occupants trying to escape than grubbing around for a low-floor mounted slide switch.

And, the backseat space does not come at the expense of cargo space behind the back seats – which is about 13 cubic feet, or (for some perspective) about 2 cubes more trunk space than you’d get in a BMW 3 coupe. The VW Golf and Speed3 Mazda have slightly more trunk/cargo capacity – but the back seats in these cars are much more cramped, rendering them effectively two-seaters. The C30 will honestly take four adult passengers.

Others have noted – and I will, too – that the Volvo’s technology suit – in particular, its optional GPS system – is out of date. Also clunky to use. It rises from the dash – via remote control – and involves too many fussy inputs to operate without first reading the manual and later, having memorized all that, too much of your attention while the vehicle is moving. I recommend skipping it – and if you want GPS, buy an aftermarket Garmin or similar unit instead. These cost only $500 or so – much less than the typical factory GPS – and unlike factory GPS, can be used in multiple cars, carried with you when you’re not in your car – and can be kept with you if you sell your car. 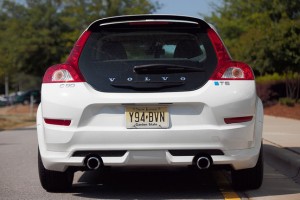 A six-speed, turbocharged Volvo that will smoke a GTI, match moves with a Speed3 – and costs $4k less than a Golf R?

That’s not a bad sales pitch, is it?