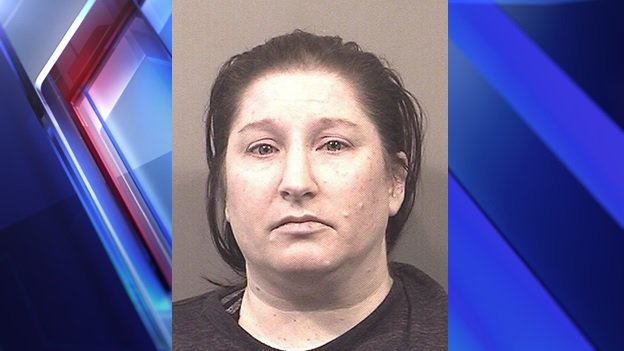 Greenwood, Indiana police responded to a report of a fleeing shoplifter at the Meijer grocery store on State Road 135 and Main Street. They located the suspect, later identified as IMPD Officer Suzanne Binder, 37, walking through a nearby Fazoli’s parking lot.

The cop turned on his lights and orderedBinder to stop, and said he’d release his K9 if she didn’t. According to a police report, she responded, “You can’t do that, it’s a misdemeanor.”

She continued walking in front of the other hero’s car; he ordered her to stop seven times. When he eventually attempted to place her under arrest, she tried to pull away.

The hero took her to the ground and was was finally able to get her in handcuffs. As this was taking place, Binder shouted she was an IMPD officer. She did not have her badge on her at the time, but Greenwood police confirmed she is an officer for IMPD.

Several items were found in her backpack. Meijer loss prevention identified them as items stolen from the store. According to the report, the items included vitamins and sleeping aids, totaling $41 in stolen property.

IMPD says Binder has been employed with them for 14 years. Her pay has been suspended pending termination. They provided the following statement:

At the time of Officer Binder’s arrest, she had no police powers and was not serving in active duty capacity. Officer Binder has been employed with IMPD for 14-years and [is] currently assigned to the Manpower Pool for non-disciplinary reasons. With cooperation from the Greenwood Police Department investigators from IMPD’s Special Investigative Unit are conducting an independent criminal investigation.

After reviewing the probable cause, IMPD Chief Bryan Roach has suspended Officer Binder without pay pending a recommendation of termination to the Police Merit Board.

IMPD says the “Manpower Pool” is a category within the department in which an officer may be temporarily placed while on limited duty status. It could be for an injury, illnesses, or disciplinary reasons.

ABOUT US
Eric started out writing about cars for mainstream media outlets such as The Washington Times, Detroit News and Free Press, Investors Business Daily, The American Spectator, National Review, The Chicago Tribune and Wall Street Journal.
Contact us: Eric Peters [email protected]oo.com
FOLLOW US
© copyrights by ericpetersautos.com - 2016