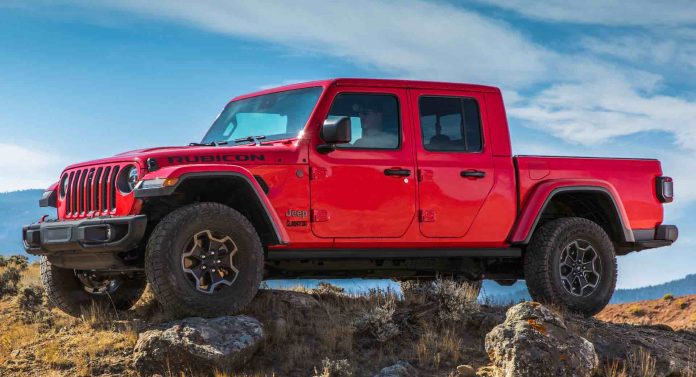 The idea of bolting a bed to the back of a Jeep isn’t new – it was done decades ago – but it’s nice that Jeep remembered it!

And improved upon it.

This Jeep-with-a-bed has four doors instead of just two – as Jeeps with beds had in  decades past. And now you can get it with a rumbly diesel engine, too.

Or, stick with the standard gas V6 – and the stick. 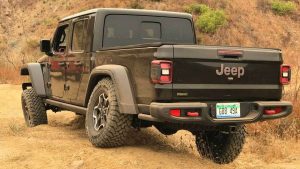 Which you can do because this Jeep is just about the only new truck you can get that comes standard with a manual transmission.

The Gladiator is a four-door Jeep Wrangler with a pick-up bed behind it that’s meant to both compete with and offer an alternative to mid-sized trucks like the Chevy Colorado/GMC Canyon twins, the Nissan Frontier, Ford Ranger and Toyota Tacoma.

Some of them offer a V6; the Gladiator comes standard with it. One of them offers a diesel engine – but it’s not a V6 and you have to buy the most expensive trim before you can buy it. 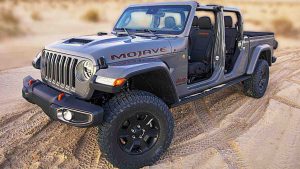 Jeep offers a diesel V6 option with all Gladiator trims.

Which otherwise all come standard with a manual transmission – and a big V6 instead of little four, as is standard in most of the rest, which are also mostly automatic-only.

And none of which offer things like doors you can unbolt and a roof that comes off, which the Gladiator also comes standard with. 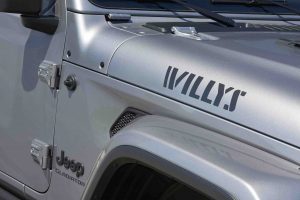 But this is a case of getting what you paid for – including things you can’t get elsewhere,no matter how much you pay for them.

The big news for ’21 is the availability of a mighty (442 ft.-lbs. of torque) turbodiesel V6 engine option – which is actually a diesel package that includes a 3.73 axle ratio, locking differential, dual batteries and 245/75-17 all-terrain tires.

An alternative to a truck that does more than most trucks can do.

Gratifyingly hands-on and mechanical. Manual crank windows are available; 4WD is engaged by pulling a shift handle, not by pushing a button.

More than one engine – and transmission – option.

It’s only available with a crew cab – and a short (five foot) bed. 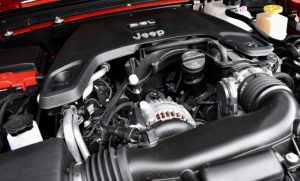 The Gladiator costs more than the mid-size pick-ups it kinda-sorta competes with for buyers – but Jeep gives you more for your money, including a standard 3.6 liter, 285 horsepower V6 for openers.

Pick-ups like the Chevy Colorado and its GMC-badged twin the Canyon come standard with a 2.5 liter, 200 horsepower four cylinder engine.

The Ford Ranger  comes only with a four cylinder engine – though it is turbocharged to 270 horsepower. But it is paired only with an automatic transmission. Ditto the automatic-only Colorado/Canyon. The Gladiator’s V6 gives you the option to buy one if you like but comes paired with a six-speed manual transmission as standard. 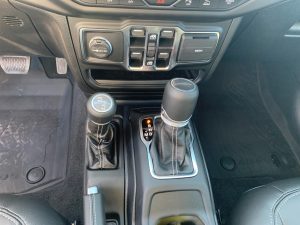 The Toyota Tacoma offers a manual paired with a V6 – but only in the TRD trim, which stickers for $34,835 – making it slightly more pricey than the base trim Gladiator

What none of the above offer is a diesel engine option in any trim — or even at all.

The Tacoma and Ranger and Frontier are gas-engine only. The GM pick-ups are available with a diesel engine but the option is restricted to high-trim crew cab models and it’s only a four cylinder (2.8 liter) turbodiesel that makes just 181 horsepower and 369 ft.-lbs. of torque. 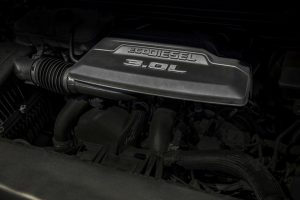 The catch is you also have to buy the mandatory-with-this-engine eight-speed automatic, which adds another $2,000 to the tab.

Weirdly, the diesel is rated to tow less than the gas V6, which maxes out at 7,650 lbs. vs. 6,500 for the diesel-powered Gladiator. Apparently, this isn’t because the diesel’s weaker but rather because the iconic Jeep barred grille doesn’t allow for sufficient airflow to keep the hunky diesel cool enough to pull as much weight as the gas V6 is rated to pull.

But the diesel doesn’t have to work as hard to pull a load. 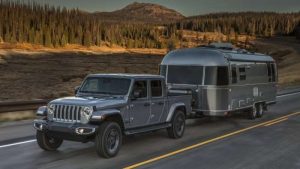 There’s also the compensation of range – a function of the diesel’s better mileage. A diesel-powered Gladiator goes about 6 miles farther per gallon (22 city, 28 highway) than the gas-powered version (17 city, 22 highway with the optional automatic; 16 city, 23 highway with the standard manual) which works out to about 532 miles of highway driving for the diesel vs. about 440 for the gasser.

And in an End Times scenario, the diesel has the advantage of being capable of burning home-brew whereas you need a refinery to make gasoline.

4WD is optional in all of the Jeep’s mid-sized truck competition. 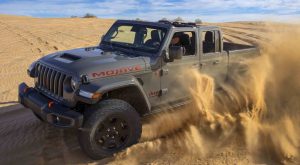 The Gladiator – like the “mid-sized” pick-ups it nominally competes with – is closer to being full-sized, if compared with the size of historically full-size trucks from before the early 2000s, when “full-size” trucks were super-sized.

Most of the Gladiator’s length is its cab, which is crew – four full-sized doors – counterbalanced by its short (five foot) bed, without which it would be Wrangler-sized.

Actually, it would be a Wrangler. 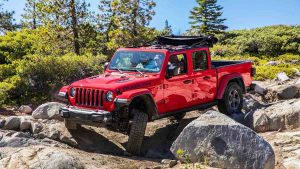 But it’s the width that modulates the length of this thing. It is only 73.8 inches through the hips, which is – no kidding – about half a foot less wide than a current full-size 4×4 pickup like the Ford F-150 FX4 I reviewed a couple of weeks ago.

This makes it feel not-too-big on the road and gives it a big advantage off-road, which is the Gladiator’s natural second environment. It can pass in between trees on the side of trails that would stymie a 1500-sized 4×4 – and it can crab by another vehicle coming down the narrow dirt or gravel road with no shoulder on either side that you’re trying to go up.

It is also something else that none of the mid-sized pick-ups it nominally competes with are – which is mechanical and hands-on, from its standard roll-up windows to its manually-engaging 4WD – which engages the ranges positively rather than electronically. This way of engaging the ranges is also probably more durable over the decades than anything electronic. Electrical contacts and switches wear over time; connections corrode. Sensors stop sensing – and then what? The Gladiator’s 4WD shifter will never suffer such a failure and even if it does fail, it’ll be mechanically and you can still gerry-rig rods and cables in a pinch. 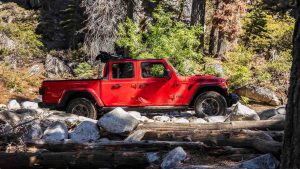 The option to shift gears mechanically is another tactile plus. It gives you, the driver, more control over the drive because you control the shifts.  Modern automatics are also electronic things – their shifting controlled by their programming. This if ok, if you don’t mind not having the same degree of control. But if you want total control over your shifts, the Jeep’s the thing.

This time around, I got to test drive the Gladiator with its new turbo-diesel V6 and the most impressive thing about it to me wasn’t how much it tows but how much it hauls. 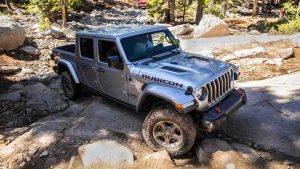 For comparison: A Chevy Colorado diesel needs more than 9 seconds to heave itself to 60, on par with the slowest gas-engined economy cars on the road.

The Jeep’s speed is the result of having both torque and horsepower – almost as much of the latter (260) as the gas V6 makes (285). The usual diesel disparity between horsepower and torque – as in the case of the Chevy Colorado diesel’s 180 hp and 369 ft.-lbs. of torque – doesn’t exist here. You get both horsepower and torque in abundance and because of that, the diesel-powered Gladiator is both Clydesdale-like on the low end, as you’d expect from a diesel – and not breathless once you’re rolling. 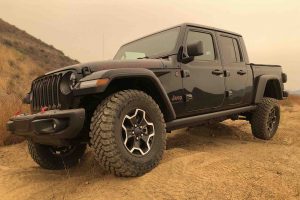 Punch it at 55 to pass a slowpoke and the thing passes.

And it will also go almost anywhere, since it can crawl over almost anything. Especially Rubicon versions, which come with a Rock-Trac transfer case with 4.0:1 low range gearing (2.72:1 is standard in other trims) front and rear locking diffs, a disconnecting front sway bar (to allow greater individual articulation of the front wheels) removable front and rear bodywork and 33-inch off-road knobby tires.

Other brands have been trying really hard to recover their identities by reaching into the past and incorporating bits and pieces of it into their current models.

Jeep hasn’t had to do that because it never forgot its past. 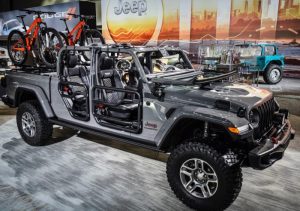 The Gladiator is a new Jeep, obviously – but it’s also obviously a Jeep and so not like anything else. It is the only rig you can buy new that has a hood you open from outside – by unclamping it. A roof that unbolts.

It is modern, of course – and so offers such things as an LCD touchscreen with interesting apps such as Off Road Pages that display the vehicle’s pitch and roll as you go – but it is also charmingly familiar to anyone who drove a Jeep 40 years ago and loved it. The upright breadbox dash. The upright windshield. The very deliberate absence of a button to engage the 4WD. Power windows – if you want them – that open and close exactly as far as you want them to – as opposed to the usual peremptory all the way up and all the way down and good luck trying to stop them where you want them to.

All versions have 11.1 inches of ground clearance and can ford 30 inches of water – but you can climb aboard without a ladder and once you’re in, the view is spectacular. Not because you’re jacked up off the ground but because of all the vertical glass. Your are inside a metal box with windows all around, not an inward-curving canopy that slopes to the rear, tunnel-visioning your view of the rear.

The Jeep has a first-rate back-up camera – but you need it like Trump needs another cheeseburger.

You also have equal headroom – 42.8 inches front and rear – because of the box it comes in. The second row has 38.3 inches of legroom, too – and so comfortably carries adult-sized passengers while the five foot bed carries your dog or a pair of dirt bikes. Its bedwalls are not Everest-high, either – so you don’t need a stepladder to get at what you put in it. 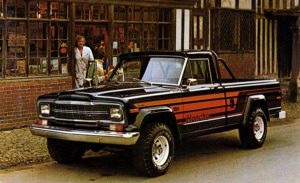 But such trucks aren’t as popular today because most people who buy trucks today need the extra passenger-carrying capacity and – apparently – don’t need a six or eight-foot bed.

It could use more interior storage space.

There’s webbing on the lower door panels, no molded-in place to toss your loose change and such.

And Jeep had to add the obnoxious engine stop/start system (ASS) that shuts the engine off at every red light, then stutter-starts it back to life when the light changes – to “save gas” but really to comply with federal stupidities. All car manufacturers have had to add ASS – because of the need to placate federal stupidities. 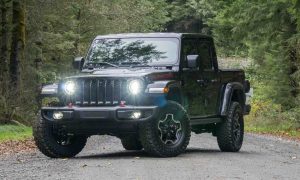 But ASS is easily (and legally) defeated if you prefer to leave your engine running until you decide to shut it off.

It’s nice that Jeep remembered not to forget!