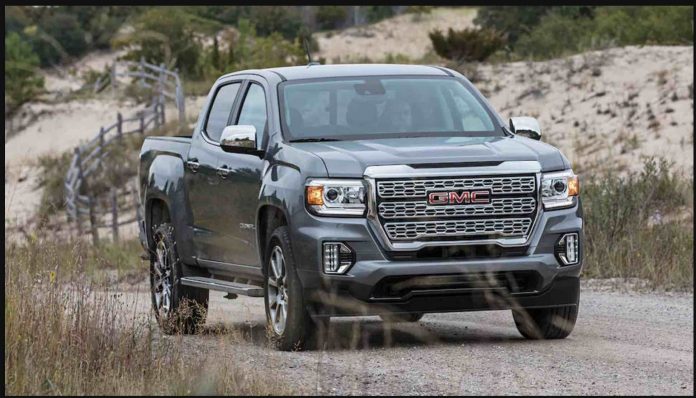 It’s no longer possible to buy a new compact-sized truck. The smallest new trucks are mid-sized and the interesting thing about that is they’re very close to being full-sized.

Relative to the size full-size trucks used to be before they got super-sized. 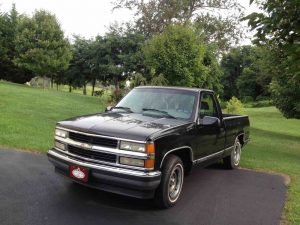 The ’95 didn’t come standard with AC, either.

The Canyon is the GMC-badged version of GM’s mid-sized pick-up truck, which is also sold under the Chevy Badge as the Colorado.

Both are mechanically the same but have different exterior styling/interior layouts, with the GMC being the “nicer” – and somewhat pricier – version.

The base Elevation trim with an extended cab, the 2.5 liter engine paired with a six-speed automatic and rear-wheel-drive stickers for $26,400. Four wheel drive is available with this engine. 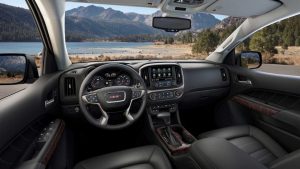 You can also upgrade to a 3.6 liter V6 engine – which comes paired with an eight-speed automatic.

A top of the line Denali crew cab with the optionally available 2.8 liter turbodiesel engine and 4WD lists for $48,130.

The main functional difference between this truck and current full-sized trucks is the Canyon is not available with an eight-foot bed (a 5.1 foot bed is standard; the “long” bed is 6.2 feet) or a two-door/regular cab.

The same’s true of all the trucks in this class. If you want just a two-door truck – and an eight foot bed – you’ll have to move up a size. 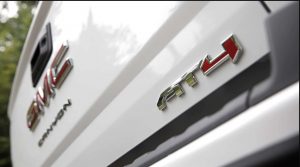 Denali trims get a new face – grille/bumper treatment – based on the face of the just-redesigned 2021 full-size Sierra Denali pick-up.

The previous All Terrain trim has been replaced with a new-for-2021 AT4 trim, which includes M/S-rated 17-inch off-road tires, a one-inch lift, skid plates and a heavier-duty suspension, among other upgrades.

As affordable as full-size trucks used to be.

Much less affordable than compact-sized trucks used to be. 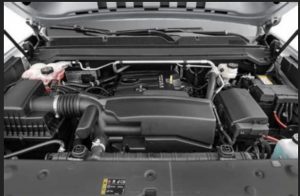 One of the few things about this truck that’s small is its standard engine, a 2.5 liter four cylinder. But its 200 horsepower is large – historically speaking.

Back in the ‘90s, full-size trucks like the Chevy C/K 1500 maxed-out around 200 horsepower – with their optional V8s that were twice as large as the Canyon’s four – and used twice as much fuel.

Well, maybe not quite that. 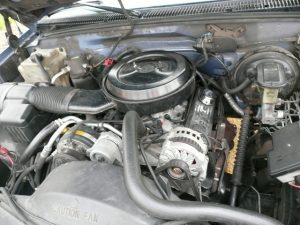 But, that can be remedied.

This version of the Canyon is also the hot rod of the bunch. It can get to 60 in about 6.9 seconds – a very speedy time for a truck.

There’s a third under-the-hood option, too.

GMC offers a 2.8 liter Duramax turbo-diesel engine that makes 181 horsepower . . . and 369 ft.-lbs of torque, which twist is comparable to that made by V8s twice the size – with twice the appetite.

Buy this one and your Canyon can pull a mighty 7,700 lbs. – the highest tow rating in the class.

It can also go about 30 miles on a gallon of fuel, once you’re up and rolling.

The Canyon drives like the full-size truck it almost is – or rather, would have been so categorized before “full-size” became super-sized.

This is a compliment – as well as a criticism.

The Canyon – and its Chevy badged almost-twin – feel solid and sturdy, which compact-sized trucks like my ’02 Nissan don’t.

They are also as easy to drive as full-size trucks used to be. And easier to drive and deal with than current full-sized behemoths have become. A 6ft 3 220 pound man (me) doesn’t feel ten years old and 100 pounds behind the wheel of this thing. You can reach the controls without using one of those grabby things old people use to get the coffee can off the top shelf.

You can get in without climbing in. 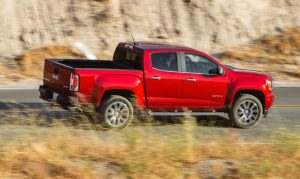 The shortest version – extended cab with the five foot bed – is just shy of two feet longer end to end than a ’95 C/K 1500 regular cab. That is a lot of truck. A crew cab – 224.6 inches long – is two-and-half-feet longer. That is also as long as a 1970 Buick Electra 225, the famous “deuce and a quarter,” which was pretty much the longest car GM ever sold.

You will need maneuvering room.

But you’ll have no worries powering your way out of most situations. The four cylinder Canyon is quicker than a ’95 C/K 1500 with the V6, the latter needing just over ten seconds to achieve 60 while the GMC gets there in just over 8 seconds – almost exactly as quickly as the V8-powered version of the ’95 C/K 1500. 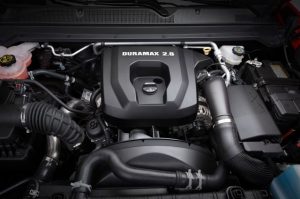 With the V6, the only new truck that’s quicker is a super-sized truck. But – arguably – the best engine this truck offers (uniquely, in the class) is the available 2.8 liter turbodiesel four, which comes with an exhaust brake – enhancing the big rig feel (and sound) without actually having to deal with a too-big rig.

And the Canyon’s got a more favorable power-to-torque ratio.

It weighs about the same as the ’95 C/K 1500 (around 4,100 lbs.) but has almost 70 ft.-lbs. of torque more than the Chevy’s V8 had to move that weight. It is also capable of almost 30 MPG on the highway, which is how you justify spending the $3,730 extra it costs to add the diesel package – which includes a heavy-duty transmission, cooling and other upgrades – to your Canyon. That and the ability to pull an almost 8,000 pound trailer, which is enough to easily – as opposed to marginally – pull a 5,000 pound RV or a pair of jetskis/ATVs.

But – here’s the catch – GMC doesn’t let you buy this engine unless you also buy four full-sized doors. If you want to roll coal, you’ll have to buy the higher-priced crew cab.

This is a long truck – but it’s not available with a long bed. Or two doors. You can choose two smaller additional doors – the extended cab.

Which explains why you can’t choose anything longer than a six-foot bed. Add two more feet to this truck and you’d need tugs to maneuver it.

So what you have here is an almost-full-size truck with a bed that’s still the same size as a compact pick-up’s bed. But – for once – this isn’t because of government fatwa’ing. It appears that most of the people who buy pickups want an extended or crew cab and aren’t pining away for an eight-foot bed, which would proportionately fit a truck this size if it had a two-door regular cab ahead of it. 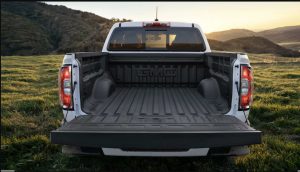 On the upside, the Canyon’s bed is a little wider than a compact pick-up’s bed and you can use a bed extended or just keep the tailgate down to haul the stuff that would fit in an eight-foot bed with the gate closed.

It’s also much easier to get at – and into – the Canyon’s bed than current super-sized (and super tall) pick up truck beds. They come with step ladders built into their tailgates for a reason.

Canyons come standard with full-size truck legroom – 45 inches – for the driver and front seat passenger, complemented by 41.4 inches of headroom. To put this in context, a compact-sized pick-up such as my ’02 Nissan Frontier has 41.3 inches of legroom and 39.3 inches of headroom. The back seats in my truck are also jump seats – folded up against the sides. 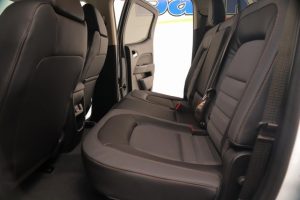 It is almost impossible for an adult to sit back there – and hard to get back there.

In the Canyon, you’ve got real back seats – facing forward – and even the extended cab has a viable 28.6 inches of legroom. The crew cab has 35.8 inches – as well as underseat storage cubbies. It really can seat five grown men comfortably. My Nissan can seat two comfortably; the other three will have to ride uncomfortably . . . in the bed.

Even with four doors trucks like my ’02 Frontier were too small for families or anyone who needed to regularly carry two or three passenger. Which probably explains why no one makes trucks the size of my ’02 Frontier anymore. 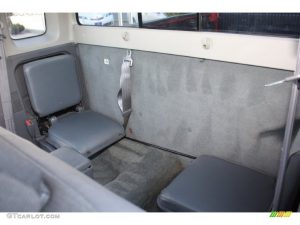 Another thing no one makes anymore is a basic truck. Which is why trucks have become so expensive. The base Elevation trim includes a power driver’s seat, 7-inch touchscreen, cruise control, power windows and locks, AC (of course) as well as an automatic transmission. My ’02 came standard with manual roll-up windows, a manual transmission and no touchscreen.

Which is why it stickered for $14k when it was new and the new Canyon stickers for $26k.

But that’s still a relative bargain compared with what a new super-sized truck will cost you – especially if you want a 4WD super-sized truck. The base trim GMC Sierra – the Canyon’s much-bigger brother – stickers for $33k and change to start, without 4WD.

The Canyon’s competition has gotten tougher.

The new Ford Ranger – which came out just two years ago – comes standard with a torque and horsepower-rich 2.3 liter turbocharged four cylinder engine (270 hp and 310 ft.-lbs. of torque, nearly as much as the GMC’s optional diesel) for just $24,820 to start and it can pull almost as much (7,500 lbs.) without costing you extra. 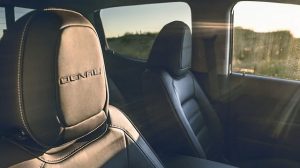 Nissan now includes a very strong (310 horsepower) 3.8 liter V6 with every (new) Frontier pick-up – and for $26,790 to start – which is only a few hundred bucks more than the base price of the four cylinder Canyon.

You can buy a 4WD-equipped V6 Frontier for $29,680 – about $2k less than the price GMC charges for a similarly outfitted V6/4WD Canyon.

In the GMC’s defense, it’s still the only truck in the segment that offers a diesel and the capability to pull nearly 8,000 pounds (the V6 Frontier’s maximum tow rating is 6,720 pounds; the Tacoma can pull a maximum of 6,800 pounds). 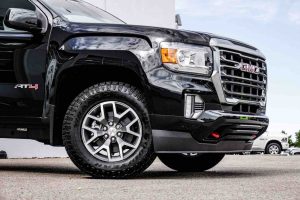 It’s also – nominally – the “nicer” truck – especially vs. its Chevy-badged twin, the Colorado – which is oriented more toward work and off-road work than luxury. The Colorado isn’t available with anything like the GMC’s Denali trim – which comes with 20-inch “diamond  cut” wheels, special leather seats and ashwood trim. But the GMC is available with similarly serious off-road gear, if you buy the AT4 version – which is functionally similar to the Colorado ZR2 . . .

If you’re not ready to say, super-size me! – a truck this size could be just the right size.

Provided you don’t need to cart a stack of 4×8 sheets.