Trucks are hugely popular; they are selling so well that major automakers like Ford and GM have been dropping cars from their lineups – in order to make room for more trucks (and truck-like SUVs).

But trucks have also been getting huge.

Current full-size trucks are so big – and so tall – that they come with ladders built into their tailgates, so as to make it possible to get to the bed.

Not everyone who needs a truck needs one that big. 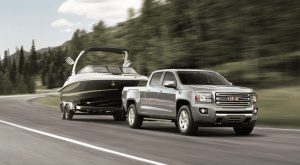 The Canyon is a mid-sized pick-up truck and the GMC-badged version of the Chevy Colorado pick-up.

Both trucks are mechanically identical, but each has brand-specific exterior and interior trim as well as standard/optional features.

GMC is considered a slightly more “upscale” brand than Chevy – so the Canyon’s prices are slightly higher than the Colorado’s.

You can pick up a base trim 2WD Canyon extended cab with a 6.2 foot bed, 2.5 liter engine and six-speed manual transmission for $22,200 to start vs. $21,300 for the mechanical identical Chevy version of the same truck. 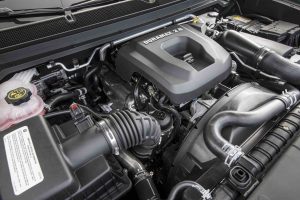 In addition to their standard four cylinder gas and optional gas V6 engines, both trucks offer a turbo-diesel four cylinder engine, a feature none of the other trucks in this class – models like the Nissan Frontier and Toyota Tacoma – currently offer.

The new Ford Ranger – which returns for 2019 after an eight-year absence from Ford’s lineup – will reportedly offer one, but not until later this year.

So for now, the GM twins are the only not-too-big trucks available with a brawny diesel engine. 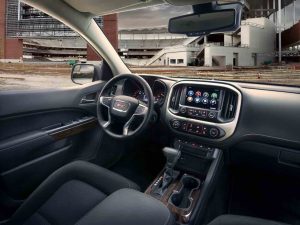 They are also among the few new trucks – huge or not – still available with a manual transmission.

AppleCarPlay and Android Auto5 are standard in all trims (formerly optional in some) and all versions get an updated touchscreen/apps.

The voice recognition system has been upgraded with an additional microphone. 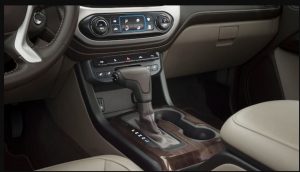 4WD only available with optional V6 and diesel engine.

Manual transmission only available with the four-cylinder engine. 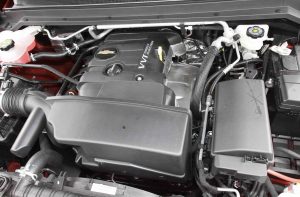 The Canyon offers three engine choices – an upgrade over the usual two –  including the only diesel engine currently available in a mid-sized pick-up.

Standard equipment is a 2.5 liter, 200 hp four cylinder, which comes paired with a standard six-speed manual; a six-speed automatic is available optionally.

Canyons with the 2.5 liter engine are not available with 4WD.

This engine is much stronger than the Toyota Tacoma’s standard (and larger) 2.7 liter four cylinder, which only manages 159 hp. And Toyota pairs this engine with a standard automatic transmission. 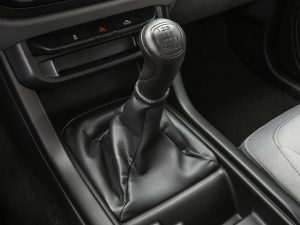 Nissan gives you the choice of standard manual or optional automatic transmissions in the 2019 Frontier, but the standard 2.5 liter engine comes in a distant third on power – just 150 – 50 horsepower fewer than the Canyon comes standard with. 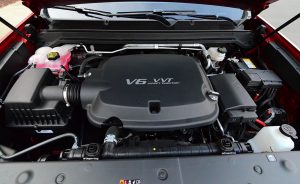 However, the Canyon’s V6 is paired only with an eight-speed automatic – while both the Tacoma and the Frontier offer manual transmissions with their V6s (as well as simpler five and six-speed automatics as options).

The Frontier and Tacoma are both older designs – which is by no means a bad thing –  because their designs predate the increasingly over-the-top design of the newest things. Neither of those trucks have ASS, for instance – Automated Start/Stop. And their engines aren’t direct injected (the Canyon’s are), which means simpler port-fuel injection and no post-warranty worries about carbon-fouled valves – which is a worry with direct-injected engines.

You can pick either 2WD or part-time 4WD with driver-selectable High and Low range gearing. However, to get 4WD, you have to buy the V6. Or the Canyon’s third available engine.

Which is also a unique engine.

Equipped with this Mighty Mouse of an engine, the Canyon can pull 7,700 lbs. – also best in class and by  a significant margin.

The Canyon’s diesel comes paired with a heavy-duty six-speed automatic transmission (not the same transmission as the one used with the 2.5 liter engine) a heavy-duty cooling system and alternator – as well as an exhaust brake, just like the really big rigs. 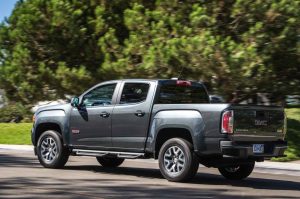 No one sells compact-sized trucks anymore, in part because they lacked power and capability. The Canyon has both – no matter which of its three engines you pick.

The least it can pull (with its standard 2.5 liter engine) is 3,500 lbs. – which is as much (or more than) many compact trucks were able to pull, period.

With the diesel, it can pull almost 8,000 lbs. – which is very close to the capabilities of some full-size pick-ups. 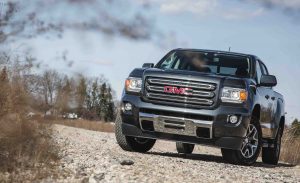 With its mid-range 3.6 liter V6, the Canyon can get to 60 in just over 7 seconds. And while the manual-equipped version (with the standard 2.5 liter engine) isn’t as quick as that, it’s lots of fun being able to run through the gears yourself – and play with the clutch.

With the diesel – and the exhaust brake – you can play Big Rig (make the exhaust braaaaaaaaaap as you use compression to decelerate) without all the Big Rig downsides, including width.

The Canyon is a reasonably lithe 74.3 inches through the hips, about the same as most current mid-sized cars. 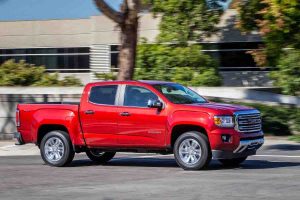 The just-redesigned 2019 Silverado 1500 is just over 80 inches through the hips, which means the Silverado often takes up every inch of space in its lane – or feels like it. The specter of smacking outside rearview mirrors with the car in the opposite lane is a constant worry – and dealing with drive-thrus is a close-run business, especially if you’re coming into one at an angle. Those concrete poles loom large as the gap between your expensive, shiny truck and a trip to the body shop gets narrower and narrower . . .

The Silverado’s great out on the range, in the wide-open spaces – where there’s limitless room to maneuver. As out on the open ocean. But closer to shore is another thing. 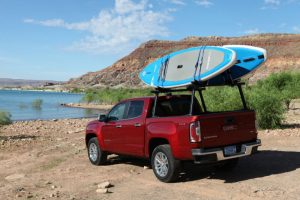 The Canyon’s a lot more everyday friendly in suburbia, which is pretty much the point and explains why GM doesn’t offer a regular cab/long bed variant. This is a truck made to be agreeable as a commuter, wife-drivable at the end of the school day – with guts enough to pull the boat to the ramp on weekends and cart the dog around in the bed whenever.

It’s not really a work truck – though it can be used to do real work.

And you don’t need a ladder to get into its bed, either.

The longest-available bed may only be a six-footer, but being able to load and unload it without a ladder (or a forklift) adds a degree of everyday ease-of-use that’s lacking in the the latest super-sized behemoths.

The Canyon’s visual proportions are a bit skewed; the bed is short relative to the cab and the bed’s walls are high relative to the length. But then all current mid-sized trucks share this same general look.

Interesting fact: The Canyon is actually about the same overall length (224.6 inches for the crew cab variant) as some ‘90s-era full-size (1500 series) trucks. But the lion’s share of the length is taken up by the cab rather than by the bed.

Still, the Canyon’s about two feet less long than a Silverado 1500 crew cab – which means it’ll fit in spots the Silverado has to pass. This may include your garage.

The main downside – and it might not be one if you don’t need it – is that the Canyon isn’t available in a “work truck” regular cab/long bed configuration, as most 1500s still are.

But none of its rivals offer that arrangement, either. 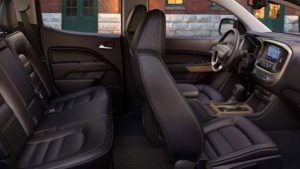 The standard extended cab has tight back seats – there’s only 28.6 inches of legroom, which is about three inches less than in a Mustang (which has 30.6 inches) though not as tight as the useless backseats in a Camaro (appx. 24 inches).

But they are roomier than the backseats in compact-sized trucks such as my ’02 Frontier (this is the old model; the new one is mid-sized, like the Canyon). And you can always upgrade the back seats by going with the crew cab, which bumps the legroom up to 35.8 inches.

While both bed lengths (6.2 and 5.2 foot) can be used to cart eight foot long items – with the tailgate down –  you’ll need to cant things like 4×8 sheet of drywall or OSB sideways, which limits how many sheets you can carry per load. 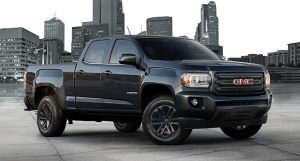 All trims come with an LCD touchscreen, but the SLE and higher grades get an upgraded 8-inch screen with 4G WiFi and three additional USB ports.

The optional All Terrain package is the same as the better-known Z71 off-road package available with the Chevy-badged Colorado (and other Chevy-badged trucks, including the Silverado). It includes off-road tuned HD shocks and suspension, a locking rear axle, skid plates and all-terrain tires on 17-inch wheels – plus heated seats and a heated steering wheel. 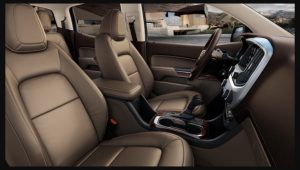 However, it’s very similar (other than superficialities) to the top-of-the-line equivalent Colorado, which will cost you a bit less because it’s a Chevy.

All trims come with a capless fuel fill, which is nice because you never have to sweat losing the cap or having the “check engine” light come on because you didn’t tighten it all the way. 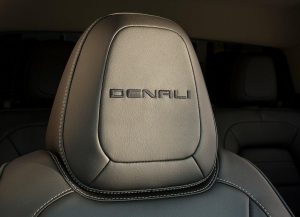 A damped EZ-Lift/Lower tailgate is available, too.

The Canyon’s optional diesel is expensive to buy – $4,965 – and Chevy only lets you tick that option if you also buy the higher-up (and so, higher-priced) SLE, SLT and Denali trims. But you could at least potentially earn that investment back by leveraging the inherently longer lifespan of a diesel engine, which ought to run reliable for at least 250,000 miles with regular maintenance.

It will also cost you less to drive – because equipped with this engine, a Canyon rates 30 MPG on the highway (the 2WD version) which is outstanding mileage for a truck with this level of capability.

It would be nice if GMC allowed you a choice of beds with the extended cab version of this truck. This one comes only with the six-foot bed; if you want the shorter bed you (oddly) have to buy the larger cab.

Some rivals – like the Toyota Tacoma – offer more latitude when it comes to picking cab/bed configurations. 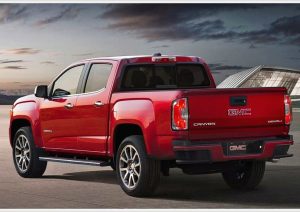 And others – like the Nissan Frontier – cost thousands less, at least to start. You can pick up a base trim Frontier for $18,990 (MSRP) and probably for closer to $17k once you wear down the salesman.

It’s not too big – and far from weak.

The truck’s main detraction isn’t the truck itself. It’s the way GM “bundles” and “packages” desirable options with ones you may not desire to pay extra for.

Or denies you the combinations you’d prefer, if you could pick and choose.