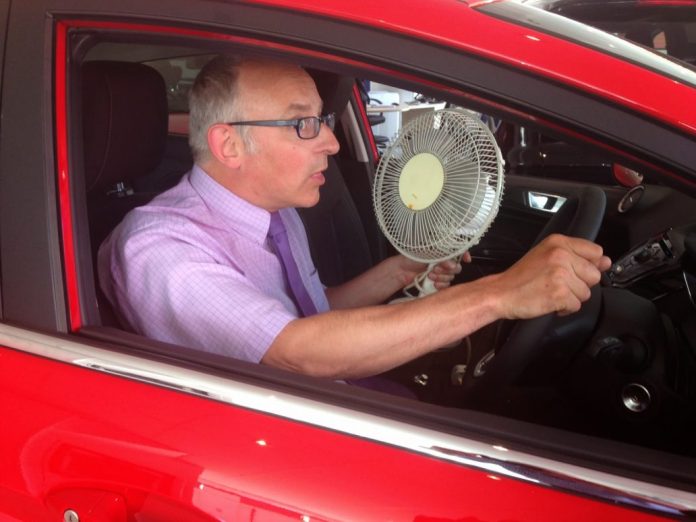 Remember when they banned the sale of those small cans of Freon – the refrigerant that used to be used in automotive air conditioning systems? You used to be able to buy these at any auto parts store and do-it-yourself recharge your car’s AC system.

They said it was necessary to ban those cans because Freon leaking into the air was bad for the environment; specifically, that it was carving a hole in the ozone layer. So only “certified” AC technicians could buy Freon – and afford the commercial-grade equipment necessary to service cars with Freon-based AC systems.

The financial burden  of paying these technicians fell upon the owners of cars that had Freon-based AC systems, which they could no longer recharge on their own for about $5 – which was the cost of a small can of Freon refrigerant, when it was still legal for anyone to buy it at any auto parts store. 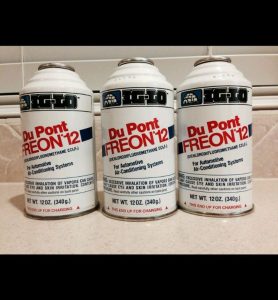 Then along came the new refrigerant – R134a. It has been the dominant car AC refrigerant since the 1990s-era “phase out” of Freon. It wasn’t a danger to the environment – or so one would assume, since people were once again allowed to buy small cans of it and (once again) recharge their car’s AC system for about $5 rather than pay several hundred dollars to an AC technician, as people who still own older cars with Freon-based AC systems are obliged to do (It’s either that or have their original AC system modified to accept the new refrigerant – and that costs more than $5, too.)

The new refrigerant – R-134a – which they told us was an “environmentally friendly” alternative to ozone-depleting Freon (which was also about to become open source before it was banned, as the patent on it was about to expire) is being given the same treatment. 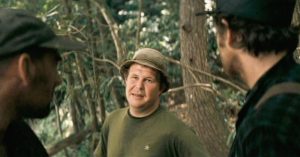 Or rather, we are being given the same treatment.

Several states – guess which ones – are in the process of “phasing out”  R134a .They mean, forcing it out. At least one has passed laws forbidding the sale of small cans of R134a at auto parts stores, as was done with small cans of Freon. Once again, only “certified” technicians are allowed to buy the refrigerant, which of course becomes much more expensive on account of the fact that it’s no longer a mass-market/retail item but a kind of proprietary item that only a relative handful of people – those “certified” people – can buy and which these “certified” people will charge many times $5 per can to instill in your car’s AC system. 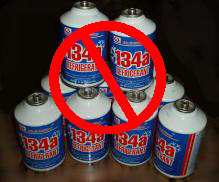 It is the opposite of that.

The government decrees you must pay to have it done, if you want it done. Forbids the doing of it yourself. Criminalizes and punishes those who try – as in the state of Washington, where one of these new de facto bans recently went into effect:

“Any person who negligently releases into the ambient air any 6 substance listed by the department of ecology as a hazardous air pollutant, other than in compliance with the terms of an applicable permit or emission limit, and who at the time negligently places  another person in imminent danger of death or substantial bodily harm is guilty of a gross misdemeanor and shall, upon conviction, be punished by a fine of not more than ten thousand dollars, or by imprisonment for up to three hundred sixty-four days, or both.”

And that’s not all.

“Any person who violates any of the provisions of this chapter, chapter  . . . or any of the rules in force under such chapters or section may incur a civil penalty in an amount not to exceed ten thousand dollars per  day for each violation. Each such violation shall be a separate and  distinct offense, and in case of a continuing violation, each day’s  continuance shall be a separate and distinct violation.” 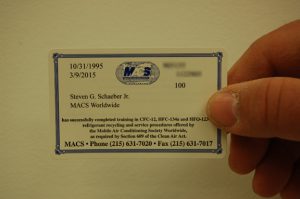 For selling a can of car AC refrigerant to a person not “certified.” Or using it, if during the process of instilling it in your car’s AC system, any amount of this “hazardous air pollutant” should be released into the air.

Read all about it, here.

People get in less trouble for sticking up a 7-11.  Unless, of course, they weren’t wearing a “mask” when they did it.

This GWP business is interesting because – like “masks” – it rests on assertions without scientific backing, if by “science” once means things established as fact or close enough to be persuasive in the absence of contrary facts. 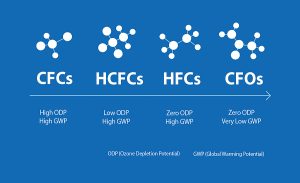 Just as it was asserted that “masks” must be worn in order to prevent people from getting or giving a sickness – absent any factual basis to support this assertion and in defiance of an accumulating mountain of contrary facts – so also the assertion that refrigerants like Freon and now R134a (and, inevitably, the next temporarily allowed refrigerant) must be rationed, taxed and ultimately banned outright in the name of assertions about their causing “global warming.” 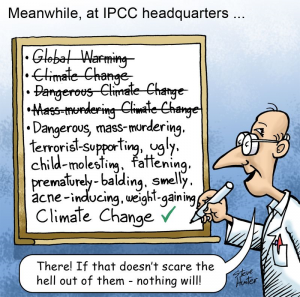 “Climate change” conveniently solves that problem by encompassing any “change” in the “climate” – and never mind whether the “change” is part of the natural cycle of things and not, as asserted, a “catastrophe” caused by “human action.”

The catastrophe is that assertions now trump facts – and cause massive economic damage in the name of salving asserted damage. To ease people’s fears of the bogeyman – their fears conjured and metastasized by the very people who stand to profit by them.

Politicians, such as Jay Inslee of Washington.

Not coincidentally, Inslee was a major Face Diaper pusher, too.

Now, if the assertions made about “global warming” (“climate change” can’t be pinned down and for that reason the term ought to be dismissed as what it is, which is unscientific) were backed by facts, then it would be hard to argue against necessary measures. But we are being enserfed on the basis of assertions – and that is fundamentally no different than sentencing a man to a long prison term because someone asserted he committed  a crime. 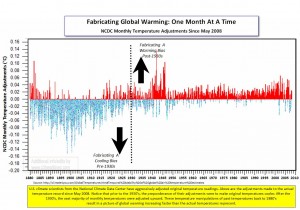 The legal system still requires proof – sufficient to back the assertion as likely fact – before sentence is levied.

Why shouldn’t the regulatory apparat be held to exactly the same standard?

Regulations can be just as punishing as any sentence of the court; indeed, they are more so because they punish many people rather than just one who stands accused, as in a court.

By not insisting on proof – of harm, especially – we have empowered an apparat that might as well be a lynch mob, just as vicious – and just as certain of its own purblind righteousness.