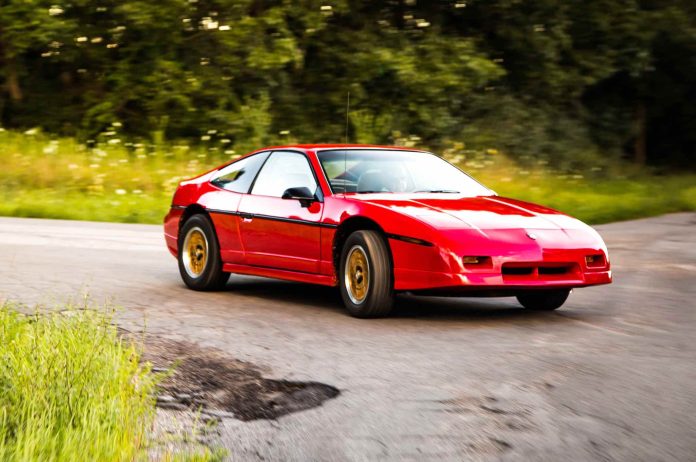 John Z. DeLorean, the eccentric but indisputably brilliant father of the 1964 GTO, also had a vision for a sexy, low-slung Pontiac two-seater. He even had a prototype built – the XP-833 Banshee. GM management, however, considered the proposed Pontiac coupe/roadster a heretical threat to the primacy of the Chevy Corvette and the Banshee was discretely shelved, along with DeLorean himself a few years later.

But the spirit of the Banshee concept would linger within the halls of Pontiac into the ’70s —  dormant, but far from exorcized. In the early ’80s, it was reincarnated in the form of an altogether new mid-engined, space-framed and polymer bodied two-seater called Fiero. 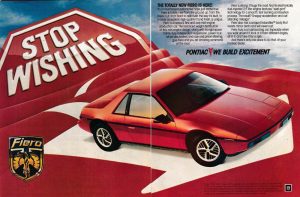 It was meant to be an affordable exotic – an American Porsche or Lotus. Unfortunately, other than the car’s mid-engine layout, exterior styling and unusual dent-resistant composite body panels, much of the original vision for the car never saw production. To save money, GM management insisted on the use of un-exotic chassis and drivetrain components – including a front suspension similar to that found underneath the front end of the Chevy Chevette, the lowest-priced car in GM’s lineup at the time – and a rear suspension identical to that of a Chevy Citation, Chevy’s next-lowest-cost economy car.

There was also a nothing-special 2.5 liter four cylinder “Iron Duke” engine under the hood that only made 90 horsepower. This engine was based on the last Pontiac V8 engine, the 301 – and both were designed primarily to be light-weight and fuel-efficient. 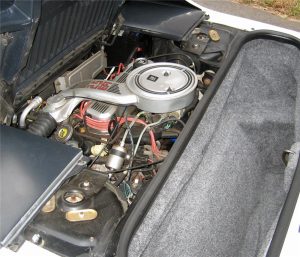 Still, what eventually saw the light of day in 1984 was a very sharp-looking car that was initially very popular with buyers -136,840 of whom who were willing to overlook its weaknesses because of its attractive styling, fun personality and low price.

The ’84 Fiero was was also lauded by Car and Driver magazine as one of that year’s Ten Best new cars.

A modified ’84 Fiero even beat out the also-new Chevy Corvette for pace car duty at the Indianapolis 500 that year.

Production versions of the Fiero pace car were offered for sale with the same “aero” snub nose treatment and bodywork featured on the pace car – but sans the specially-built “super duty” 200-plus horsepower engines used in the real pace cars. Only 2,000 ’84 Indy 500 pace car replicas were manufactured – all of them in special white paint with powder-coated “aero” wheels, silver leather and red two-tone interiors, quad exhaust tips and stereo speakers built into the headrests of the seats. The throttle body-injected 2.5 liter “Iron Duke” four was mechanically the same as in standard Fieros, but got dressed up with red spark plug wires and silver/black air cleaner and rocker cover. 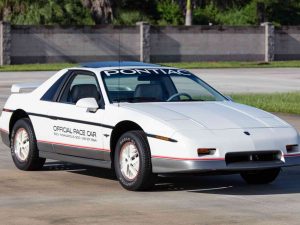 For the second-year follow-up, Pontiac addressed the Fiero’s power problem by offering a new V6 option in the SE and GT trims. This engine developed 140 hp, a significant uptick over the output of the base 2.5 liter engine. Gradually, the car was transforming into the sort of car envisioned by its primary designer, Hulki Aldikacti. Ironically, despite these improvements, sales fell through the floor to just 76,371 units – an alarming turn, insofar as GM upper management was concerned. Apparently, problems with the first-year Fieros — including a tendency for the engine to catch fire – had soured many buyers on the car. Word had also gotten out about the Fiero’s less-than-sexy Chevette-sourced chassis bits, severely undermining its sports car credibility. 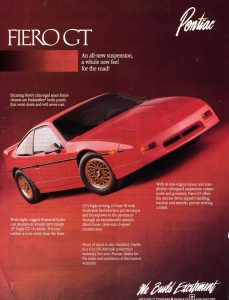 It was history repeating itself, in a different way.

Back in the late 1950s, GM launched the Chevy Corvair – which was meant to be a low-priced but highly innovative economy car. It had a rear-mounted, air-cooled engine and sporty styling. It got into trouble because of just that.  Many buyers expected more from the car than GM had built into it. The Poorsche – as some called it – had a tendency to lift-throttle oversteer when maneuvered aggressively by novice drivers, especially if the tire inflation pressure recommendations were ignored. This wasn’t a problem for Porsches – which shared a similar drivetrain layout and had similar tendencies – because most people who could afford Porsches weren’t novices. VW Beetles also had a similar layout – but were so underpowered it was hard to get them going fast enough for lift-throttle oversteer. 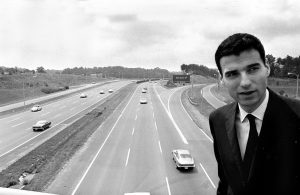 But the Corvair – which had nearly twice the power of a Beetle and cost a third as much as a Porsche – got into the hands of a lot of people looking to go fast who didn’t have the skills to handle it. The “public safety” lawyer Ralph Nader made a living off his savaging of the Corvair as being “unsafe at any speed.”

With the Fiero, it was a case of trying to attract drivers who wanted to go fast – in the straights as well as the curves – and disappointing them while not attracting a sufficiency of buyers just looking for an economical little commuter car.

Still, the Fiero had managed a good start – especially in view of the way it was hobbled by upper management cost-cutting. 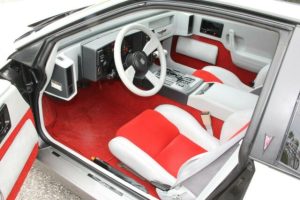 Pontiac managers wanted to introduce a turbocharged V6 with a five speed manual rather than the four speed unit without overdrive that was initially used, along with a totally revised suspension unique to the Fiero that would have made it a legitimate sports car rather than a sporty-looking commuter car. These changes also might have turned the Fiero (like the Banshee) into a real threat to the Corvette – and that may explain why they never got approved. With sales dropping so precipitously after just one year on the market, it became even harder for advocates with Pontiac to make the case for upgrading the car.

Still, some things did manage to get through the pipeline, eventually. These included the five speed Getrag-sourced manual transmission the car ought to have come with from the beginning, as well as a new fastback bodystyle (for ’86) and an available 2.8 liter V6. These changes somewhat salved the sales droop of the previous year, with a noticeable tick upward to 83,974 cars sold. 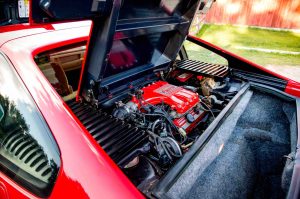 But ’86 would prove to be the high water mark for the Fiero.

The mostly carryover ’87 model (which received some minor tweaks, including distributorless ignition and a new cylinder head for the base four cylinder engine that resulted in a slight increase in output to 98 hp) never came close to matching the sales performance of the previous year.

Only 46,581 found homes – a near-50 percent plummet over the prior year. It was clear  the Fiero was in serious trouble.

A desperate Hail Mary pass was attempted for 1988 – the final (and arguably, best) year for the Fiero. At last – literally – the car got a credible sports car all-independent suspension system very similar to designs then in use by Lotus (which GM had just acquired the rights to). A new Formula model was offered – along with much-improved vented four-wheel-disc brakes. 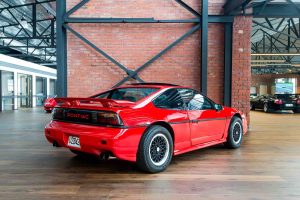 The ’88 GT lived up to the promise of 1984. Straight line performance was very good (15 second quarter miles times were possible) and handling was excellent. Everyone who drove the car agreed it was as fun to drive as the original had looked fun to drive.

Had this car been introduced four years earlier, the Fiero might have saved Pontiac, which eventually also went to sleep with the fishes – arguably because, post-Fiero, it had nothing Pontiac to offer except the badge. The Fiero was the last Pontiac-specific car that wasn’t re-sold under other GM badges. Its demise heralded the eventual demise of the Pontiac badge – which sharp eyed observers could see was itself in trouble years before that happened.

The division had already lost the Firebird and Trans-Am, two of its former hot-sellers, which (after the 1981 model year) had been turned into restyled Camaros sold under Pontiac badges, without any Pontiac mechanicals. The rest of the lineup was also the same. Only the Fiero was different. 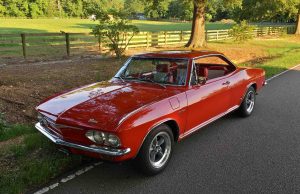 But it was too little, too late – a common problem with General Motors. Other examples include the second-generation 1965-’69 Corvair – which was restyled and re-engineered to be the sporty car the original ’59-64 model wasn’t – the Cadillac Allante of the early ’90s, which was an ok car the last year they made it.

Despite the major improvements, the market had turned for good against the “proud one” – as the Fiero was also known. Sales ebbed again, down to 39,571 – of which about half were V6 GTs or Formulas. 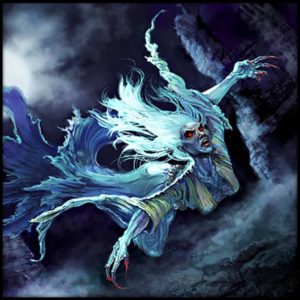 This was the banshee – in the literal meaning of the word, which in old Irish means a shrieking harbinger of imminent death.

Although there were plans in the works for a second generation Fiero – possibly with a new DOHC engine – things never got further along than a styling buck/advanced prototype which was never shown to the public until many years after the Fiero’s cancellation after the ’88 model year. It’s too bad potential buyers never saw it – because the prospect of a DOHC or turbo V6 Fiero with more than 200hp (and even a possible V8 option) might very well have jump-started enough enthusiasm for the car to persuade GM management not to pull the plug.

But GM management GM had lost faith in the car – while GM’s Chevy division probably cared very much about the possibility of a Pontiac competitor that might have been faster and better handling – as well as less expensive – than the Corvette. Much like the XP-833 might have been, three decades earlier. 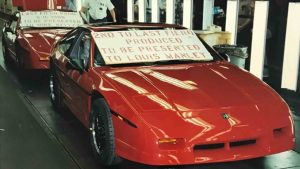 Perhaps saddest aspect of the Fiero’s short life is  that shortly after GM decided the Fiero had no future, Mazda brought out the Miata – a fun and very affordable little roadster that was everything the Fiero might have been – and almost was. That’s the tragic element underlying the story of this car.

The Fiero could have evolved into one of the world’s greatest affordable sports cars. It had many of the right ingredients – from its mid-engined layout to its American Ferrari styling.

But it was pushed into an early grave by short-sighted management decisions that fatally compromised the car before the first one was ever sold.