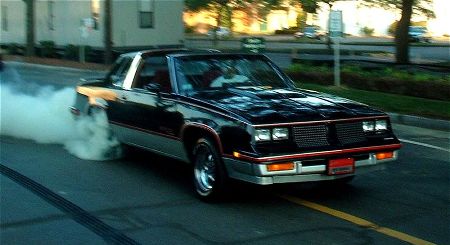 Oldsmobile had a long and distinguished history—and suffered a slow, painful death. 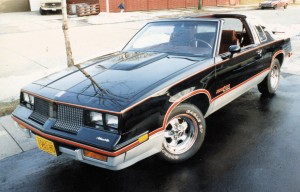 The process of mortification began in the early 1980s, when General Motors gutted the formerly independent engineering departments of each of its seven car divisions. They eliminated the Buick, Pontiac, and Oldsmobile-built engines that had made each of these divisions’ cars unique, not just “badge-engineered” clones of one basic model fitted with a different grille and set of wheel covers.

By the end of the decade, all GM divisions would share identical “corporate” engines built by a new entity, GM Powertrain.

Pontiac was the first to go; after 1981, it was no longer allowed to build its own V-8s and had to install Chevy-sourced engines in its cars, including the Firebird—which was thus rendered nothing more than a slightly stylized Camaro. Pontiac ceased to be anything more than a hollowed-out marketing division for generic “GM” vehicles, functionally identical to other GM cars. 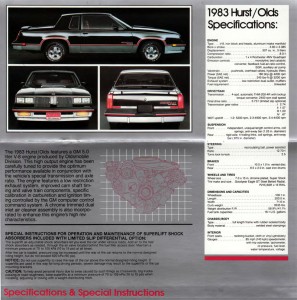 Oldsmobile’s trip to the glue factory began with the 1983 and 1984 Hurst Olds (and the similar 442 that ran from 1985 to 1988). Reaching back to the company’s salad days in the late 1960s and early 1970s, Olds product planners tried as best they could for one last hurrah before the ax fell—returning two well-respected muscle car designations to the lineup as an option group on the still-rear-drive (but not for long) Cutlass coupe.

The 1983 and 1984 Hurst Olds had an attractive black with silver and red accents paint scheme and was specially-equipped with an aftermarket-style Hurst “Lightning Rod” three-handled shifter: one stick for each forward gear. This was a bit much for a car with just 170 horsepower, though. But it was a good try, in very trying times. The little 307 V-8 wasn’t much compared to the 455 Rocket and W31 high-performance engines of Oldsmobile’s better days gone by, but it was at least an Oldsmobile-built engine and as it turned out, the last of its kind. Tied to 3.73 rear gears, it was still possible to do a decent burnout in a Hurst Olds or 442—if you power-braked the car or found a puddle to wet the tires a little.

Pedal to the floorboards, the car took about 8 seconds to get to 60 MPH and cleared the quarter-mile in just over 16 seconds. 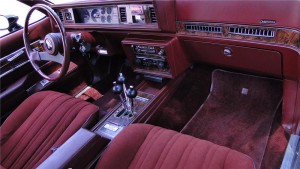 About the same performance as a 2015 Honda Fit – while using about twice as much fuel.

From 1985 through 1987, the basic Hurst Olds package continued but was now called the “442,” in reference to the 1960s-era Oldsmobile muscle car of the same name. Back then, the acronym was short for four-barrel carburetor, four on the floor (a manual transmission), and dual exhausts. The 1985 to 1987 442 did have a four-barrel carburetor, among the very last of GM’s Rochester Quadrajets to be installed by the factory. But there was no manual transmission, the dual exhausts were as fake as Pamela Anderson (as a result of the single pellet-style GM catalytic converter), and the car’s performance was as sickly as the Oldsmobile brand itself.

It should have come with its own IV stand. 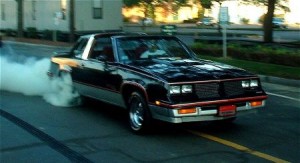 On the other hand, these cars began to look much better after Oldsmobile switched over the front-wheel drive after 1987 and no longer offered the enthusiast buyer anything more meaty than a transversely-mounted V-6 in a re-badged GM-generic Buick/Chevy/Pontiac/Olds clone-mobile—the “gutless” Cutlass.

The market passed judgment harshly and quickly. Olds itself ceased to be just after the turn of the century and now it, too, is just a memory. 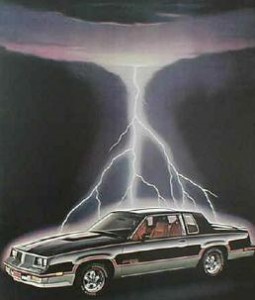 * No other production car after the Hurst Olds was ever offered with the Hurst “Lightning Rod” triple-tree shifter as a factory-installed option.

* In 1984, the two-tone paint scheme was reversed; silver on top of black instead of black on silver.

* Four custom-built Hurst-Olds were made in 1988—even though Olds had switched over to a new, front-drive platform for the Cutlass. These cars all had unique “Aero” rear window glass and “ground effects” body kit and were the last Hurst-Olds models made.

They were also the last rear-drive, V-8 coupes Oldsmobile would build.

Excerpted from Automotive Atrocities, The Cars We Love to Hate.