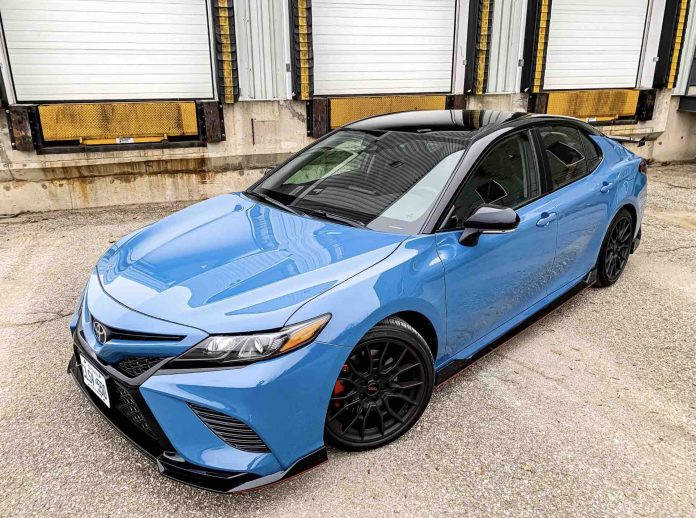 You can still get a V6 engine in Toyota’s Camry, which is the only remaining mid-sized/family-priced sedan that offers more than a four. Engines larger than that have become a rarity – in a class of cars where V6s were common as recently as five years ago.

Those who follow this heretical column know why this has happened.

The government’s continual ratcheting up of federal fuel economy mandatory minimums (CAFE) and “greenhouse gas emissions” regulations have made it very difficult – very expensive – to put more than fours in most cars, even ones that cost a lot more than a mid-sized family car like a Camry does. If you shop around the mid-sized luxury sedan class, you’ll see that even in that class, V6s are becoming both rare and very expensive.

So, it’s really good news – if you want more than just a four – that the Camry still offers that option.

But probably not for much longer.  The current model is going on five years old – so a makeover is likely coming next year or the year after.

After which, the Camry may no longer be available with more than a four – just like all the others in this class. 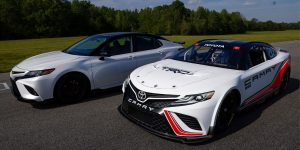 The Camry is Toyota’s mid-sized/family-priced sedan, similar to others in the class like its main rival, the Honda Accord – as well as the Mazda6, Hyundai Sonata and Kia K5.

It differs from all of them in that none of them are even available with more than a four, anymore. The Mazda6 soon won’t be available, at all. It’s been cancelled due to lack of interest – perhaps because it no longer offers more than a four.

The Camry also offers something else that’s remarkably rare in this class, all-wheel-drive. 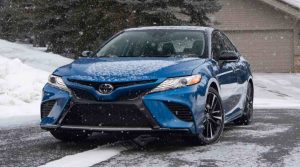 Just not with the V6.

Prices start at $25,845 for the base LE trim, which comes standard with a 203 horsepower four cylinder engine; AWD is available optionally. So equipped, the price rises to $27,245.

From there you can select from SE, SE Nightshade, XLE and XSE trims – all of which come standard with the same four and the option to get AWD. You can also option the XLE and XSE trims with a 301 horsepower V6, which bumps the price up to $35,070 and $35,620 respectively. 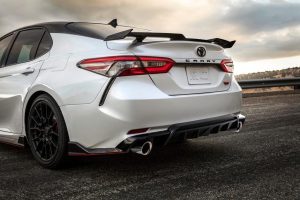 There is also a way to get the V6 for a bit less – along with some more of other things to go along with it. The TRD trim, which stickers for $32,910, comes standard with the V6 and a more aggressive look, to go along with it. It also has a firmer-riding suspension, sport-tuned exhaust, a rear decklid spoiler and red seatbelts.

This year is a carryover year for the Camry and possibly the last year for the current model before the next major makeover. 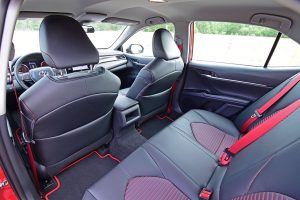 Standard four makes more than 200 horsepower, without a turbo.

TRD version doesn’t get a more powerful version of the V6.

Rival Accord has a roomier back seat.

It’s not just the availability of a V6 engine that makes the Camry unusual – unique – in its class. It is also that its standard four cylinder engine isn’t turbocharged, as the smaller fours that come standard in rivals like the Accord and Kia K5 are.

Which they need to be, in order to make up for the fact that they are more than just smaller.

The Accord’s standard four displaces just 1.5 liters; the Kia K5’s just 1.6 liters. There are motorcycle engines that are bigger than they are. In contrast, the Camry’s four displaces 2.5 liters, a size more appropriate for a car. 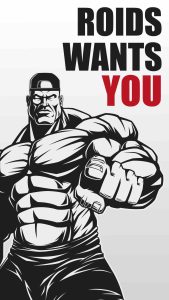 In particular, a mid-sized family car.

Interestingly, the Camry’s four not only makes more horsepower without  relying on a turbocharger to boost its output, it also delivers the same or better gas mileage than its smaller-engined, turbo-boosted rivals.

So there’s no fuel-efficiency benefit to be had from these smaller, less powerful engines. But there could be a very big benefit to not having a smaller, turbo-boosted engine.

That being engine longevity.

The Accord and K5 engines are under a lot of pressure, literally. The turbo boost imparts stress to internal parts such as bearing surfaces, which are also smaller in smaller engines, so the load they must bear isn’t distributed over a larger area. Turbo’d engines also run hotter, which works the cooling system (including the oil) harder. 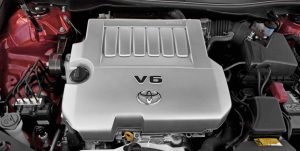 Plus, there is the turbo, itself – an expensive part that may have to be replaced at some point down the line. The Camry’s four is under less pressure. Its bearing surfaces are also larger, so they have more area to absorb the lighter loads placed upon them. This is the recipe for longevity. And you will never have to worry about the expense of replacing a cooked turbo.

Then there’s the Camry’s available V6, 3.5 liters and 302 horsepower. This engine completely outclasses the Accord’s optional (2.0 liter) four, which only makes 252 horsepower. The Kia K5’s optional 2.5 liter four comes closer, offering 290 horsepower. But in order for this small engine to post a big number, it also requires boost – and the pressure that comes along with it. 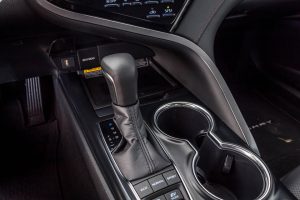 Maybe it won’t affect longevity. But it’s established fact that the Toyota 3.5 V6 is one of the most long-lived (and reliable) engines ever put under the hood of a car. The Honda Accord used to have an equally brilliant V6, too.

It’s a shame it longer does.

And: Both of the Camrys engines are regular fuel (87 octane) engines. Turbo’d engines often need premium to produce their advertised horsepower. It’s a kind of horsepower tax you pay at every fill-up.

An eight speed automatic transmission is standard with either of the Camry’s two available engines – and the four is available with all-wheel-drive, giving the Camry another desirable feature availability that isn’t available with the Accord, which is front-drive-only. The Kia K5 is available with AWD – with its standard (1.6 liter) four cylinder engine. Like the Camry, it does not offer AWD with its optional (2.5 liter) engine.

V6-powered Camrys are front-drive-only, too.

How far have we come? One way to measure that is to ask – how fast does it go?

Equipped with its available V6, the Camry is capable of getting to 60 MPH in just over five seconds and through the quarter mile in the high 13s. These are quicker times than those posted by V8-powered muscle cars like the Ford Mustang GT as recently as the early 2000s – and much quicker times than most V8 muscle cars of the ’60s posted.

None of them got 33 MPG on the highway, either.

The V6-powered Camry does. 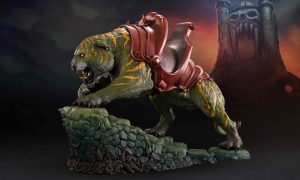 And it does it with a 2.56 final drive ratio. Most muscle cars had 3.23 (or greater) ratios, to get them going quickly. It also had them guzzling a lot, quickly.

The Camry doesn’t. Remember: This is a family sedan, not a muscle car. It does not idle roughly or tend to overheat, as muscle cars often did. It is easy to drive, too – as muscle cars generally weren’t.

It’s a pussycat, in fact – until you ask it to roar.

The four isn’t far behind, either. It gets the Camry to 60 in about 6.6 seconds, which (again) would have been regarded as a very respectable time for a V8 muscle car, back in the days of the V8 muscle car. The almost 40 MPG you get on the highway is easily twice what V8 powered muscle cars managed, too.

We have, indeed, come a long way. 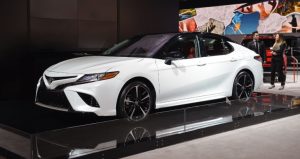 It’s just a shame that it’s all going away. Toyota is the last holdout. The last major automaker to not have given up on big engines in mid-sized family cars  . . .  and that hasn’t turbocharged very small engines, to make up for their tiny size. Probably because Toyota knows its buyers esteem the proven track record of reliability and durability established by its V6 and no-turbo four cylinder engines – and that trying to sell them lesser engines (literally) that offer no tangible fuel efficiency or power benefit that may not be reliable or durable after the warranty runs out is not sound policy.

Besides: Without that V6 – and with a turbo’d four – the Camry becomes just another car in this class, rather than the only car of its kind in the class. 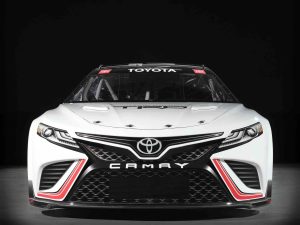 One of the Camry’s greatest virtues is its quiet looks. It does not look like the muscle car-killer it is – or can be, if the mood strikes. It is the kind of car that does not draw attention to itself – unless you want to draw attention to yourself.

In that case, there is the TRD version of the Camry.

TRD being the acronym for Toyota Racing Development.

This version of the Camry looks a lot like the version of the Camry you can see on the track at Nextel Cup races. That Camry has a V8 – and is rear-wheel-drive. But the visuals – and the attitude – are not dissimilar. It sits lower than other Camrys – and it has a chin spoiler and rear-decklid wing to further make that ready-to-roll statement. 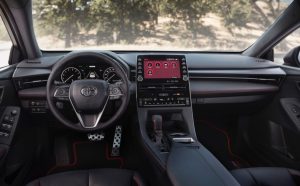 Oddly, there’s no additional go to back up the additional show. The TRD iteration of the Camry comes with the same V6 that’s optional in the more demure-looking XLE and XSE iterations – although it does sound tougher, on account of a less-muffled exhaust. And there is a lot of potential for more go locked up within that V6.

But it’ll be up to you to unlock it.

All Camrys come with ample room in front and back – an important consideration for a family car. There’s 42 inches of legroom for the driver and front seat passenger and 38 inches for those in back. 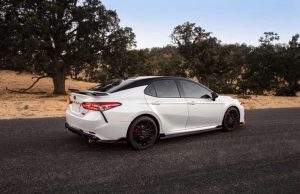 The Accord has a little more room in back (40.4 inches) but it’s not a big enough difference to make all that much difference. There is, however, a lot of difference vs. the Kia K5, which has the most legroom up front of the bunch (an astounding 46.1 inches) but that comes at the cost of a significantly less roomy back seat (35.2 inches of legroom) than the Camry and Accord offer.

The Camry’s 15.1 cubic foot trunk splits the difference between the Accord’s class-biggest 16.7 cubic footer and the Kia’s 16 cubic-footer.

All Camry trims come with a package of “driver assistance technology,” including Lane Keep Assist and Braking Assist – but the systems aren’t as peremptory as is often the case in other cars. All trims also come standard with adaptive cruise control, which is a useful feature that’s nice to have – especially since Toyota doesn’t make you buy a more expensive trim in order to have it.

If, however, you’d like to have heated seats and wireless charging, you’ll have to step up to the XLE or XSE trims. 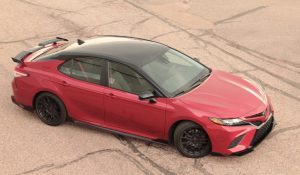 Family cars like the Camry were once as prolific as dandelions after a summer downpour. Now the Camry’s the only bloom left, after the deluge.