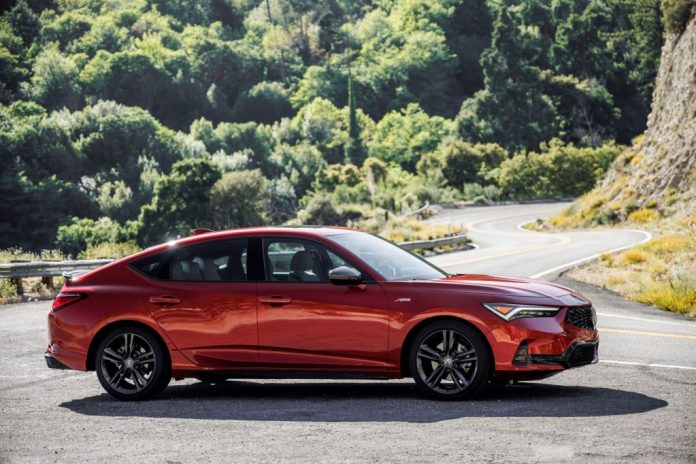 Certain models define a brand. What would Chevrolet be without Corvette? Ford – without the F150?

Acura once had a model like that. The Integra.

And now it does, again. 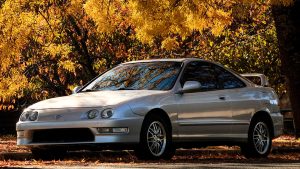 Both cars are similar mechanically, being powered by the same 200 horsepower 1.5 liter turbocharged engine, paired with a six speed manual transmission or a CVT automatic – but the Acura version is (interestingly) a five-door hatchback while the Civic Si is a four-door sedan.

It’s interesting because the hatchback layout nearly doubles the Integra’s available space for cargo – making the Honda the less practical car of the two. 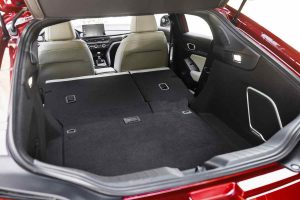 Ordinarily, you’d expect the reverse to be the case.

But – in this case – Acura needs the new Integra to be practical as well as appealing on performance grounds, because Honda sells nothing other than practical cars (including the non-Si version of the Civic, which is available as a five-door hatchback). 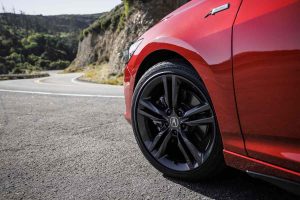 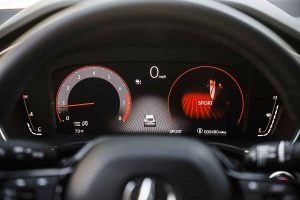 The Integra returns after a 22-year hiatus. Seventeen, if you count the years (2002-2006) during which the Integra was sold as the RSX.

A more practical version of the Civic Si.

Available with a manual transmission.

A more expensive version of the Civic Si.

No more engine than you get in Civic Si.

Manual only available in most expensive A-Spec trim – and then only if you add the Technology Package, which bumps the MSRP up to $35,800. 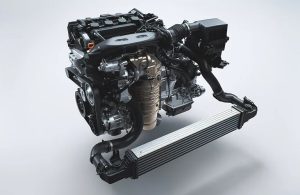 Like the Civic, the Integra comes standard with a 1.5 liter four cylinder engine that’s been turbo-boosted to make 200 horsepower.

To gain some perspective, have a look at the specs of the last (2001 model year) Integra, which came standard with a larger 1.8 liter engine that made . . 140 horsepower. To get close to the output of the new Integra’s standard engine back in ’01, you’d have had to buy the highest-performance version of the old Integra, the GS-R.

And that only got you 195 horsepower – as well as just 128 ft.-lbs, of torque. The latter not until you raced the engine to 6,200 RPM, which is close to the redline of the new Integra’s engine.

The new Integra’s 1.5 liter engine makes 192 ft.-lbs. at just 1,800 RPM. Chiefly because it’s turbocharged, which swells torque production at low RPM. This makes it a very different engine vs. the old Integra’s engine, which was designed to be a high-RPM engine and relied on airflow at high RPM to make power – to make up for the torque it didn’t make.

That made it a high-strung engine you had to work to get it to perform – and it is one of the appeals of the old Integra, to those who enjoy a car that begs to be worked.

The new Integra will appeal to those who like a quicker Integra – with less work. It gets to 60  – with the six speed manual transmission – in the same 7 seconds it took the highest-performance ’01 Type-R to make the same run. It is much quicker than the standard-engined old Integra.

The catch is that – unlike back then – you can only get the manual with the A-Spec equipped with the Technology Package whereas back in ’01, the Integra GS-R came standard with a manual.

And that means having to spend $5k more to shift for yourself, today.

However, if you go that route, you won’t be able to get the adaptive dampers that are standard with the A-Spec Technology Package – or the extra space (for cargo) that comes standard with every Integra.

And the Integra is just about the only car of is type you can still get with a manual, at all. Other than a Civic Si. 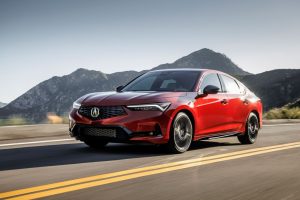 This car is a study in contrasts.

It is a much easier car to drive – fast – than the old Integra was. It is not necessary to keep the revs up, to always be in the right gear for the moment – because the torque is always there.

That is what makes it comfortable to be in almost any gear, almost any time. It’ll get going faster if you drop down a gear but – unlike the old Integra – it doesn’t bog if you don’t.

On the other hand, it’s less exciting to drive this Integra than the old one. Driving that one was a lot like riding a two-stroke motorcycle with no power at first . . . and then.

That happened at around 5,000 RPM in the old Integra GS-R, which was when the VTEC (variable valve timing and lift) system wide-opened those swirl-polished valves and great gulps of air were inhaled – and exhaled. This engine would spin to more than 8,500 RPM before it hit the rev limiter. 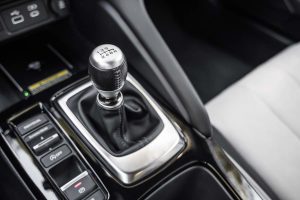 The New Integra’s engine redlines at 6,500 – and revving it even that high isn’t necessary to wring every last bit of power out of the thing. Which is a good – or bad – thing, depending on how you feel about it. Functionally, it’s difficult to complain about it, given that the new Integra – all trims – matches the performance of the highest-performance version of the old one.

One thing that is very much the same – and very good – is the feel of the manual transmission. You get six rather than five speeds now, so there’s tighter spacing than before – but the precision ratchet action of the shifter is as delightful now as it was back then.

There is also the option to not shift – which Acura did not offer back in ’01 (with the GS-R). You had to shift for yourself. Probably, in part, because the high-strung VTEC engine in the old Integra GS-R didn’t make enough torque to work acceptably with an automatic. 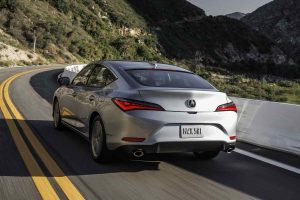 The new Integra’s automatic doesn’t shift, either – being a CVT. It does emulate them, though. And you can control the timing of “up” and “down” shifts (within the programmed parameters). Honda was one of the first car companies to mass-market CVT automatics and not surprisingly builds good ones, both in terms of their operating characteristic and durability.

It “shifts” quickly and seamlessly; you can do a full-throttle 0-60 run without spilling your coffee. It’s also the easier version to live with in traffic, although the lightweight flywheel that you get with the manual combined with the easygoing nature of the turbo 1.5 engine make that version of the Integra almost-equally easy to live with in traffic. 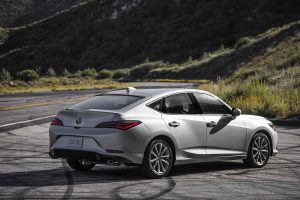 Either way, the new Integra’s got the right-now (and right there) steering feel (2.29 turns, lock-to-lock) that made the old Integra so popular – along with a far more forgiving ride. Even more so, if you get the A-Spec and the adaptive dampers that come with the Technology Package.

Back in ’01 – 21 years in the rearview! – you had to accept a firm-to-harsh ride as the price of owning a car that could really corner. Which was fine when you were cornering. But when you weren’t, you felt everything.

And it still corners, too. 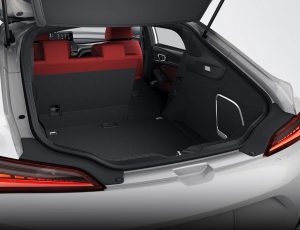 The Integra is dimensionally almost identical to the Civic Si sedan that it is under its skin.

Both are compacts about 185 inches long. The meaningful difference between the two is that the Integra – being a hatchback – has room for nearly twice as much stuff (24.3 cubic feet) as the Civic sedan (14.4 cubic feet). That difference is more meaningful than the numbers convey, too – because of the fact that the Integra’s hatchback opens-wider than the Civic’s trunk and because the Integra’s layout makes it feasible to use most of the rest of the interior as continuous cargo space, too.

You can, for example, run a few 2x4x8s up into the front passenger seating area (assuming no one’s sitting there) and while it might sound strange to think of using a car to cart home a few 2x4x8s that is precisely the point. Particularly in the case of compact-sized cars like this one – which are pretty impractical cars when they are rendered as sedans – with tiny trunks – rather than hatchbacks with “trunks” that are much more . . . practical. 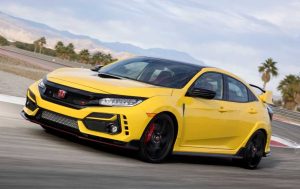 Another practical aspect of the Integra vs. the Civic Si is that the Integra looks subtler than its more notorious brother.

It is ready for the same kind of action, but is more likely to get away with it.

There is plausible deniability in the Acura. In the Civic Si, don’t even bother feigning innocence when Officer Not-So-Friendly catches you in the act. 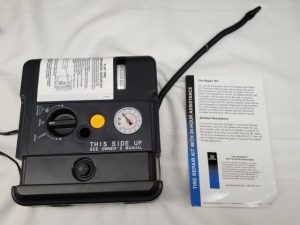 One less-than-practical aspect of both the Integra and the Civic Si is that neither comes with a spare tire.

Instead, there’s one of those “tire repair kits.” Which won’t repair a sidewall tear. These only repair tread punctures, as by a drywall nail you ran over. But if you pop a curb and blow out the tire, you’re out of luck. Time to call a truck. Acura/Honda (and many others) use these kits in lieu of spares because the kits take up almost no room in the truck or under the trunk floor – whereas even a skinny “space saver” takes up a lot, as well as adds weight.

Inside, interestingly, both cars are essentially identical – other than the Acura having somewhat nicer materials, especially the A-Spec. It’s attractive and functional, either way – as is usually the case with Honda/Acura vehicles. The problem – for Acura – may be persuading buyers that the differences are worth Acura rather than Honda money. 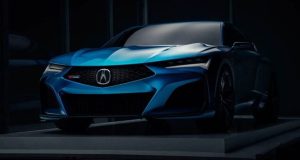 Honda has a Type-R version of the Civic Si on the pipeline that’s packing a larger, 2.0 liter engine and more than 300 horsepower. An Acura version of this most-ferocious-ever Civic is likely on deck for 2024, too.

Nothing’s ever the same as it was.

But it’s nice that you can get something similar, again.