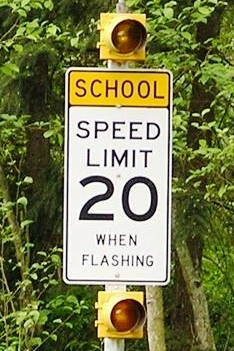 Maybe this bugs you, too?

There’s a “school zone” ahead and – clearly, obviously – there are no kids about. But the DANGER! DANGER WILL ROBINSON!!! flashing lights are on anyhow – probably because they’re on autopilot and set to go off at a certain time each day even if school is closed or it’s the weekend.

And – boom! – the guy ahead of you slows to a crippled crawl. God knows, there might be a sainted child within a 5 mile orbit and he just might run into the road. Even though of course, there’s not. The parking lot’s empty and the school’s as dead as Grant’s Tomb.

No one uses judgment anymore.

For 99 percent of drivers, the mere mention of children is enough to throw their safety fetish into overdrive. The reflex is as conditioned as the drooling of Pavlov’s dogs. No using their eyes (and brains) and deciding, ok, it’s obvious school’s closed. No kids around. It’s probably ok to go faster than 15 MPH (assuming no cops are around).

The sign is there; the lights are flashing. And that triggers the response:

Maybe I’m just a member of the last generation that didn’t consider “the children” the central organizing principle of society – and the knee-jerk excuse for endless petty tyrannies, from mandatory seat belt laws to these over-the-top “school zone” crawl zones.

Faberge eggs are juggled by drunken clowns compared with the suffocating envelope of safety we envelope “the children” in – and also any unlucky adults who happen to be nearby.

It’s mostly because of “the children” that all of us now have to pay (according to most estimates) $500-$1,000 more for a new car, because new cars all have to have air bags – and air bags make cars “safer” for “the children.”

It’s mostly because of “the children” that we have these noxious “buckle-up” at gunpoint laws that have given the Polizei legal cause to harass you in your own car simply for not wearing your seat belt. It’s not going to be long before they start making us eat our veggies, too.

It is a Major Event when a school bus picks up or drops off a sainted child. Many flashing lights – including, lately, strobe lights on the roof of the thing – plus a fold-out STOP! sign that (you guessed it) folds out most imposingly as the bus comes to a stop. At which point, all within a mile orbit of the yellow carriage must also come to a stop. It’s almost as if the presidential motorcade had arrived and the Great One is about to step out for a wave at the masses.

All wait, hushed in awe.

Meanwhile, back in the Gen X days of the ’70s, school busses were driven by salty old ladies who either smoked or drank (sometimes both). They were not especially enamored of us – the children – and neither were most adults. We did not call our parents’ adult friends by their first names; we didn’t monopolize the conversations, either. In fact, we were likely told to “go do something” and leave the adults the hell alone. We often actually walked – gasp! – unsupervised (gasp again!) from the bus stop to our house. Hovering pahrunts were not immediately and always there in an SmooooVeee to scoop us up and make sure we got home (safely) so that we could sit in front of some idiot Pixar droolfest for the next two hours. Instead we played some pick-up football, rooted around in the woods… or something – on our own initiative, no coaches or orchestrated uber-organization required.

And when we got picked up in the Vista Cruiser, we just hopped in the back and rode (or rolled around) unbuckled all the way home. Can you imagine it? None of this business of strapping eight and nine-year-olds into “safety seats” like pint-sized Hannibal Lecters. And somehow, we survived this (by modern standards) horrifically unsafe environment of neglect and indifference.

School zones existed but they weren’t Sacred Zones, as they are today.

No metal detectors; no calling the cops because a 12-year-old pointed his fingers at another kid and said Bang!

What the hell happened? And can we throw this thing into reverse?

Would You Buy a Used Car From This Man?