Interstate seemed like a sure-bet winner. The basically identical GL500 had been successful for several years prior and before the GL, there had been the CX – the first of the series to use the transverse “twisted” 80 degree pushrod V-twin, which was (being a Honda) a better-engineered, better-built and more potent loose copy of Moto Guzzi’s engine of similar layout.

The only real complaint leveled at the GL500 Interstate – the touring version of the GL Silverwing, with suitcase-style hard bags and a full fairing just like the Goldwing’s – was that the 500 cc twin could maybe use some more power.

The GL650 provided exactly that – plus some more besides.

For starters, the updated twin had more CCs – 673 of them, despite the “650” badges on the engine cases – and 64 hp vs. 50 for the 500 cc twin. But this wasn’t just a quickie bore and stroke job. The “650” CC engine was completely re-engineered to handle the higher power output. The connecting rods, rod bolts and main bearings were all upgraded. Cylinder studs are beefier. A finned, bolt-on oil pan was added to increase total oil capacity to 4.1 quarts. The intake valves in the “650’s” heads are larger – though exhaust valve diameter remains the same.

The cooling system got a thermostatically triggered electric fan while improvements to the case design made servicing the water pump much easier. There was also a new maintenance-free automatic cam chain tensioner system. 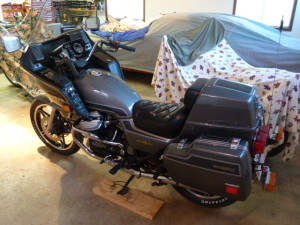 A new cam profile with increased lift and duration brought the power peak down to a more accessible 8,000 RPM vs. 9,000 RPM in the 500. Compression was actually lowered a bit – to 9.8:1 from 10:1 – but the four-valve head and all-alloy construction let this engine run happily on 87 octane regular unleaded. It was easy on gas, too. Hard to get less than 50 MPG, no matter how hard you rode it.

Though subtle, the differences between the 500 CC engine and the new “650” could be discerned before you even started it up.

First, the engine was painted semi-gloss black while all 500 CC engines left the factory in natural aluminum. A closer look turned up other points of departure. For example, the shape of the cam covers; the “650’s” are unique to this engine. Also, the intake tubes are different; they’re shorter – and straighter – designed to improve flow. The airbox is larger, too. And the carbs. The “650” received a pair of 35 mm Keihin CVs vs. the 500’s 34 mm units.

The “650” also has a new-design transmission with different ratios that help it get slightly better gas mileage than the 500 – despite the extra displacement and additional 14 hp.

Other updates/differences that distinguish the one-year-only 1983 GL650 include larger diameter 37 mm front forks (500s had 35 mm forks) and higher-rate springs, along with steel frame tubes that were bigger and stronger than the ones used for the 500s.

That’s the history. What about The Experience?

After about 10,000 miles of seat time on my personal GL650 – and having ridden a friend’s GL500 for comparison – I can report as follows:

The first thing you notice is how light the bike is. It has a curb weight just over 500 pounds, or not much more than a current-year standard without any fairings at all – and hundreds of pounds less than a new Goldwing. It’s an easy bike to “walk” in close confines, such as trying to fit it into a spot in your garage. And it is an easy bike to ride at a fairly aggressive pace, too – if you want to do that. Though you sit high in the saddle, you can still squeeze the tank between your legs, shift your weight down onto the pegs and heel the thing over to fairly aggressive lean angles. The limiting factor here is clearance – which you’ll run out of long before you exceed the bike’s safe limits.

But sparking the pegs can be fun, too!

The suspension features air-assist on both ends – with Honda’s Pro Link monotube shock in the back. After some experimenting, I settled on about 15 psi in the front forks and 60 psi in the rear as the optimum combo for my weight and comfort level. The thing is, you can easily tailor this bike’s settings to your size and preferences – all without any tools (other than an air supply). Some road tests from “back in the day” say the 500s rode softer/nicer than the supposedly stiffer “650’s.” I didn’t notice this. My guess is it comes down to “tuning” more than anything else.

The big difference – the noticeable difference – is power. And how that power is delivered. The “650” is much stronger feeling, both off the line and in the middle ranges – though the 500 has a higher redline and seems to enjoy being spooled up a bit more than the “650” does. For a larger rider like me, however, the extra power makes the “650” a much more enjoyable ride. For two-up riding, the “650’s” additional 14 hp is arguably essential. It not only accelerates better, you have the extra margin to safely pull out and pass at say 60 MPH – and reserves enough to comfortably maintain 75 mph (essential for any serious highway work nowadays) with the tach reading about 5,000 RPM – a bit more than halfway to redline at 9,500.

Which is why it’s so surprising – so sad – that this much-improved Silverwing turned out to be a one-year-only deal. It has the power – and the legs – to operate as a long-distance tourer. Yet it it also nimble enough (and economical enough) to serve as a commuter, too.

Uncle Sam clipped the Honda’s ‘Wings. And everyone else’s too – if you happened to not be Harley Davidson, that is. In ’82, Harley was on the way out. It had filed for bankruptcy protection – which it needed because Honda and other Japanese imports were eating HD’s overpriced (and much less reliable) lunch. Imports had captured 60 percent of the domestic “heavyweight” motorcycle market; by 1982, this had jumped to a staggering – for Harley – 69 percent.

In stepped The Gipper to save HD – by punishing the Japanese.

Import duties on Japanese bikes were jacked up to a confiscatory 45 percent in – you guessed it – 1983, the year the GL650 was introduced. New Japanese bikes got more and more expensive; inventories began to stack up. It saved Harley – but it killed the ‘Wing. Honda cancelled the bike – no doubt in part because of the “Harley Law” that made it increasingly uneconomic to manufacture it. The high tariff erased the bike’s former price advantage, which in turn made all the improvements Honda made essentially moot.

The main beneficiary of the kick-in-the-balls tariffs – other than Harley Davidson – turned out to be people like me who acquired a used ’83 ‘Wing many years later. The RR-era tariff penalty was long gone – paid by the unfortunate original purchaser. But the bulletproof ‘Wings outlived the Gipper – and most of the Harleys built during those years, too.

Many are still out there today – 30 years later and still going strong.

One of them is sitting in my garage, right now… .

If you’re looking for some fun ways to spend your time, why not check out Slots Mummy.