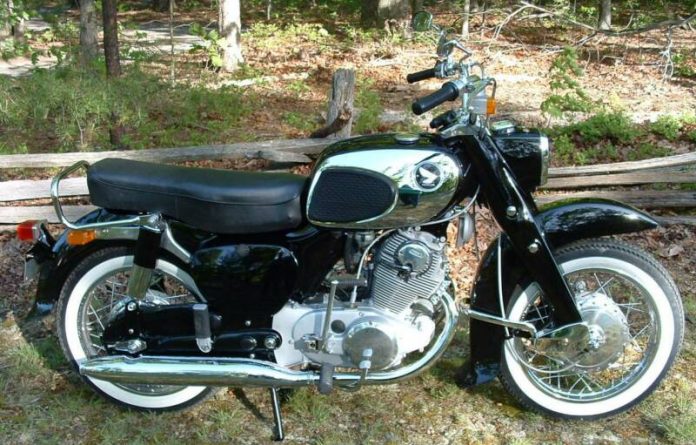 Instead of watching  “the game,” I went for  a ride this past Sunday.

My friend Graves owns several antique bikes, including a very nice – and road ready – ’67 Honda Dream. Many of you know about this bike – it’s the one Honda used to both establish itself in the U.S. market and also to almost singlehandedly change the public perception of bikers and motorcycling.

Remember the ad campaign? You meet the nicest people on Hondas.

Not just Marlon Brando types on BSAs and Hell’s Angels on Hogs. 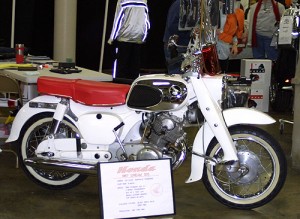 The Dream helped popularize motorcycling and expanded its appeal to middle class America, much like Arnold popularized weight training. Arguably, it is the machine that set the stage for all the good stuff we enjoy today: Bikes for everyone – and anyone can be a biker.

It all started here, with the Dream.

So here I am facing a bike that’s now 44 years old – the oldest bike I’ve ever ridden. And it does look old. Many of the parts appear to be stamped steel and heavy. Even the chain is completely covered in a stamped steel casing – to keep oil from getting on those nice people’s clothes, of course!

It has (for a bike) very small wheels – with very skinny tires – and of course, manual (cable-pull) drum brakes on both of them. There are no gauges to speak of; just a single tiny speedometer that sits almost flat ahead of the handlebars. The seat is also flat and very Moped-like. You sit tall – and low. This makes the bike very controllable when it’s not moving, almost impossible to drop. At the time, this probably helped sell the bike to people who had never ridden or even sat on a bike before. 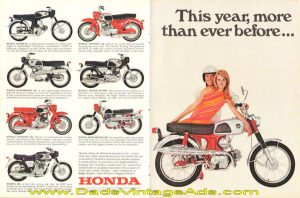 So, too, the electric start.

There’s a kicker also – but you can effortlessly key the twin-cylinder engine to life by turning the key. No doubt, ’60s-era women found this very appealing (while the guys could still do it manually – which no doubt appealed to them).

Now comes the moment of truth. Graves heads out on my ’83 Silverwing.

I prepare to follow, easing the Dream’s no-hydraulic-assist clutch out, anticipating some herky-jerkyiness. But the Dream just glides forward.

The 300 cc parallel twin has decent pull, too. It does not sound old. Twist the throttle and it sings like a modern overhead cam Japanese twin – which is exactly what it is, of course. In addition to the OHC layout, the engine is aluminum with steel liners for the cylinders – a technological Great Leap Forward for the 1960s. It has excellent power – more than some of the bigger CC engines of its time and with superior smoothness and almost no vibration.

I am keeping up with the ‘Wing!

Graves has warned me about the brakes – which are definitely 1960s (no, 1940s) technology. But the rest of the bike feels good. Modern, even. Acceleration isn’t swift but it’s not far off the pace of a late model 200-250 cc bike. The Dream gets itself to 45-50 MPH easily enough and seems comfortable there. Graves says he used to ride this bike on I-95 near Richmond back in the ’70s.

The Dream doesn’t “corner” in the way we talk about bikes today but it does handle ok in the sense that it’s easy to keep it on track and steering is light and easy. It goes where you turn the handlebars, very much like a bicycle. Anyone could ride this bike.

After we stopped I told Graves I thought that if you upgraded the brakes, the Dream could be comfortably and safely ridden almost anywhere except the Interstates. He agreed.

And we both agreed that Honda did a brilliant job designing a bike to get people who’d never ridden – and thought riding was for apes only – to throw a leg over!

So Easy Even a Caveman Can Do It…